It's difficult to come to you with seemingly trivial praise for a local restaurant when the news is a parade of awfulness brought about by our new Cheeto-in-Chief. But one cannot maintain this level of anger and anxiety for four years—the risk of burnout is real. While that's not to offer an excuse for checking out if you aren't checked in in the first place, self care is necessary in order to continue to fight against the fear and prejudice espoused by our upper administration.

So continue to call your representatives, donate your time or money to organizations, and do something kind for a neighbor or friend. But relax for a few minutes, enjoy these pictures of beautiful food, and do something nice for yourself today—ideally something that also supports a local business, since we've got the greatest chance to make a difference in our own communities.

(Side note: can I just add that writing the above was hard for me? I'm much more comfortable with straightforward food talk or snark. But I need to be honest and part of that is getting used to being uncomfortable. After all, no one promised us that life would be 100% comfortable all the time...from discomfort comes learning. Now back to food!)

So, Evo. For some reason, I had an unfair "meh" feeling about Evo, despite never having set foot in the place. From the outside, it seemed kind of corporate, due to its proximity to the new Hyatt (even though the businesses aren't related) and I've grown tired of the trend of small, expensive plates of food.

Combined with a few mixed reviews after its opening, Evo hadn't earned a spot on my "must try" list. Just like you, when I do have the money to go out to eat, I don't want to risk it on a place that may deliver mediocre experience, hence my tendency to stick with a rotation of "tried and true" favorites.

But I ended up really loving Evo, and while the cost of the small plates can add up quickly, I had some solid, delicious food that makes me want to pay the diminutive restaurant a visit again soon.

The seating on the first level of Evo is all bar seating, either along the kitchen or the window facing the street. It's great for people watching, whether that's passersby or the kitchen staff—since the kitchen is completely open and about the size of a walk-in closet. The second floor, a lofted space over the kitchen, is obscured from view from both the street and the restaurant below, so if you're seeking more intimate space (or if you're in a larger party and don't want to sit in a row), then request a table upstairs.

The menu is Lebanese, which has become well-represented in Portland recently, between Tiqa, Baharat, and Falafel Underground.

We started with the tuna, which I probably would have passed over had my dining companion not suggested it. Like...tuna, ginger, scallion, we get it. But there's a reason it's so prolific—it's damn good, and Evo's is no exception. The spicy relish topping and quinoa chips were a nice contrast to the soft tuna.

The cream of sunchoke soup also played around with texture, the pickled sunchoke slices and crunchy crumbs (of what, I forget) topping an impossibly creamy, rich soup. The Brussels sprouts salad's tahini dressing emphasized the nuttiness of the seared vegetables beautifully presented on the ceramic dish.

Another hit was soft gnocchi, tossed with assertively spiced lamb sausage, peppery arugula, garlic, and butternut squash. I wanted to take a deep dive into a bowl of cubed potatoes, chorizo, and a poached egg—a dish that also appears quite at home on the menu at the newly offered Sunday brunch.

The scallop dish didn't receive its proper due, since I was quickly becoming very full. But these scallops replace in my heart the one we lost at Ebb & Flow when it closed. At EVO, the perfectly seared scallops are paired with potatoes three ways—in roasted cubes, pureed and in fritters with lemon and dill.

You can see from the portion of the scallops that the "small plates" can actually be rather large, making dinner at Evo one you don't have to worry about coming away hungry from.

I managed to make room for a scoop of baklava ice cream, which, while I loved the baklava itself, pieces of it throughout the ice cream made it seem icy rather than smooth and creamy, like you'd expect.

All in all, Evo was a hit. Even if you still see Evo as a special occasion place, stop in for one of their speciality cocktails and sample a dish. I bet it'll win you over, just like it did me.

Note: Evo will be closed to update their ventilation system from January 29th until February 2nd. The existing system had created some complaints about the smell/air quality in the restaurant, so they're upgrading it.

Disclosure: I was treated to this meal, but the opinions and words expressed in this post are my own.
No comments:

Tomorrow, the Inauguration Day of He Who Shall Not Be Mentioned, boxes of assorted cookies from over 15 Portland bakers and chefs will be for sale as a fundraiser for Maine Planned Parenthood. They'll be sold at East End Cupcakes, Little Giant, Aurora Provisions, Tandem Bakery, Sur Lie, and Standard Bakery and will sell out quickly, so if you want one, call to reserve yours or head to one of the participating retailers first thing.

I spent yesterday afternoon working at East End Cupcakes, helping to decorate these boob sugar cookies—owner Alysia Zoidis wants to remind you to #gramyourmams. Fuel up on Friday for your marching on Saturday. 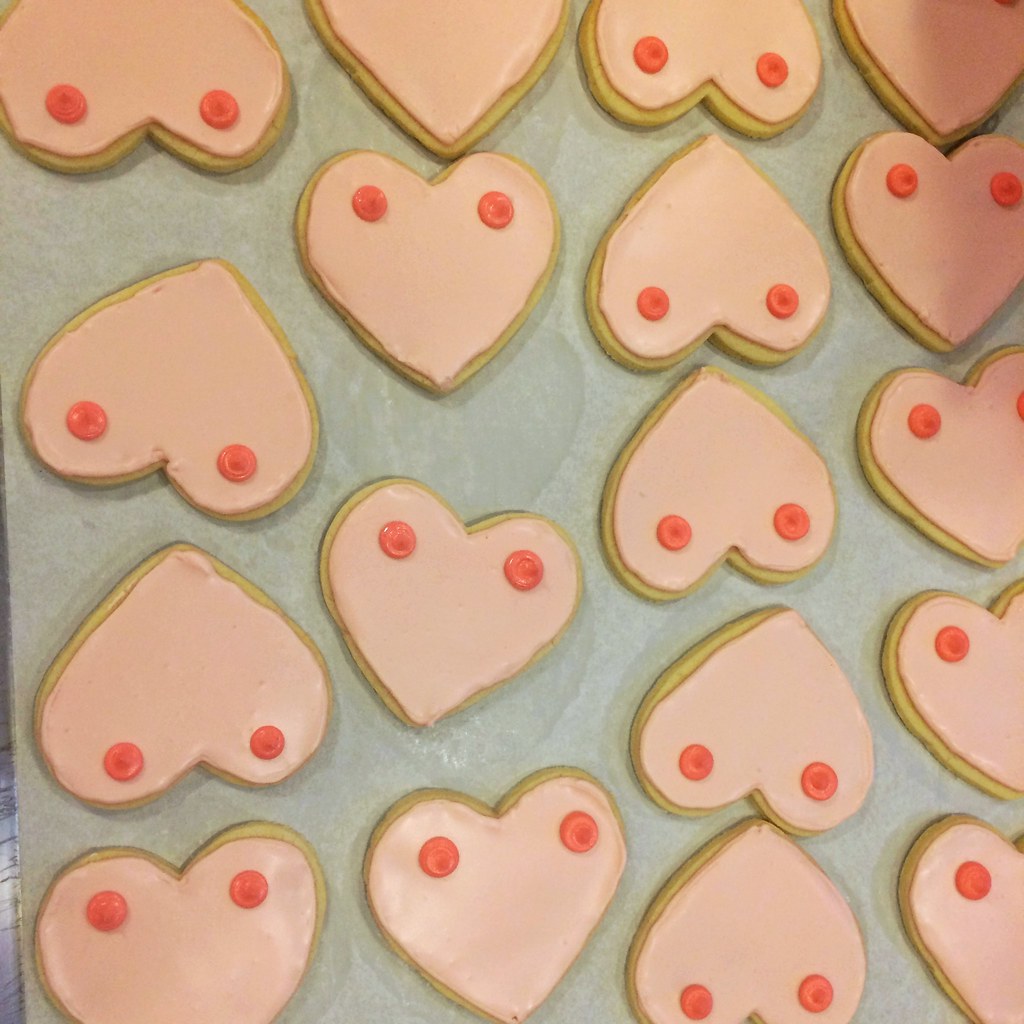 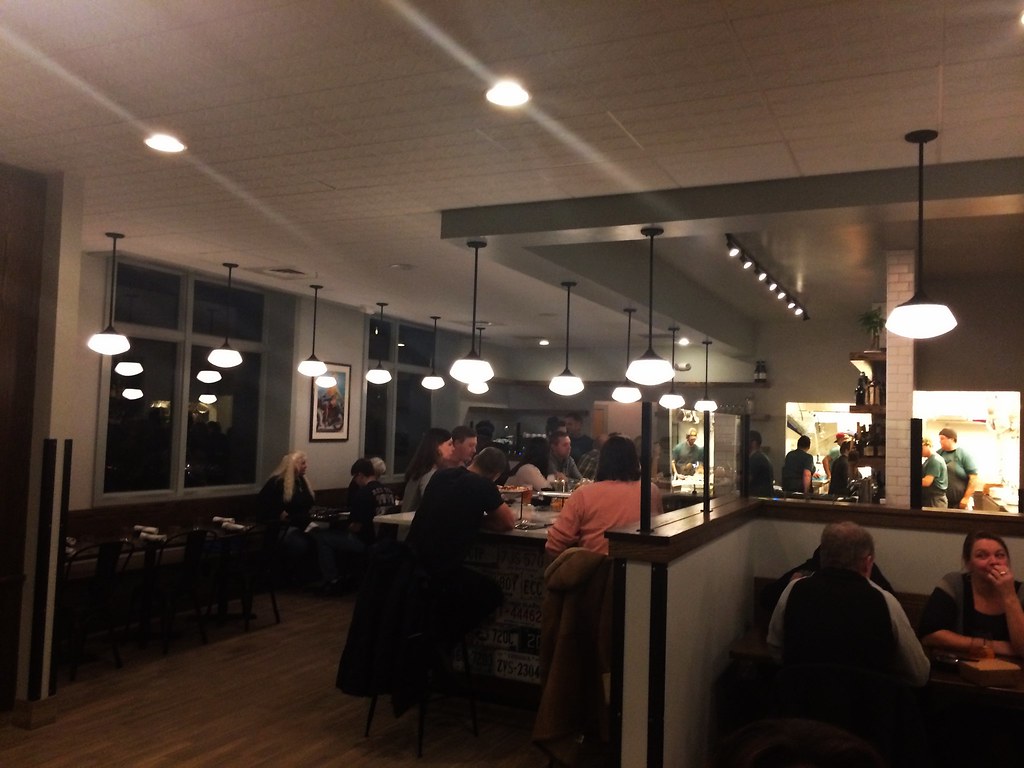 The hostess sat us at a communal table for 10 and we scoped out the wine list. As the restaurant is Italian-themed, it seemed appropriate to order some red wine. I wasn't familiar with any of the wines, so I asked our server for advice, and she recommended her favorite, a delicious Barbera d'Asti ($11).

Other drink choices included Italian bottled beers and cocktails like an Aperol Spritz and the Il Moto with Amaro Montenegro, Cocchi di Torino, Calvados, and plum bitters (admittedly I only know what like 2-1/2 of those ingredients are). 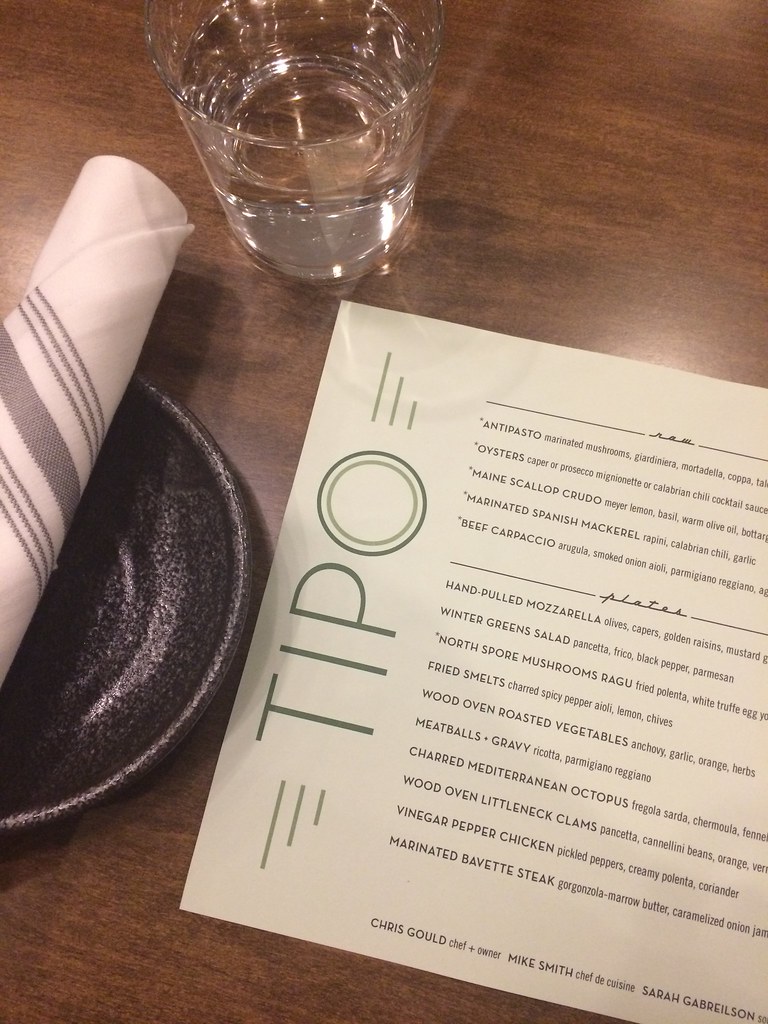 We ordered a few small plates, a pizza, and a pasta dish. Our server informed us the plates come as they're ready from the kitchen, so sharing is recommended.

We started with the marinated Spanish mackerel ($9) served over rapini with Calabrian chili and garlic. The fish was meaty with a nice fish flavor and bitterness from the greens. We also enjoyed the mushroom ragu with fried polenta and truffled egg yolk ($14). It's hard to go wrong with mushrooms and polenta in my book.

The winter greens salad ($8) was also a hit—with pancetta, frico, black pepper and parm, it was much like a Caesar salad. Other tempting starters included the charred Mediterranean octopus, fried smelts, hand pulled mozzarella, and wood-oven littleneck clams.

Shortly thereafter, the pizza arrived. We chose the lamb sausage, feta, za'atar, harissa, arugula variety from 5 choices, with a make-your-own options available as well. The crust was tender and chewy with a nice char from the oven. 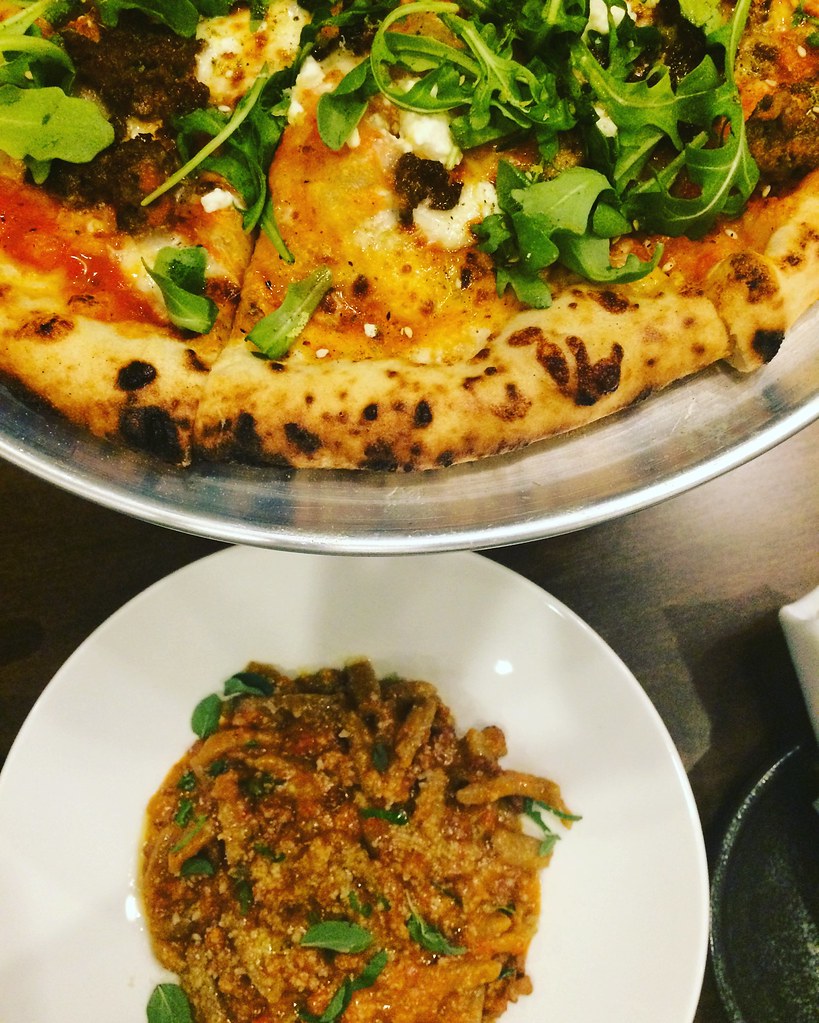 Obviously we had to try some handmade pasta too and debated between the rye cavatelli ($12/24) with pork ragu and the black pepper tagliatelle ($10/20). (OK, I was only pretending to consider the tagliatelle, I knew going in I wanted to try the ragu.) It was heavenly. My only regret is that I was filling up and wasn't able to eat more/all of it.

For dessert, we ordered the zeppoli, fried dough with whipped ricotta and lemon. The other choice was a chocolate hazelnut tart. The hot dough melted the sweet ricotta and it was the perfect end to our decadent carb-fest. 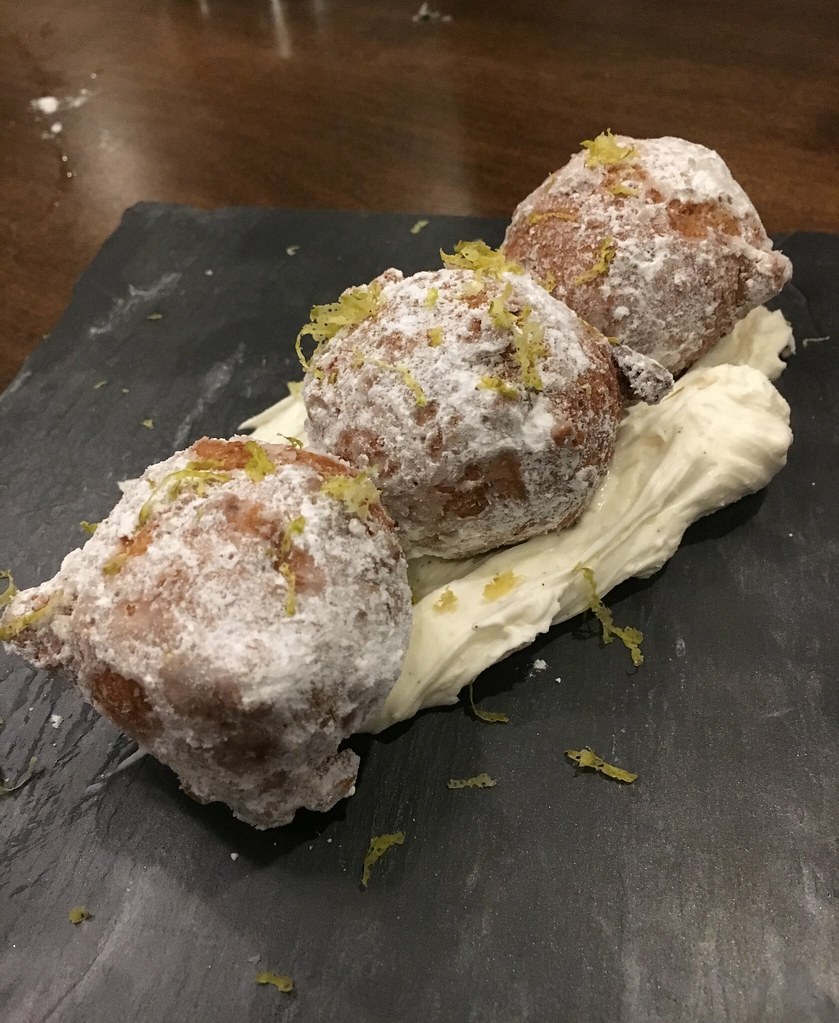 Tipo is sure to be a hit with the neighbors. Even those used to dining on-peninsula should venture out to this relaxed neighborhood spot. Tipo is located on Ocean Ave. in the former home of Borealis Breads. They're currently serving dinner at 4 p.m. with weekend lunch and brunch coming soon.
No comments:

Typically, end-of-the-year reflections involve looking back on the year that's just passed, but I don't know that 2016 was one that anyone wants to spend much time dwelling on—the universal sentiment seems to be that the year was one big garbage fire. I personally had a just fine year (short of being witness to the trauma and tragedies that affected my friends and, of course, the state of national politics), but I'm hoping 2017 will be a better year for everyone.


The beginning of a new year is not the only excuse to take stock of things, but also because today, January 9th, marks the 8th anniversary of my blog. And my, how far we've come from 2009 when I frequented RiRa and Bull Feeney's, and Bresca (RIP) was my favorite special occasion spot.

Certainly the explosion of food trucks in Portland in recent years has changed the fast casual dining scene—this year, the most popular post on the blog in 2016 was an update in the spring about the current fleet of food trucks. I'll be sure to update readers again this spring as the food truck fleet is ever-changing.

Other popular posts of 2016 included the growing businesses of Thompson's Point, with Cellardoor Winery joining Stroudwater Distillery and Bissell Brothers Brewing. The third most-viewed post was the first look at Foulmouthed Brewing in South Portland, with brunch at Terlingua and a first look at Drifters Wife coming in at fourth and fifth most popular posts.

Looking back at my posts from 2016, I see time spent exploring areas outside of Portland—a dinner in the Kennebunks turned me onto the delicious Spanish-inspired Toroso from Chef Shannon Bard; I explored the growing businesses of Westbrook, and ventured to Brunswick for a smoky Scotch tasting (still not my fave).

I was busy with the Portland Spirits Society, a women's spirits tasting group, last year—our absinthe night at Vena's Fizz House was a popular one, as was oysters and Caledonia Spirits at Eventide Oyster Co. While I don't have any PSS events scheduled just yet, I've definitely still got some ideas kicking around in the hopper for the new year. 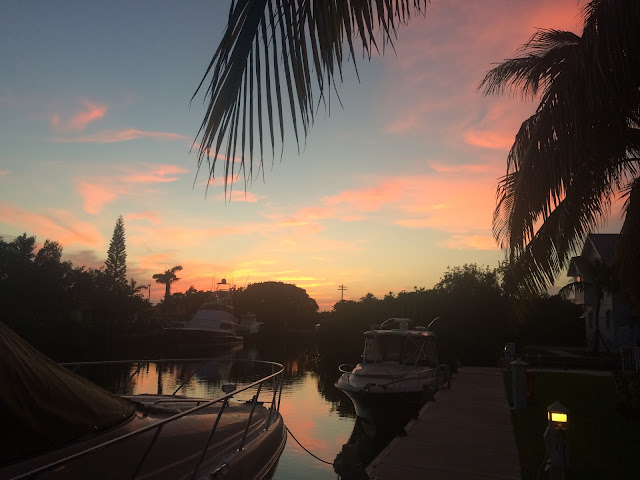 I ended the year on a high note with a trip to the Florida Keys. It was our friend LBK's birthday and she cashed in her chips for a trip somewhere warm. A group of 7 of us stayed in Marathon for the better part of a week, and then a smaller group of ladies headed down to Key West for some mischief involving scooters, drag queens, and piña coladas in to-go cups.

The only food photo I took on the trip (even food bloggers like to take vacations from photographing their food) was lunch on our first day in Key West. We stayed down the block from Bien Key West, and while that plate of creamy pasta and accompanying bottle of wine at Antonia's was extremely comforting, this fresh salad with pickled beets and spicy, tender shrimp on top was the best thing I ate in the Keys. 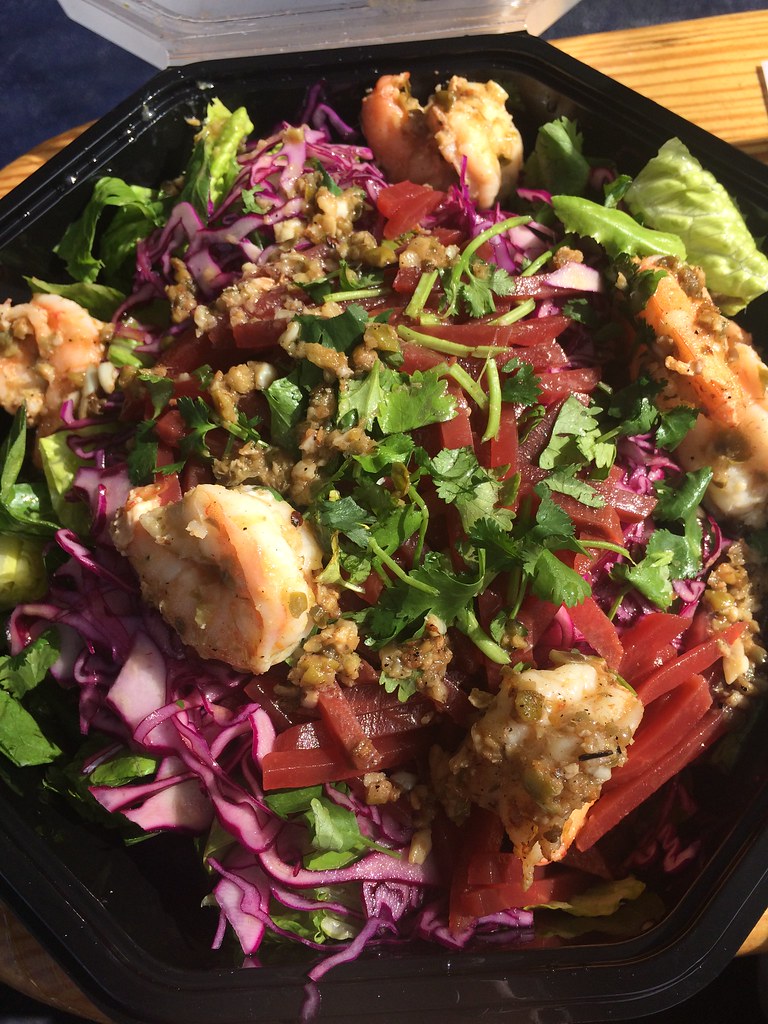 I leave you with our first brunch spread of the new year—a posh and inspiring way to start 2017. Between the cheese board with idiazabal and jamon iberico that my friend smuggled in for me from the Basque country and the sturgeon caviar from Browne Trading Co., we celebrated the passing of another year, hoping for a kinder, gentler year full of nourishing food for all. 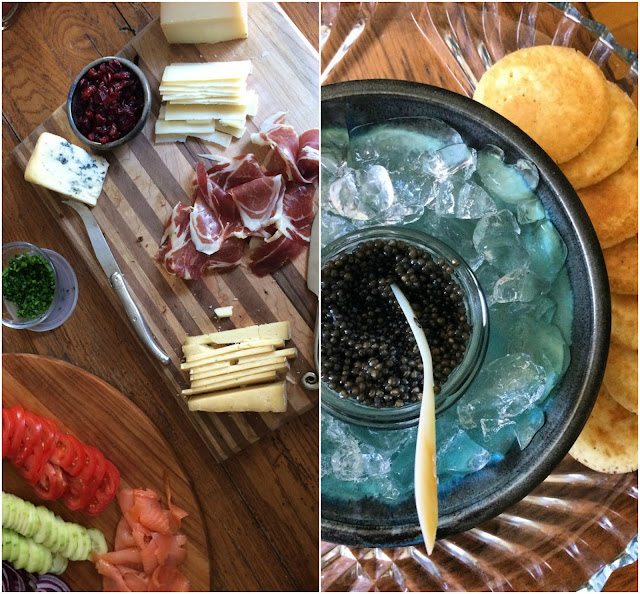