Since I received a record player for Christmas, I've been really into daytrips out of Portland to hunt for records (combined with some good food, natch). So far we've been up to Vinylhaven Records and Vinyl Junky in Brunswick and down to Music Plus in Biddeford -- unfortunately, he was closed that day, but that didn't stop us from filling up at the nearby Palace Diner and having a drink at Round Turn Distilling. We'll just have to come back when neighboring Custom Deluxe is open for dinner.

My most recent trip out of town to Westbrook though, had nothing to do with record hunting (although maybe I missed a good music shop out there??), but rather beer and chocolate. A nice consolation prize.

First, we headed to the newly opened Mast Landing Brewing Company on Main St. to meet some friends for happy hour. Like the other locals filling the brewery, our friends are so excited to have a brewery in their neighborhood. Mast Landing opened last weekend and on tap was their Seavey Island Blonde Ale, Tell Tale Pale Ale, and Mainstay IPA. (Before you ask, yes, Mast Landing is in Freeport, where the owners are from and got their start in homebrewing.) 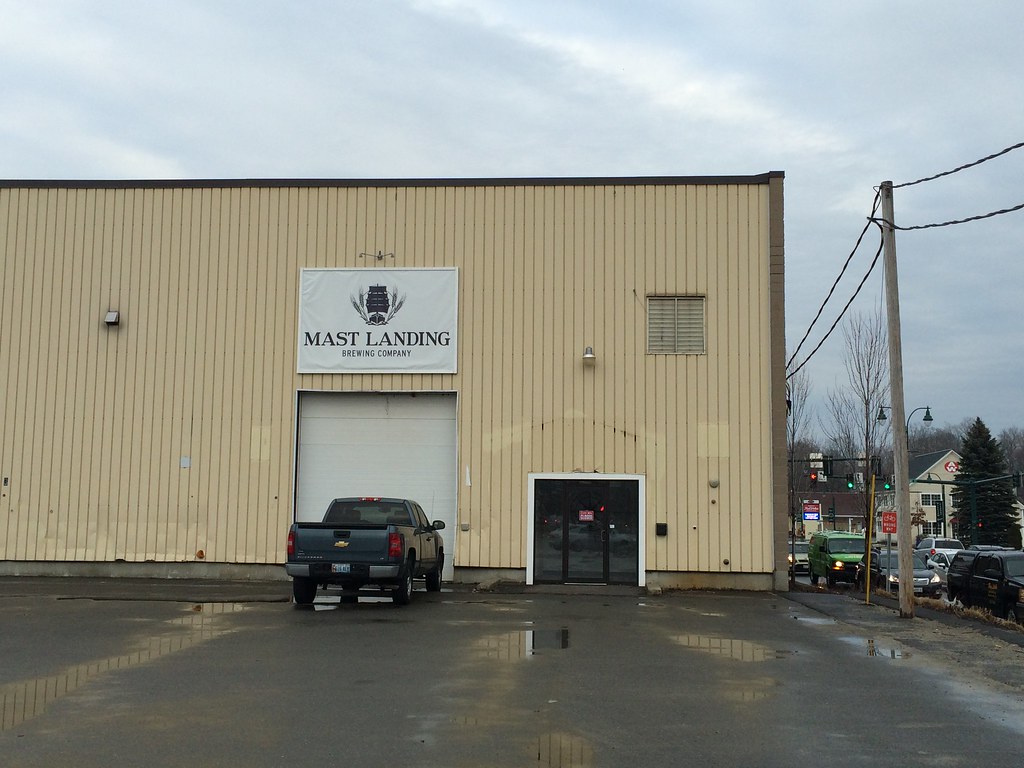 The brewery itself is in a huge warehouse - one of the owners told me they were lucky to find a space that would allow them to scale up as they grow. When you enter, you walk past the brewing space into the tasting room, where there's plenty of room and tables made from recycled pallets.

Between the two of us, A. and I ordered the pale ale and the IPA. I got a small glass of the IPA, thinking I'd go back for a small pale ale, but ended up sticking with the IPA on my second round. The pale ale was sweeter, with a candy flavor from the hops, and the IPA had a nice bitterness. 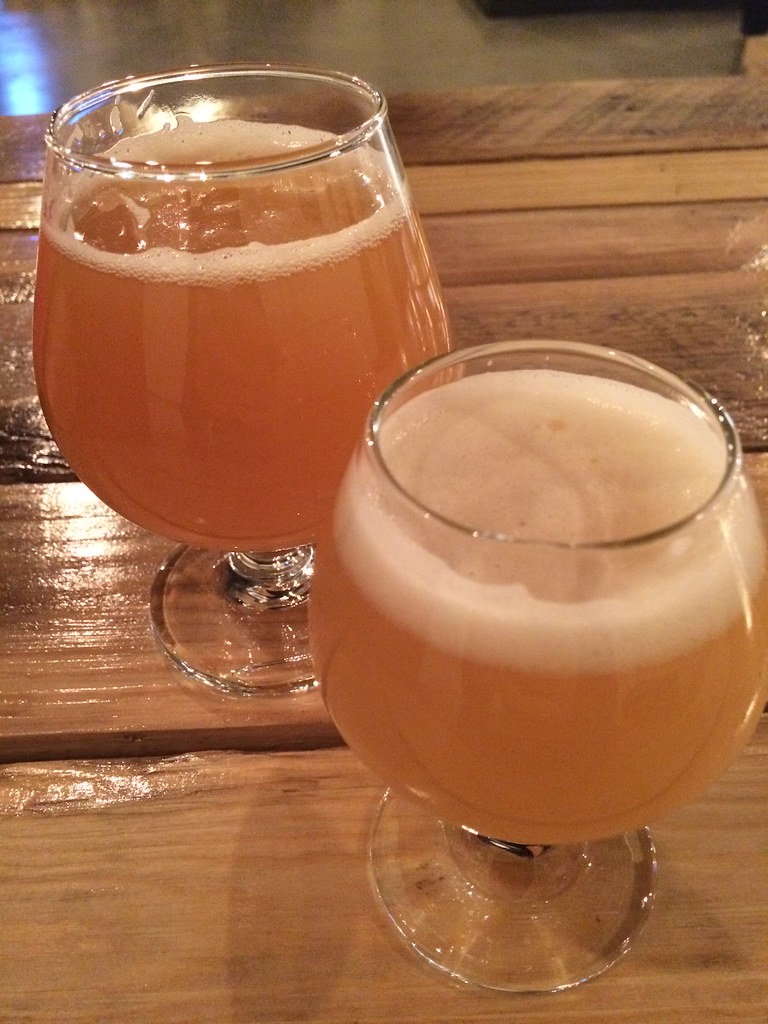 Mast Landing is open Friday from 3-8pm and Saturday from 12-8pm. The location can be kind of hard to find - it's behind Profenno's Bar & Grill, so turn into their parking lot and drive through the back of it. Once you come around the building, you'll see a big warehouse with the brewery's sign.

Nearly across the street is the new home of Black Dinah Chocolatiers, with a small retail shop for their beautiful chocolates in front of a large facility for making, packing, and shipping their chocolate. I stopped in for a tour and a taste from chocolate makers Kate Shaffer and Caitlin Powell. They're providing the chocolate for the Portland Spirits Society's whiskey and chocolate pairing next week. 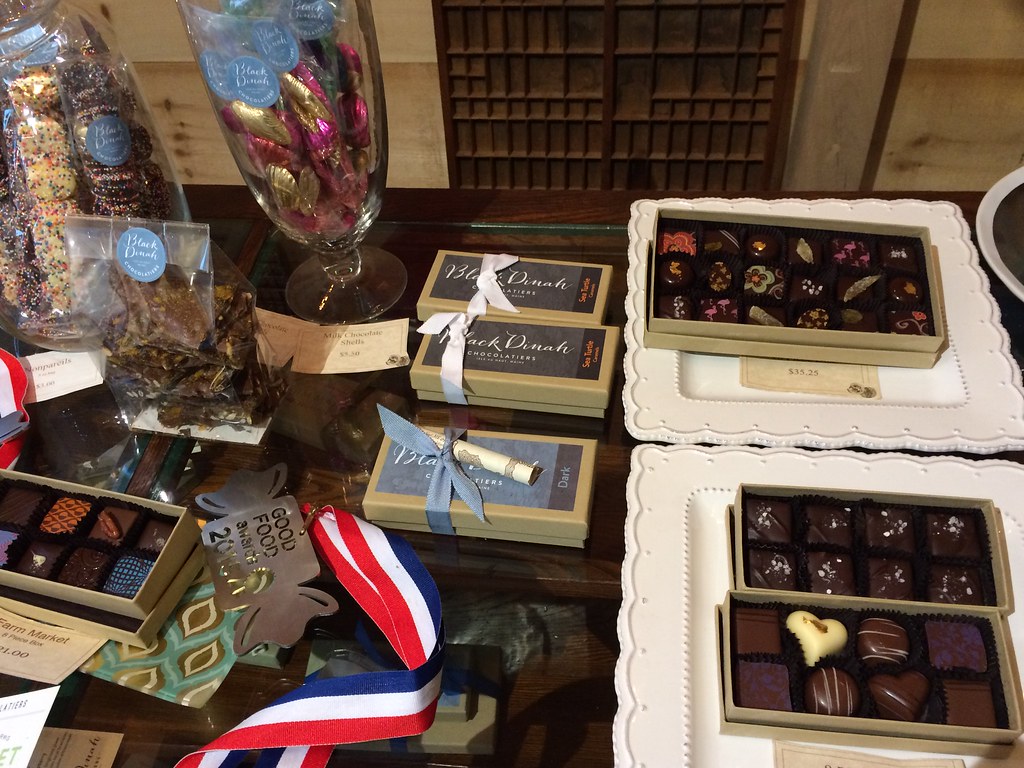 Black Dinah is new to Southern Maine, but they've been making chocolate for seven years on Isle au Haut. They use all fresh ingredients in their flavorings and as many local ingredients as they can source (aside from the chocolate and the sugar, of course). Many of their truffles are decorated with sweet, brightly colored patterns that are so satisfying to bite through.

I tried a maple caramel covered in dark chocolate and topped with smoked sea salt and a Peruvian dark chocolate vanilla truffle that were both amazing. I won't spoil the pairings for the event by saying too much more about what I tried, but if you haven't had Black Dinah's chocolate, do yourself the favor of seeking some out. The retail shop is open in Westbrook Monday through Saturday, 9am to 5pm. Their chocolate is also sold at LeRoux Kitchen, Browne Trading, and Lisa Marie's Made in Maine (on Exchange St.). 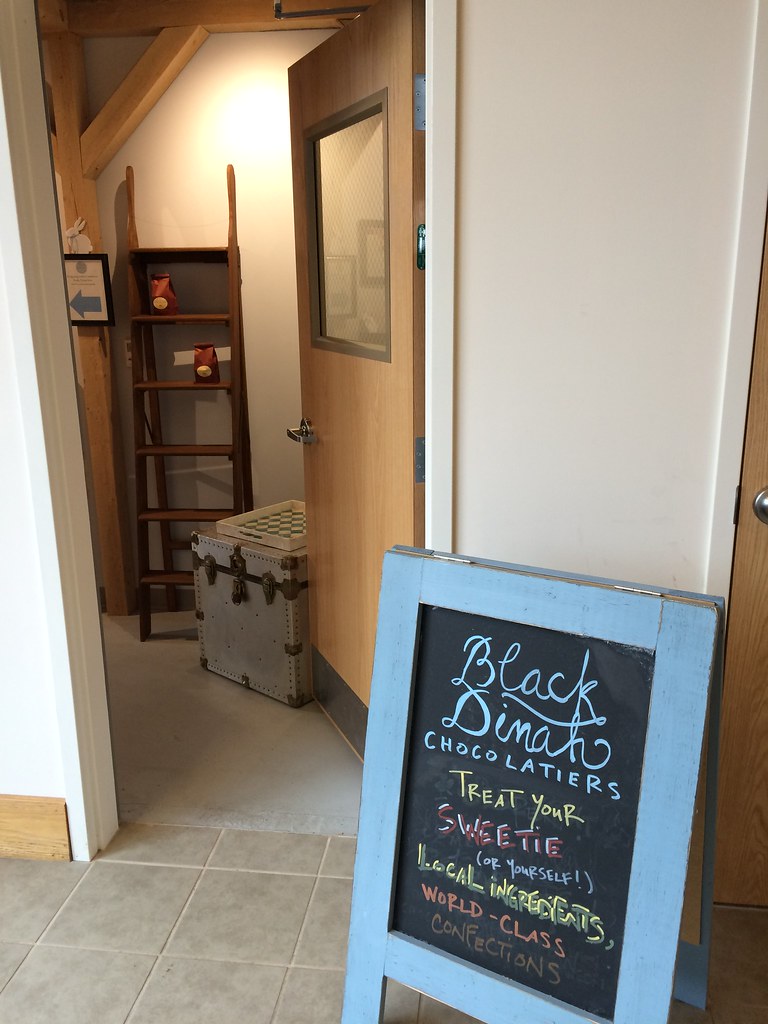 As is apparently the theme in Westbrook, Black Dinah is also a little hard to find - the address is Main St. but the entrance is off a side street, which also leads conveniently to a public parking lot. (The side street doesn't appear to have a name, but it's right next to Bridge St.)

As Portland fills up and space continues to become more expensive, don't be surprised to see more and more business opening that make the trip to Westbrook worthwhile.