My love for fresh, local tomatoes cannot be overstated. But (and I feel I'm making a bit of a canning confession here), I think preserving tomatoes in a way that captures their sweet, in-season taste can be a struggle. Preparing tomatoes for canning is always a process, no matter what method or recipe you use. In years past, I've canned crushed tomatoes; whole, peeled tomatoes; and basil-garlic tomato sauce, all in a boiling water bath canner. This method requires the addition of bottled lemon juice for safety, which (as much as I've tried to convince myself it doesn't) imparts a tart flavor.

So if you're going to go all out - peeling tens of pounds of tomatoes, scooping hot tomatoes through a food mill, lots and lots (and lots) of dripping tomato juice - you'd better be sure that when you're finished, you have jars of something you're excited to use. So this year, I pressure canned spaghetti sauce. 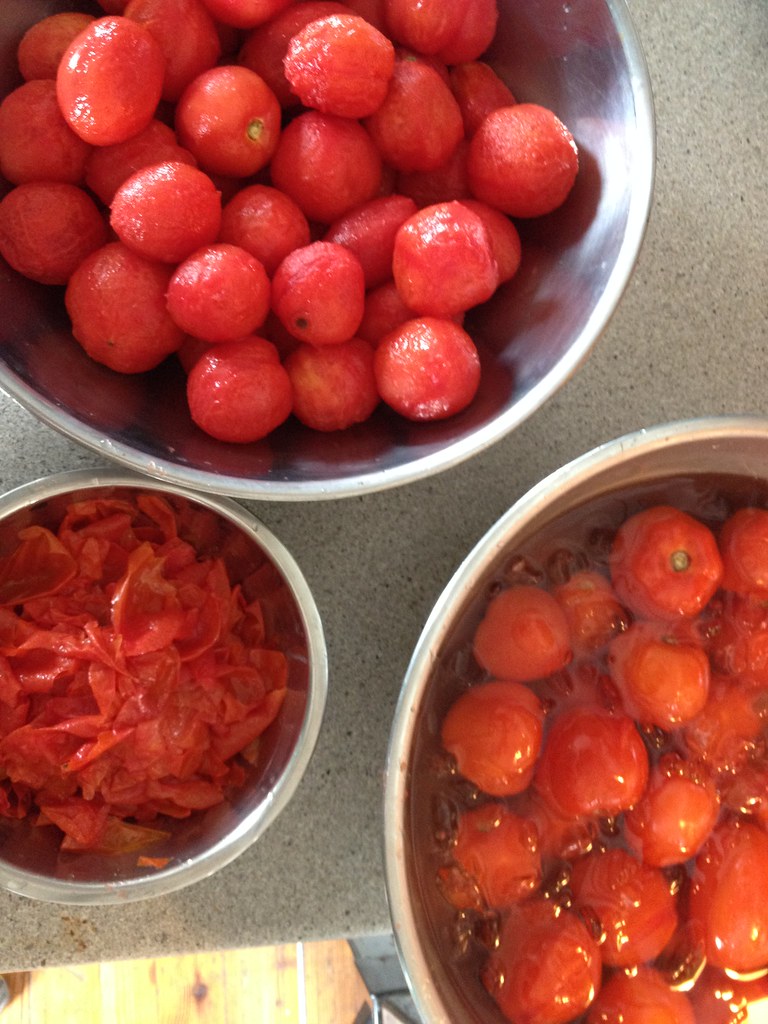 The peeling process is still necessary - or at least, I think it is. You don't have to peel your tomatoes (for safety reasons), but I prefer the resulting texture of a sauce made without tomato skins. So I score the non-stem end of all the tomatoes, drop them in boiling water (using a blanching insert in my stockpot helped hasten the process), and then cool them in an ice-water bath. This took about an hour for a half-bushel of plum tomatoes (about 20 lbs.) from Fairwinds Farm in Topsham, Maine. 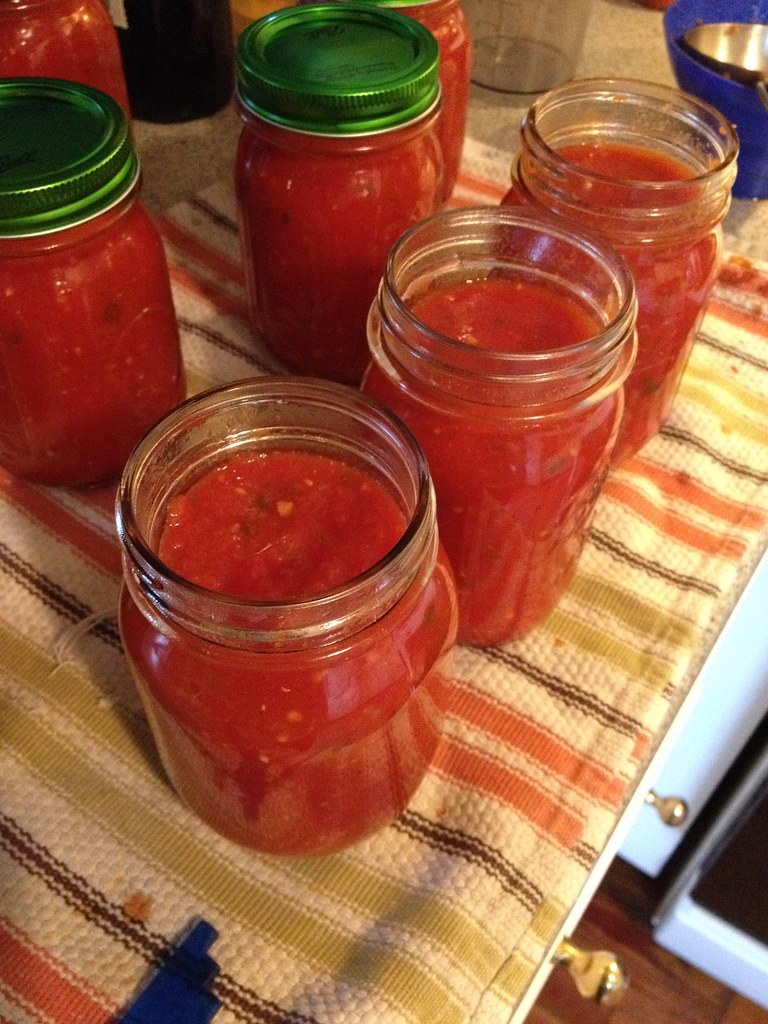 Then, I made my spaghetti sauce: chopped tomatoes, sauteed garlic and onions in olive oil, and let it simmer for hours until it was reduced by about 1/3. The recipe suggests to reduce it by half, but I found my sauce was the desired consistency before that. At the end, I seasoned the sauce to taste, by adding a lot of salt, freshly-ground black pepper, a bit of sugar, and lots of fresh, chopped basil. The recipe calls for the addition of green peppers/celery or mushrooms, but I opted to leave all of those ingredients out.

I filled 10 pint jars with the sauce and left an inch of headspace. I screwed on my lids and bands and lifted my jars into the pressure canner, which was filled with 3 quarts of boiling water (I use a 16-quart Presto weighted gauge pressure canner/cooker, so I simply followed the instructions for how much water to add, how to operate, etc.). 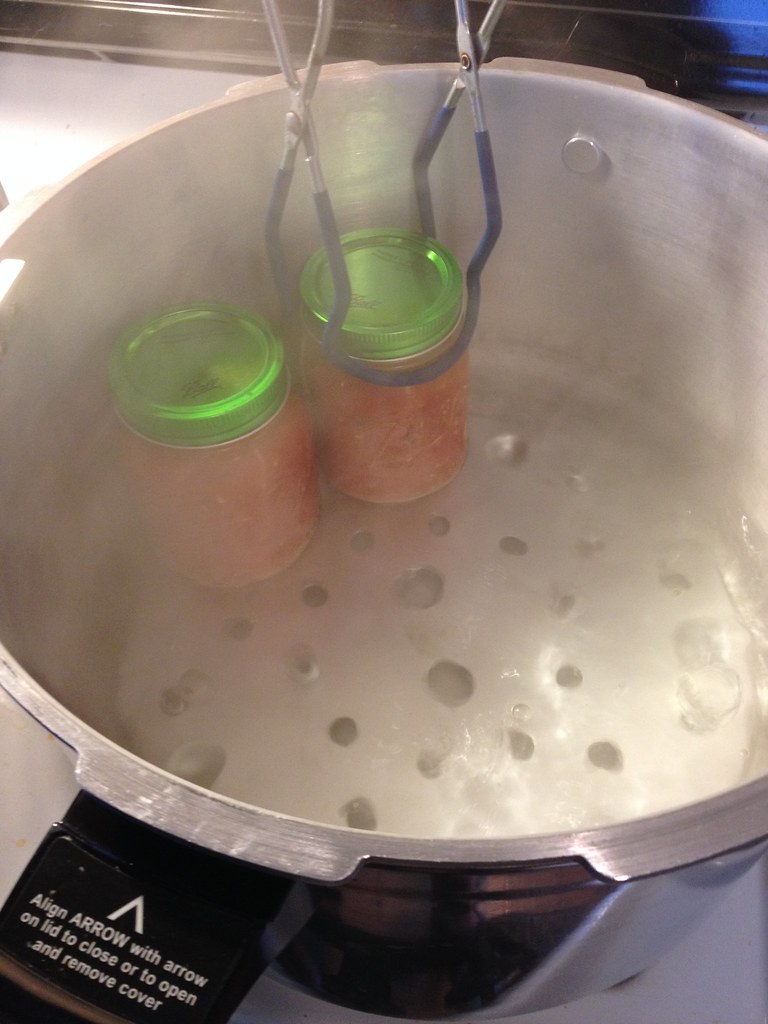 Once the canner was full (it holds 10 pints), I locked the lid on and waited for the water inside to come to a vigorous boil. I vented the canner, by letting it fill with steam for 10 minutes (start a 10-minute timer when a strong V of steam comes out of the canner's vent pipe). This step is important because it ensures the canner is full of steam, rather than steam and air, which will result in the proper internal temperature. 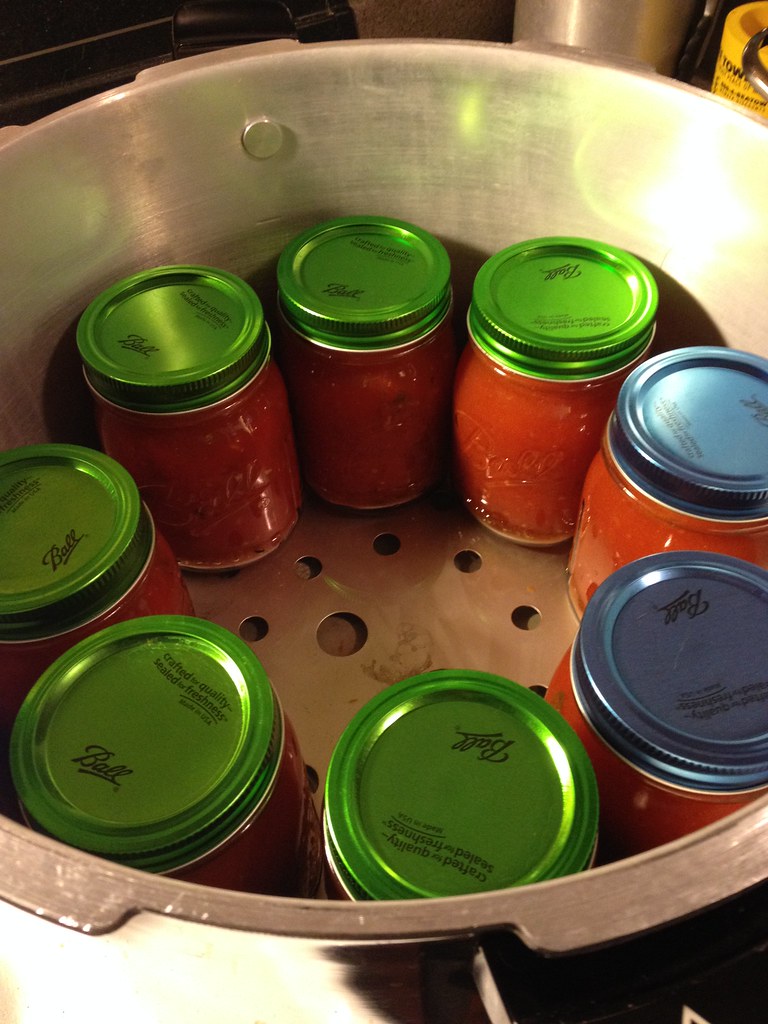 I processed the spaghetti sauce for 20 minutes at 10 pounds of pressure (11 pounds if you're using a dial gauge canner). Pressure canning feels like a lot less hands-on work than boiling water bath canning. I don't think that's actually true, but after pressure canning, I was left with the very satisfying feeling that it was a lot easier than boiling water bath canning.

After I removed them from the canner, the 10 pints of sauce sealed almost immediately, but I let them cool completely until the next evening before I labeled them and put them away. 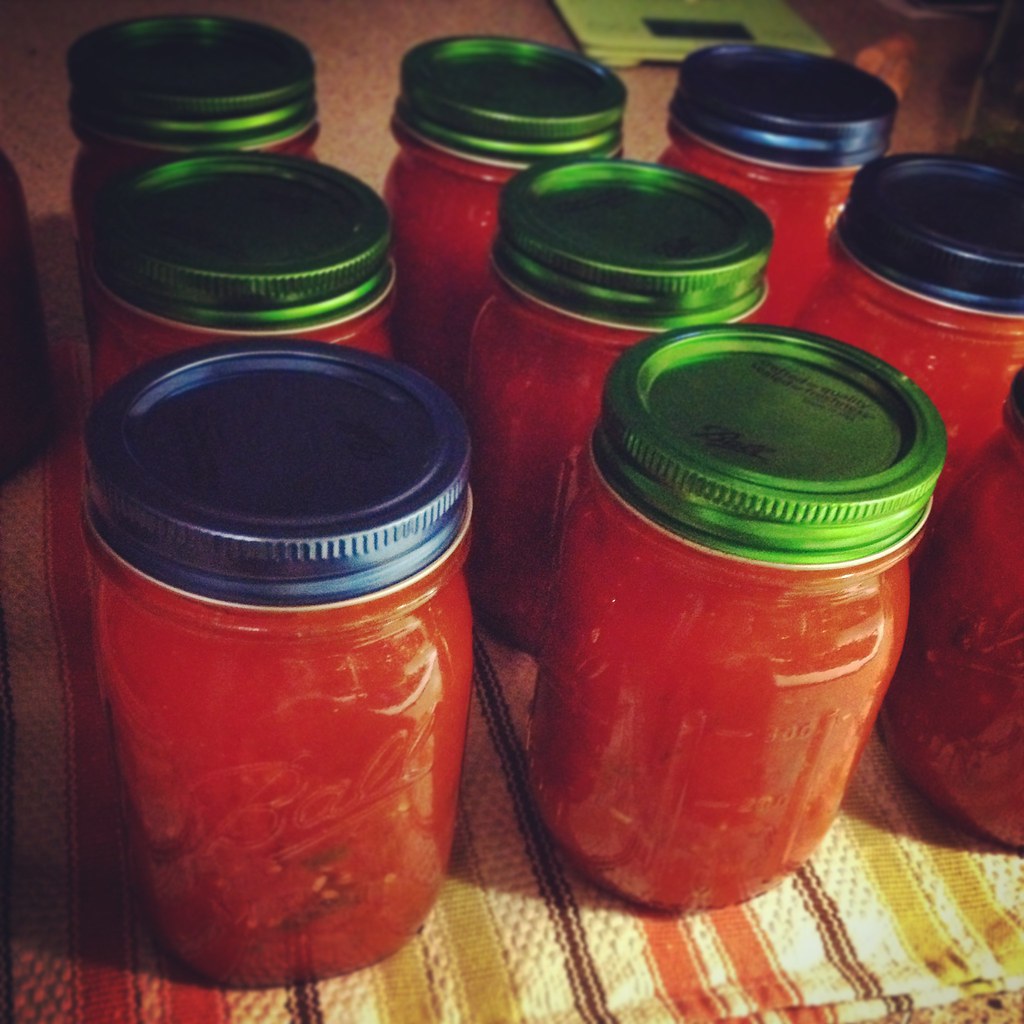 This spaghetti sauce recipe is great because it doesn't require the addition of bottled lemon juice for safety. You can season your spaghetti sauce however you'd like; the addition of a few teaspoons of ground herbs and spices won't alter the pH significantly enough to become a safety concern.
As always, do not change the quantities of food (tomatoes, garlic, onions, peppers, celery, and mushrooms) in this recipe or risk creating a product that might be unsafe for long term storage. Note that I left things out, rather than add more things in. Omitting low-acid ingredients is OK, but adding more is not.

If any of that sounds like Greek to you, read up on how to preserve food safely using a pressure canner.

Spaghetti Sauce
From the National Center for Home Food Preservation

Wash tomatoes and dip in boiling water for 30 to 60 seconds or until skins split. Dip in cold water and slip off skins. Remove cores and quarter tomatoes. Boil 20 minutes, uncovered, in large saucepan. Put through food mill or sieve.

Saute onions, garlic, celery or peppers, and mushrooms (if desired) in oil until tender. Combine sauteed vegetables and tomatoes and add remainder of spices, salt, and sugar. Bring to a boil. Simmer uncovered, until thick enough for serving. At this time the initial volume will have been reduced by nearly one-half. Stir frequently to avoid burning.