Originally published in the Portland Phoenix on September 12, 2014 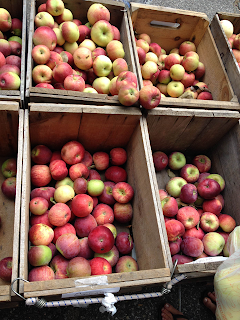 These aren’t far-off planets as envisioned by a science-fiction writer; rather, these unusual names and appearances describe heirloom apple varieties. As students trundle off to school, the nighttime temperatures begin to dip, and the daylight lessens, apple trees all across Maine are ripening. While we have come to think of apples as only “red” or “green” (and usually disappointingly mealy), local orchards are now offering apples with a plethora of tastes, textures, and uses.

For those looking to learn more about the pedigree of the unusual and vast variety of forgotten apples, turn to Rowan Jacobsen’s new book, Apples of Uncommon Character: 123 Heirlooms, Modern Classics, and Little-Known Wonders. Jacobsen currently resides in Vermont, but is no stranger to Maine, exploring the terroir of bivalves in A Geography of Oysters and recently volunteering with NOAA researching the health of shellfish and puffins in the Gulf of Maine. In his latest work, Jacobsen presents an encyclopedia of apples, detailing rare and heirloom varieties, accompanied by beautiful color photographs. Become an apple aficionado through Jacobsen’s vignettes detailing rare and common apples’ history, as well as which apples are best for fresh eating, baking, saucing, and cider. The book’s final chapter provides apple recipes, from lobster Waldorf salad to classic tarte tatin.

Jacobsen’s short introduction delves into the apple’s journey from Europe to the fledgling United States (including mention of John Chapman, aka Johnny Appleseed, and his entrepreneurial work adding value to plots of land by installing apple orchards) and then into the declining number of apple varieties available in today’s supermarket. Jacobsen also details the work of pomologists like Maine’s John Bunker, who hunts down rare apple varieties and preserves them in his Palermo orchard. Bunker and his wife Cammy Watts offer a 5-week apple CSA, providing share members with 55-60 pounds of apples, delivered every other week from mid-September until early December. The “Out on a Limb” CSA showcases about 30 different unusual apple varieties, from early-season tart specimens to end-of-season apples that sweeten in storage. Bunker will return to MOFGA’s Common Ground Fair again this year with his popular apple display.

In southern Maine, apples have been quietly populating stands at the farmers’ market for about a month now. The first arrivals are what farmers call “Early Macs,” or McIntosh apples. This New England favorite is best early in the season, before the flesh takes on an unappealing mushiness. At Uncle’s Farm’s stand, farmer Mike Farwell is selling these Early Macs, plus Cortlands, Ginger Golds, and Paula Reds for $1.50/lb. Nearby Snell’s Farm is selling Sunrise Macs and Ginger Golds. All of these varieties are good for both fresh eating and baking, but do not store well like some other late-season varieties.

Sweet cider from Meadow Brook Farm & Orchard in Raymond is also now available at the farmers’ market, and their pick-your-own orchard is open weekends from 9 am to 6 pm. At the Urban Farm Fermentory, brewer Reid Emmerich ferments juice from McIntosh and Cortland apples using the yeast naturally present on the fruit. The resulting “cidah” is much drier than most varieties, as other commercial cideries add additional yeast and sugar to create a sweeter drink. Whether you’re drinking or eating your apples this fall, look beyond the supermarket to see, as Jacobsen says, “the many things an apple can be, the many roles it can play in our lives.”