Our upcoming "Friendsgiving" dinner prompted a trip to the New Hampshire state-run liquor store last weekend to stock up on booze for the party. To liven up the otherwise mundane trip, we stopped in Kittery to explore their expanding dining scene.

Our first destination was The Black Birch. I'd previously only been for happy hour snacks, so I was looking forward to exploring the menu further. But at 6PM on a Saturday, the place was packed and we could barely even get into the restaurant to give our names to the hostess. A two-hour long wait for a table put us back on the street, wondering where to go in the meantime. 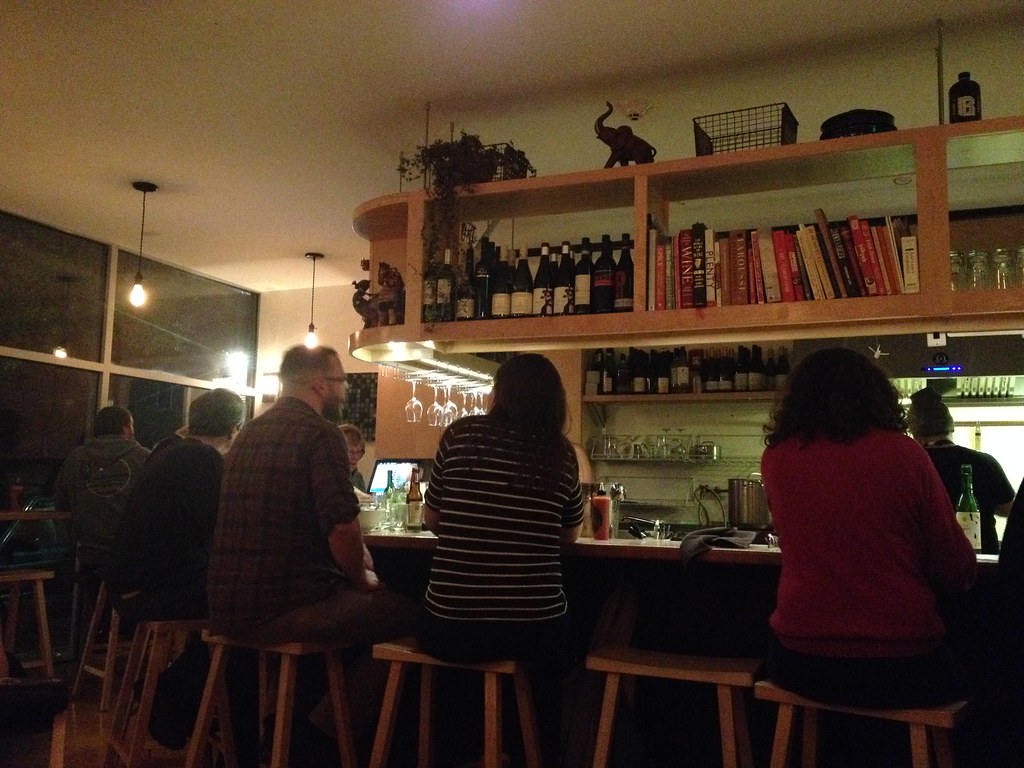 I knew that since my last visit in April, Anju Noodle Bar had opened next to the Black Birch, so we walked around the corner to see what we could find. Anju was indeed just a block down, in a cute stretch that also contained the new custom cuts butcher shop from former Rosemont Market butcher Jarrod Spangler; an adorable art, jewelry, and housewares gallery; and Lil's Cafe, whose crullers have found a permanent spot in the back of my mind.

After some window shopping, we went into Anju and were surprised to find plenty of seats available. We were seated along the windows at a bar and ordered some wine and beer, while we waited for our table to be cleared. The space is bright (well, in the daytime at least) and airy, with plenty of bar seating and a few larger tables. There's a few minimalist pieces of art and some air plants hanging on the large, white walls. 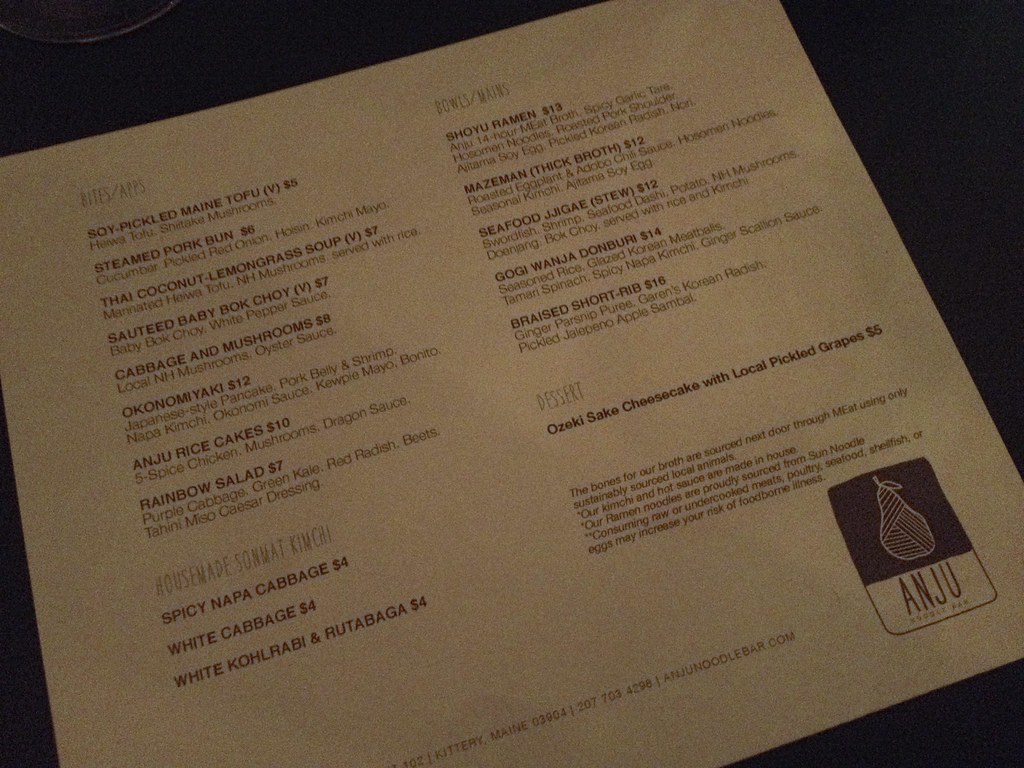 The menu offers plenty of mouthwatering ramen, but we stuck to the Bites/Apps section, so as to not completely ruin our appetites for our meal at the Black Birch. Despite our best efforts at restraint, we still managed to order most everything from the appetizers.

Of course, the steamed pork bun ($6) was necessary, a few to share even, and the okonomiyaki ($12) or egg pancake with shrimp and pork belly, topped with Kewpie mayo and bonito flakes. We tried to order two, but realized that was probably overkill. Our helpful server recommended a dish we had overlooked, the cabbage and mushrooms ($8). It ended up being a favorite, a great, savory mix of crunchy red cabbage and sauteed local mushrooms.

The rice cakes ($10) were another great dish that surprised us; I didn't figure I'd be a huge fan, with the addition of Chinese Five Spice to the duck confit, served over mushrooms and two sticky rice cakes, but I was mistaken.

We actually tried to order the Thai coconut lemongrass soup too ($7), but it didn't make it into our order and by the time we realized it wasn't coming, we also realized we didn't need it. Coincidentally, the same service hiccup happened at the Black Birch too, in that we ordered a slew of dishes to share and two didn't arrive, but that was fine by us by the time we realized. (I think that taking orders without writing them down is fine...until it's not.) 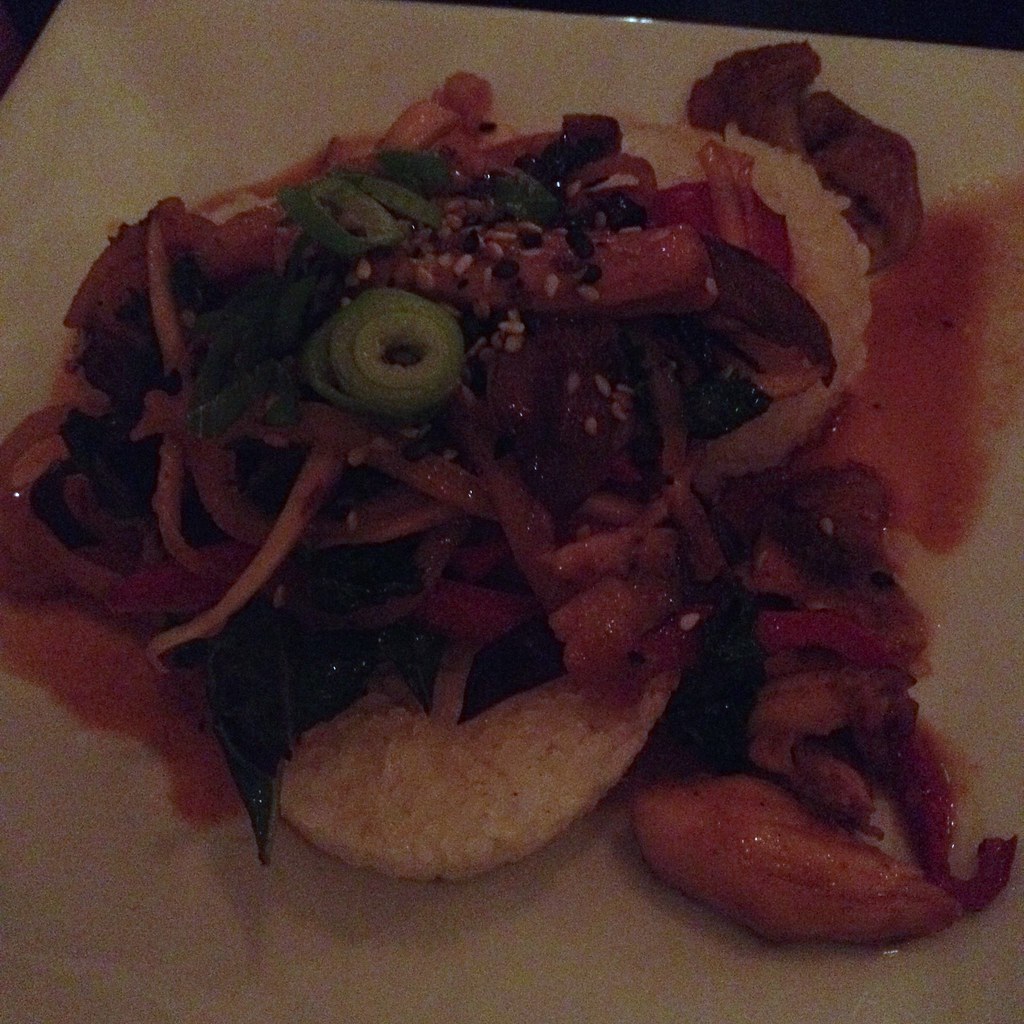 That aside, we loved Anju Noodle Bar and would frequent this place all.the.time if we lived in Kittery. The atmosphere was quieter and calmer than neighboring Black Birch and would offer a nice spot to eat a comforting bowl ramen solo at the bar or share several plates with friends at a table, as we did. Our meal was shockingly inexpensive; the whole thing was less than $115, including tax, tip, and a bottle of wine (less than $30 each for 4 of us).

After a constitutional stroll down the main drag of Kittery Foreside, we stopped back into the still-crowded Black Birch to see how our reservation was coming along. We still had a short wait, so we were seated in the back hallway and offered drink menus.

Every drink on Black Birch's speciality cocktail list was so tempting that I took forever to decide. Eventually, I was drawn in by the weirdness that was Flowers for Algernon: Old Overholt Rye, Fernet Branca, lavender syrup, house tonic, and lime. Somehow, the spicy, medicinal, floral, sweet, and tart ingredients all worked so well together. 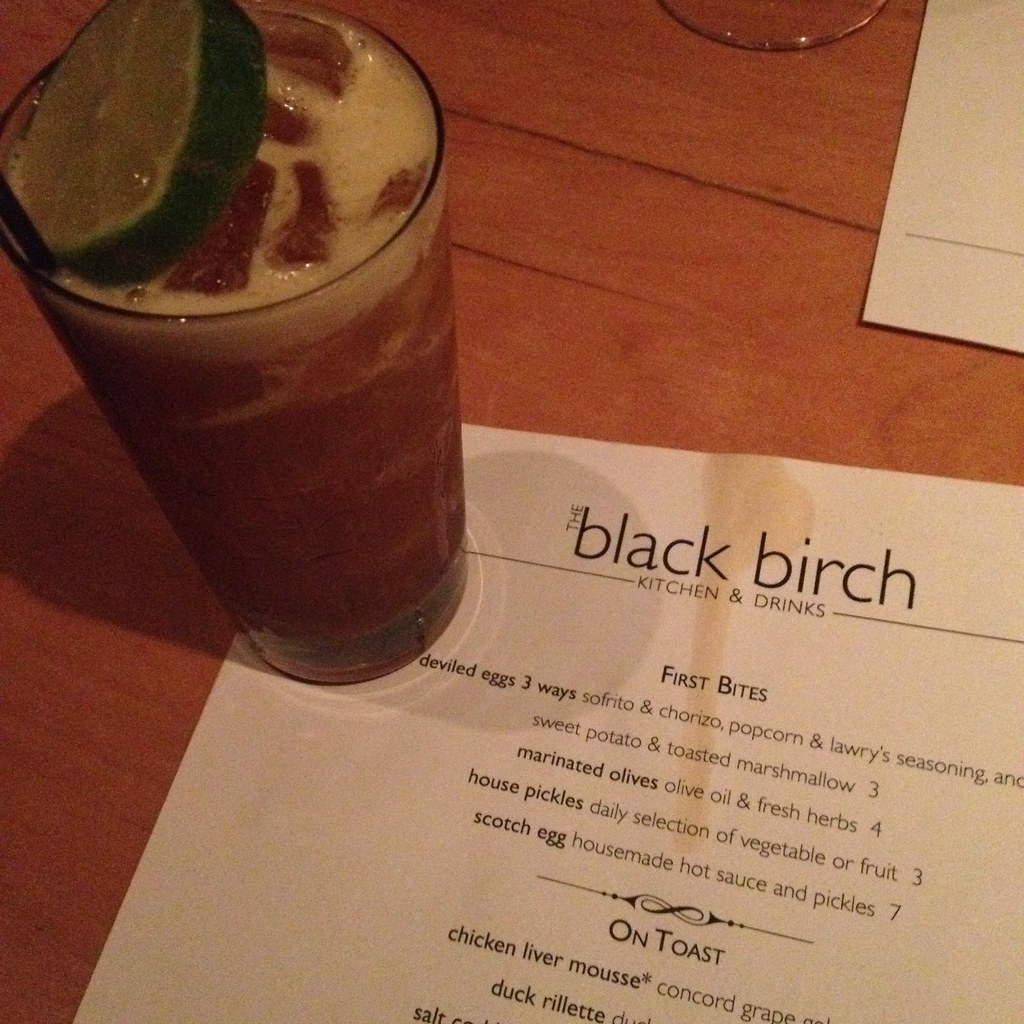 After our drinks were delivered, we were led to our table - a communal hightop in the middle of the busy, busy restaurant. We settled in between some ladies who were, "so excited to go home, drink wine, and smoke cigarettes," and a family...who was probably not going to do that after they got home.

We again, tackled the menu with vigor, ordering American classics like deviled eggs ($3), house pickles ($3), and Buffalo chicken mac and cheese ($8). Some chicken liver mousse ($5) and duck confit poutine ($9) made our order a little more international, while a beet salad ($10) added some virtue.

The trio of deviled egg halves came quickly, topped with popcorn and Lawry's seasoned salt, sofrito and chorizo, and sweet potato and toasted marshmallow. Fortunately, one member of our party doesn't like mustard, so there was less competition for the eggs. The group's favorite was the toasted marshmallow, which sounds totally weird, but worked, with the burnt sugar contrasting the sweet potato and rich egg. 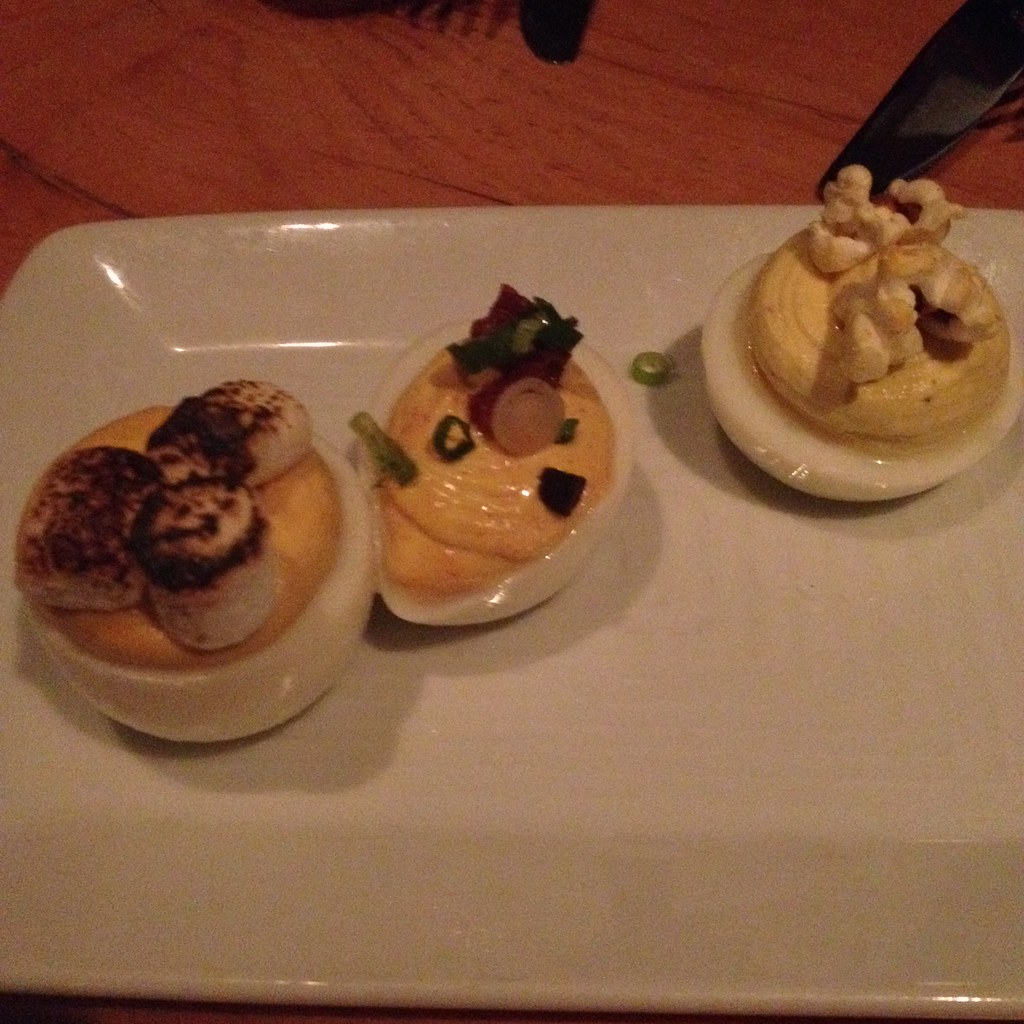 The chicken liver mousse came in a 4 oz. jelly jar and topped with a thin layer of grape jelly. It was so rich and creamy; it disappeared quickly. The salad was up next, a fresh mix of arugula, beets, and carrots, dressed with a zippy pineapple vinaigrette. Of course, the Black Birch kitchen found a way to make even a salad have a decedent spin, topping it with a pistachio tuile or thin candy-like wafer of hardened sugar, butter, and nuts.

The poutine was a lovely mess of crispy fries, savory gravy, melted cheese, and duck confit. But as we neared the end of this eating extravaganza, we realized our palates were being assaulted by this extremely salty dish. Uh oh, were we beginning to see that the Emperor wasn't wearing any clothes?


Fortunately, the pickles and mac and cheese didn't make it to our table; we had thrown in the eating flag by then anyway.

Our bill at the Black Birch was comparable to that at Anju, and we were again astounded by all the incredible food we'd just eaten at such reasonable prices. We felt that if these restaurants were in Portland, each dish would have been a few dollars more.

Next time you head to Kittery, for some outlet shopping or on your way out of state, stop by the Kittery Foreside and check out Anju Noodle Bar and the Black Birch. If you time it right, you could have lunch at Anju, shop in Folk and MEat, have treats at Lil's Cafe, and happy hour at the Black Birch. Good luck fitting all that into your belly though!