Let's talk turkey: the best bird for your dollar 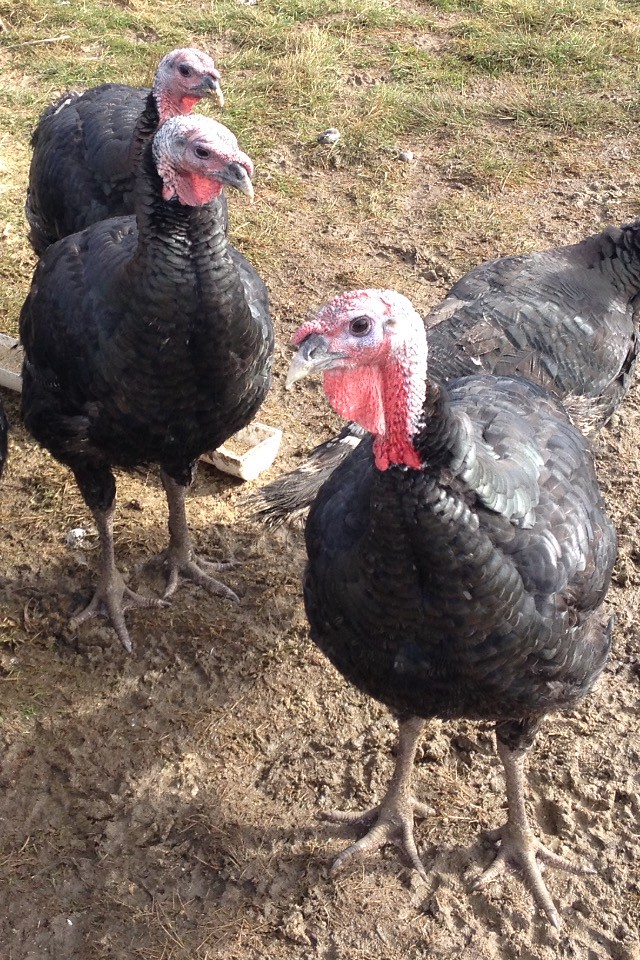 Wolfe Neck’s Farm’s livestock manager Ben Jensen is not very happy with the condition of the ground in the turkey pen, thick with mud after last week’s constant rain. He plots ways to dry it out while the turkeys squelch around happily, wandering over to the fence to peck idly at our jacket hems. Jensen is responsible for getting the 300 broad-breasted bronze turkeys he’s been caring for since July to slaughter in a few weeks. The turkeys are in the home stretch, still gobbling and pecking at bugs and their troughs of organic, GMO-free, Maine-grown grain.

Undeniably, this is the best life for a Thanksgiving turkey. On a beautiful fall day, the sunlight glints off the nearby Harraseeket River. The farm’s 2 pet bunnies hop around contentedly. Chickens skitter in and out of a neighboring pen, while the cows watch placidly from across the road. The turkeys live in two large, open-sided greenhouses that protect them from predators, but still allow them to explore the pasture. Jensen hand feeds the birds twice a day and says they live an existence of which we’re both jealous, just eating, hanging out, and sleeping.

This luxurious lifestyle comes at a cost. When I ask how much he’s charging for the turkeys, Jensen confesses he felt guilty setting the price at $5 per pound. The birds range in size from the smaller 15-20 pounds up to 30 pounds. At the largest weight, a turkey could potentially cost $150. Ultimately though, Jensen has to cover the expense of renting a refrigerated truck to transport the turkeys from West Gardiner, after their fateful trip to Weston’s Meat Cutting. The organic, GMO-feed he buys by the truckload isn’t cheap either (while the turkeys are raised organically, they are not certified as such, because they’re not processed in a certified organic facility).

But the pricing of Wolfe’s Neck Farm’s turkeys in on par with other area farms offering a similar product. Farmers at Frith Farm in Scarborough, Serendipity Acres in Yarmouth, and Warren’s Mainely Poultry are all selling their all-natural, free-range turkeys in the $4-5 per pound range. Turkeys from Wolfe’s Neck Farm and Frith Farms can be ordered directly through the farm, while Rosemont Market is taking orders for Mainely Poultry and Serendipity Acres.

Whole Foods Market offers less expensive options, but there’s no option for a trip to the farm to see how your holiday table’s centerpiece spends its days. Instead, the organic grocer uses non-profit Global Animal Partnership’s Animal Welfare Rating Standards. The market’s butchers recommend the Whole Foods turkey, raised by Jaindl Farms in Pennsylvania and sold under the store’s brand. Here, only organically-certified ($3.99 per pound) comes close to the conditions achieved at a local farm, with a “Step 3” rating (5 being the best), meaning no crowding, an enriched environment, and access to the outdoors. To be fair, even a “Step 1” rating is more than your average factory poultry farm achieves.

Eyeing the turkeys at Hannaford that cost $.99 per pound? Wondering if paying 4 to 5 times that is worth it? After all, the price difference for a locally-raised, free-range bird should do more than assuage one’s guilt about eating a living thing, it should offer a noticeable difference in taste as well. Avoid any buyer’s remorse by sampling some Mainely Poultry and Serendipity Acres turkey at LeRoux Kitchen on Commercial Street on November 15th at 1p.m. Pick up turkey roasting tips, sample some wines to pair with traditional Thanksgiving foods, and see for yourself how those happy turkeys taste. If you’re convinced, head down to Rosemont Market on Commercial Street’s butcher shop to order a bird afterward. The turkeys sell out fast.

Originally published in the Portland Phoenix on November 5, 2014