Writing a book about the history of alcohol and drinking Maine has lead to a lot of jokes about all the "research" I have to do. I have lots of people volunteering to be my "research" assistants (always with the air quotes).

Recently, I went for some actual research (but still with the perk of drinking) to John Myers' Mixology course, offered through MECA's Culinary Arts Continuing Studies. Myers currently works at the Portland Hunt & Alpine Club and is one of, if not the, most knowledgeable bartenders in Portland.

Myers started out by saying that he'd structured the class like an art history class, "from cave drawings to the modern weirdos." After a short history of early American drinking habits (a lot of cider, rum) we delved into the first time a cocktail was defined. First appearing in a New York newspaper in 1806, the cocktail was described as "spirits of any kind, sugar, water, and bitters." None of us guessed the answer, but that definition also describes the recipe for an Old Fashioned and thus, our first drink of the course.
In 1862 flair-pioneering bartender Jerry Thomas published the first cocktail book, The Bartenders Guide (during the Civil War?? Baller). Outside of recipes for drinks titled [liquor] cocktails (a la Gin Cocktail, Fancy Brandy Cocktail, etc.), Thomas' book contains recipes for flips, slings, punch, juleps, mules, and toddies - all things we consider cocktails today.

Harry Johnson's book came next in 1900, with specific information on how to run a bar properly and how to bartend, rather than focusing on drink recipes. Johnson is credited with inventing the Bijou, which means "gem" in French. We sipped the gin, vermouth, and chartreuse cocktail, as John explained that this was the first cocktail to be made in the Manhattan/martini style.

The Bijou was interesting (strong) - I grimaced as I sipped it, while Myers described Chartreuse as tasting of "100 Christmas trees burning in your mouth, trying to decide which one's going to make you puke." I definitely could taste that assessment. 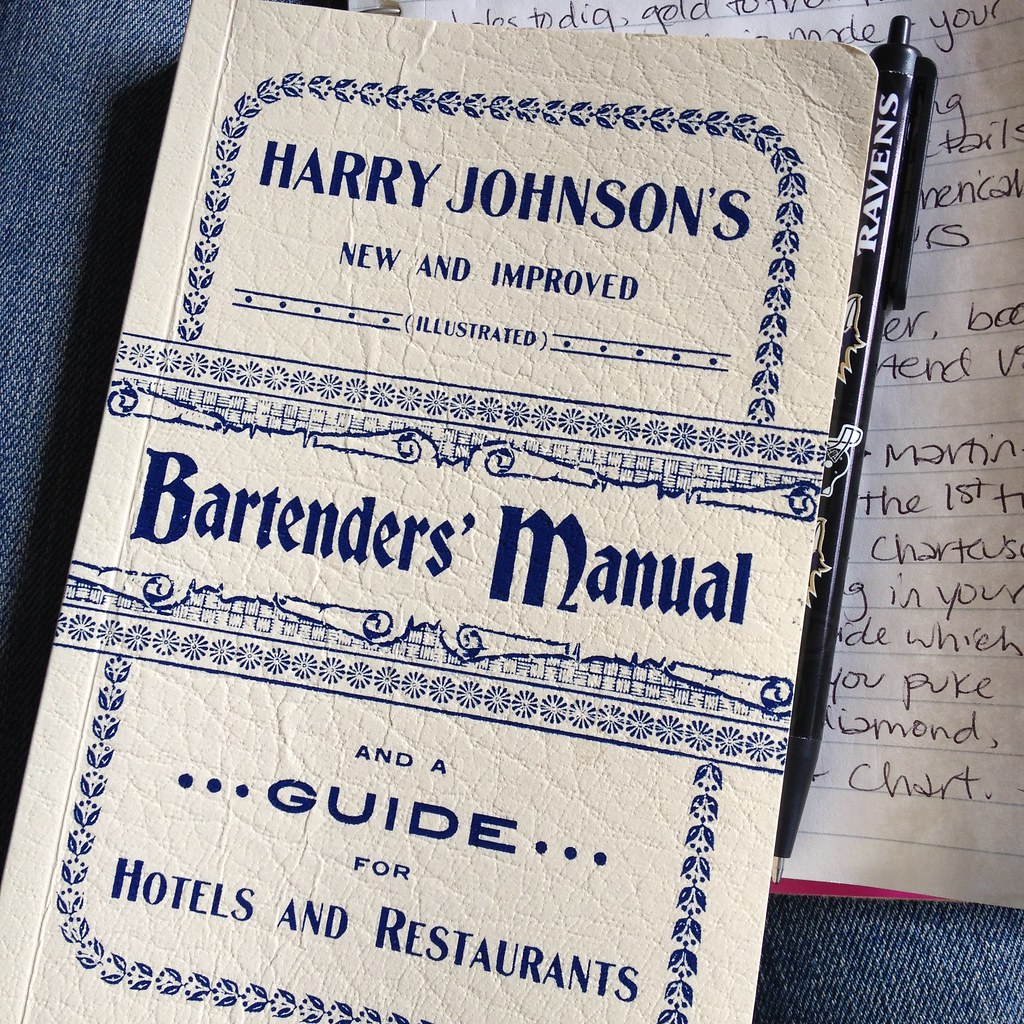 After the "temperance weirdos" had their fun, we cruised into Prohibition, where John noted the drinks became a lot sweeter with the addition of fresh-squeezed fruit juices. These new cocktails were made to appease the tastes of young flapper girls in speakeasies, as well as to cover up the flavor of rough-hewn, illegal spirits. I must be one at heart, as our third drink appealed to me the most.

The Jack Rose, made with Laird's apple jack, lemon juice, and grenadine was pleasantly fruity, but tart rather than sweet like you might think. John stressed you must have good grenadine made from pomegranate juice, not red #40 and corn syrup. He recommends Powell & Mahoney's, available at LeRoux Kitchen in Portland or making your own.

After the Jazz Age, the post-WWII cocktail scene saw the rise of the popularity of Tiki bars and culture. Ernest Raymond Beaumont Gantt, aka Donn Beach, a well-to-do beach bum arrived in Southern California post-Depression/Prohibition after spending time in the Hawaiian Islands. Donn opened a bar, tacked up some tiki masks he'd collected in his travels and Don the Beachcomber was born. He befriended the L.A. movie set and began serving them Mai Tais, a double rum, orange curacao, almond syrup cocktail.

Alternatively, Vic Bergeron aka Trader Vic opened his Tiki bar in the San Francisco Bay area and invented the recipe...not for me to say. Either way, I learned about Creole Shrubb, an orange liqueur made in Martinique, and Rhum Agricole, a Martinique rum made from the first pressings of sugar cane, rather than from molasses made from the dregs of the sugar industry. Rhum agricole is more like wine in the way it's made (Martinique being a French colony after all) and has a lighter, grassy flavor. 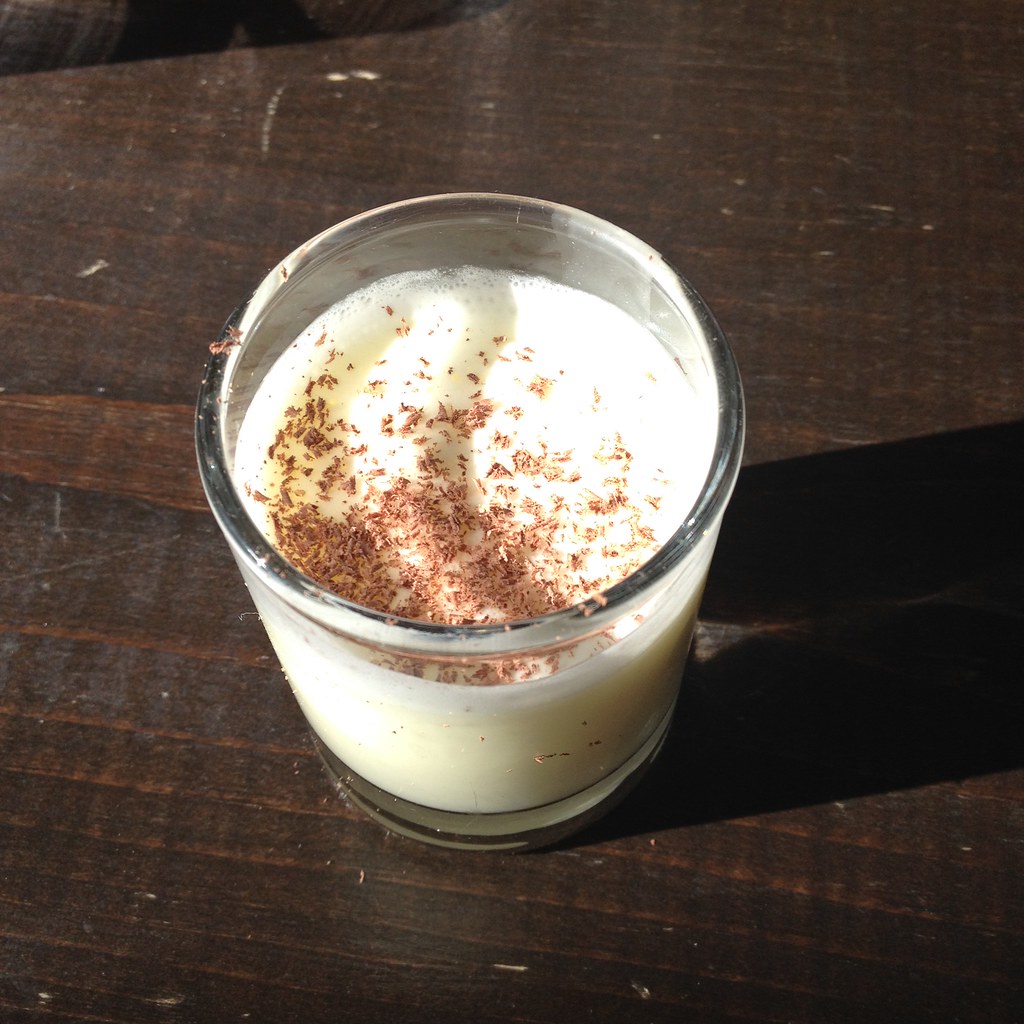 After the Mad Men martini era came the "weird" 70s, full of terrible drinks like Tequila Sunrise, Harvey Wallbanger, Grasshopper, Pink Lady, and of course, a Slow Comfortable Screw. The Golden Cadillac perfectly expresses all of that, mixing Galliano, Creme de Cacao, and cream. Dusted with a bit of grated chocolate, it's the epitome of weird, decedent, glam 70s cocktails.

Our last stop was the modern weirdos, with the Fatigue, made from a full ounce of Jack Daniels, Luxardo, and Angostura bitters. On top of the full ounce of bitters (note most recipes call for a dash), this drink is shaken, not stirred. A general rule (I learned) is that drinks containing milk, eggs, cream, sugar, and juice are shaken, while an all-spirits drink like the Fatigue is typically stirred. As you might guess, this drink is very medicinal tasting, but also tastes a bit like an Old Fashioned. Aaaaand full circle - see what he did there? Very clever.

OK, so it being the middle of the day, 6 1-oz. samples of these mostly-liquor cocktails had me a bit bent. But I know it wasn't the liquor talking to say I thoroughly enjoyed this course. John is very entertaining and put together a great syllabus that was a fascinating mix of American history, art, culture, and even architecture. The context he provided was everything. I only hope I can come close to something like that in my book!

Final anecdote: as the class was winding down, a woman asked John, did you go to bartending school? and without missing a beat, he shot back, did you go to walking school? The man clearly enjoys his work behind the bar and it shows. John can be found at the Portland Hunt & Alpine Club where he might give you a mini-lesson if you show yourself to be an interested student.

And speaking of school, I also attended the Maine Brewers' Guild's inaugural Freshman Orientation as part of Portland Beer Week. Held at Coffee By Design on Diamond Street, the 12 breweries that opened in 2014 conducted an orientation for attendees, pouring samples of their beer and giving us their elevator pitch.

At first glance, I thought it sounded like way too formal of an event for a casual beer enthusiast like myself. I imagined hardcore questioning of brewers by home brewers and beer nerds. But after the event kicked off, I quickly realized I was at an under-the-radar beer festival. The crowd was smaller; we separated ourselves into groups of 10 or so and spent about 10 minutes with each brewery before rotating.

I loved being able to try beers from Barreled Souls in Saco, Tributary in Kittery, Tumbledown in Farmington and SoMe in York. It's hard to motivate for a road trip to a brewery (that pesky drinking and driving thing), so I'm glad they came to me! The other freshmen breweries were Austin Street (Portland), Banded Horn (Biddeford), Bigelow Brewing (Skowhegan), Bissell Brothers (Portland), Foundation (Portland), Gneiss (Limerick), Hidden Cove (Wells), and Lively Brewing (Brunswick).

As the event kicked off, Sean Sullivan from the Maine Brewers' Guild announced Beer School. These events are designed to connect the interested public with industry professionals to learn about beer production, marketing, history, and tasting. Some courses may sound like they're for brewing professionals, like the Art of Blending Barrels and the Perfect Cask. But really, they're all educational and open to the public, with plenty of samples to help you learn through experience.

I cannot wait for Sprucing with Banded Horn Brewing on Memorial Day weekend next year - learning to harvest spruce tips in Etna (checks map...damn, that's near Bangor, hmm, maybe not) and then enjoying homemade barbecue and beer. Sounds so cool. I guess I have a lot of "research" to do after all.