Raise a glass to Prohibition's influence

Originally published in the Portland Phoenix on October 11, 2014 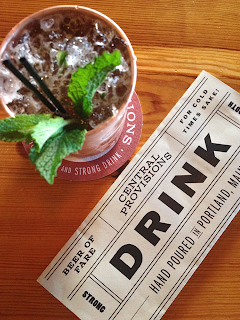 Watching the weekend revelry unfold on Wharf Street in the Old Port, it’s hard to envision the time when drinking in Portland was illegal and covert. But that was indeed the reality for 82 years in Maine, under the “noble experiment” that was the prohibition of the sale and manufacture of alcohol. Rather, defiant tipplers drank in private clubs, at times below street level, in back-room speakeasies. Today, Prohibition-era cocktails are making a comeback, especially in Portland, where bartenders shake up potent concoctions using local and house-made ingredients.

The phrase “Prohibition-era cocktails” may sound like an oxymoron, but much of what we see in today’s craft cocktail revival is actually borne of drinking during Prohibition. It might be easy to explain the recent elevation of bartending to an art form as an extension of the farm-to-table, from-scratch ethos that has gripped our national dining consciousness. No self-respecting cocktail bar would be complete today without fresh fruit, juice, and herbs; handmade syrups, and bitters; delicate glassware; and precisely-cut ice. Similarly, these ingredients were the hallmark of early twentieth-century cocktail culture before Prohibition attempted to stamp out the lively drinking scene.

On the quiet end of Wharf Street, the first-floor bar of Central Provisions is ground zero to explore these historic cocktails. In the recently renovated historic East India Trading Company warehouse (one that undoubtedly held shipments of alcohol during its heyday), Central Provisions’ creative bar menu offers twists on classic cocktails. Here, bar manager Patrick McDonald draws from “The Bartenders Guide,” the first American cocktail book, published in 1862 and written by Jerry Thomas, considered to be the father of American mixology.

Cocktails at Central Provisions, like the Real Georgia Mint Julep, Pisco Sidecar, Silver Fizz, and Cobbler, are modern spins on Thomas’s recipes that saw great popularity during Prohibition. To channel your inner flapper, order the Corpse Reviver #3.5, tweaked with bourbon replacing the classic brandy, and shaken up with puckering Campari, dry curaçao (a liqueur similar to triple sec), and fresh-squeezed lemon juice. The result is a crisp, light-pink wake-up call, served “up” in a delicate coup glass.

Sonny’s well-rounded cocktail list offers several nods to ingredients and techniques popular before and during Prohibition. In No. 1 with a Bulleit, clouds of meringue-like foam top the bourbon cocktail, its tart lemon and lime juices tempered by simple syrup and fresh strawberries. Drink recipes began to call for the addition of egg whites in the late 1800s, where some vigorous shaking lends a rich texture to the final cocktail. Sipping on this delicate drink at Sonny’s bar, with its bank-vault-turned-wine-storage, one can imagine the lively scene in a Portland speakeasy.

At Portland Hunt & Alpine Club, where the menu provides historical tidbits about the featured cocktails, bartenders might coat your glass with an absinthe rinse or top your cocktail with float of Champagne before presenting it to you. These flourishes illustrate the lasting influence of Prohibition, during which absinthe was the darling of the young bohemian set, much to the consternation of prohibitionists. The backlash was so severe, that the ban on the sale of absinthe in the US was only recently lifted in 2007. French Champagne, like Canadian whiskey, appeared in many speakeasy drinks as it flowed into the country after American distilleries were shuttered.

Think these high-falutin’ cocktails are too much? Prefer to keep it simple with a gin and tonic or a Jack and ginger? You have Prohibition to thank for the popularity of tonic water and ginger beer as mixers as well. Because most illegally-distilled spirits were rough and cheap, so-called “bathtub gin,” flavorful tonic replaced soda water and ginger ale got stronger to mask the cheap liquor. Whatever your drink, celebrate your legal right to drink it freely and openly in one of Portland’s specialty cocktail bars reviving the lost art of bartending.