I get my love of wings from my dad, who is an aficionado. The man knows the best wings in every area he's spent time in and can make a mean wing at home (grilled!).

Since he spends so much time parked at the bar in front of a plate of wings, he offered to write-up his experiences. He lives in Norfolk, VA, and here's the first installation of the Wingman. 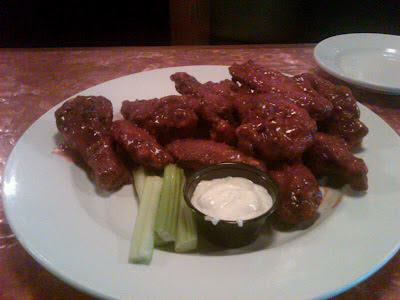 One of the largest servings around - large wings (no pigeon wings here) - good mix of flats and drums.

For Mardi Gras, I made Jambalaya for my two As. And A2 brought over Hurricanes, so we had a real Mardi Gras party!

Chicken Jambalaya
from Joy of Cooking

Season chicken with salt and pepper. Heat oil in a large stock pot (a Dutch oven ideally) over medium-high heat. Sear chicken until nicely browned on both sides, about 15 minutes total.

Add sausage slices to pan and cook until browned. Remove meat from pan and reduce heat to medium. Sautee onions, celery, peppers, and garlic, stirring until softened, for about 8 minutes.

Add rice, tomato paste, and red pepper. Cook for 2 minutes, stirring to coat. Add boiling water, tomatoes, and remaining ingredients. Return meat to the stew and reduce heat to low. Cover and cook for 20 minutes, until the chicken is cooked through. Remove cover and cook for 8 to 10 more minutes until stew is thickened.

Serves 6 to 8. You can add shrimp, ham or chorizo too. Enjoy!

Note: As my coworker said today, it's kinda hard to screw up.

While I have never been to New Orleans, and despite my Virginian heritage, don't consider myself an excellent Southern cook, I really get into Mardi Gras. This is really for no other reason than that I need something to brighten up the month of February, I look forward to making some jambalaya tonight and celebrating (what, exactly?) with my friends. 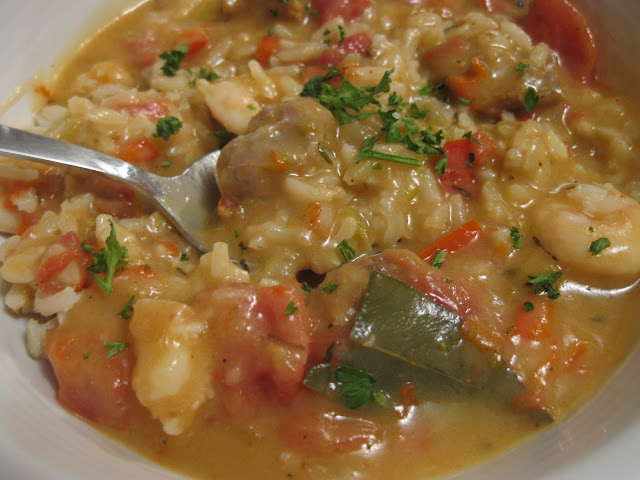 If you need some recipe inspiration, check out Emril's gumbo, Bittman's Cheddar Biscuits (perfect with sausage gravy or alongside Shrimp and Grits), and King Cake Cupcakes. 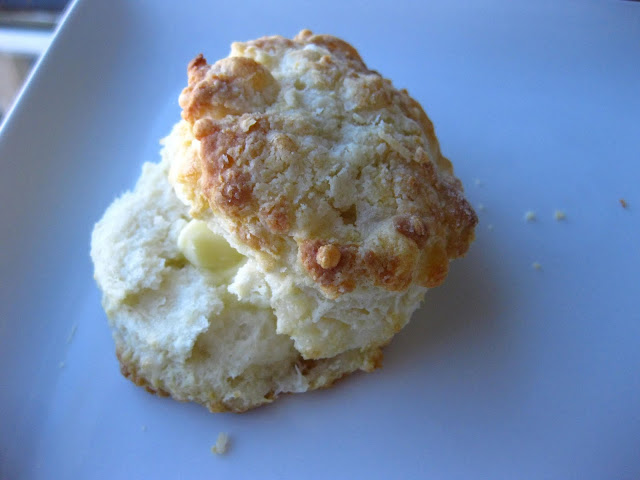 Not looking to feast at home? Check out Po'Boys and Pickles for some excellent Creole food, and they're sure to have a celebration in the restaurant tonight.
No comments:

I recently traveled to Biddeford (and got lost, natch) to teach a mustard making workshop. And since nothing sweetens travel like following up on a good food tip, when my friend A. suggested I hit his favorite pizza shop in the Bidde, I took a little extra time to seek out Pizza by Alex. 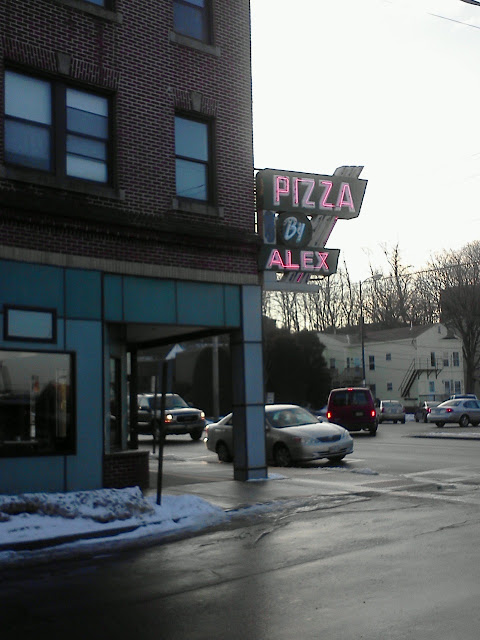 Pizza by Alex captures the lost-in-time nature of downtown Biddeford with its retro neon sign, its wood-paneled walls covered in thank you's from the local little league team, and the yellow cast from the overhead stained glass light fixtures. 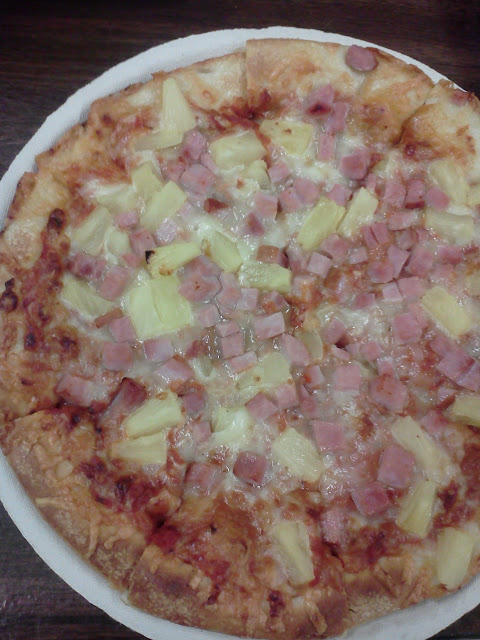 Now, I realize pizza is a divisive thing. Strong opinions abound. For some, Pizza by Alex symbolizes lazy, summer days spent at the beach, when a trip into town for that only-in-Maine pizza is the most pressing item on your agenda. Others attempt to compare this pizza to that from away- New York, Boston, New Haven... and of course, both approaches fail to appreciate this pizza on its own.

This is a unique pizza for sure. The crust is chewy and lightly sauced, and crusty burnt cheese ends spill over the edges. It only comes in one size, and other than the variety of toppings, is the only menu item.

I enjoyed Pizza by Alex; I think it'd be worth a stop if you're passing through town or looking for a lunch spot. If nothing else, it's an anachronistic experience. And who knows, you may find yourself drawn back out of nostalgia. It seems to generate that kind of response.
No comments: 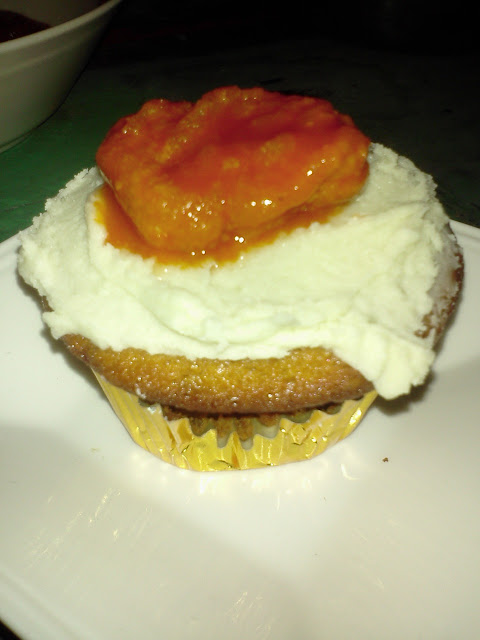 This idea came from Tosh.0 where he said you could be the grossest person at the Super Bowl party by bringing these. I clicked through his link, and thought, yeah, yuck! (Despite the note that they're surprisingly good.)

But then the idea stuck and spun around in the back of my mind all week. I decided, eff it, I'm gonna make them.

So Saturday, I made the cupcakes, and the batter and final product tasted terrible. But I pushed on.

Sunday, I made the blue cheese buttercream frosting, and my friend LBK spread it on the cakes, despite it being thick and not very spreadable. Doubtful.

Come game time, I topped the cupcakes with a popcorn chicken bite tossed in Frank's Red Hot. I then presented the platterful to a roomful of my friends, with no hopes or expectations. This recipe was so outlandish that I really didn't care if we found out collectively that they were only fit for spitting into your napkin.

But... surprisingly, the weird batter created a cornmeal-like taste and the sweet blue cheese frosting offset the spicy cake. It was great. Separately all the elements tasted gross. But together, they worked well. A Buffalo wing cupcake. Alriiiiight.

But one was enough!

Preheat oven to 350*F. Melt hot sauce and butter together in a small pan. Stir in blue cheese and whisk until melted. Remove from heat and stir in brown sugar. Whisk until combined. Let cool until not hot to the touch.

For the frosting, blend butter and blue cheese until smooth and fluffy. Gradually whip in powdered sugar.

Pipe (if you can) frosting onto cooled cupcakes. Top with a hot chicken wing bite.

Makes 10 cupcakes for 10 of your lucky friends.
No comments:

Valentine's Day: a holiday that has been discussed to death in the blogosphere, for sure. If you're looking to avoid the prix fixe affairs, but don't want to sit at home on Tuesday night like a shunned single, come check out this first pouring of Bunker Brewing Company. 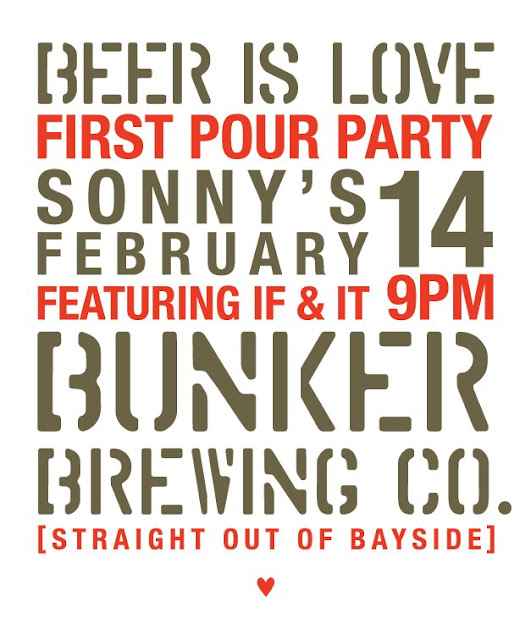 Apparently this new brewery is a project of Jay Villani's of Sonny's and Local 188. In addition to the beer, I'm looking forward to some man spotting. I was disappointed by the clientele at the last Local 188 beer event I went to- the Estrella Dam release was just a lot of suits talking to each other. Hopefully the later hour and the hipper location will draw a younger crowd that's looking to talk (helloooo, I'm cute, and I like beer!!).

If, however, you need to find some of that prix fixe shit, check out the Maine Today round-up and, as always, the ever comprehensive Portland Food Map.

This is the first installation in the O-rama series, a collective project in which food bloggers write on a theme.
No comments: 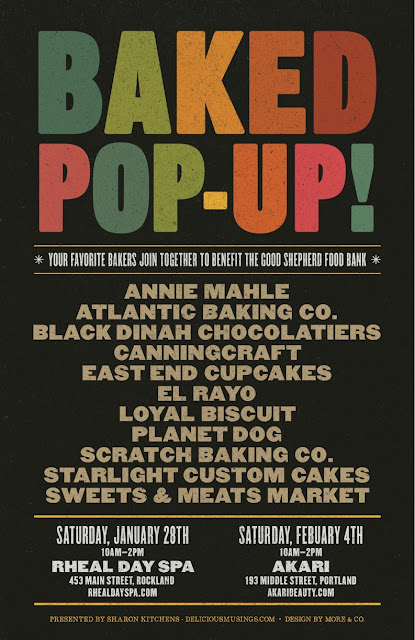 This Saturday, February 4th, come get your baked goods for charity at Akari Salon. All proceeds will go to Good Shepherd Food Bank, thanks to Sharon at Delicious Musings and your need for sugar.

After all, what better way to kill time until the Super Bowl?
No comments:
Newer Posts Older Posts Home
Subscribe to: Posts (Atom)