How to Make Kombucha, Kefir, Kvass - Plus a Workshop!

It is so very nice and warm here in Southern Maine this week. This is my summer sweet spot - super hot out, enough to make the chilly ocean water bearable for a quick dip.

You know what else loves this hot weather? The microbes that power fermentation! I'm teaching a workshop on fermented beverages at Whole Foods in Portland this Thursday night (sign up here - only $20!) and so I've started a bunch of fermented projects to have as samples in the class.

I started with kombucha - my favorite fermented beverages (ok, ok, aside from beer - I should say my favorite N/A fermented bev). The only tricky part of making your own kombucha is getting the starter or SCOBY.

Since I didn't know anyone who had SCOBY to spare (now I do - they tend to come out of the woodwork when you start talking about fermenting), I had to try to grow my own. I simply brewed one cup of organic, black tea, added two tablespoons of sugar, and a 16 oz. bottle of unflavored, raw kombucha. I used GT's, but the local Urban Farm Fermentory's stuff is probably fresher and less processed.

The SCOBY seems to love the heat - after four days, there's a thickening layer of, well, gelatinous goo forming on top of the liquid. Kombucha is not for the faint of heart, frankly.

After about a week, I can transfer my homegrown SCOBY into a new batch of sweet tea with a little more kombucha (to help kick off the fermentation - a process called back slopping) and let it ferment. After a week to ten days, I'll have a big batch of kombucha, ready for flavoring or drinking as is. Buying bottled kombucha can be an expensive habit, but fortunately making your own is crazy inexpensive.

Kombucha is kinda mainstream these days. Hardcore fermenters are into kefir or even kvass. You may have seen dairy kefir at the grocery store - a commercial product frequently loaded with added sugar and sold as a smoothie-like product. The real stuff is extremely tangy and not very sweet, like yogurt on steroids.

Water kefir (pronounced kuh-FEAR) is different - a fizzy, mildly sweet beverage that I liken to a fermented lemonade. It's delicious, and can easily be made with some sweetened water and the kefir "grains" - a colony of bacteria and yeast. Dairy and water kefir are produced with different types of grains, so make sure you order accordingly. Either way, order the live grains or get some from a friend - I tried to rehydrate dried grains and they never woke back up.

I ordered live kefir grains and when they arrived, mixed them into some spring water (my tap water is chlorinated and could kill the bacteria and yeast) with some organic, raw sugar. I added one tablespoon of sugar to one cup of water for every tablespoon of grains that I had (so two cups water, two tablespoons of sugar and grains). Kefir is an anaerobic ferment, meaning it needs to go into an airtight container, as it won't work in the presence of oxygen.

My first batch of water kefir was ready in two days - it's on its second ferment, the one that amplifies the fizz. The grains have gone into a new batch of sweetened water, this time with a knob of ginger, as I'm hoping to liven up the grains' production a bit. (They're often slow to grow after being shipped across the country. Understandable.) It will be ready to drink in another day, and I'll keep in my fridge.

Beet kvass was by far the easiest of the beverages - it's simply chopped beets in salt water (two large, organic, peeled beets, roughly chopped and stirred into 8 cups of water with 4 tablespoons of sea salt).

I'd say, like many fermented beverages, kvass is an acquired taste. It's salty and beety. Americans typically don't drink salty beverages, so at first sip, it's like drinking vegetable broth. I hear one's body begins to crave it, but I've yet to push on through to that point yet. You'll have to whip up your own batch to see if you want to hop on the kvass train. 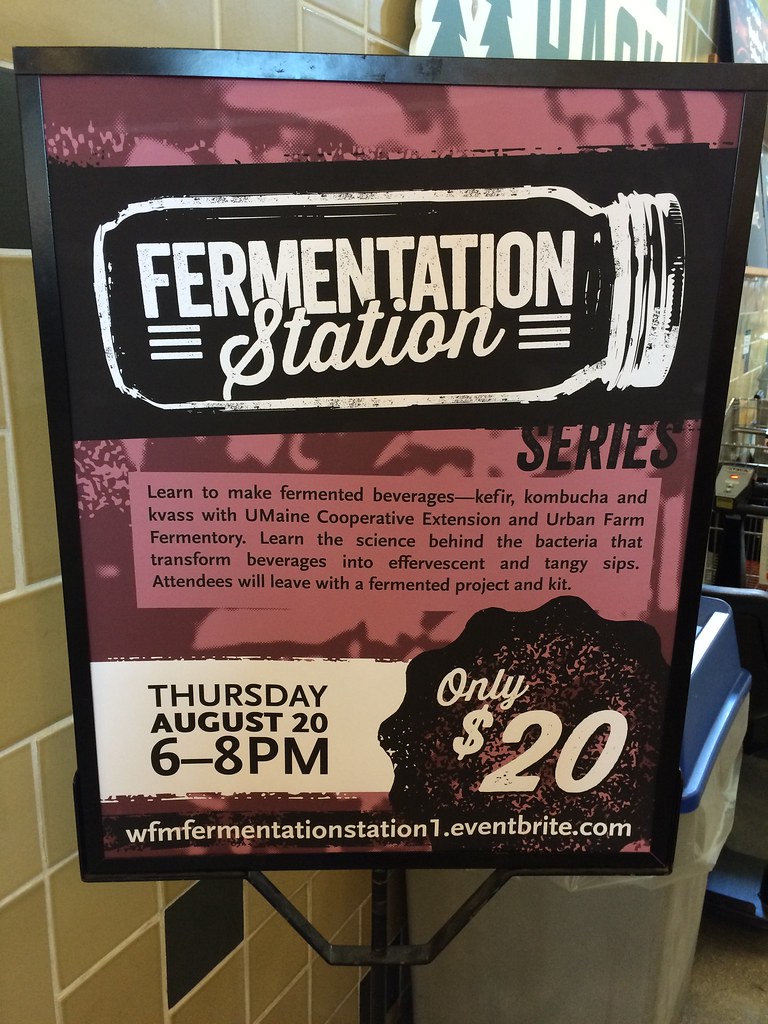 If you're interested in learning the specifics of these three fermented beverages, join me at Whole Foods in Portland on Thursday at 6pm. Get your ticket at wfmfermentationstation1.eventbrite.com. I'm also teaching a fermented vegetable and a quick pickles and refrigerator/freezer jam workshop there in September and October, so stay tuned for those details.

So far I'm buoyed by my success in the world of homemade fermented beverages. Give it a whirl - none of these projects are very expensive, and if they work, then you have delicious, healthy drinks for these hot summer days!