Now for my recent experience at Boone's... I have to be honest: I have a rather tortured relationship with The Rooms. I've enjoyed several meals at the Grill Room and the Corner Room, but the Front Room always seemed to fall short of the ravings I hear over their brunch.

For those unfamiliar, The Front Room, The Corner Room, The Grill Room, and Boone's Fish House & Oyster Room are all owned by Chef Harding Lee Smith, a polarizing figure in Portland's restaurant community. Despite all the dust-up over the chef's personality and politics that the Bollard aired a few years ago (we don't need to revisit the links; if you missed it, google it), I continued to occasionally visit the Rooms for their happy hour where cheap wine and a free appetizer spread proved difficult to resist. But none of the restaurants ever made my short list; the food always seemed... generic, frankly, and so I never found myself drawn to return very often.

When the boyfriend suggested Boone's for his mom's birthday dinner, my first response was, no way. Then I thought, ugh, don't be such a B, give it a shot. It's a nice restaurant on the water, and I wanted to have an open mind about the food there. I called and made a reservation for a Monday night - I asked to sit outside, but they don't make reservations for the outside decks. So we crossed our fingers and went.

If you want to be all TL;DR about it, the takeaway is that the food is fine, the service was not so fine, and I was unfortunately not impressed despite trying to find a silver lining.

Really the tone was set as soon as we sat at our table. After sorting out the lost reservation mix-up (albeit one with no consequence), we were seated on the deck - it's a busy area with a casual vibe, so perhaps I was on edge, wanting the evening to be a special occasion, not just a weeknight dinner out. But after about ten minutes of waiting with no sign of service, I returned to the host stand to let them know the issue.

Our server came over a few minutes after I returned to the table, and I am going to try not to exaggerate for sympathy - offered a dismissive comment and poured our waters in silence. No, hi, how are you? Can I get you drinks? Sorry for the wait... She just offered an excuse, I guess? about what she was doing rather than waiting on us. I was frankly flabbergasted. I then was a friendly as possible, wanting the vibe at the table to be a positive one, but inside, I was pretty annoyed. 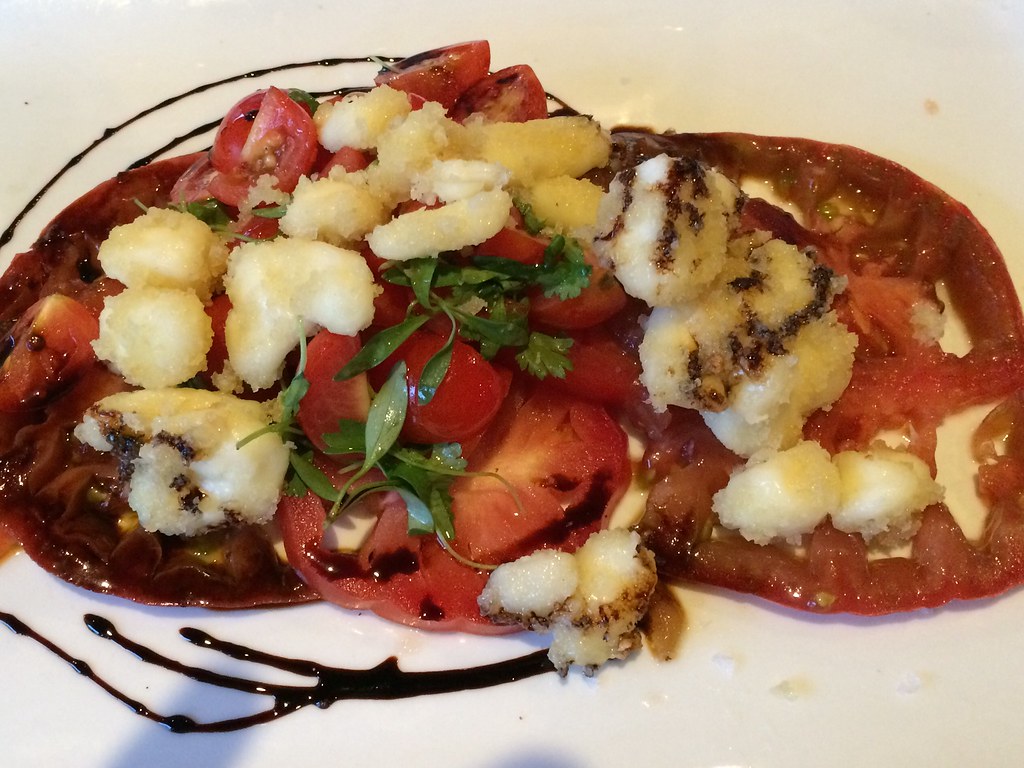 Despite the meal getting off to a bad start, the rest of our experience was fine - we enjoyed each others' company and the server didn't offer much more to our table in terms of personality (good or bad). I liked this tomato salad (a special), with balsamic vinegar and fried cheese curds. The Bang Bang shrimp, fried with a spicy creamy sauce, was crunchy but kind of bland for the genre. 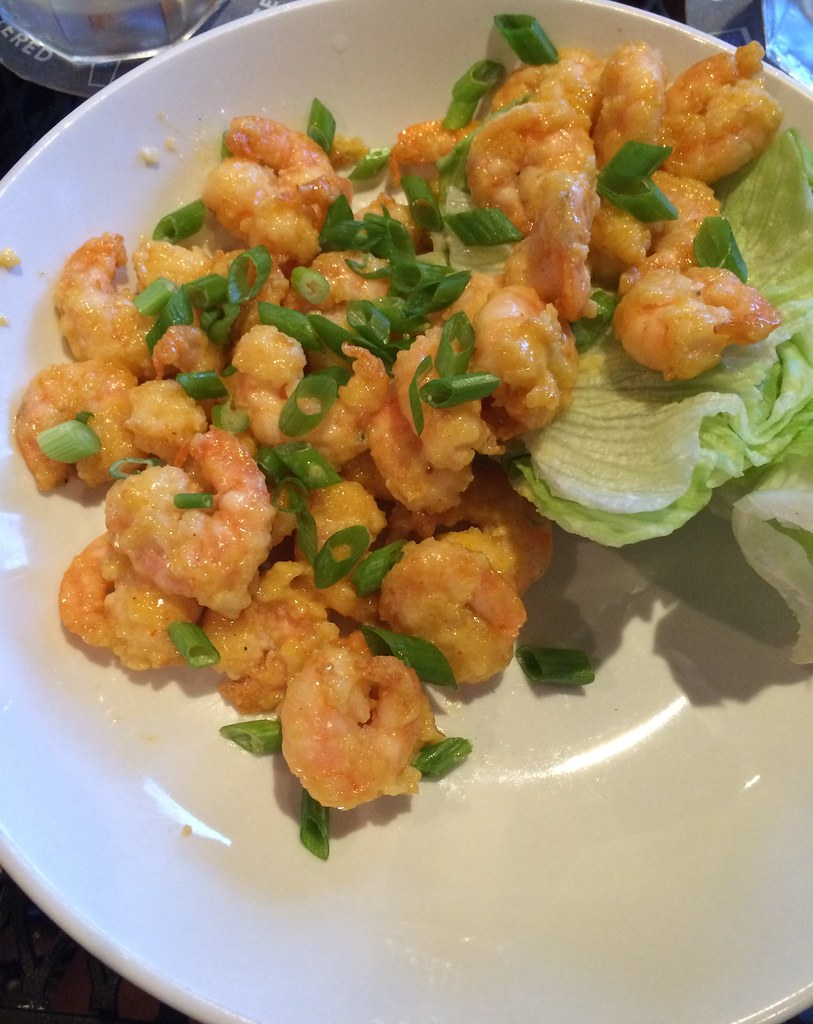 The men enjoyed fish and chips - not the best plating I've ever seen, but again, the food was fine. 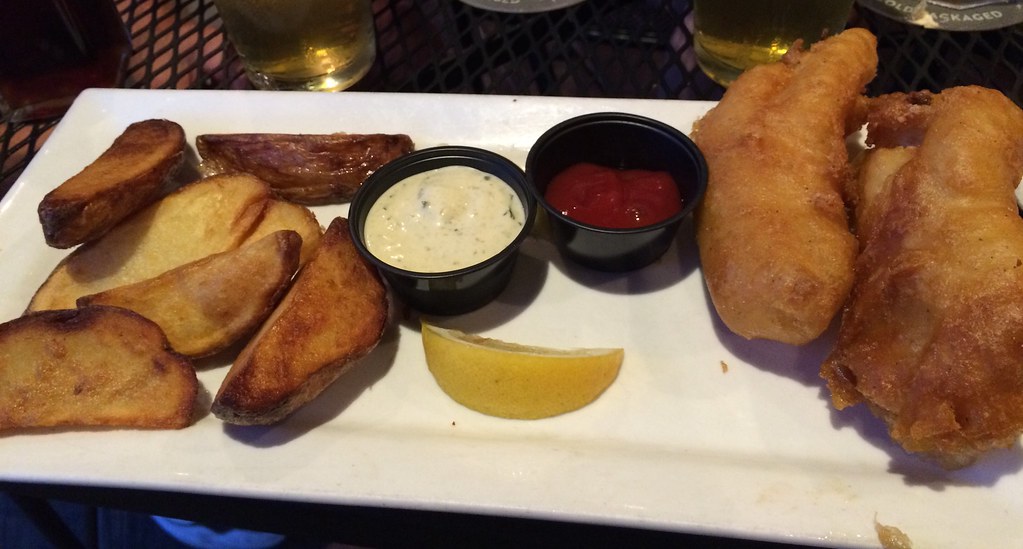 My wood-roasted monkfish over beet puree with potatoes, edamame, bacon lardons, and fingerling potatoes (so succotash, basically) was good - the monkfish is very meaty, almost like a chicken breast. It was smoky and the puree lent a nice sweetness.

As an aside, the fish at Boone's is served a la carte, so I appreciated this special dish that was already put together. It seems like work to have to assemble fish, sauce, and sides from the menu, where I'd rather see what the chef and cooks thinks goes well together. 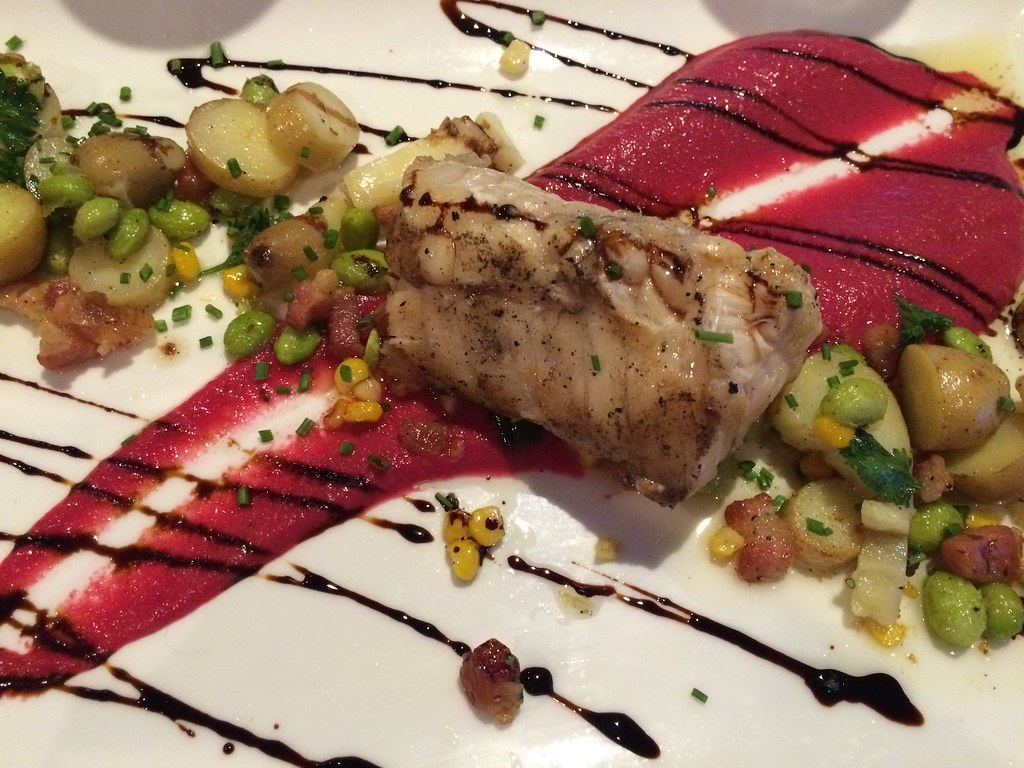 The birthday gal enjoyed the wood-grilled chicken, served over a huge portion of mashed potatoes and sauteed spinach. We didn't stick around for dessert, but headed to Captain Sam's for an ice cream cone and a nice stroll down relatively quiet Commercial Street.

Our meal was probably close to $200 after tip (dinner was on the boyfriend's dad, so I didn't see the check), and I came away disappointed with the experience overall. I believe Boone's bills itself as a relatively finer dining restaurant - at the very least due to the menu prices. But with salt sprinkled on the floors to create traction on the otherwise slippery floors (due to the humidity - it's a waterfront restaurant, so it's pretty much always humid), the state of the bathrooms, and of course the lackluster service, the details that would otherwise make it a fine dining experience were just not there.

Bottom line: I unfortunately had my low expectations reinforced and believe that if you're looking for local seafood or a fine dining meal, you're better off headed somewhere else in Portland than Boone's. Now I know!