On the way to the Outer Banks of North Carolina for our annual week at the beach, A. and I made a detour to St. Michaels, on the Eastern shore of Maryland, to revisit some of my old haunts and to check out some new ones. I lived there almost ten years ago (!!), teaching sailing at the Chesapeake Bay Maritime Museum. Since I left, there's new restaurants, a craft brewery, and even a small distillery, but perhaps unsurprisingly, the crew at the only bar in town is still the same.

I first tried Lyon Distilling Co.'s rum when I visited Maryland in the spring, heading to two liquor stores in the Baltimore area until we found a bottle of their dark rum in stock. It's a sweeter rum with a rich caramel flavor, and it mixes well with a spicy ginger beer or in a tart Mai Tai. It's also delicious sipped on its own. 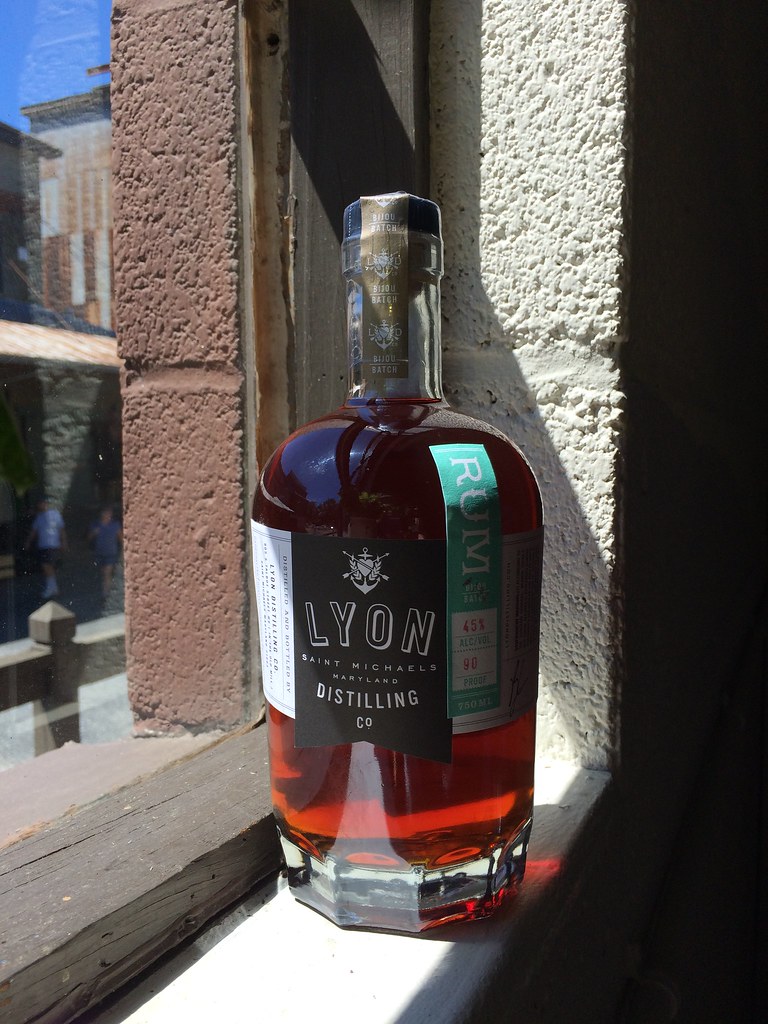 On the day of our visit, we rode our bikes from the maritime museum down the main street to the old mill district - where the brewery, winery, and distillery are conveniently grouped together. I didn't even known about these mill buildings when I lived there, but much like Maine's mill towns, these old buildings have been turned into studio spaces, boutiques, and makers' shops. 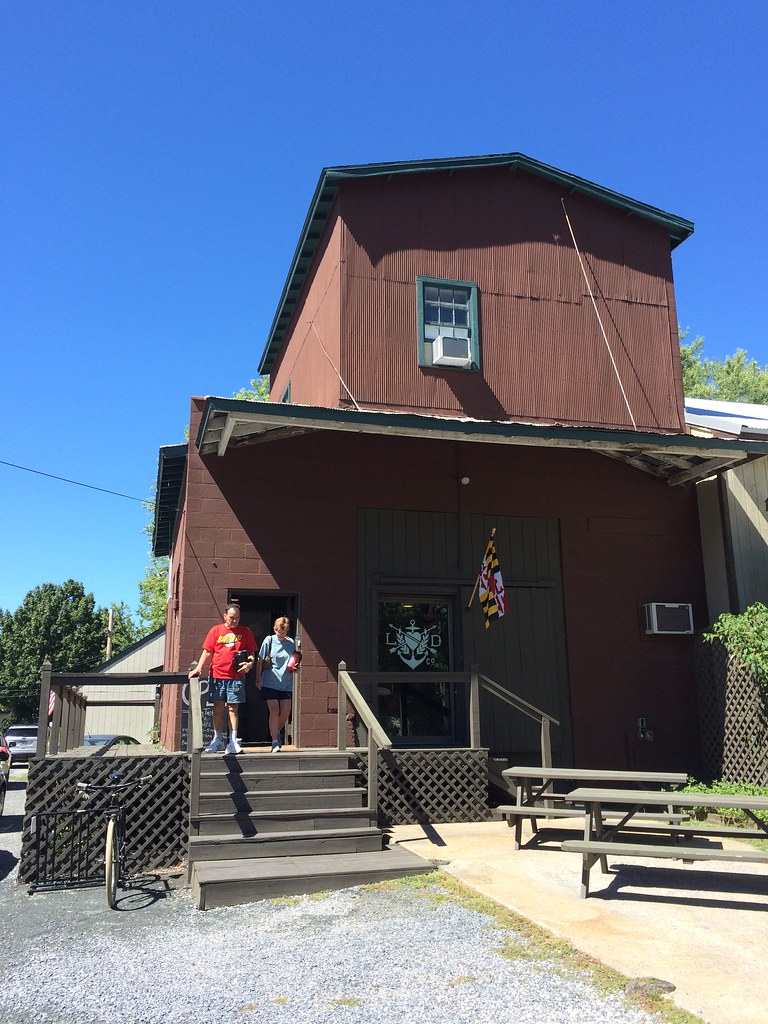 The tasting room of Lyon Distilling has a great industrial feel, and while there's just tastings of the spirits on offer, it would be a lovely spot to hang out for a while and enjoy a drink. There's a library of craft cocktail books - A. picked up a copy of And A Bottle of Rum by Wayne Curtis and I eyed Forgotten Maryland Cocktails: A History of Drinking in the Free State by Gregory and Nicole Priebe (another History Press book!). 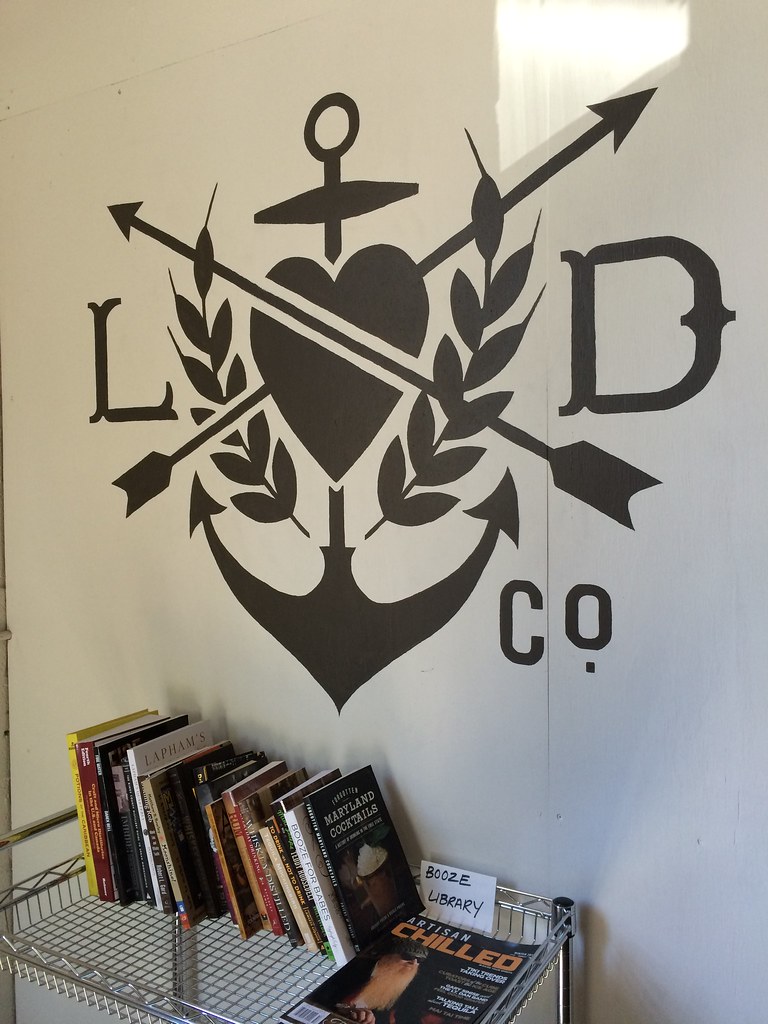 We tasted small sips of the unaged rum, the dark rum, and the Sailors Reserve - rum aged in used Bourbon barrels. The unaged rum is very bright - it's made from cane sugar and molasses, while the dark rum is sweeter, with some homemade caramel stirred into the rum.

The Sailors Reserve is a higher proof and not as sweet, due to the aging in bourbon barrels. We even tried the corn whiskey, surprisingly sweet for a white unaged whiskey, and were excited to learn of a rye whiskey in the works. 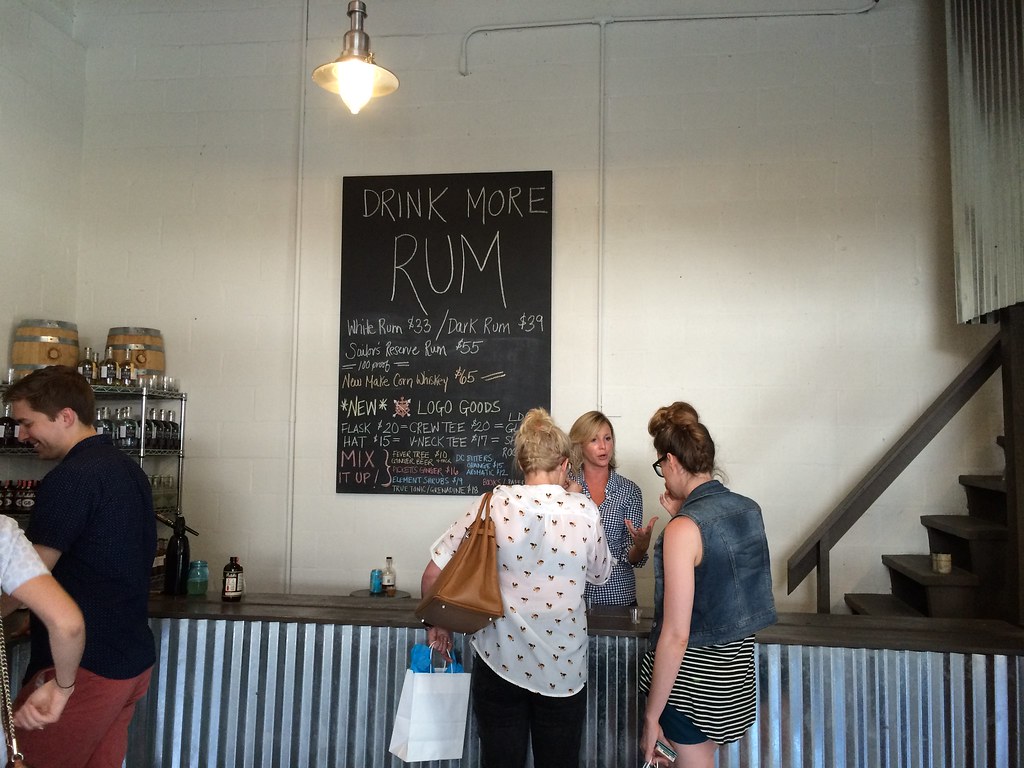 After the tasting, we were off on a tour of the distillery - and it was the cutest, smallest distillery I've ever seen.

Our tour guide was Jamie Windon, the very enthusiastic partner of Ben Lyon, and the other distillery owner. Her sister works in the tasting room and the three of them (plus an intern) are the only employees. Windon works on the sales, distribution, and administrative stuff, while Lyon distills - making 5,000 gallons a year - not a lot for a company, but a lot for one man, Windon laughed. 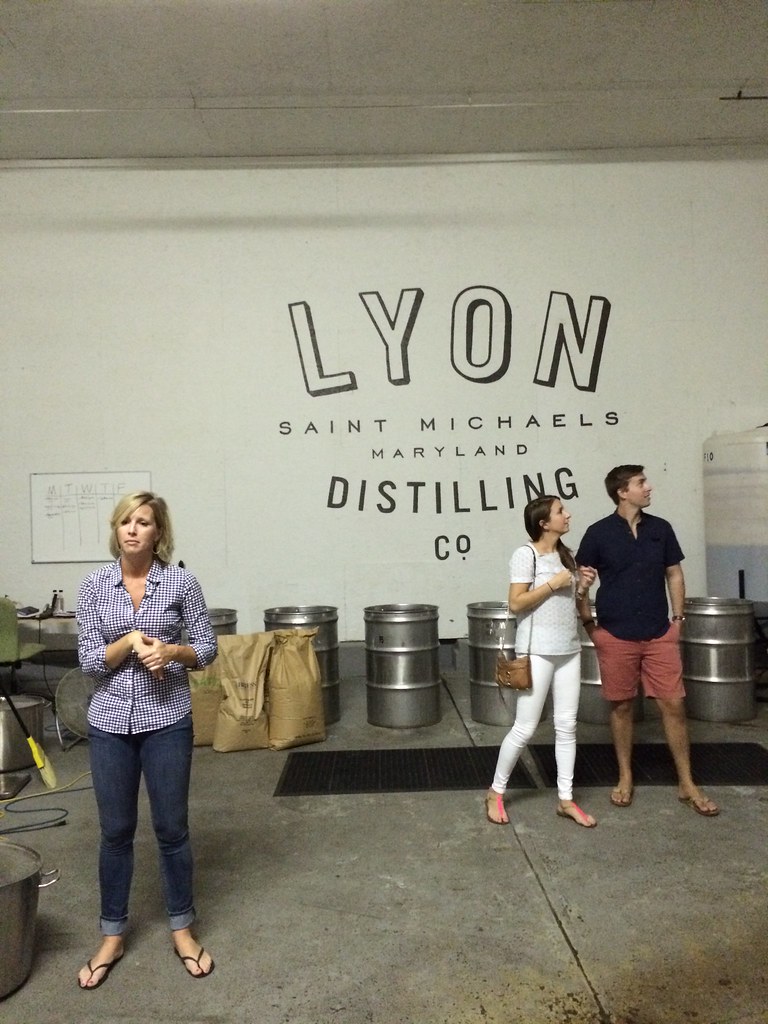 Lyon and his one employee ferment molasses, sugar cane, and water in 55-gallon drums for a few days, then distill the rum wash in a series of small pot stills. These small columns on the stills help to keep lots of flavor in the final spirit, so they're used for whiskey and rum over the taller column stills that help make more neutral spirits like vodka. 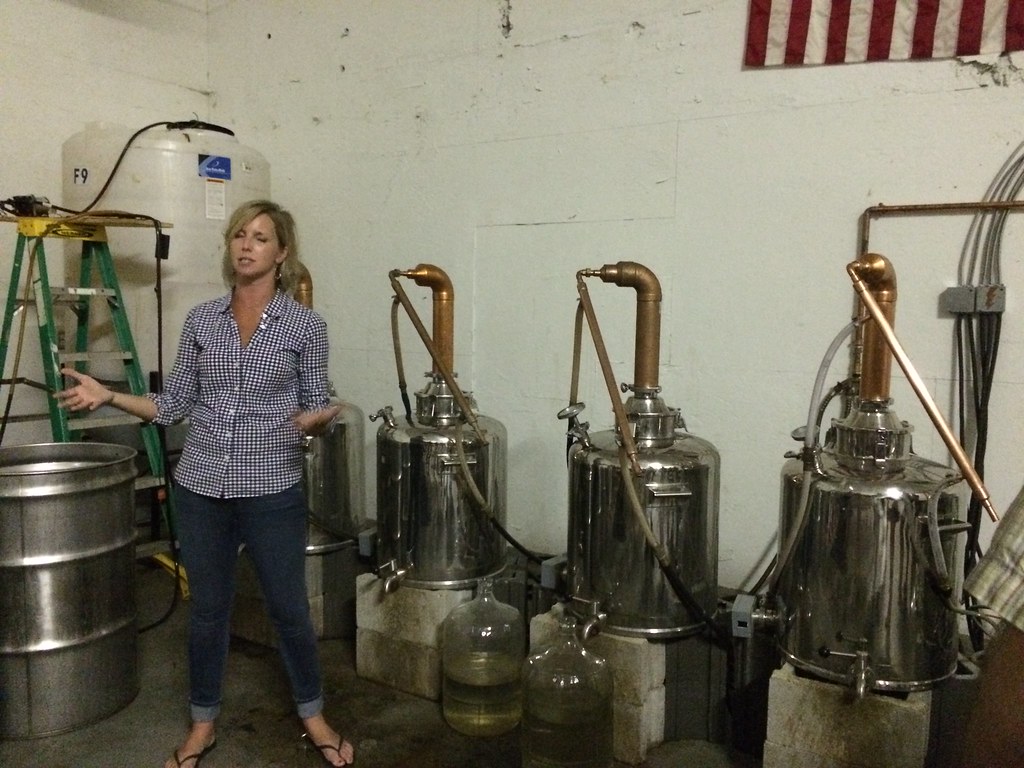 After the rum is distilled, the clear rum is aerated and bottled, while the dark rum has some homemade caramel added to the batch. Lyon melts some of the cane sugar that's used to make the rum and lets it caramel, before dumping it into the rum. The Sailors Reserve is aged in small one or three gallon barrels - the picture below shows the bulk of the barrels that Lyon Distilling uses. 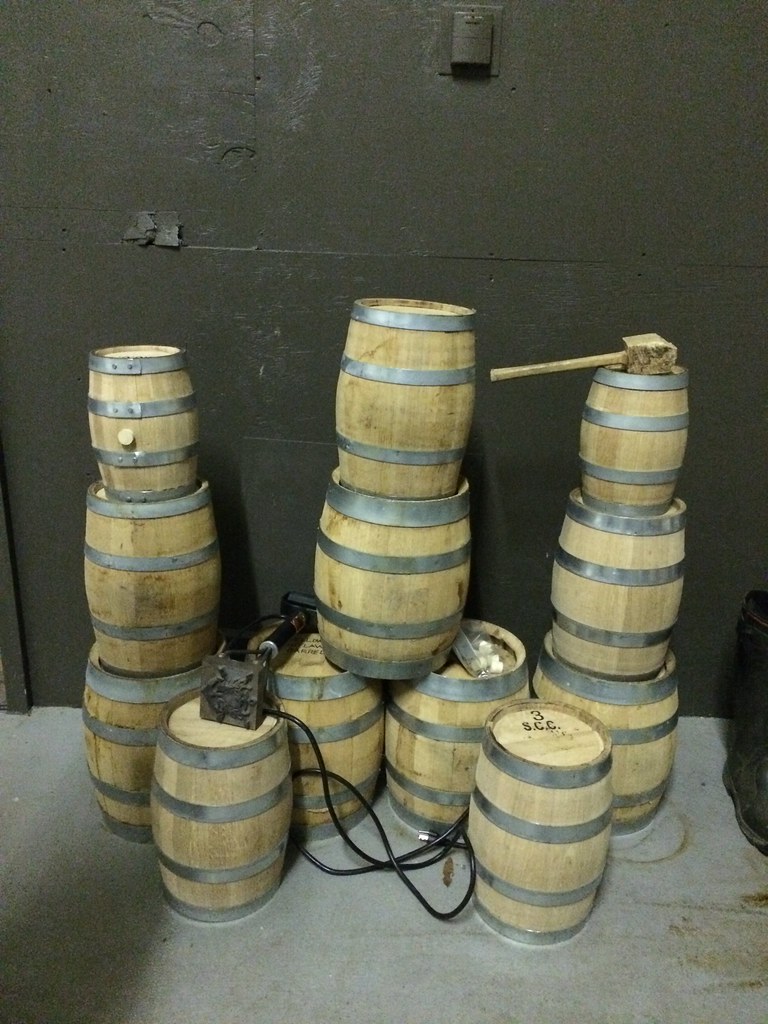 Right now, Lyon rum is found in D.C. and Maryland, but the bottles sell out frequently, so your best bet is to head to the distillery. We enjoyed a local Dark and Stormy at Eva's in St. Michaels later in the evening, then headed to Carpenter Street Saloon for a few Yuenglings and to watch the preseasons Ravens game.

Fortunately for my nostalgia, not much has changed in St. Michaels since I lived there, save for the the welcome addition of a fantastic craft rum distillery, and it's hard not to be happy with that kind of growth.