Before the small tasting room was roughed out of the industrial brewing space, Geary's offered tours daily, but there was no retail space in which to relax and enjoy a sampling of their beers. Of course, breweries are working spaces, with things to trip over, slip on, get your fingers caught in, etc., so Geary's tours were previously limited in size and scope. While some would like to venture into the brewing space and hear about specific gravity and malt profiles, others would rather simply pull up a stool and sip on a few brews. The new tasting room and continued tours will allow you to do both!

During the grand opening, the staff at the tasting room was pouring 6 beers, and I sampled the Autumn, a brown ale; the London Porter; and the cask-conditioned Hampshire Ale. I enjoyed the gentle, malty flavors of Geary's beers, but then was grateful to have the Maine Brew Bus as a shuttle to get home! The 7% ABV Hampshire Ale began to catch up with me by the time the shuttle was due to leave.

The Maine Brew Bus drove us back to the Great Lost Bear, another cornerstone of Portland's early craft beer scene. On the way, owner Zach Poole and VP of Operations Don Littlefield entertained us with the story of the Brew Bus' origins and tidbits about Maine's craft beer scene. While I was only onboard for a total of 30 minutes or so, Zach and Don impressed me with their knowledge of both the beer-side and the business-side of the craft beer industry in Maine. The Brew Bus offers not only beer-themed tours, but features other exciting locally-made brews like craft spirits, kombucha, and mead. I'm looking forward to checking out a full Brew Bus tour soon - let's call it research for my second book! 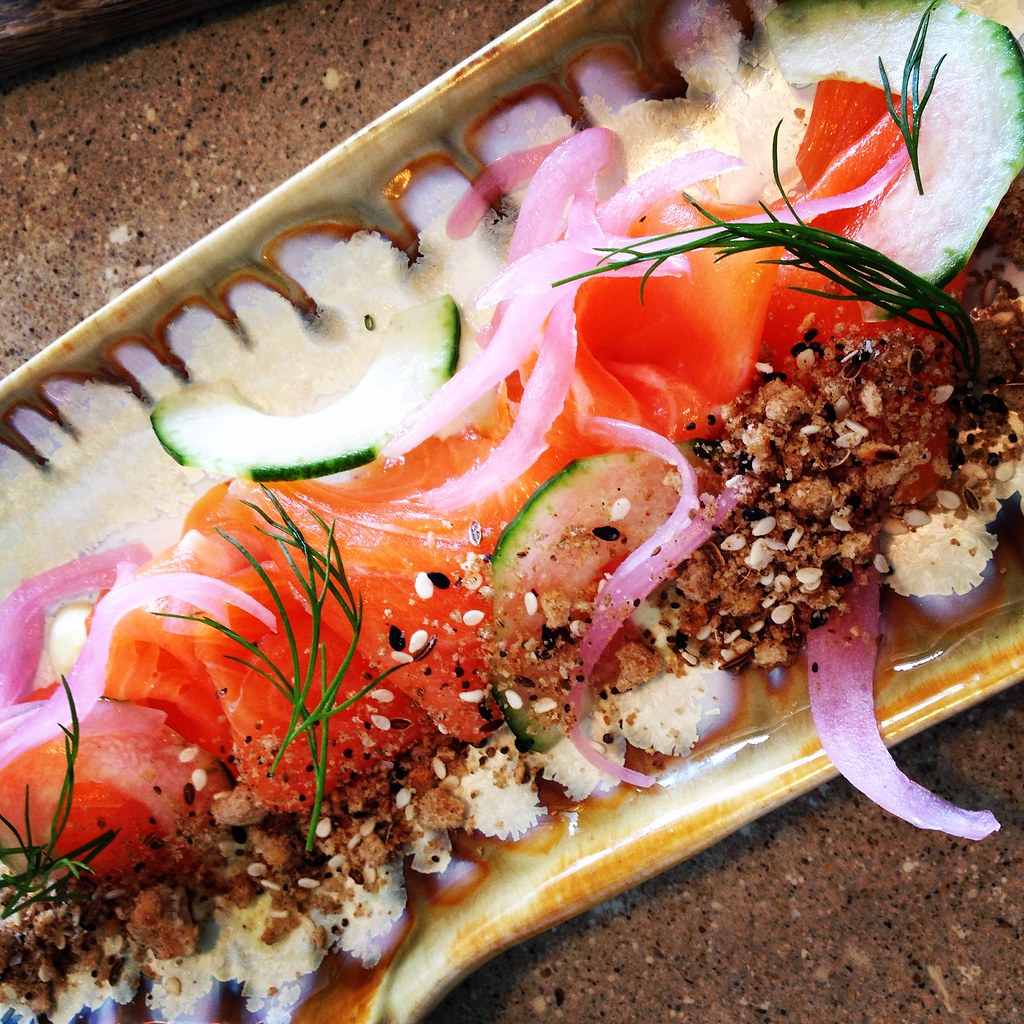 Similarly in the "showing off Portland" category is a recent meal I enjoyed at Eventide Oyster Co. Every time I eat there, the food and service solidify the place in my Top 10 Portland restaurants. I went for lunch with a journalist, who interviewed me for her upcoming book about what makes a place "home." I figured with all of the people I interviewed for my first book, I needed to return the favor by contributing to someone else's research!

My connection to the food scene was obvious in thinking about what makes Portland my home. My love affair with Portland was ignited by the incredible food and drink scene I discovered upon moving here. And nowhere is that sense of place through food expressed better than at Eventide. Local this, local that; in tune with the seasons, the land, and the ocean...and of course, tasting great at every step.

We sampled lobster rolls, lobster stew, the chickpea fries (mandatory), the arctic char special (pictured above), and the razor clam special. Thin slices of char gravlax came piled up next to cucumber slices, pickled red onions, dots of creme fraiche, and dill fronds. "Everything" crumbs (like the bagel flavor) sprinkled on top gave a nice crunch. 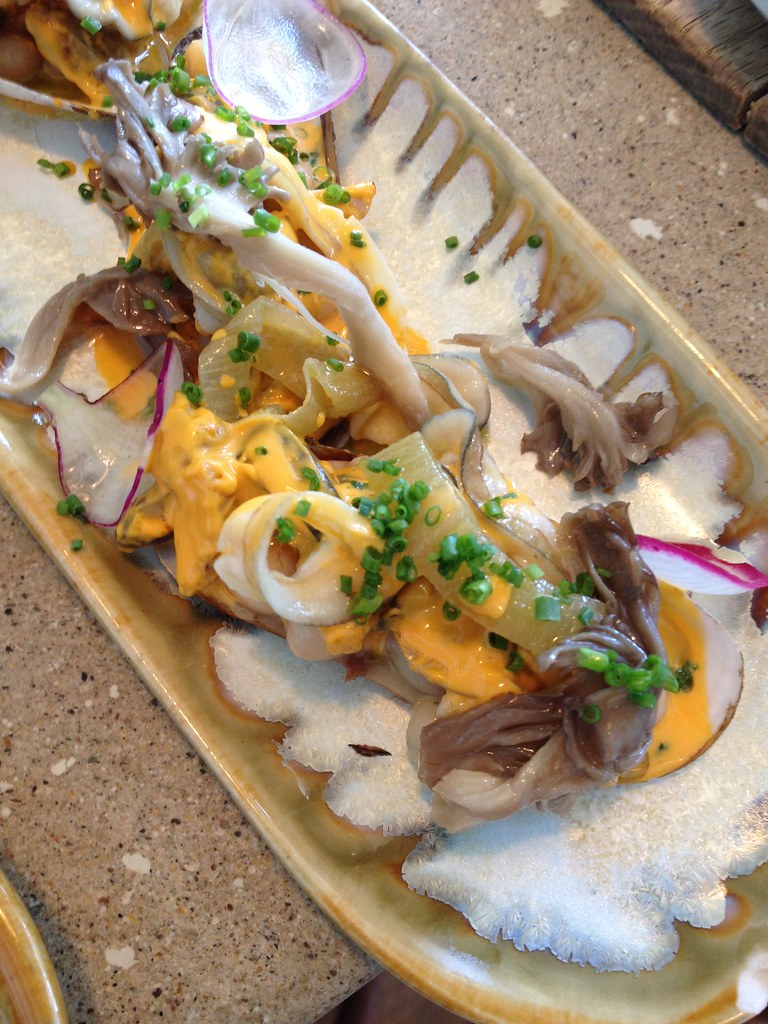 The razor clam special was another standout, with white beans and clams drizzled in a thin, slightly spicy orange sauce, and topped with pickled mushrooms, and thinly sliced radish. It was frankly not even something I thought sounded very appealing! But it was a great parade of textures and flavors, further proving one should trust in the great all-knowing chefs of Eventide.

Farm fresh produce is overflowing at the farmers' market...but this is the time of year when it's here one week and gone the next. If you've got your eye on preserving anything or getting in one last gorging on a seasonal dear like tomatoes, sweet corn, or green beans, get to the Portland Farmers' Market ASAP - either tomorrow in Monument Square or Saturday in Deering Oaks Park. 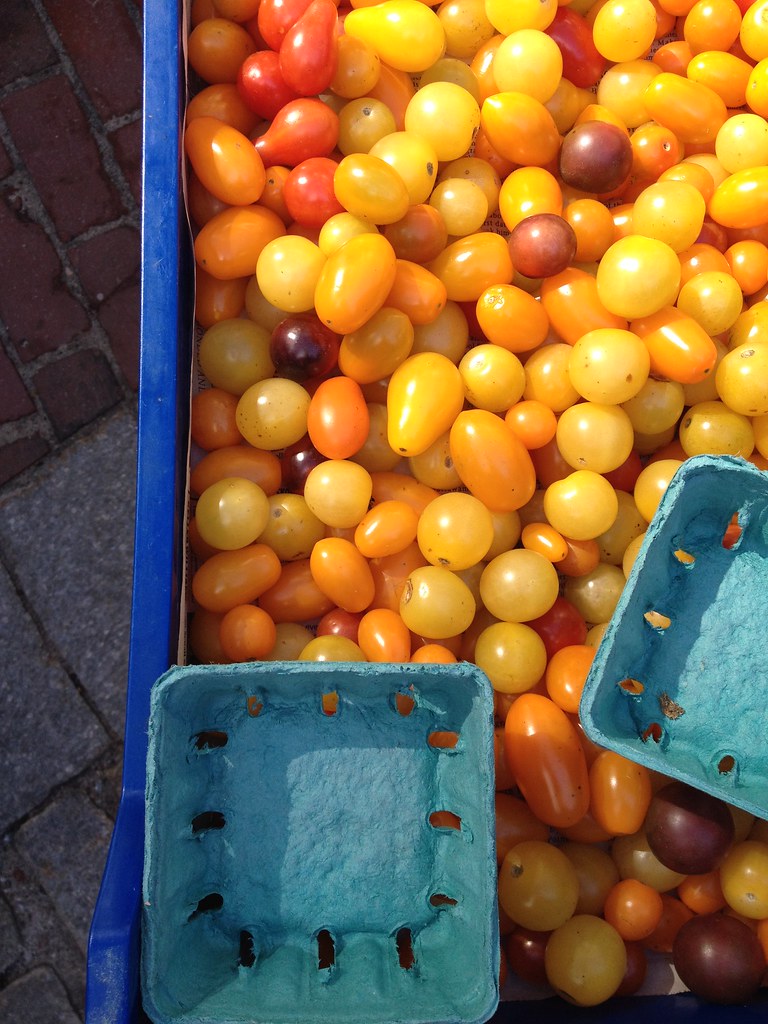 And speaking of seasonal dears, I made it to The Well at Jordan's Farm - I am nothing if not motivated by deadlines, as we eked out a dinner on the second to last night of service before the restaurant switches to weekday lunches.

The Well at Jordan's Farm is a restaurant on the farm - Jordan's Farm in Cape Elizabeth. The kitchen is in a small shed-esque building, encompassing not much more than the kitchen line and the counter at which you order. Chef Jason Williams, formerly of the Back Bay Grill, approached farmer Penny Jordan a few years ago about starting a seasonal restaurant on the farm, using the farm's produce. Penny agreed and the restaurant has been a huge success ever since. Think Back Bay Grill quality food, but served in a picturesque Maine farm field.

The evening's menu is written on a chalkboard sign as you approach the gazebo kitchen. We were able to choose a pork, fish, chicken, or vegetarian entrees and then just one salad, appetizer, and dessert option. Nice and simple.

Our first round of food was delivered to us while we enjoyed the bottle of wine we brought (water, cups, and wine bottle openers are provided). We ordered several plates of the salad ($8) and lamb sausage appetizer ($8) to share. The salad greens were dressed with an aged balsamic vinegar with golden beets, Stilton cheese, grilled onions, and "crumb"tons or (crushed croutons). It was a fresh, simple salad that reminded me how delicious salads can be (I'd fallen out of love with salad greens over the summer). The lamb sausage appetizer was very juicy, perched on a piperade or a pile of thinly sliced peppers.

While we waited for our entrees though, the sun began to set over the farm fields and the mosquitos descended. Our gracious server got the 5 of us set up in the gazebo-built-for-4 by squeezing in some stools so we all had a seat. Once enshrouded in mesh screening, we relaxed and enjoyed our meal once again. 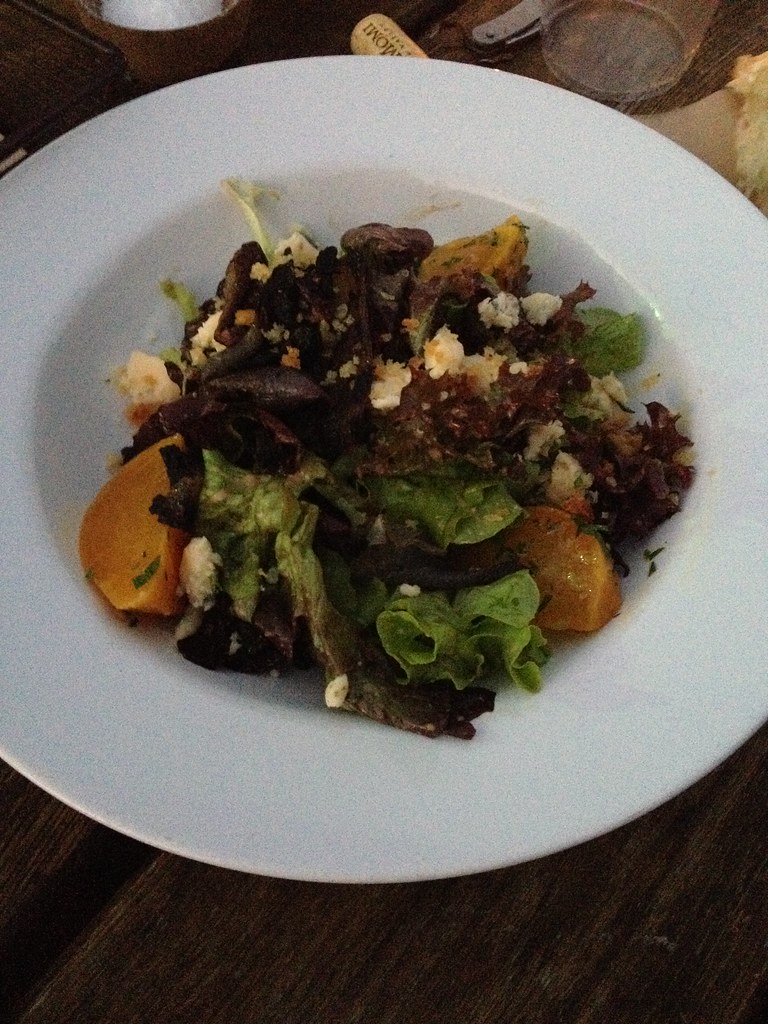 For my entree, I ordered the hake with a side of farro, roasted cauliflower and romanesco (cauliflower's fractalized cousin). The fish ($24) was also simply prepared, with tender flakes of fish filet held together by crispy skin. Elsewhere around the table, friends were declaring the chicken with squash puree, potatoes, and chard ($23) "the best I've ever had," and nibbling on strips of pork fat that accompanied the giant pork chop set over cranberry beans and braised red cabbage ($26). Everyone's plates were scraped clean, and we pushed back from the table, only to finish our glasses of wine and ponder how many apple compote donuts ($9) we were going to need to order (answer: 3). 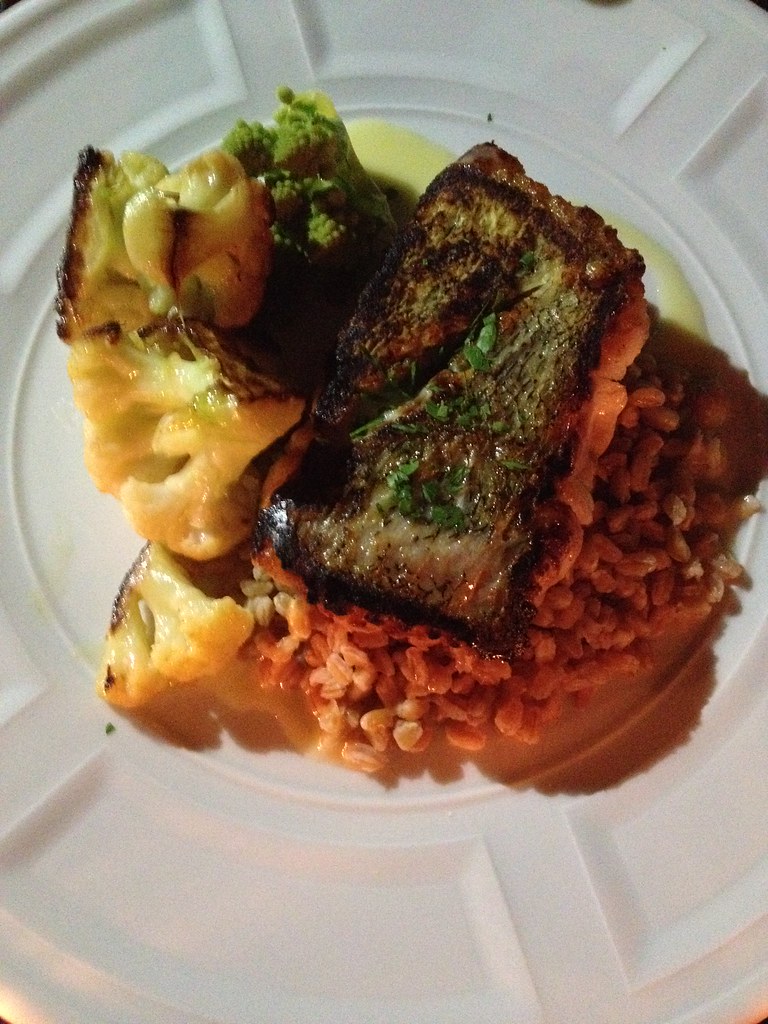 By 8pm, we were not the last people lingering outside under the darkening fall sky, warmed by the glowing lights of the cozy restaurant kitchen. After admiring the clear night sky, in which the Milky Way was visible, we hopped in our cars and headed back to Portland.

The Well at Jordan's Farm served its final dinner for the season last Saturday. But they'll be serving lunch on weekdays, starting October 1st (tomorrow!), so it's not too late to try some of Chef Jason Williams and crew's simple, local fare. Be sure to grab a taste of summer's fleeting experiences before we settle fully into fall, whether it's via the farmers' market or directly on the farm at The Well.