It's been a few years since my last survey of the food truck fleet in and around Portland, Maine, and as you'd expect from these mobile eateries, a lot has changed since then. Here's an update of who's slinging food from a truck/cart this summer and where you can expect to find them.

Businesses are listed in alphabetical order, and bonus details about special food truck events this summer are featured at the bottom of the post. 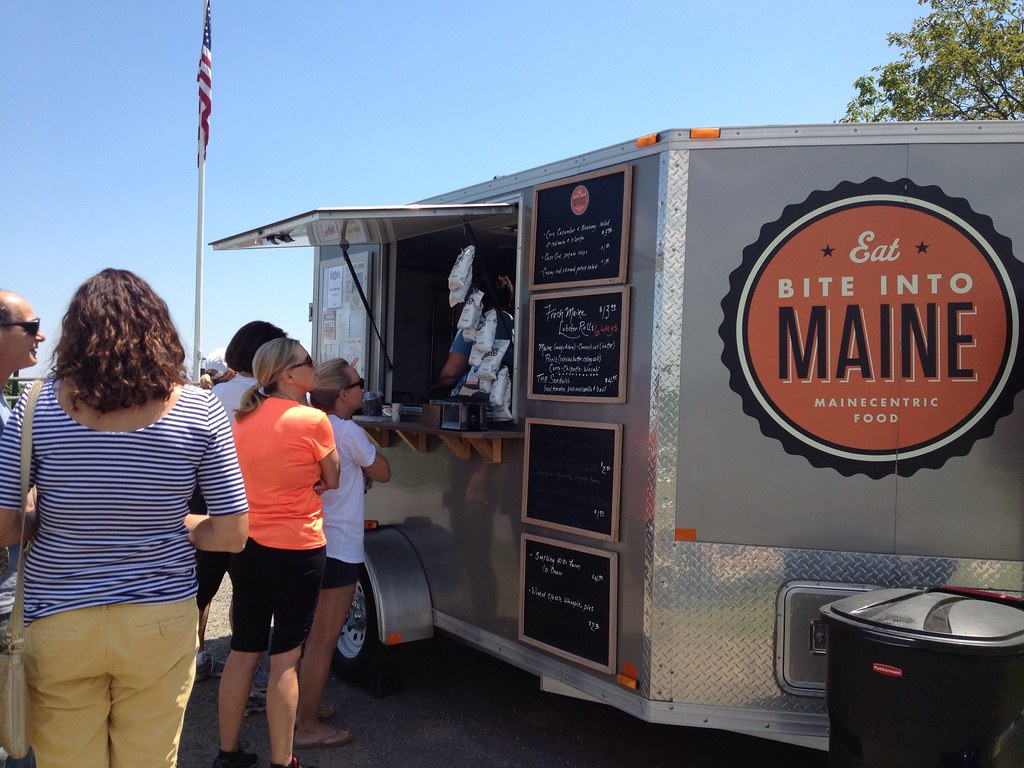 Bite Into Maine - The OG food cart returns for its 8th season in Fort Williams Park in Cape Elizabeth, serving several styles of lobster rolls. Since the cart's start, BIM's locations have expanded to a year-round commissary in Scarborough and an Airstream trailer at Allagash Brewing that opened in April. The Fort Williams cart opens May 4th. Come high season, the cart and trailer will be open daily, but check the website to confirm.

Cannoli Joe's - This dessert truck is out serving several different flavors of cannolis like White Chocolate Raspberry, Sicilian, Chocolate Peanut Butter Pretzel, and even Piña Colada. Find them parked on the Eastern Prom and Commercial Street at the bottom of India Street from 11am-4pm.

Eighty 8 Donuts - Winters takes this mini donut business (formerly Urban Sugar Donuts) to its Sugarloaf brick and mortar shop. Come summer, Rosie the donut truck is back in action in Portland. The truck's season kicks off at Street Eats and Beats June 1st. Find these tiny delights this summer at Thompson's Point, the Eastern Prom, and special events.

Falafel Mafia - This vegan Mediterranean food truck serves up pitas and bowls of their falafel topped with tahini and pickled and fresh vegetables. Find them on the Western Prom, at Spring and Temple Street, at various breweries, and in the Back Cove Hannaford parking lot, as well as Thompson's Point concerts and other special events.

Fishin' Ships - This nautical, pun-riddled fried seafood truck kicks off its season at Street Eats & Beats June 1st, launching into a busy season. They be at Rising Tide and the Industrial Way breweries and special events throughout the summer.


Farm to Coast Mobile Kitchen - Known for its steamed buns and banh mis, this truck spawned a café in Biddeford after its owner needed prep space for the truck. Now the truck and a cart dubbed Steam Machine can be found at breweries and special events throughout the summer. The Steam Machine, serving steamed buns, can be found at Austin Street's Fox Street location every Sunday.

Grillin' Brazilian - This Brazilian themed Airstream trailer managed to serve food through the winter by posting up at Definitive Brewing regularly. Now it's traveling to other breweries (Industrial Way and East Bayside) and has a regular spot on Thursdays at Austin Street's Fox Street location with a new food cart.

Kuno - Serving Peranakan cuisine, a mix of Chinese and Malaysian, owner Nick Lee runs the former Thainy Boda truck. Lee is a former cook at Thainy Boda and bought the truck from Boda's owners when they decided to sell. Launching in February (brave), Kuno has been serving at breweries (Goodfire, Bunker) and on the Western Prom near Maine Med.

Mainely Burgers - This truck has "graduated" (heh, get it, because it was started by college students) into two brick and mortar restaurants in Boston and Cambridge. But the food truck carries on at its regular spot at Scarborough Beach State Park as well as special events throughout the summer. Look for its sister truck Mainely Treats too.

Mami - This truck grew into a successful brick and mortar restaurant on Fore Street, so the truck is out less these days. But it's still available for catering and special events, so you may still catch it. It will be at the May 5th Gastro-Go-Go at Rising Tide (see bottom of post for more information on special food truck events).


Momma Baldacci's - The CN Shawarma/Baharat truck has been resurrected, this time as a mobile version of a longtime Bangor Italian eatery that closed in 2006. The son of the original restaurateurs launched the food truck in late 2018. You'll find Momma Baldacci's serving pastas, strombolis, subs, and cannolis at Definitive Brewing every Wednesday this summer.

Muthah Truckah - Find grilled sandwiches from the Muthah Truckahs at various breweries in East Bayside and on Industrial Way. The truck also posts up at businesses during the weekday for lunch, so check social media for the latest schedule.

Noble Barbecue - Noble Barbecue is known for its over-the-top barbecue meats and sandwiches (particularly their "Scrappy Fries"). With a successful brick and mortar on Forest Ave., the "Mobile Noble" can be found at... you guessed it, breweries and special events! I've run into the truck at Lone Pine Gorham's already this season.

Nom Bai Street Kitchen - Serving Vietnamese and Cambodian street food, this truck has been at Thompson's Point concerts and Congdon's After Dark in past seasons. Scant details are available for this year's kickoff, but they are scheduled to be at Rising Tide Brewing a few times this summer. 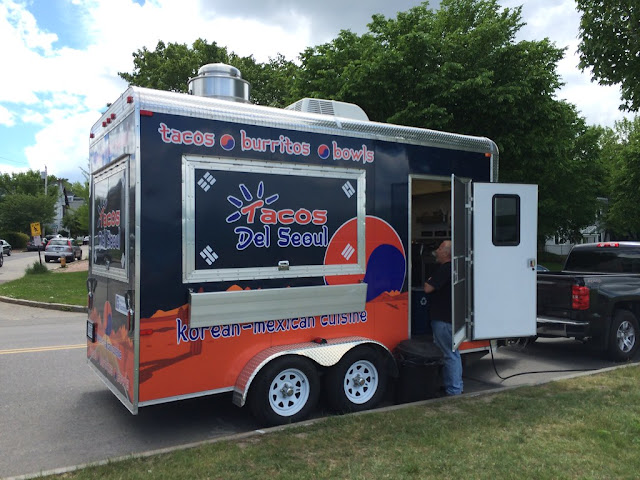 Tacos del Seoul - This taco trailer serves a fusion of Korean and Mexican food with tacos, burritos, and bowls. Its season will kick off May 5th at the Gastro-Go-Go Cinco de Mayo party at Rising Tide. Find them at breweries (Allagash, Rising Tide, Lone Pine), Thompson's Point, and special events throughout the summer.

The SaltBox Cafe - This food truck is actually a small shingled shed on a trailer that serves breakfast and lunch on the Eastern Prom. Find them beginning May 4th at 8:30am on the Prom, and occasionally at Rising Tide and the Industrial Way breweries.

Totally Awesome Vegan Food Truck - Serving up "gourmet vegan junk food from his synthwave themed mobile kitchen" (which is just a hilarious description), Chef Tony and his rad truck can be found on Spring Street and in the parking lot of Tony's Donuts on outer Congress St.

Other mobile food eateries you may encounter at Portland breweries:


To sample several food trucks at once, consider these events:

Street Eats & Beats
This annual food truck festival will have over 25 mobile eateries from Portland and beyond at Thompson's Point on June 1st. Tickets are $12 and drinks from Tito's Vodka and beer from Gritty's will be available. There will be live music and outdoor games. Must be 21+.

Gastro-Go-Go
This gathering of food trucks happens regularly throughout the summer. The first event kicks off on Cinco de Mayo from 12-5pm at Rising Tide Brewing with at least 7 food trucks and carts, live music, games, and of course, beer from the brewery.

Congdon's After Dark
Congdon's is a breakfast and lunch spot in Wells (with delicious donuts), and last year its owners had the genius idea to host these "after dark" nights with food trucks and beer. Billing itself as "New England's only food truck park," Congdon's After Dark has over 10 trucks nightly on summer weekends (Thurs-Sun). Check the schedule—there's a great variety of trucks and even brings the return of Hoss & Mary's, a longtime OOB fave.

Maine Brewers Guild Festival
This beer festival on July 27th at Fort Preble in South Portland will have multiple food trucks in attendance.