Back to basics with four original New England dining cars 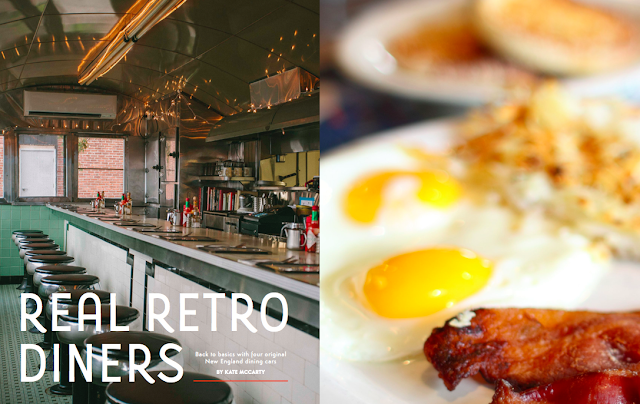 The diner has become the quintessential American restaurant, where simple, affordable food is served up with a warm welcome. Diners became popular in the 1920s when diner car manufacturers sprung up with efficiencies modeled after Henry Ford’s assembly line. The glamorous train culture that captivated Americans in the early-20th century informed the cars’ elegant design. Diners were shipped by rail or trucked to their location, providing a quick entry into the restaurant business for entrepreneurs looking to capitalize on the country’s growing fascination with travel and dining.

Today, diners occupy a beloved spot in the American culinary landscape. You never need to worry about mispronouncing the name of a dish or which fork to use while settled deep in a worn vinyl booth or perched on a stool at the counter. And the menu is guaranteed to include hamburgers, fries, chocolate milkshakes, and all-day breakfast—the ultimate comfort foods. In today’s often overwrought dining culture, it’s good to get back to basics, and on those, these New England diners deliver.

A classic menu with regional surprises

Far from the Gilded Age mansions and super yachts of the Newport, Rhode Island waterfront sits Bishop’s 4th Street Diner. For more than 50 years, the diner has been serving breakfast and lunch to a legion of loyal customers, along with plenty of tourists. Both come seeking simple diner classics with some regional cuisine sprinkled in.

The 49-seat diner sits on a bustling roundabout, at the intersection of a commercial thoroughfare and the entrance to the city’s naval base. Like the train cars that inspired its design, the chrome-plated dining car is long and narrow, with a rounded or “barrel” roof and large windows lining the front. The O'Mahony Diner Company built the diner in 1952 as one of the 2,000 dining cars it made. Today, only 20 of these O’Mahony dining cars remain.

Inside, booths with turquoise-upholstered benches line one wall. Red vinyl–topped chrome stools flank the counter, which runs the length of the kitchen. The black and white tile pattern on the side of the counter and the chrome backsplash are classic Art Deco elements.

The 4th Street Diner first operated as the Princeton Diner in Swansea, Massachusetts, for a decade. New owners moved the diner to Newport in 1968 and renamed it after a nearby street. Nancy Bishop and her then-husband, Steve, bought the diner about 20 years ago, added their name to the moniker, and operated it together until the couple divorced. Nancy continued on her own until last November, when she sold the diner back to Steve, who owns it with his second wife, Vicki.

Even better than Grandma's kitchen

It seems like anyone who has lived in Portsmouth, New Hampshire has a story to tell about Gilley’s, a diminutive diner with just eight seats, dating back to 1940. The understated menu features hot dogs, hamburgers, sandwiches, and fries. With multiple awards and appearances on the Food Network, however, Gilley’s belies its reputation as a gut-busting greasy spoon.

Owner and chef Steve Kennedy’s culinary background is in private catering under the tutelage of famed area chef James Haller of the now-shuttered Portsmouth restaurant Blue Strawbery. That explains why the burgers are made from prime chuck, triple ground and hand-shaped daily. French fries, made from Maine potatoes, are cut to order, and even the humble grilled cheese sandwich benefits from thick slices of Texas toast.

To enter, slide the door open—don’t pull or everyone will know you’re a newbie. Place your order at the counter by the kitchen. Another counter, with eight fixed stools, runs along three sides of the car. The original oak paneling, porcelain trim, and rounded ceiling reinforce the retro vibe.

Built by the Worcester Lunch Car Company, the diner was first pulled around the city by horses, then a tractor, and finally a truck, providing cheap and fast meals to the downtown lunch crowd. It came to a permanent rest at its Fleet Street location in 1974. Kennedy took over in 1994 and added a wing to connect the diner and its storage trailer. The original red-roofed car is now dwarfed by the addition, but the small, caboose-like structure is still visible, complete with the wheels that made the mobile lunch venture possible.

A popular late-night spot, Gilley’s attracts its fair share of boozy revelers looking to fill their stomachs with fried food before bedtime. But owner Kennedy says he works hard to make his restaurant a welcoming place for everyone. He likens the diner to Grandma’s kitchen, where you can’t swear or put your feet up on the furniture. Kennedy prides himself on serving the local community, everyone from “derelicts to debutants,” as he puts it. And his cooking is reminiscent of Grandma’s too, with dishes made from scratch and many of the ingredients sourced locally.

The perfect version of a classic

Be prepared to wait. Fifteen stools run the length of a worn counter, and they’re always full. Named Bon Appetit’s Best New Restaurant in 2014 and attracting national attention ever since, Palace Diner is a dining destination. The brown butter banana bread is reason enough to drive from Portland 18 miles south to Biddeford, a small working-class city still transitioning from manufacturing to modern economy.

When Palace Diner first opened in 1927, Biddeford’s economy revolved around the Pepperell textile mill. The diner turned out quick meals to shift workers 24 hours a day. But the textile industry began its decline in the 1960s, and in 2009 the mill closed for good. Ten years later, the mill’s towering brick buildings are filling up again, this time with restaurants, art studios, and startups, thanks to some forward-thinking developers and bullish city officials.

The diner sits in a large municipal parking lot, painted a splashy red with “Ladies Invited” stenciled on the front. The Pollard Company in Lowell, Massachusetts, built the dining car in 1927, and it’s one of only two Pollard cars remaining. Inside, under a barrel roof, a long Formica counter runs the length of the car, with the stools the only seating. The cooking no longer happens on the grill line behind the counter, but in a kitchen addition. Orders are passed into the car through a narrow window.

Every menu item at Palace Diner is the perfect version of that dish. The potatoes are deep-fried to a golden brown, with craggy, smashed edges and a healthy sprinkling of coarse salt. French toast is made from thick slices of challah bread, custardy in the middle with a crunchy exterior of sugar that has caramelized on the griddle. The cheeseburger’s soft bun and thin patty are reminiscent of the best aspects of fast food. Then there’s the legendary tuna melt, with its inch-thick slab of iceberg lettuce.

The chef-owners Chad Conley and Greg Mitchell have serious culinary chops, having worked at some of the best restaurants in Portland, Maine, and New York City. They took over Palace Diner in 2014, becoming only the sixth set of owners in the diner’s 92-year history. Conley says he now finds it more gratifying to serve up diner fare in an everyday setting: “It’s great to be able to take a high-quality experience that is otherwise only accessible for $100 on a Friday night and make it available for under $15.”

Of the 30 diners on the National Register of Historic Places, over half are in Massachusetts, including the Salem Diner, a rare Sterling Streamliner model. J.B. Judkins Company of Merrimac, Massachusetts, made just 16 Streamliner dining cars before ceasing production following Pearl Harbor and soon after going out of business. The Salem Diner, built in 1941, is one of two still operating.

With a barrel roof, bullet-shaped nose, and metal paneling, the diner looks like a 1940s train engine resting at the station. The car’s design creates a rounded end on the inside too, with tables set into an elegantly arching banquette. Booths and stools provide seating for nearly 50. Cooking still takes place behind the counter on a narrow line of griddles.

Salem State University’s campus encircled the diner over the decades. In 2013, the university bought the diner, renovated the interior, and added a late-evening shift to breakfast and lunch service.