On a recent Saturday, my friend and I decided to go out to Industrial Way in Portland to check out the rearrangement of the breweries out there. We started at Foundation Brewing, which has expanded into some space left vacant when Bissell Brothers relocated to Thompson's Point. 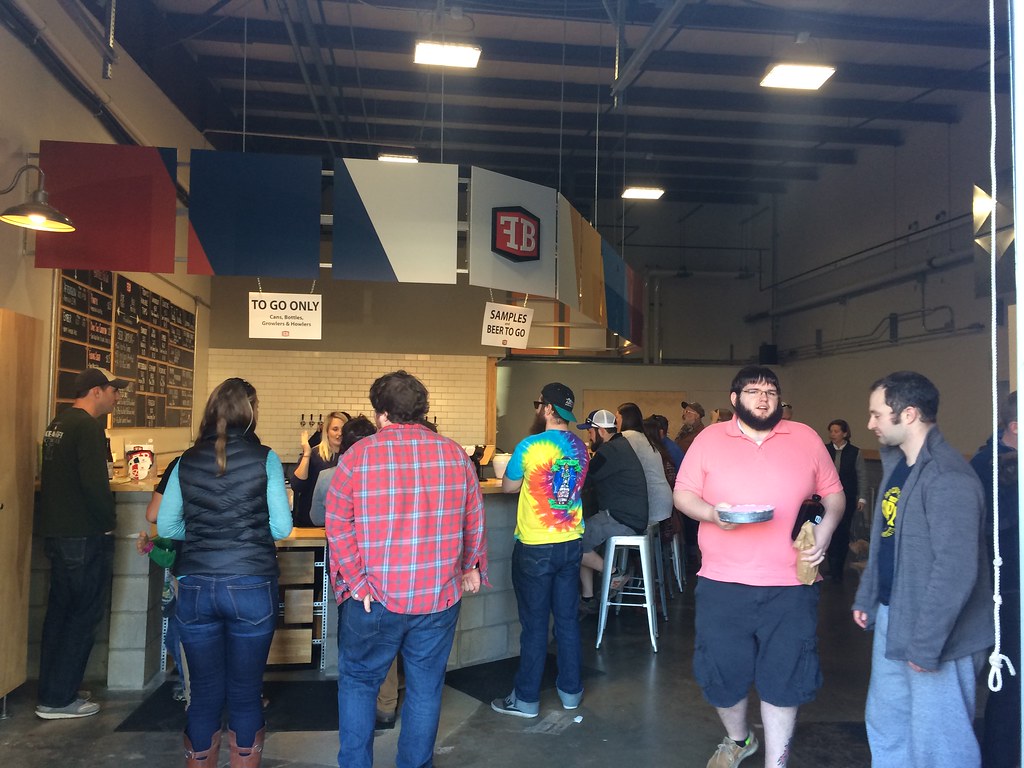 Foundation not only expanded their space, but reoriented their tasting room bar, allowing for more seating and a better flow within the brewery. Entering through the large garage door (open on the day we visited—in late November!) leads you right to the counter where you can order pours of draft beer, buy cans and fill growlers.

The rest of the bay is full of seating, but we took our samples out to a barrel to enjoy and sample some food from Mami food truck. 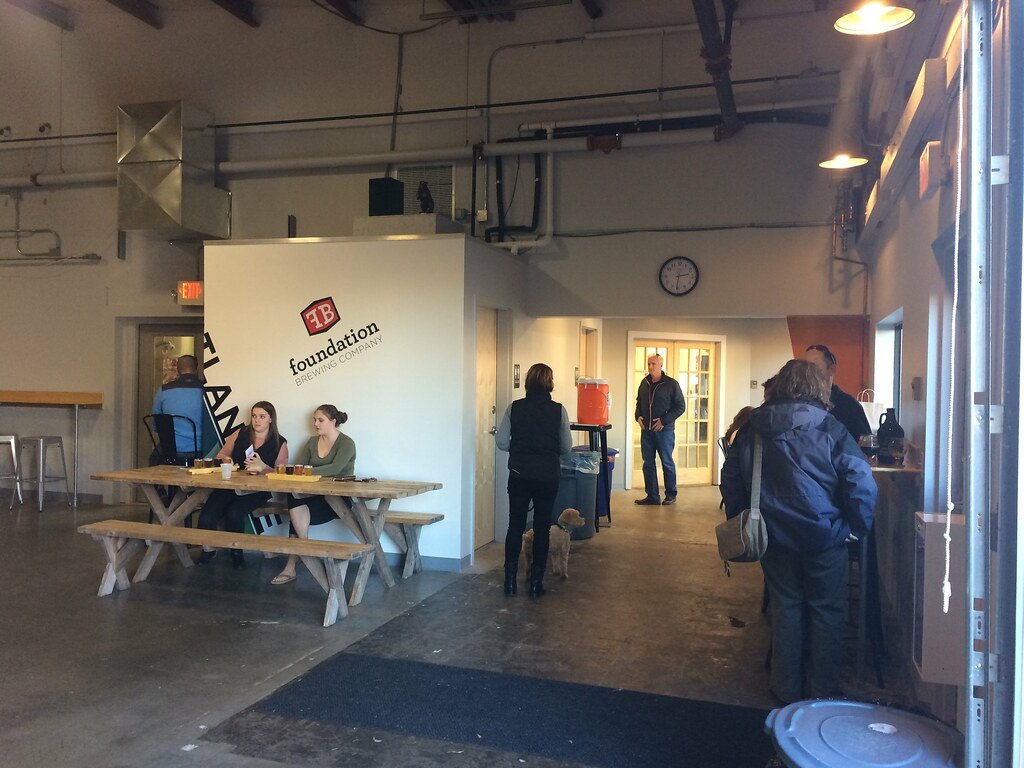 With the six or so draft beers available, we could pick four to make a flight of 4 oz. samples. I chose three brews I hadn't tried before and Epiphany IPA. The Zuurzing sour farmhouse was a standout for me, and I found I might even like Venture IPA more than Epiphany. 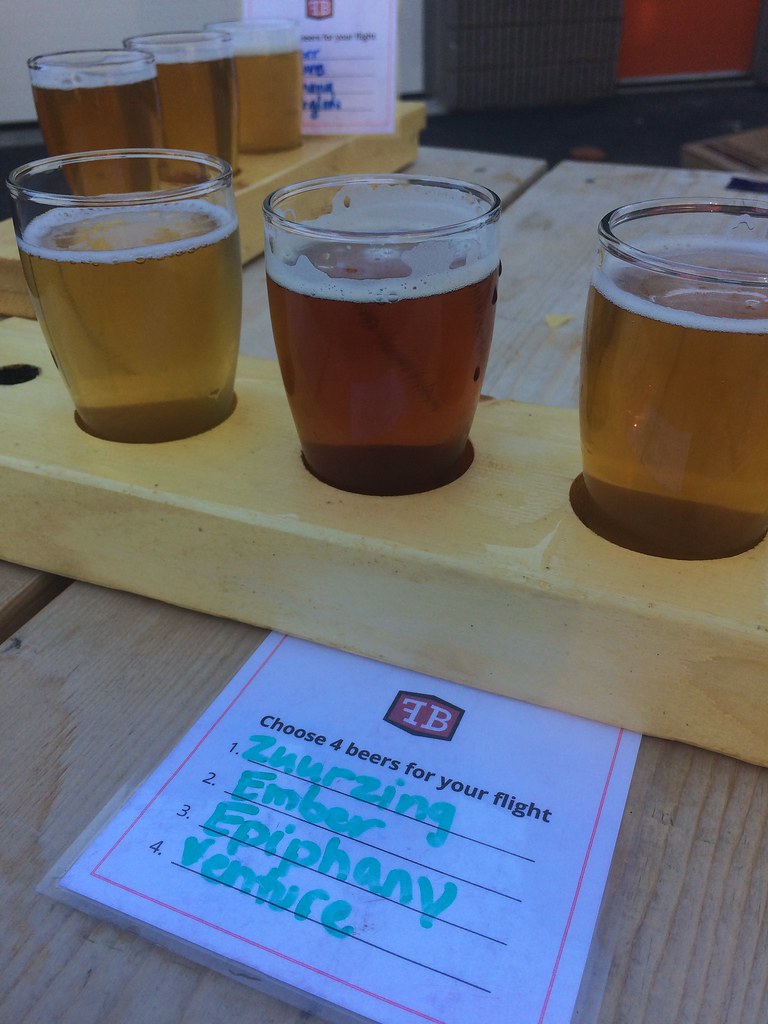 After we enjoyed our beers at Foundation, we headed next door to New England Distilling's new tasting room. It's opened right next to Foundation in an effort to capitalize on the crowds that visit the breweries of Industrial Way. Not as many people make it over to visit the distillery on Evergreen Drive. 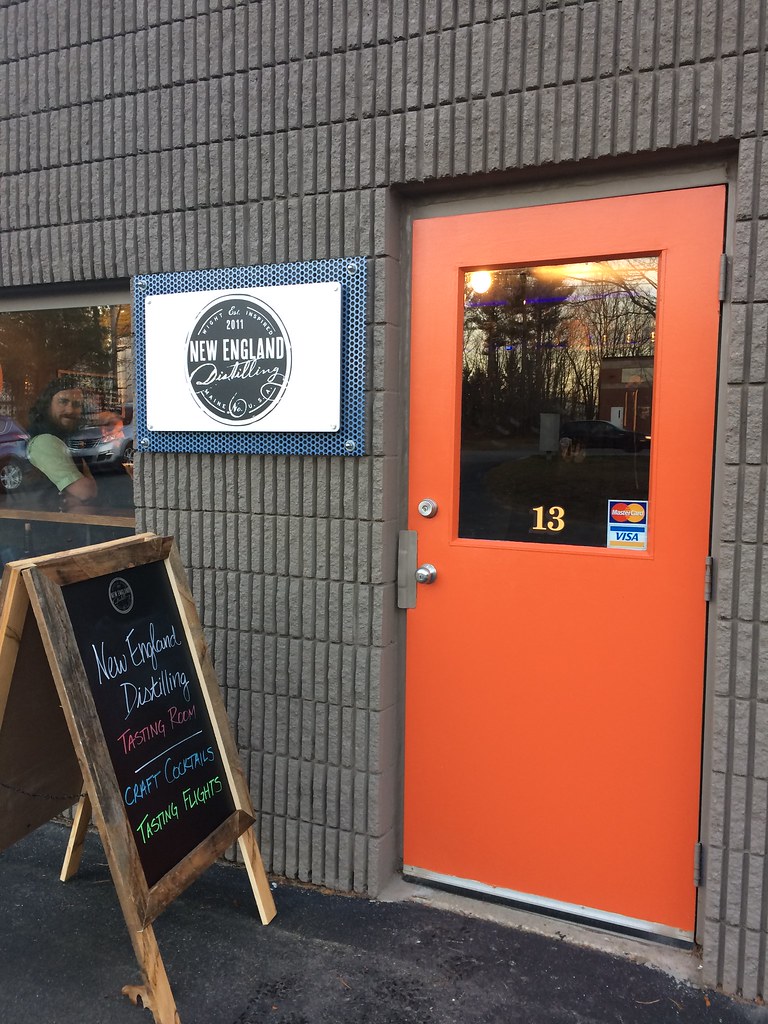 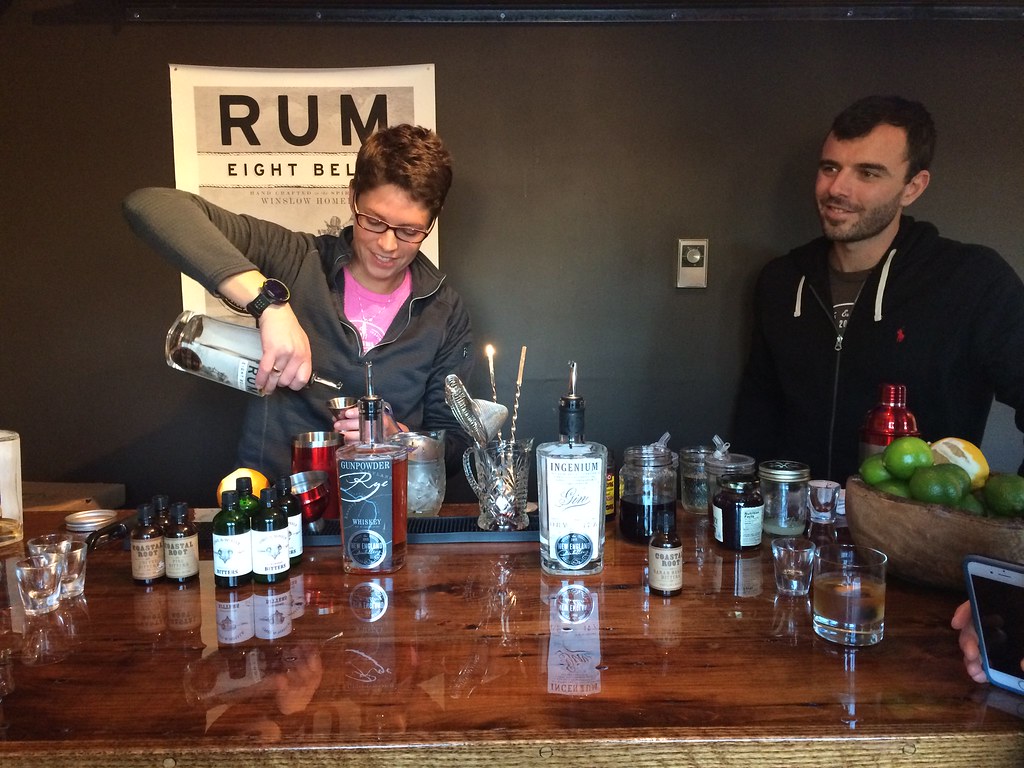 I ordered the rum daiquiri, a delicious tart and spicy cocktail, and when we asked the bartender to tell us about the allspice dram, she went so far as to write down the recipe for her homemade version. The juices were fresh-squeezed, the bitters were all local, and the cordials and syrups were housemade—which I was so impressed to find in this tiny bar in an industrial park!

That New England Distilling's commitment to quality extends from their spirit production to their sample cocktails is no surprise though. 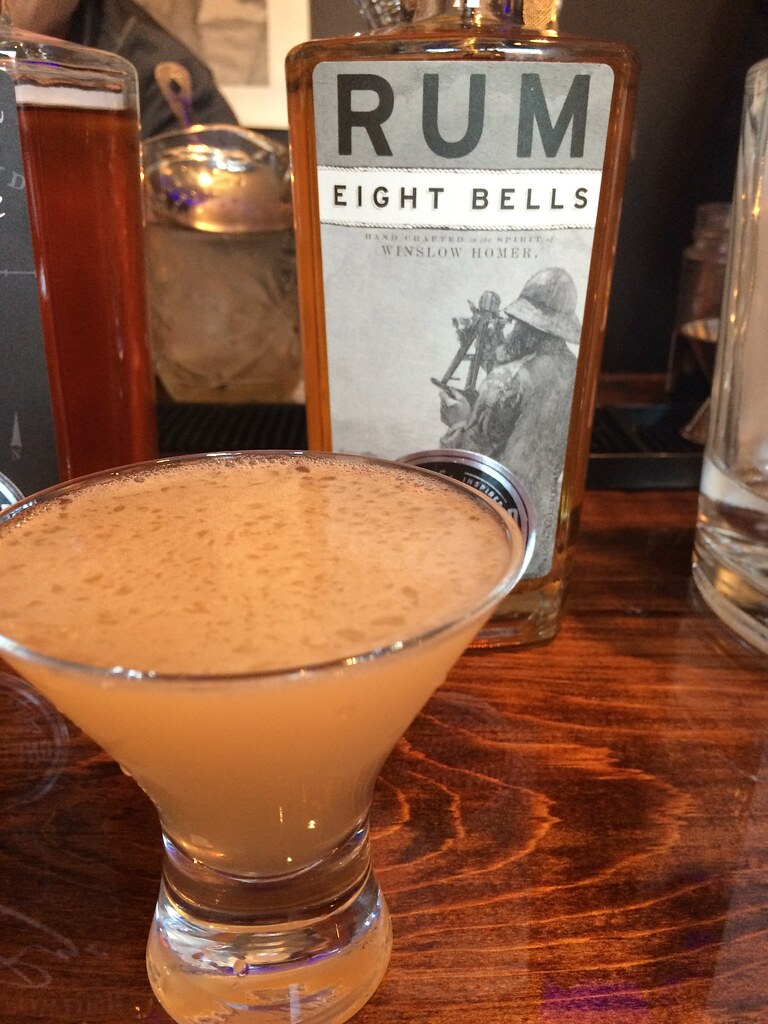 Continuing the theme of new breweries/bars, I suggested we hit the highway and head over to Bunker Brewing Co.'s new Libbytown location. The brewery has moved from a tiny brick bunker to a huge, warehouse of a production space, allowing them to make a lot more beer, which was reflected on the tap list's eight or so selections that day. 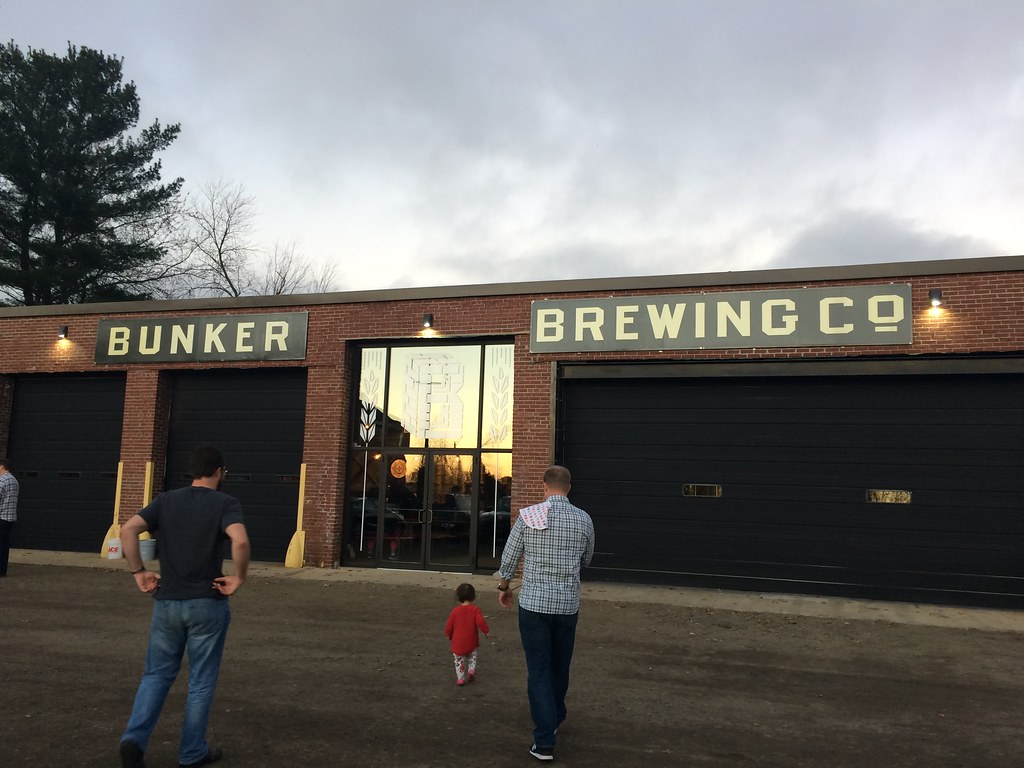 The new space has the Maine brewery tasting room vibe down on lock—exposed industrial features, check. Repurposed materials for the bar, tables, and walls—check. Even unique hardware on the bathroom stall doors! 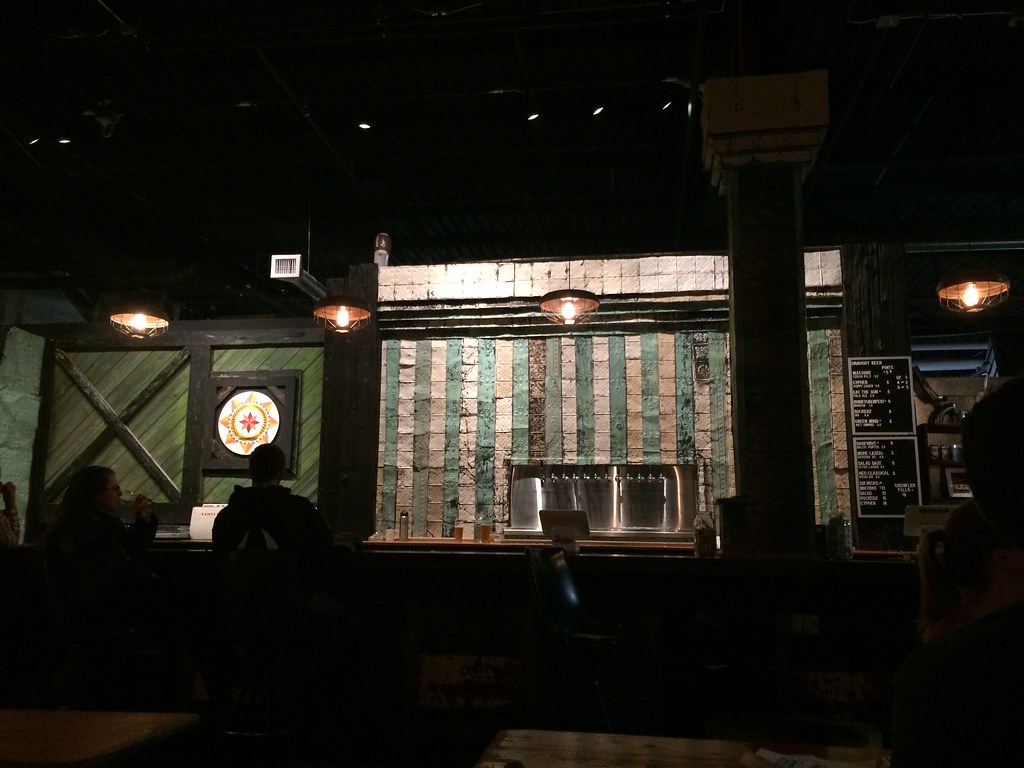 One of the brewery walls is covered in a mural designed by Tessa Greene O'Brien and painted by her friends—yours truly filled in some of the yellow and blue squiggles on the right. The mural is the design of the Salad Daze can, Bunker's American Pale Lager (which is Tessa's design). 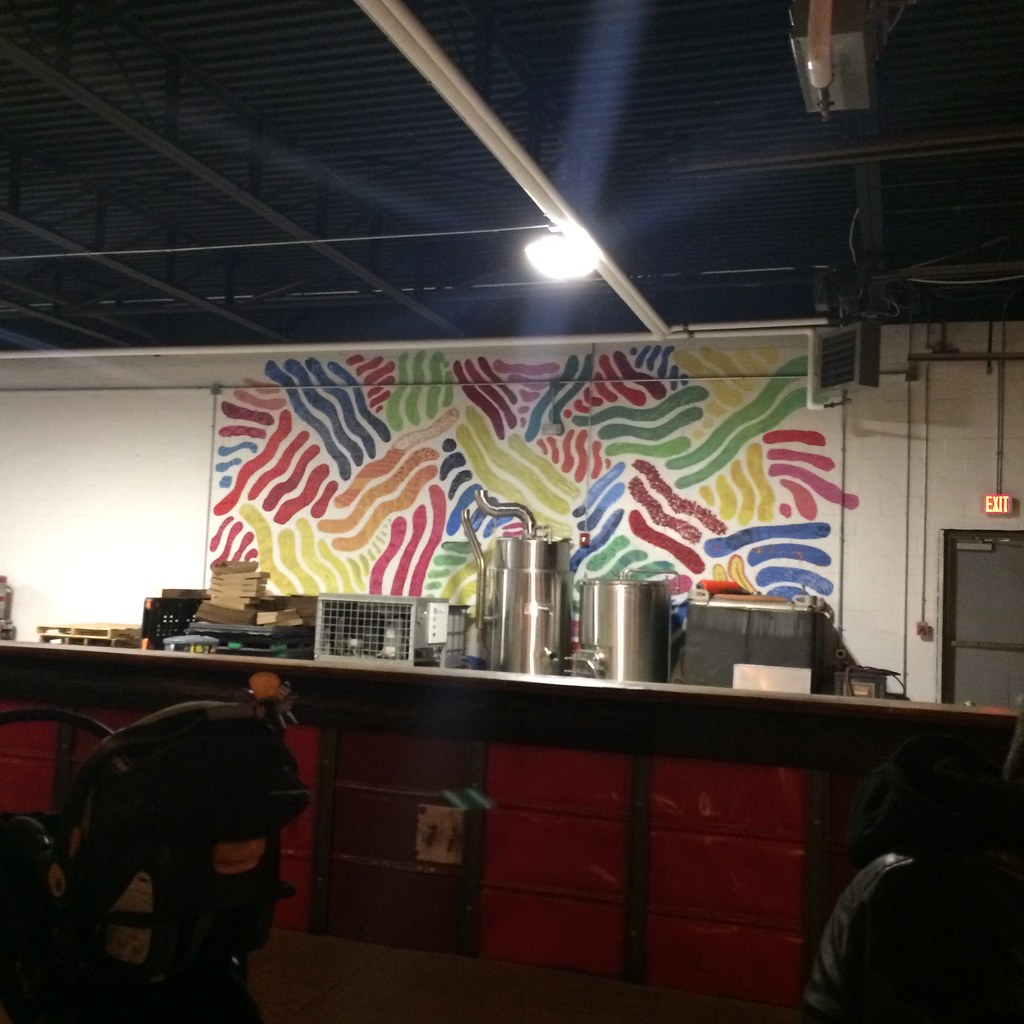 The newly expanded Bunker is a great place, as are most Maine brewing tasting rooms, for families and couples to hang out for an afternoon. The space is a little hard to find, located off Western Congress St. through a dirt parking lot on the backside of a warehouse. Good luck!

If you think you're an old hand at the businesses of Industrial Way, it's time to revisit, as expansions and new businesses have changed the landscape. We also visited Austin Street Brewing and coming soon is Battery Steele Brewing.