Although I rarely make it to other dining spots outside of Portland (not for lack of wanting!), I've become increasingly familiar with the small but high-quality food scene in Kittery, thanks to some friends in that area who give me the inside scoop. I've visited the Black Birch and Anju Noodle Bar, and enjoyed each immensely, so when I heard the owners of Anju were opening a cocktail bar next to their restaurant, I made the trip south from Portland to check it out.

I met Deb and Lauren there for happy hour, and invited Original Roomie A. along too, figuring she'd enjoy the experience as much as I would. We rolled into Kittery on a midweek night, but found little parking and a line out the door of the Black Birch. Looks like the locals don't mess around.

We strolled down the foreside, not entirely sure where we were headed, but I knew that it was next door to Anju. We missed the bar on our first pass, and so we stopped into Anju to ask, where the host led us through the back door of the restaurant into a hallway, opened an unmarked door, and directed us into the back of the Wallingford Dram. Our entrance lent the diminutive bar a speakeasy vibe, but the actual front door is around the corner from Anju, should you chose to go that route. 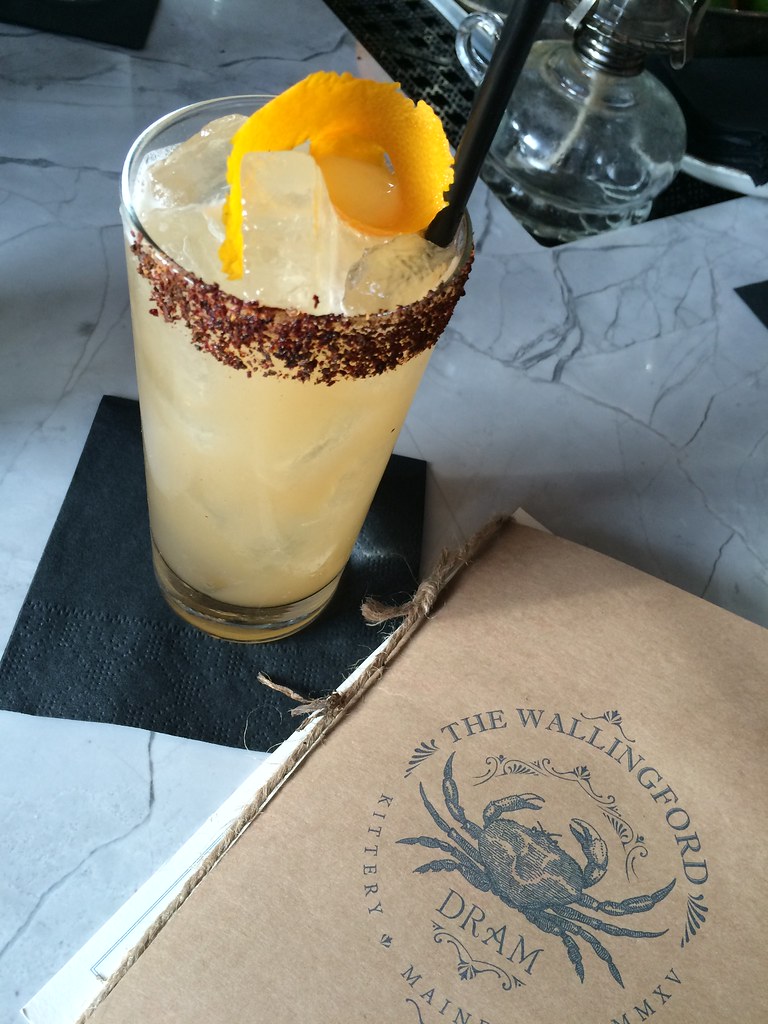 We sat at the bar, taking up 4 of the maybe 20 seats in the house. The bar's wood paneling, dark green walls and low lighting gave the place a cozy British pub feeling, and the loads of fresh fruit and herbs, and jars of housemade syrups, bitters, and tinctures let you know the places takes its cocktails seriously.

The cocktail menu is at least 6 pages long, so I took my time in ordering - having great difficulty narrowing it down, but deciding to go with the Golden Hour: reposado tequila, fino sherry, house apricot liqueur, chipotle cinnamon agave nectar, lime juice, served over ice with a spicy chili rim.

I was also tempted by the Yard Gate Punch: blend of rums, allspice dram, grenadine, lime, bitters, nutmeg, and the Dovetail, a riff on a paloma with mezcal, tequila, grapefruit liqueur, grapefruit juice, salt, lime, and egg white (I'm a sucker for an egg white drink). 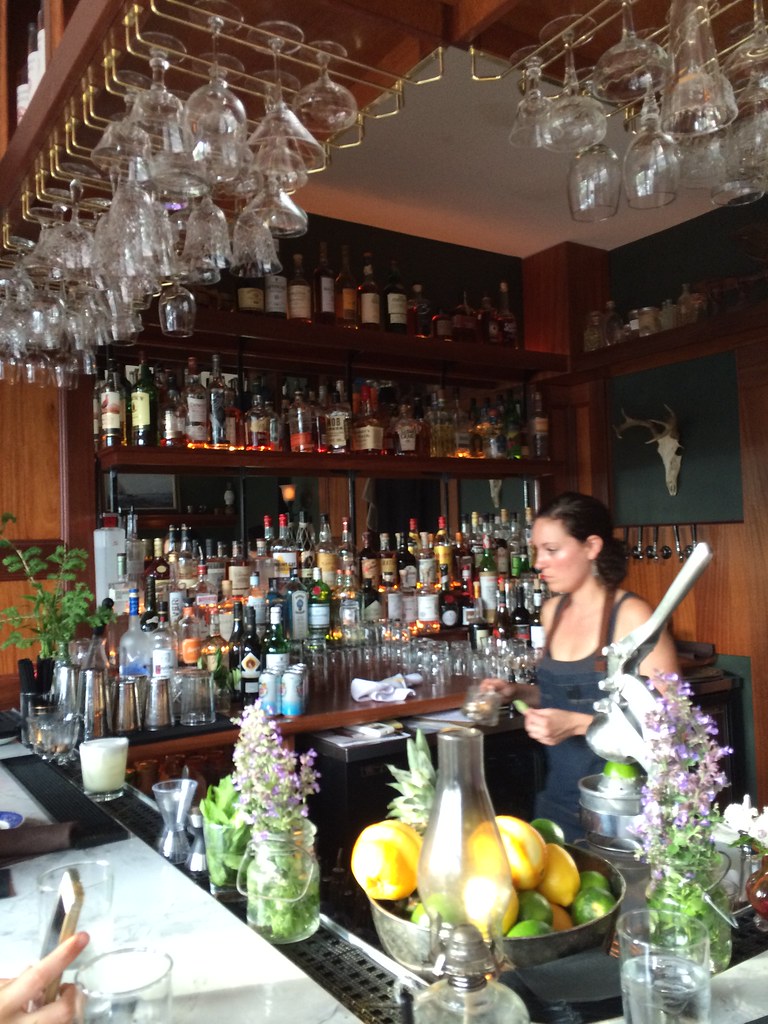 A. chose the East By Gimlet, with gin, house lime cordial, lime, lemongrass, curry leaf, and fenugreek. As you might imagine, these unusual cocktail spices made for a very refreshing summer cooler.

We caught up with my friends, snacked on some spiced nuts and some welsh rarebit, then decided we could share a Mai Tai and still be okay to drive. This version was delightfully tart (I might be becoming disillusioned with my RumDood recipe, as I think it borders on too sweet), and was garnished with some vibrant pickled ginger. 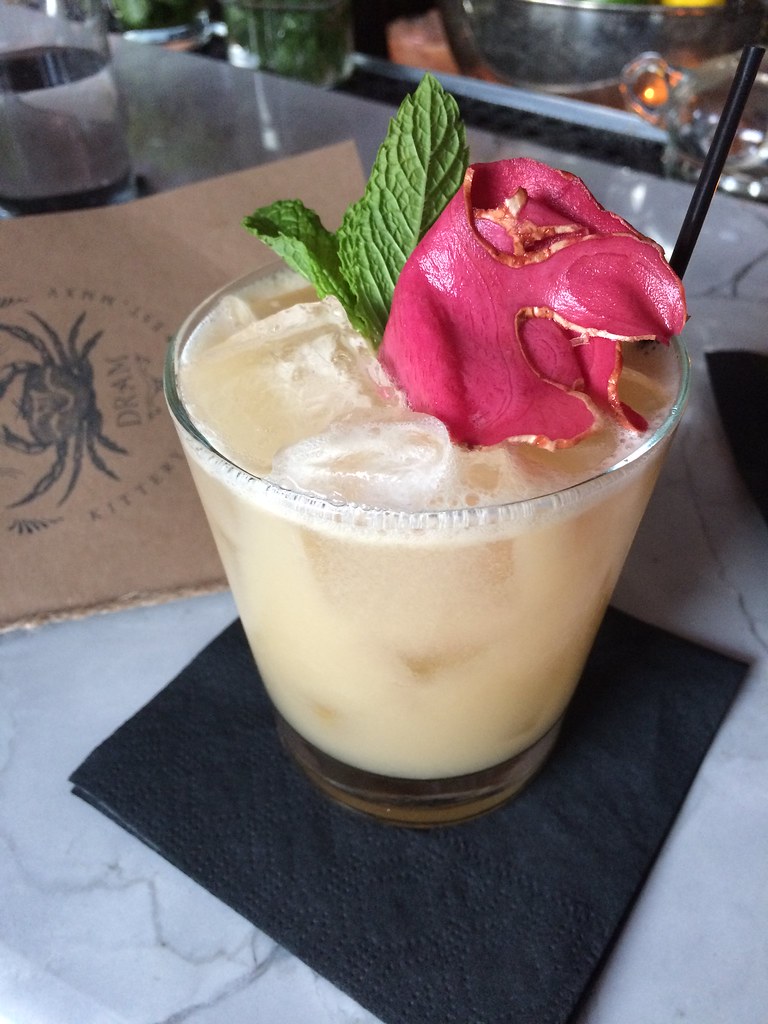 I'm looking forward to returning to the Wallingford to work my way through their expansive cocktail list, and Portlanders should add it to their list of things worth the trip out of town for.