Way back in January, I shared my preliminary planning steps (i.e. soil testing) for my container garden and raised bed garden at my house in Portland. After building up my big (16' x 4') raised bed, I purchased several 15-gallon containers for tomatoes. The soil in my yard is heavily contaminated with lead, so I filled the containers with a loam/compost mix for the plants. I planted several varieties of tomatoes in the containers, and kale, cabbages, onions, lettuce, arugula, spinach, celery, a hot pepper, 2 cucumber plants (slicing and pickling), nasturtiums, and herbs (dill, chives, oregano, basil, and parsley).

Well, very quickly, I realized that 4 kale plants is 3 (some would say 4) too many. They took off in that fresh soil, quadrupling in size very quickly. My problem with kale in the summer is that most recipes require braising, stewing, or adding to hearty dishes like hot soups and stews. Who wants to eat any of that when it's so warm (oh so perfectly warm) out?

So someone suggested this kale salad from Deb of smitten kitchen, who writes: “the world would be a better place if we could all stop pretending that kale tastes good.” Ah, my people. But in using the lacinato (aka dinosaur) kale, slicing it very thinly, and letting it marinate in the lemon juice dressing, the raw kale becomes very tender and silky. (Forget massaging kale, I did that approximately once and immediately deemed it too high maintenance. Plus, it made my hands hurt.)

Kale chips are a great option of course - they taste so good and unlike say potato chips, you feel very virtuous when you're done eating them. "I just ate a whole kale plant!" Sure, one that's sprinkled with parmesan cheese, oil and salt, but hey, it's got to be better than fried potatoes.

Kale chips work best with curly kale, but it's certainly possible with all varieties. The flatter leaves just sort of collapse onto the baking sheet and burn more easily. First, preheat your oven to 400*F. Wash your kale well (especially if it's homegrown), remove the ribs/stems, and tear into bite size pieces.

Place in a large bowl and drizzle with a small amount of olive oil. Here, break your no-massaging-kale rule and toss kale until it's glistening with oil. Then sprinkle with your favorite flavorings - you can go Italian and use parmesan cheese and crushed red pepper flakes or Asian with soy sauce and sesame seeds. Spread on a baking sheet, trying to avoid overlapping the pieces, and bake for 8 minutes, flipping (as best you can), halfway through. Keep an eye on them, the burnt ones are inedible like burnt popcorn.

I also froze 2 kale plants - just put them out of their misery (actually, they were quite happy) by pulling up the whole plant. I prepared it by washing well, removing the ribs/stems, and chopping it. Then I blanched batches in a large pot of boiling water for 2 minutes, then transferred to an ice bath for another 2 minutes. After a trip through the salad spinner, I bagged it in freezer quart bags. Now I'll have homegrown kale to enjoy when it's once again hearty soup and stew weather.

In the kale plants spot, I plan to plant carrots from seed for the fall and some pole beans (I have no idea if it's too late for them or not - but I think half the fun of gardening is just winging it!). 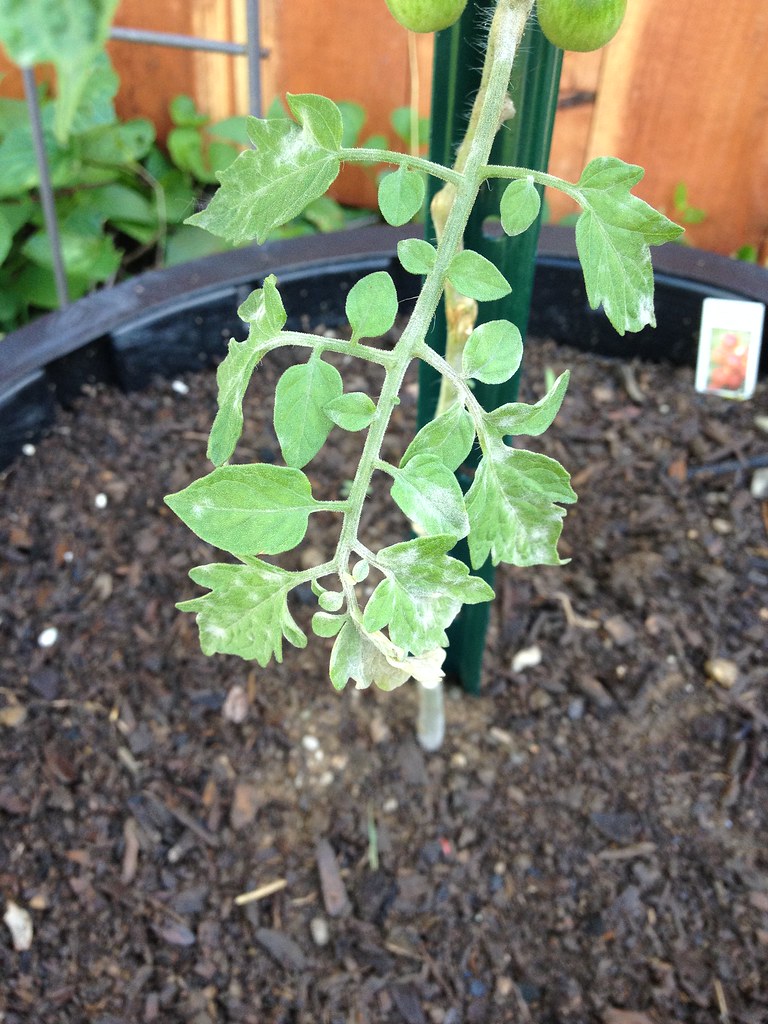 Unfortunately, the tomatoes aren't a success story like my spring/early summer garden full of greens and herbs. The tomatoes haven't grown as much as I expected - maybe only doubling in size from their original 8" seedlings. They get plenty of sun and I water them enough, so the lack of growth is definitely due to the yellowing, then blackening, of their leaves and stems...blight. A word no tomato grower wants to hear!

Several of the tomatoes contracted late blight, which moves far faster and is more harmful to the plants than early blight. Early blight causes a slow yellowing/browning of the tomatoes lower leaves, usually once the tomato plant is well established and bushy. The leaves may fall off as they brown, but it doesn't usually affect the output of fruits. 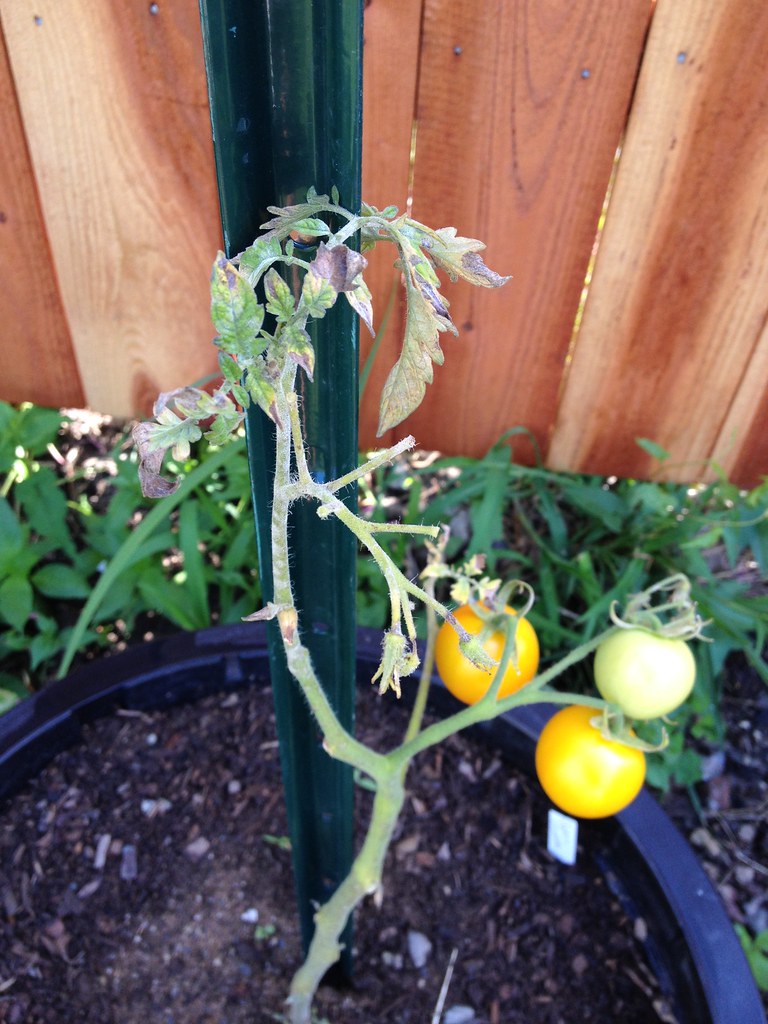 Late blight, however, can level your tomatoes in a matter of days. Mine seem to be hanging in there (this one above excepted - I harvested those 3 tomatoes and ripped out the plant). I purchased a liquid fish fertilizer/sulfur treatment from Allen, Sterling & Lothrop called SeaRose. It's from local Saltwater Farms and it feeds your plants, as well as treats any fungal issues, like blight.

Because blight is fungal (i.e. spreads with spores on the wind or by splashing from the soil onto your plants from rain or hose water), it spreads easily. If you have blight on your property, consider removing the plants to save others, disinfect your tools between infected and non-infected plants, and do not attempt to compost blighted plant material. Rotate your tomatoes/potatoes into a new spot for next year.

Wish me luck with my SeaRose treatment - I am nothing if not stubborn! Hopefully my tomatoes are too. But I'll definitely need to turn to the local farmers for my tomatoes for preserving.