A recent LivingSocial deal caught my eye - every now and then there's a deal for a good restaurant or a service you've actually been meaning to sign up for. Salt + Sea, a Portland-based Community Supported Fishery, offered a month of their fish shares for half-price.

I interviewed Salt + Sea founder Justine Simon for my book back in October. You'll have to read all of Justine's story in your copy of Portland Food (ahem), but the short version is that Justine and her husband Marty moved to Maine so he could help with his family's fishing business. After tasting the fresh fish that Marty's work yielded, Justine felt she could create a business sharing fresh (never frozen), local, sustainable fish with the Greater Portland area.

So Salt + Sea was born. Justine buys whole fish right off the boats and then holds the fish in a brine-ice solution, allowing her to cut day of delivery, which is pretty rare in the industry. Aside from the freshness, the fish she buys are local (caught in the Gulf of Maine) and of sustainable populations. My four weeks of fish species were redfish, hake, cod, and daubs.

(And in case you're wondering about the use of the word 'sustainable' as it applies to cod, the newsletter that accompanied the cod share assured us that the area these fish were caught in (Western George's Bank) supports a healthy population.)

The single share of fish ($96) lasts 8 weeks and is about a pound of fish per week. I somehow ended up buying a double share (about 2 pounds per week), and it's too much for my two-person household. We end up eating fish 4 nights in a row. 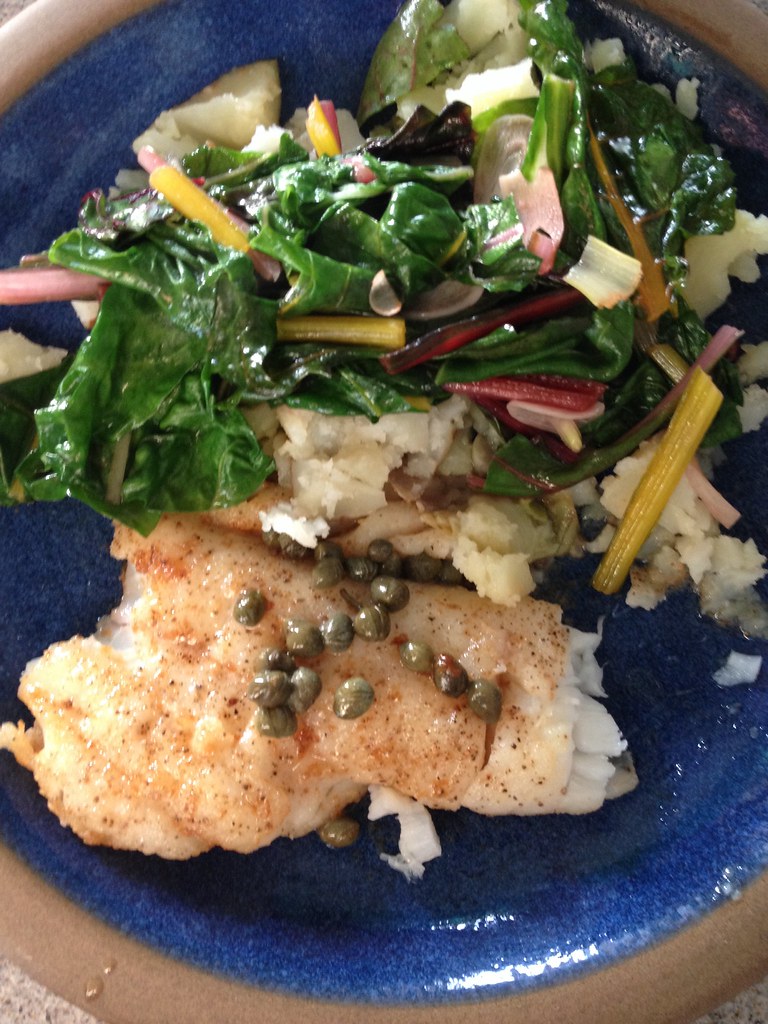 At first, I got by on the baked, topped with breadcrumbs and lemon preparation, but needed to advance past that pretty quickly. I usually make fish tacos for one night, and above, you can see my pan-fried hake with capers, lemon, butter, and wine pan sauce.

This fish cake recipe from Jamie Oliver was included in one week's newsletter, and I loved it. I felt like a real New Englander, using my Fryeburg potatoes and Gulf of Maine fish to make fish cakes. They were delicious, and I ate them with sauteed spinach, pickled beets, and sour cream.

Bring a large pot of salted water to the boil. Peel the potatoes, chop them into even sized chunks; add the potatoes to the boiling water and bring back to the boil. Rub the fish fillet all over with a little olive oil and sprinkle with a pinch of salt and pepper.

When your potatoes are halfway cooked, place the fish into a colander, and place the colander over the pot of boiling potatoes. Turn the heat down and cook for 8-10 minutes, until the fish and potatoes are both cooked.

Remove the fish from the colander and put to one side. Drain the potatoes in the same colander, then return them to the pot and let them steam dry for a minute. Mash the potatoes, spreading the mash round the sides of the pan to help it cool down quickly. When the potatoes are cooled, put it into a bowl and flake the fish into it with 1 tablespoon of flour. Add the egg and chopped green onions with a really good pinch of salt and pepper. Finely grate over the lemon zest, then mash and mix it up really well.

Shape cakes into 1 cup rounds and place onto a flour-dusted sheet of parchment paper. Chill for one hour in the refrigerator. Then freeze or fry to serve.

To fry: heat a heavy-bottomed skillet (cast iron) over medium-high heat. Add two tablespoons neutral oil and heat until shimmering. Add fish cakes and do not disturb for 5 minutes (no peeking!). Flip and cook for 3-5 more minutes until nicely browned and crisp.