At the beginning of the month, Back Bay Grill quietly announced on its facebook page that the kitchen would be serving their famous burger. It's only available as a special, and you have to call ahead to reserve yours. Maybe the promotion is an attempt to draw in an audience that otherwise wouldn't frequent the Back Bay Grill, and if so, it totally worked.

For the first time, I ventured down to Back Bay Grill with a group of 5 friends, all 30-somethings. We were greeted warmly by the host, who took our coats from us. A nice round table was set for us in the corner of the restaurants, allowing us to talk as a group.

Having reserved six burgers for our group, the only decisions we were left with were what to drink and the temperature of our burgers. I ordered a pinot noir ($12) and we also decided to share two orders of steamed mussels ($12) before our meat-fest. Several servers attended to us, setting warm bread and a ramekin of butter with 'BB' traced into the top. We noticed our server was even wearing 'BB' earrings.

While the group raved about the mussels, I thought they were a little big - bordering on two inches, rather than the smaller local mussels. But the broth they were in was delicious. As we enjoyed our first course, another group of 30-somethings was seated at a large table in the dining room. They were also pilgrimaging for a tableful of burgers. 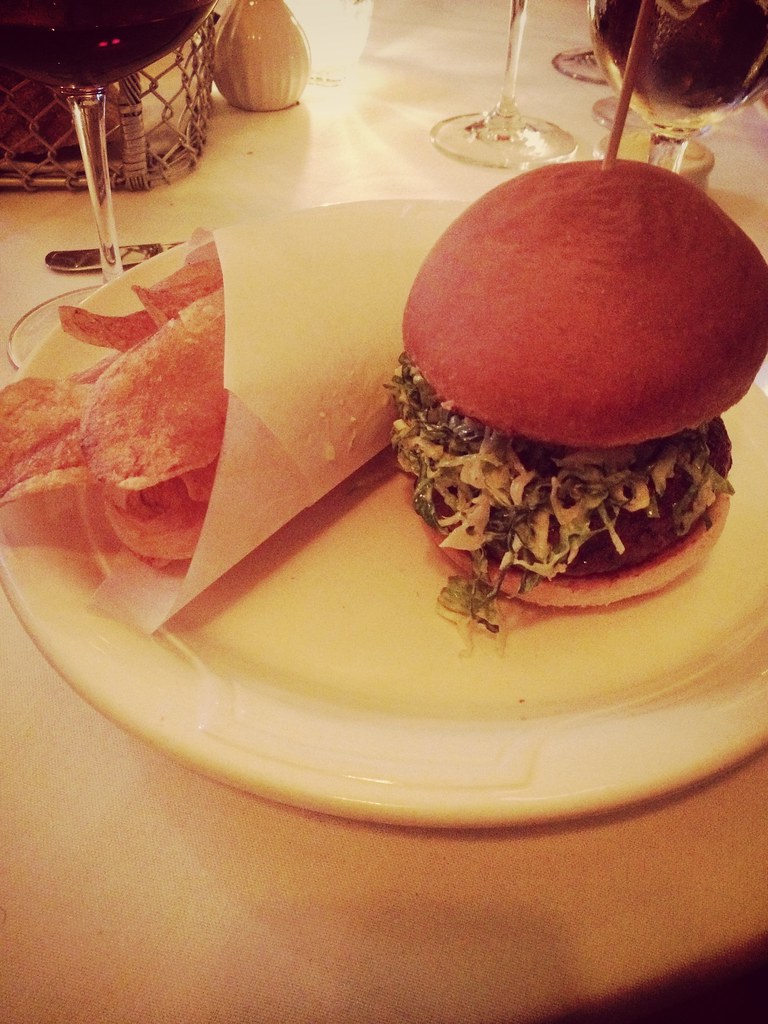 Because the burger was a special menu item, I don't know the specifics about the pedigree of the meat or the bun... just that it was all fantastic. The burger was topped with shredded lettuce and a Stilton blue cheese sauce? dressing? mayonnaise? Something that added a nice salty element in contrast to the richness of the meat. I'll admit my burger was a little overcooked (ordered medium-rare, came more like medium), but nothing worth getting upset about.

After much ecstatic eye-rolling and "mmm"ing, we untucked our napkins from our shirts and pushed back from the table. We declined dessert, but they sent us one anyway—some coffee ice cream and a crunchy tuile cookie. I felt like we received the high-roller treatment, even though we "only" ordered burgers.

As we left the dining room and waited by the host stand for our coats, members of my party found friends at the bar and chatted for a bit, giving me a minute to scope out the crowded bar area. The entire front room of the restaurant is filled with the bar and host stand, creating a cozy environment. I thought I'd be very much at home sitting at the bar and enjoying drinks and appetizers.

I wonder why Back Bay Grill is not on more people's radars? The restaurant has been run by Chef Larry Matthews, who has a serious culinary background, since '97. It's menu and wine list have racked up considerable awards and is considered one of Portland's best restaurants.

You might suggest the price point keeps younger people out of the Back Bay Grill. I agree that it's not necessarily an everyday place, but it is possible to eat there and not blow your budget (by enjoying soup/salad/appetizers mostly - the mains are expensive). I would also argue that I view Hugo's as a restaurant with a younger crowd than BBG. And Hugo's is by no means cheaper than BBG. Maybe Hugo's recent rebranding has made them more popular with a younger crowd?

So what makes a high-end restaurant fill with a mix of young and old diners, while one remains frequented by the fur-and-pearls pre-theater set? (Not that that's actually a thing in Maine, but you know what I mean...)

Regardless of your age, check out Back Bay Grill in Bayside for a drink and an appetizer, or go whole hog and order the filet mignon ($36).