Cooking and the Single Life 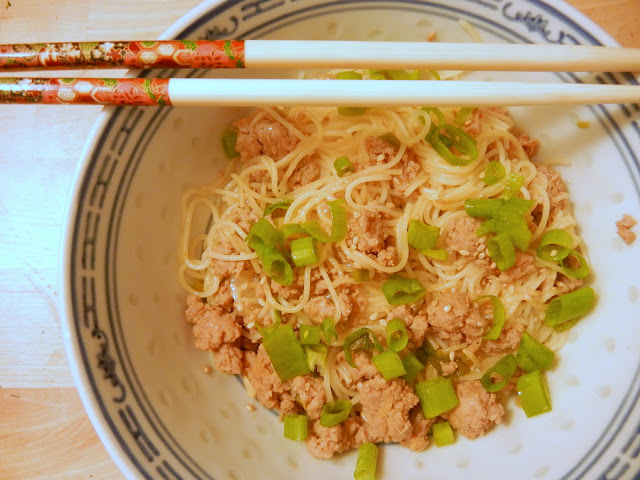 An old friend John used to make (and maybe still does) big batches of food and eat them for every meal. As you can probably guess, John was a bachelor at the time. As a happily coupled young twenty-something, I thought this was so strange.

I was enjoying domestic bliss, staying in a friend's house that had a fully outfitted kitchen (they were real people, when at the time, I was long-term housesitting and/or living on boats). My then-boyfriend and I made elaborate meals in our borrowed house and ate well.

The idea of eating the same thing for several days straight didn't appeal to me. I thought it a) really weird to eat spaghetti for breakfast and b) the more obvious one, that you'd get bored during your pasta-a-thon.

But now, I totally get it.

In addition to being really busy lately, I don't have anyone to cook with anymore. So the other day, that same then-boyfriend suggested I make this "ants in a tree" recipe. I have no idea what that name references (does it look like ants in a tree to you??).

But this thin pasta (or bean thread noodles) is dotted with clumps of ground pork, spiced with garlic and ginger, and more subtly, soy sauce, Sriracha, sesame oil, and topped with tons of chopped green onions. Apparently it's Chinese comfort food, but it makes for a great dinner/breakfast/lunch/lunch/lunch run.

Ants in a Tree
Adapted from Alton Brown's recipe

Combine pork, 1/4 cup soy sauce, garlic, ginger, and Sriracha in a bowl. Mix until completely combined and let rest for 30 minutes. In the last 10 minutes, bring a large pot of salted water to a boil. Add the pasta and cook until al dente (about 5 minutes).

While the pasta is boiling, heat a large cast iron skillet or wok over medium-high heat. Add vegetable oil and saute pork until done (no pink remaining). Add the 2 tablespoons of soy sauce and the drained pasta. Remove from heat and toss until combined.

Serve with additional hot sauce, and garnished with green onions and sesame seeds.