While visiting my family in Maryland, we stopped for lunch at Five Guys Burgers and Fries during our post-Christmas gift card shopping trip. I thought I'd snap pictures of my lunch and share with you my experience at this beloved burger restaurant. Then... when I returned to Maine, I saw the headlines! How timely. 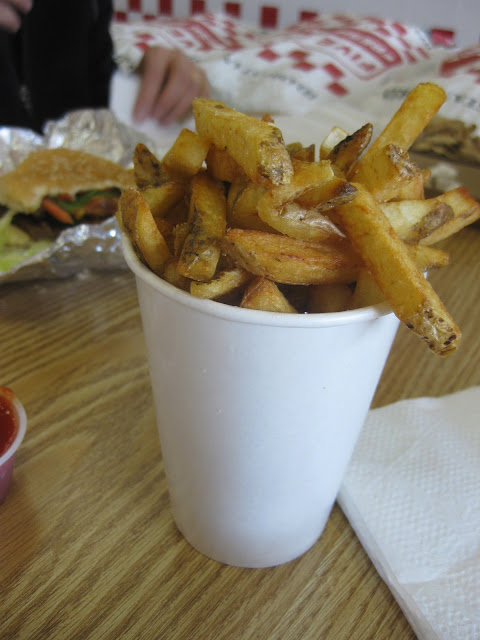 First, the fries. Their fries are great- crunchy, skin-on, salty, not greasy or limp. Always fresh and hot. Rivals Duckfat fries? Discuss. Have a fry-off in 2011. 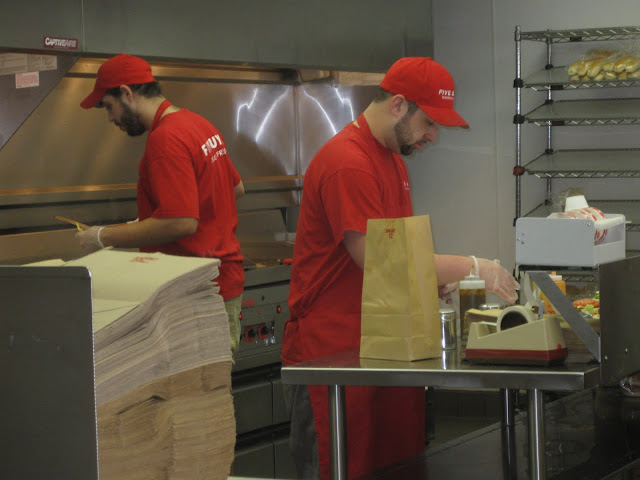 Next, the burger. I ordered a Little Cheeseburger (LCB), which is plenty of food, despite being called little. (A big burger is just two patties instead of one.) And I ordered it with everything, which is ketchup, mustard, lettuce, tomato, grilled onions, grilled mushrooms, and pickles. There are a myriad of other toppings you can order as well. 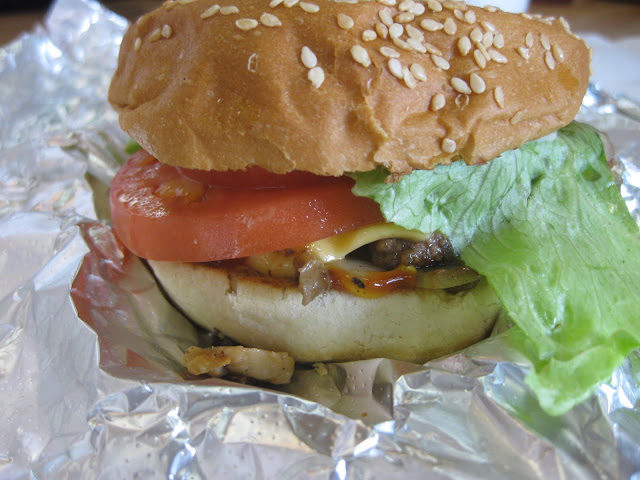 I have a lot of respect for this burger. I realize that's a weird thing to say about food, but it's not pretentious. It doesn't have effing foie gras on it, it doesn't have weird artisan ingredients (ahem, garlic jam at Nosh), but rather is made with fresh, never frozen beef, and simple, straight forward toppings. 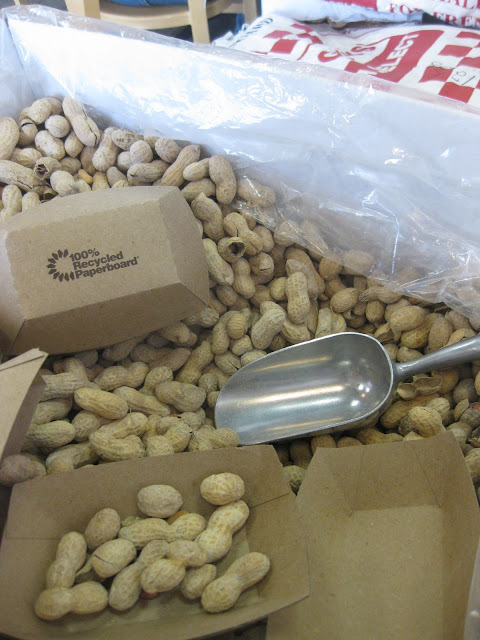 Free peanuts while you wait!

And much has been made about how Five Guys' burgers and fries are bad for you. (And holy cow, a large order of fries has 1,464 calories and 71 grams of fat. But, a large order of fries will also serve like 5 people. The three of us split a regular and had leftover! fries!) So I do not recommend eating 5 Guys every day (M. I'm looking at you). But for a burger that you wait two minutes for, this is a pretty damn good burger.

Oh my. These candies are so addictive, that I don't even have a finished shot of them. They were eaten up before I could artfully arrange them and snap photos of them. But it's appropriate, I guess, since these candies aren't pretty per se, they're just delicious. Addictive even. Like, can't stop eating them until you feel sick (but you're OK with that).

And you can't get any more simple than the process. Or the ingredients for that matter. To start, cover a baking sheet with tin foil and heat the oven to 350 degrees F. Spray the foil with baking spray or rub with vegetable oil. 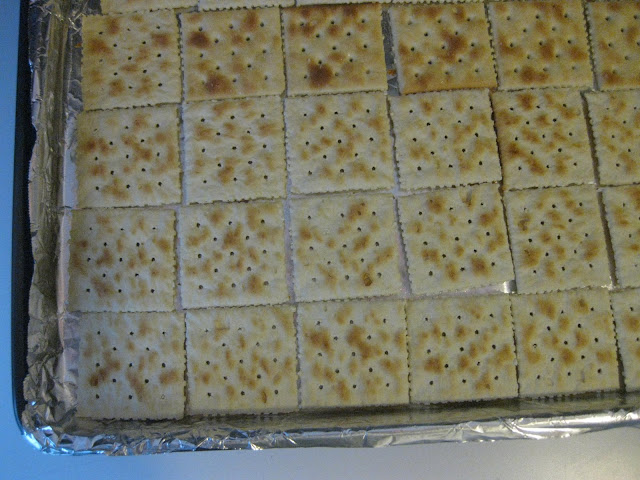 Spread about one and a half sleeves of Saltine crackers over the foil in a single layer. 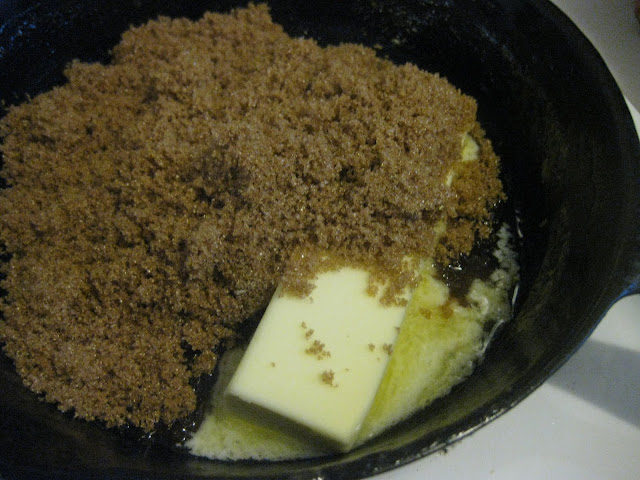 Then, in a small saucepan, heat one stick of butter and one cup of brown sugar, while stirring to combine. Once melted, boil the sugar and butter until it boils rapidly. Let boil for one minute. 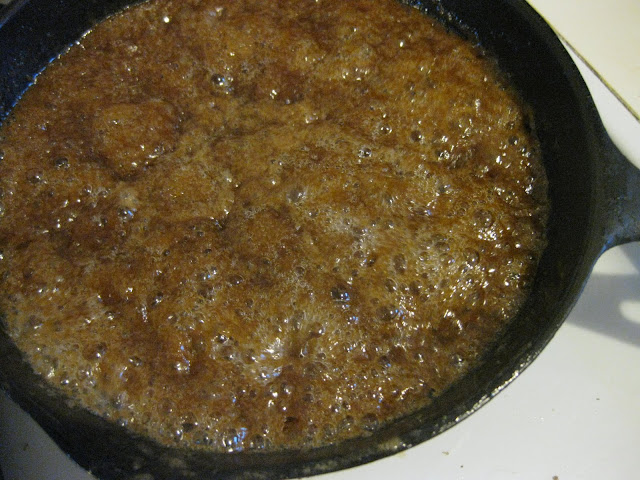 Pour the sugar butter mixture over the crackers, attempting to cover all the crackers, but not worrying about it too much. Heat in the oven for 5 minutes. 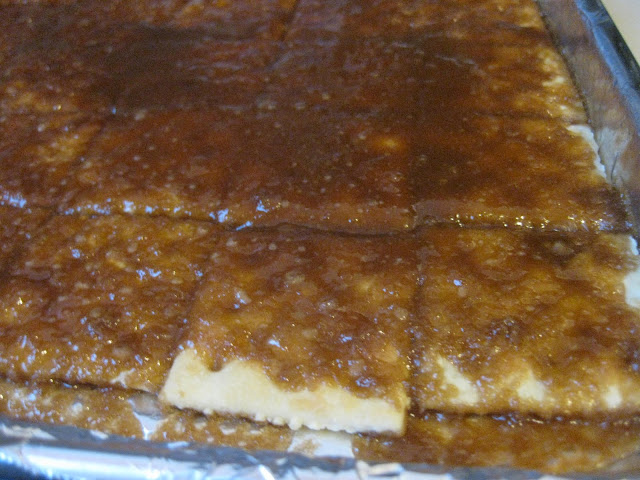 After the toffee has spread out over the crackers and is bubbling, remove the sheet from the oven. Sprinkle 2 cups of chocolate chips and put back in the oven for one minute. 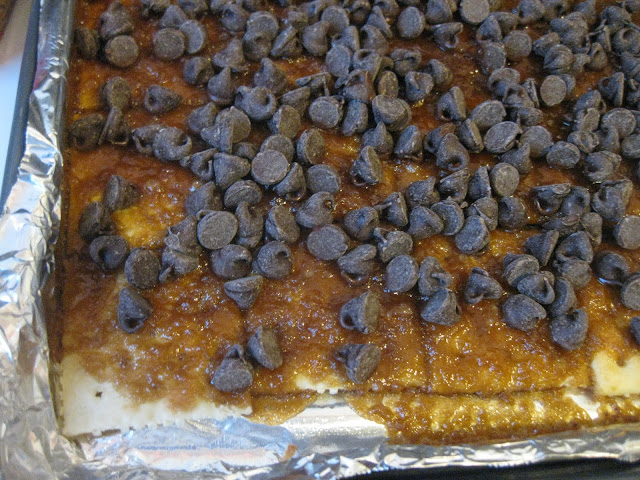 When you pull the sheet back out, it will look the same! But the chips will be spreadable, so spread them out over the crackers. Sprinkle crushed Saltine crackers, chopped nuts, crushed peppermint or chopped dried fruit over the candies and place in the refrigerator. Refrigerate for 30 minutes and then break into pieces. Eat (try to avoid eating them all in one sitting. OK, don't. I won't tell!).

These candies would make great gifts at the holidays, whether when visiting friends and families, as a hostess gift at a party, or for those beloved family members who have everything. Trust me, they will be asking for Saltine toffee bark year after year.
6 comments:

This post, like most good nights out involving alcohol, will be well represented with photos in the beginning and then taper off into some nonsensical smears of dogs running from the room. But nonetheless, I attempt to recreate the 2nd annual Obscure Holiday Cocktail Tasting. Sometimes not so obscure, other times not so holiday. But, away we go. 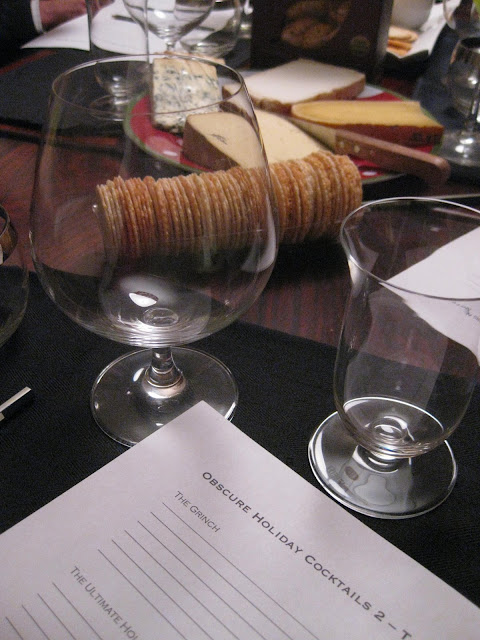 First up, the Grinch. Maybe I would have drank more of this if it wasn't my third drink of the night. I figure, why waste good tolerance on something so terrible? I know that it was made using high quality liquor (Midori, Cointreau, and vodka), but it ended up tasting a bit Rikaloff-y. (Side note: did you know there's a Facebook fan page for Rikaloff vodka? Ew.) 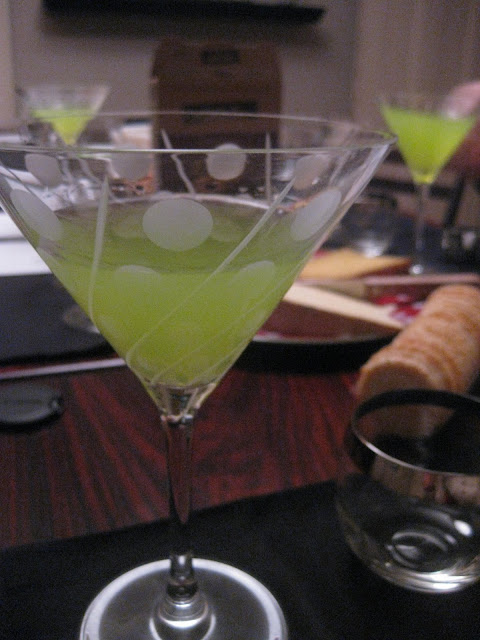 It made ME kind of Grinch-like.

But paired with Lenora, an aged Spanish goat cheese, the burning aftertaste was less pronounced. Or rather, I stopped drinking my drink and just ate some cheese. Others didn't think this one was so bad, but I couldn't get into it. 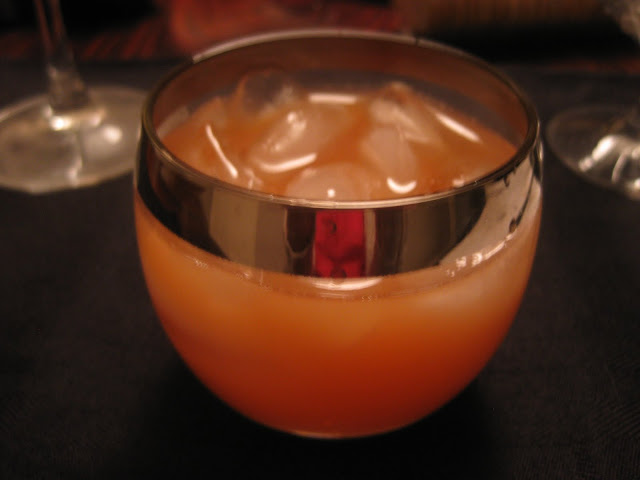 Next up, was my favorite drink, the Ultimate Holiday. The instructions for the drink tell you to throw out all the mixers and just drink the booze, but if you actually make the drink, it's delicious.

Oh, yum. I could drink these all day at the beach. This drink was paired with Dutch Farmstead, which Uke picked because it paired well with Bourbon. To test it, we had to have a mini-bourbon tasting as well (and yes, the cheese went well with them).

Next, A. of Portland Food Map, introduced us to Muslum. We started with Casillero del Diablo Carmenere, a full-bodied red wine. Then we stirred in some local honey (from Tom's Honey & More), sipped, and marveled at the transformation. The honey added another layer of richness and cut the tartness of the wine. The honey also went well with the Uplands cheese paring. Really, it sounds simple, but a tablespoon of honey transformed the wine into something cozy and perfect for the holidays. 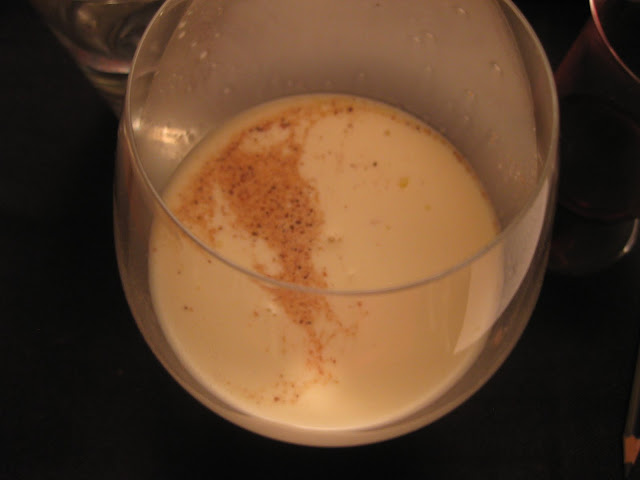 Last was a drink called the Spanish Reindeer, which started with some homemade eggnog. I followed John Meyers' recipe from the Bollard, and found it to be a little too mild. I was expecting the taste of store-bought eggnog, but better, because, well, I made it!

To make a Spanish Reindeer, simply mix in 1 oz Dark Crème de Cacao and 1 oz Frangelico Hazelnut Liqueur to a glass of eggnog. The result was a little sweet, a little nutty; a nice twist on traditional nog.

The cheese pairing, much like the photos, kind of went out the window, by the end of the night. I'm sure I had some, but don't quite remember!! So again, just like last year, we come away with some favorites and some never to be repeated. My recommendation is the Ultimate Holiday at anytime and the Muslum to share with friends and family around the holidays. Cheers!

As I've told you before, I like the bar at Havana South. The service is good, it's full, but not too busy, and the drinks are interesting and well-priced. So M. and I frequently go there for drinks, but when we ventured into the bar snacks, we received tepid, uninspiring food. However, we decided to give a try for brunch last Sunday.

I struggle to find a brunch spot in Portland that I a) like and b) can get into without waiting for an hour. For example: Becky's and Caiola's—long wait that's not worth it. Bintliff's, Hot Suppa!, worth it, but huge wait. Miss Portland Diner, not that great, but no wait. Hm, Local 188- huge wait? I must remember to find out next brunch craving. Anyways... Havana South unfortunately falls into the, 'not that great, no wait,' category.

After a round of drinks (Mimosa for me and a spicy Bloody Mary for M.) and a crunchy savory, cheese and chive scone, I received the Lobster Benedict with Fennel Hollandaise and Huitlacoche. 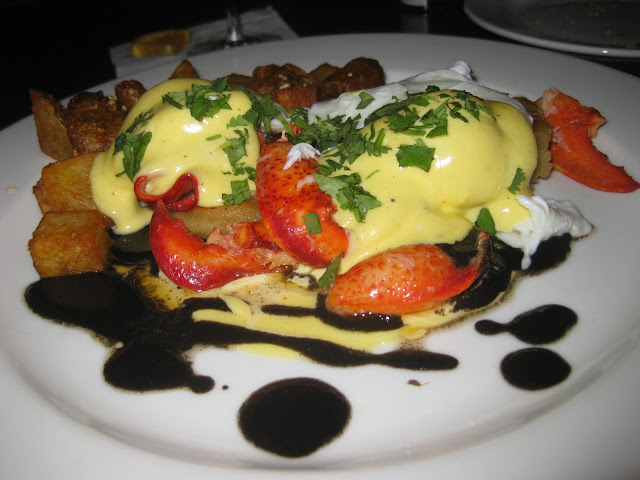 The presentation of the dish was beautiful, but the taste fell a little short. The cornmeal cakes were underdone and added a distracting wet, mushy texture. The flavor of the fennel in the hollandaise, the earthiness of the huitlacoche, and the lobster never came together. The homefries were the best part, as I liked their spice mix—one with a little sweetness.

M. ordered the Roasted Vegetable Tortilla, which is a Spanish dish that is much like a Fritatta. His dish was a little lukewarm, and as you can see, suffered from a serious lack of color. Brown gruel, anyone? 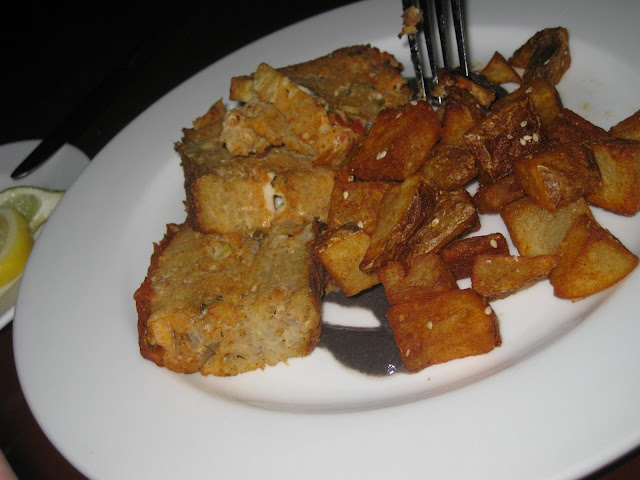 The flavor didn't make up for the temperature and appeal issues; it tasted a bit like a cold leftover rice loaf (no actual rice, just the taste). M. slathered ketchup on it to salvage it. Surprisingly, the bartender said that a group of women (down the bar from us) returned week after week to order that particular dish. So, not to our tastes, but some people like it!

We had a lovely time at Havana, but unfortunately, the food wasn't good enough to make us want to return for a meal any time soon. Again, I guess we'll stick to drinks at the bar.
No comments:

Quick Eats for a Busy Lady


I've never really been all that busy - other than of my own making with things I enjoy (i.e. a job I love or extracurriculars). But when people say they're busy, I get it now, 'cuz I'm busy. And so there hasn't been a lot of home cooked meals 'round these parts.

But I've eaten out a lot since Thanksgiving, most of it places I know are good (Po'Boys & Pickles and Otto) or places that are cheap and pubby (Gritty's, Rosie's, Ruski's). There has also been Trader Joe's frozen fish and Mandarin Orange Chicken (addictive).

So yeah, not a lot worth sharing; I'm sure y'all can relate. I hope everyone is enjoying their countdown to the holidays, with friends, never-ending to-do lists, and lots of cocktails, chocolate, and cookies. Oh, and soft socks. Be well.
1 comment:
Newer Posts Older Posts Home
Subscribe to: Posts (Atom)