Finding the Best Cupcakes in Portland, Maine, Round 1

Shannon of Edible Obsessions came up with the great idea to have a cupcake tasting since new bakeries keep popping up like mushrooms in your yard. So last Saturday night, Dawn of Appetite Portland and I headed to Shannon's house with our respective confectionery procurements (read: cupcakes).

I picked up vanilla from Katie Made Bakery, which we paired against a Madagascar Vanilla from Tulip Cupcakery (sold at Kamasoupra). 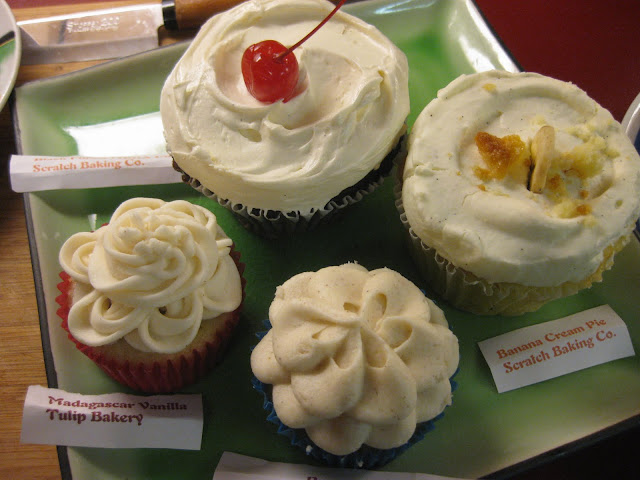 Tulip's Vanilla cupcake is shown above in the lower left. It was the clear winner, with a great vanilla flavor to the cake and moist, creamy icing. Katie Made's was a beautiful cake, but was lacked the great vanilla taste of Tulip's.

Next, we pitted the three fruit (if pumpkin is a fruit) flavors against each other. First, the big monster (see in the above photo on the right) from Scratch Baking Co.: banana cream pie. This cupcake is not only huge, it's filled with banana pudding! Scratch Bakery showed they know their baking with this cupcake, as the filling was not too sweet, the cake very moist, and the frosting light, almost like whipped cream.

Tulip Cupcakery's Pumpkin cupcake came in second, with a big pumpkin flavor in a dense, moist cake. The 158 Picket Street Cafe Apple Spice Brown Sugar with Cream Cheese frosting had a mild flavor and was more like a quick bread than a cupcake. It was not my favorite, but Scratch Bakery's cupcake was a hard act to follow. 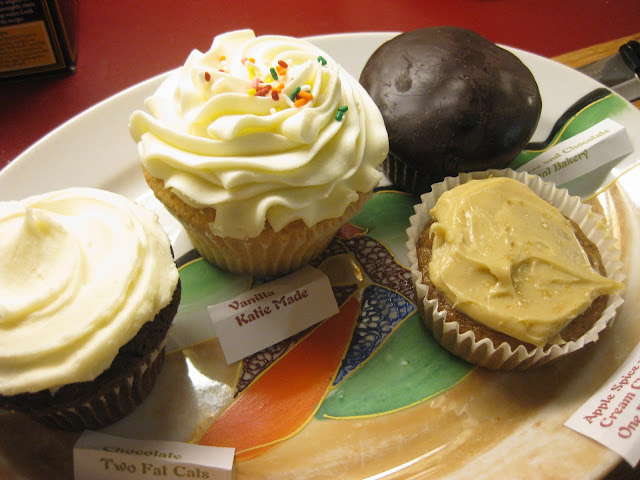 It was about this time in our cupcake sampling that we all got a little giggly - things that were not so funny, suddenly seemed hilarious. As a child, I enjoyed eating Pixie Stix dumped into Jolt cola at sleepovers, but as I've grown up (and experienced stronger intoxicants!), I don't find myself chasing the sugar dragon anymore. But Saturday night was a different story. A dozen cupcakes and a cup of coffee, and I was high as a kite.

I must disclaim that I am not a huge chocolate person, so I didn't go gaga for the Chocolate Guinness cupcake. It was very good (and the sugar sillies had us sniffing our cakes to try to detect the Guinness), but it was a bit much for me. I was glad we were only taking a bite of each. But if you like flourless chocolate cake, pick up the Rosemont cupcake.

Two Fat Cats' was a standard chocolate cupcake with springy cake and good chocolate flavor, but Scratch's was the winner again. The cherry filling was tart, not cloyingly sweet like pie filling, and the chocolate cake was just spot on. 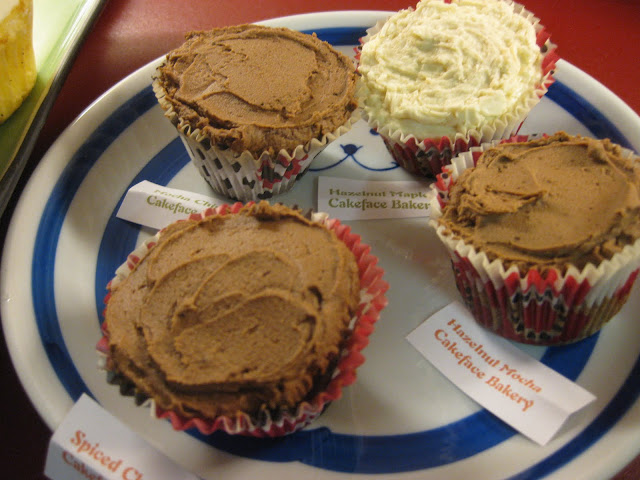 Lastly, we tried the gluten-free, vegan offerings from Cakeface. We sampled Mocha Chip Mocha, Chocolate Spice, Hazelnut Mocha, and Hazelnut Maple. I will add the disclaimer that all of these cupcakes are very good *for gluten-free cupcakes.* They don't have any texture issues and have great flavor. My personal favorite was the Hazelnut Maple since it was so strongly flavored, and I love big flavors. 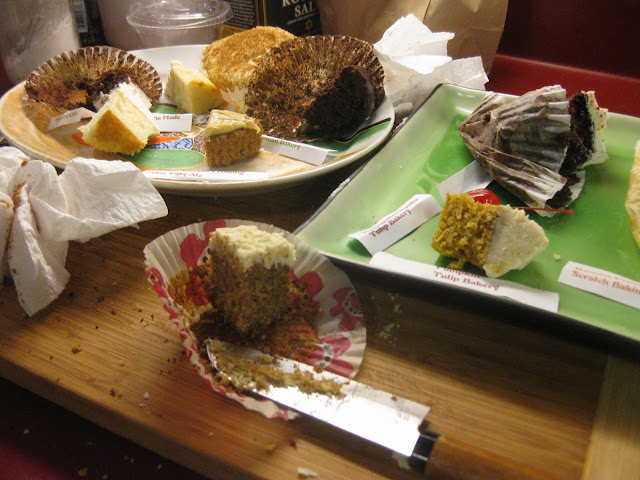 It felt a little weird to throw away cupcakes, but when faced with sampling a dozen, I felt it necessary. As it was, I vibrated out of Uke's apartment thinking I never wanted to see another cupcake again. But the next day, when my blood sugar levels had stabilized, I realized I did. And I won't be able to get them out of my head until I can venture over to South Portland and visit Scratch Bakery for more of their freakishly large cupcakes.