Much has been written about the 'Sicilian Slab' or the pizza that comes out of the back room bakery at Mucucci's Grocery Co. on India St. in Portland. I've heard so much about this mythical slab, that on Thursday I decided enough is enough. I read all the articles and reviews and marched myself down there at 11:30am to try to get my hands on some slab for lunch.

But on the way down, my determined resolved became tinged with anxiety. Would there be a line? (There wasn't.) Would the bakers be mean to me? (They didn't even look at me.) Would I have to wander around awkwardly inspecting 10 cans of tomato paste while I waited for a batch? (No, there were 5 slices waiting on the shelf.) And most importantly, would I get some slab?? (Uh, yes.) 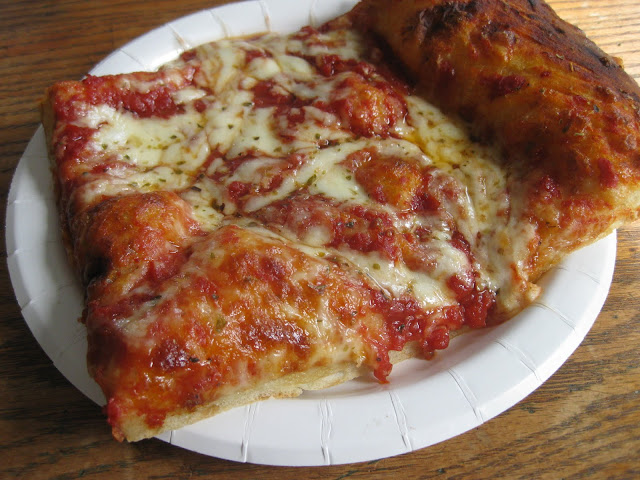 When I came into the back room that is the bakery/cafe area, I saw about 5 slices of slab sitting on the stainless steel shelving. A hand written sign said 'Slab $4.50.' Some early lunchers sat at the small tables cutting up their slabs with a knife and fork. I casually took a slice of slab, and walked up to the register, thinking, 'that's it? I just take one?' And the woman at the register was, as always, very nice to me. It was a little anti-climatic, to say the least.

Except for when I got home and sat down to take that first much-awaited bite of slab. Insert hyperbole here! Angels sang, trumpets played, rainbows squirted across the sky!

Yeah, it's that good. I thought, bready pizza? Ew. But it's like brioche bread. Thick, but crispy out the outside, very tender, not tough at all. Plenty of well-seasoned sauce, flavorful cheese (when often the cheese flavor gets lost on pizza).

So, try the slab at Micucci's, but you probably already know that.