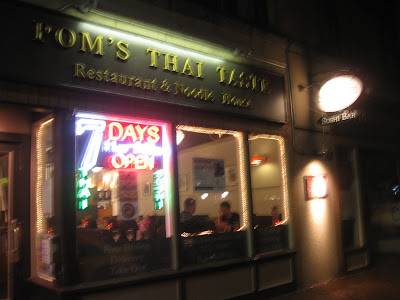 I, roomie A., accompanied Kate to Pom's Thai Taste last week. Kate wanted to tell you that she thoroughly enjoyed the decor. She finds it to be the most tasteful Thai restaurant in town. It was pleasantly modern and we appreciated the complete lack of kitsch (i.e. no glowing lobster) which allowed us to focus entirely on the food. Which was, on balance, pretty good. 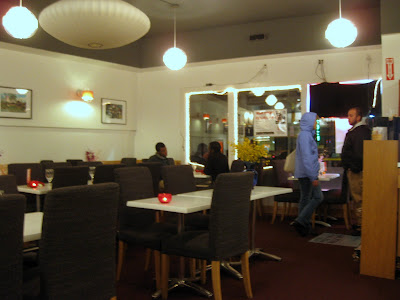 We started with sushi, because on Mondays and Tuesdays, Pom's offers certain sushi for one dollar per piece. We tried salmon, tuna, and escolar. We saved at least $7; a rockin' deal, significantly meaningful for us, the undeserving poor. The quality of the fish was impressive given the price. In addition, we had a veggie roll which even Kate admitted was tasty and visually appealing (and Kate is STRONGLY anti-vegetarian sushi). 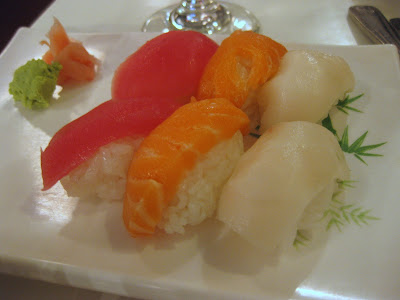 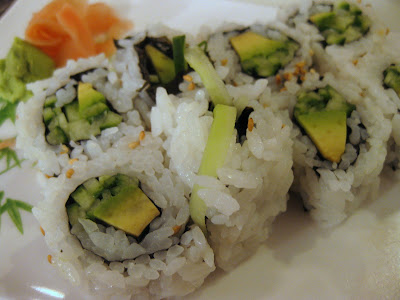 Our fresh shrimp spring rolls were exactly as advertised: fresh, springy, and included shrimp (which was also fresh and springy). The dipping sauce was delicious. I expected it to be overly sweet, but I was so pleasantly surprised! It was a little spicy, nicely balanced with sugar, and topped with crushed peanuts. 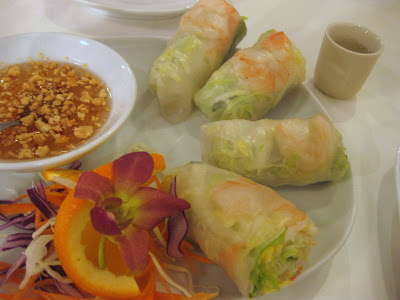 The whole meal went well with the warm sake we drank. Fun fact: Kate shared with me that it is bad luck to pour your own sake . . . which meant, damn I was busy pouring Kate's sake! But I had some too, and it was delicious.

And I wish we could give the same ringing endorsement to our main course. Kate and I shared a crispy pad thai. And in all honesty it just wasn't to our taste. We couldn't quite envision it before we ordered. The noodles were, as you can see, yellow egg noodles. They felt like maybe they were fried and drained. In any case, the consistency was just odd. Kate would tell you, if she weren't sitting across the table eating D'affinois and french bread while I go to the effort of writing her leisure activity on her behalf, that the noodles were much more appetizing the next day after the leftovers had spent some time in the fridge marinating in the sauce. The seasoning on the whole thing was perfect in EVERY way. The same treatment of regular noodles would have been precisely our perfect pad thai, but c'est la vie, that's the risk of being adventurous! 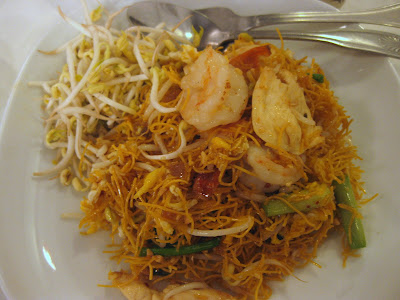 In general, things were lovely. The service was a little lackluster- perhaps due to inexperience. And we were the ONLY table in the place for some of our evening, which might explain why the kitchen was so quick. But, as Anestes mentioned in his blurb, the courses were lighting quick. Our app was out before our sushi was gone, and our entree arrived with half our app on the table. We didn't order dessert until we had admitted defeat to our entree. But dessert was lovely. Fried coconut ice cream (delicious in the way of a donut soaked in ice cream drizzled in hershey's and sprinkles with whipped cream and a cherry on top) was a great way to end the evening.

Kate says, and she'd type it if she weren't eating, that she wishes we'd gone back for more traditional Thai food. I, roomie A., would be amenable to that almost any night! 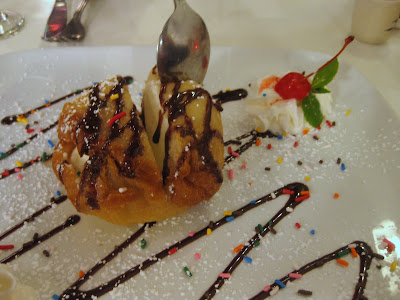