What an ordeal! I feel like I've done battle with this month's Daring Bakers' Challenge. And I'm not sure who even won... 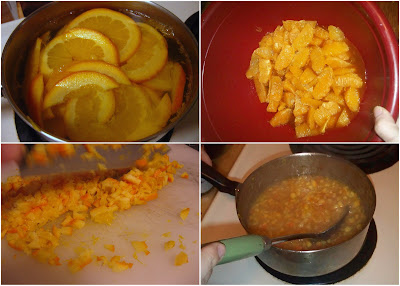 This month's challenge was an Orange Tian, a layered tart made up of pate sablee (fancy tart crust), orange marmalade, whipped cream, and segmented oranges. The whole thing is finished with a caramel orange sauce.

And in the end, well, you'll see... but it kind of tasted like an orange creamsicle. And I hate orange creamsicles. Yes, hate. As far as treats from the ice cream man go, I prefer those sorbet type things with gumballs (they usually take on the shape of Nemo, Mario, SpongeBob, etc.). 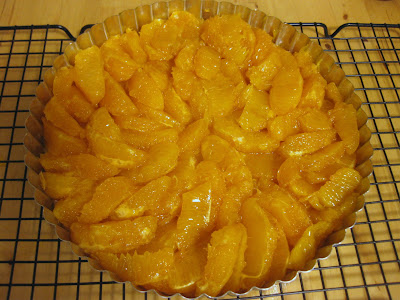 Oh hey, check out those beautifully segmented oranges. We watched a how-to YouTube video and everything. 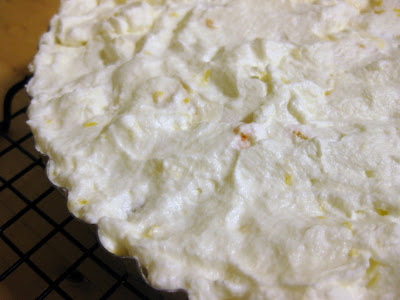 After the orange segments were neatly layered in the pan, we added some whipped cream that had been beefed up with some gelatin for body and some orange marmalade for beautifulness. 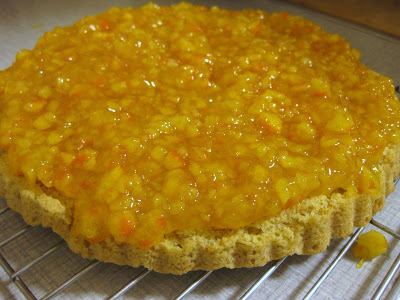 I made the patee sablee while Roomie A. did a great job making the marmalade. After we served the Tian, a few of us decided we don't actually like marmalade, but that was no fault of the cook's.

Really, that marmalade is beautiful. 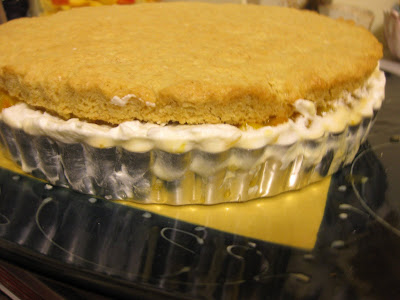 OK, what you don't see between these two photos is that, due to the jury-rigged nature of our tart assembly, we splattered whipped cream all over ourselves and the side of the oven trying to get the (heavy) pate sablee marmalade side down on top of the whipped cream and oranges. It was like someone got hit in the face with a cream pie in our kitchen. Awesome.

Alright! I had been advised to freeze this sucker overnight, so in to the freezer it went. We had no idea how (if?) it would turn out at this point. However, we were planning on serving it to B. for her birthday. So here's hoping! 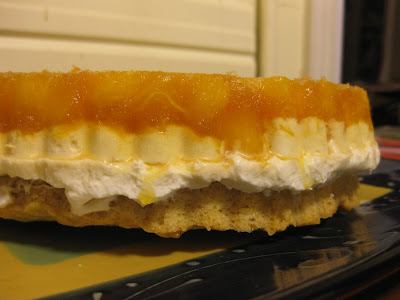 Somehow, I convinced the two-part tart pan to come off the Tian without ruining it. As to the flavor, well, see the above mentioned creamsicle reference. But the caramel orange sauce came out quite nice, resembling Grand Marnier (also, hate). And I thought it could have used more whipped cream. C. pointed out that we had more at one point, but then we painted the stove with it. So... there's that. 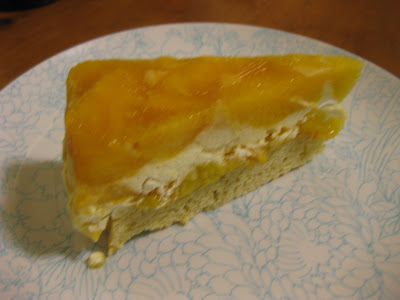 So if you like making complicated desserts that taste like a creamsicle, then go for it! Otherwise, skip it. But thanks to my wonderful roommates for helping me out with this - I never would have made it through the fight without you! (And I totally think we won.)

The 2010 March Daring Baker’s challenge was hosted by Jennifer of Chocolate Shavings. She chose Orange Tian as the challenge for this month, a dessert based on a recipe from Alain Ducasse’s Cooking School in Paris.