I feel like there's a lot of hating on Whole Foods lately, between the CEO's editorial about health care reform, and me bitching about their non-local produce and craptastic fish.  So here I'll attempt to offer a more balanced perspective and highlight some things about that I do like about our neighborhood market.

Whole Foods Market (WFM) may suffer from the commercialization of local and organic foods (for example, organic peppers from overseas), but I believe these problems are because WFM is a national corporation. They are attempting to nationalize an idea that is inherently small and decentralized.  However, some great things are being done here on the local level. For example, WFM sponsors University of Maine Cooperative Extension's food preservation programming and therefore makes possible some great public education. WFM is also having a 5% day for the Cooperative Extension on October 20th. Five percent of all proceeds from the day will go to Extension programming. 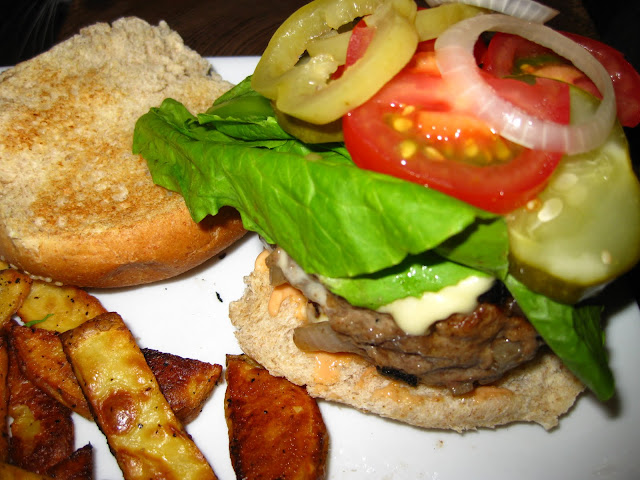 Another great thing about WFM is that it makes local meats more readily available. I have trouble with meal planning, and in an area where the Farmers' Markets happen on Wednesday and Saturday, it takes a little planning to have a locally grown grass-fed burger on a Thursday night. So recently, when I had a craving for some burgers and wanted to ensure that my meat was humanely-raised, healthy, and eco-friendly, I was able to pop over to Whole Foods and pick up a pound of ground beef from Caldwell Farms in Turner, Maine. And for that, Whole Foods, I thank you.

So what do you think?  Is the trade-off worth it? Ultimately, I'd prefer to have my dollars go directly to the farmers, without excess production costs and price mark-ups. But I have found that Whole Foods fills the role of a local co-op, in that you can stop by and shop when you want local or organic meat and produce. And while I'd rather have a local co-op, it seems that Whole Foods bought those up!