Dinner at the Dogfish Cafe

Come Friday night, M. and I realized that we'd gone a whole week without eating out (a major triumph!). So of course, we treated ourselves to... dinner out! We had an awesome meal at the Dogfish Bar & Grill on Free Street a few weeks ago, so were looking forward to trying their more upscale restaurant, the Dogfish Cafe.

There was a bit of a wait, so we sat at the bar, sampled some local draughts, and did some people watching. That part wasn't too hard since everyone was sitting really close together, what with this cozy little place being so busy on a Friday night. When we got to our table, we were a little confused by the menu... we'd looked it up online, but assumed that what we saw was the lunch menu, since there weren't any entrees, but just sandwiches and wraps. Turns out that is the dinner menu, but the specials that night (maybe every night?) were more traditional entree dishes, so we were happy. We started out with the mussels, which are served with "linguica sausage and roasted red peppers in a herb white wine sauce." 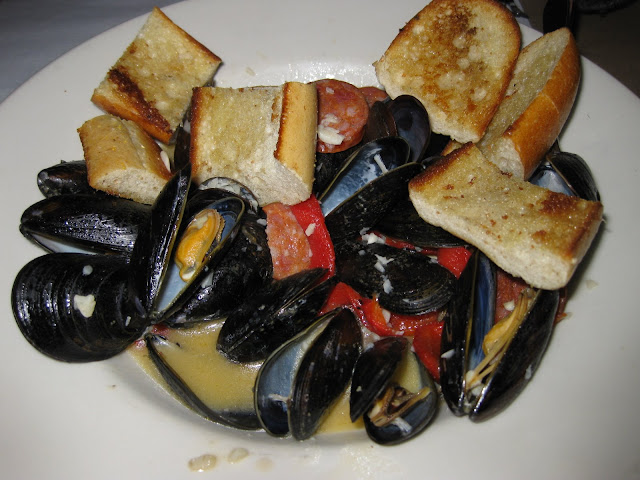 Absolutely delicious. You know the kind, where you want to slurp up as much sauce as you can with your mussels. These babies come highly recommended!

For our entrees, I ordered the seared tuna steak with curried potatoes and warm veggie slaw. 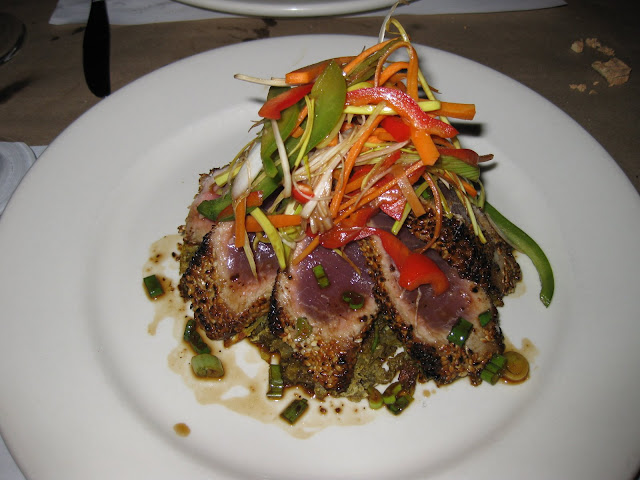 The tuna was cooked wonderfully, so no disappointment there, however, the curry potato cakes were terrible!! The curry flavor was way too strong and not complimented by anything. It tasted like the chef had just dumped curry into some grated potatoes and slapped it all on the grill. Besides, even if the potatoes had been done well, I don't think yellow curry is a very complimentary flavor to seared tuna encrusted with sesame seeds.

So when the waitress asked how our dinners were, I told her everything was great (with M. staring me down, urging me silently to speak out against the curry). But when she came to clear our dishes, she asked, 'how did you like the potatoes with the tuna?" and we unleashed our wrath. "It was terrible!" we cried.

And the waitress said she hated it too, but the chef told her that she just didn't understand. Didn't understand what she liked and what she didn't?? Our waitress said she'd give an anonymous complaint on our behalf, and we were grateful. If they served one more curry potato cake that night, it was one too many! So that was a pretty funny experience, and I was happy for our waitress' candidness. 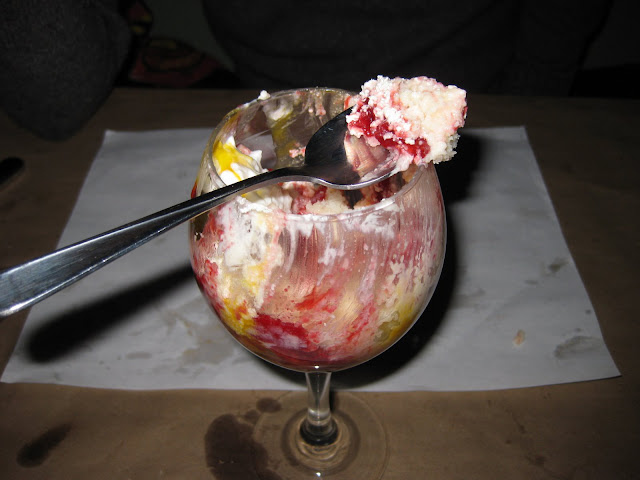 Described as a 'spanish tiramisu,' this strawberry tres leches was so good! I hope for your sake it's not just a special dessert, because this one is worth stuffing yourself for. As you can see, we were so eager to try it, I forgot to snap a pic until it was almost gone.

So yeah, Dogfish is definitely a go. Try 'em both- one is billed as more casual than the other, but I found they're both pretty laid back.