We braved the towering snowbanks and poorly shoveled sidewalks to walk down to Izakaya Minato, the newest addition to Portland's Washington Ave., last night. This petite Japanese eatery opened a few weeks ago next to Terlingua and has gained an instant following within the neighborhood. The bar has been consistently full the few times I walked by after its opening.

When we visited, there was some seating available at a communal table, but the hostess offered us a table in the dining room—which I didn't even know existed, since it's not visible from the street. There's another room off the bar that has table seating for about 20. The whole place has a very homey vibe and was full of friendly people. We waved to some neighbors, and throughout our meal compared rave reviews with the couple seated at the table next to us. 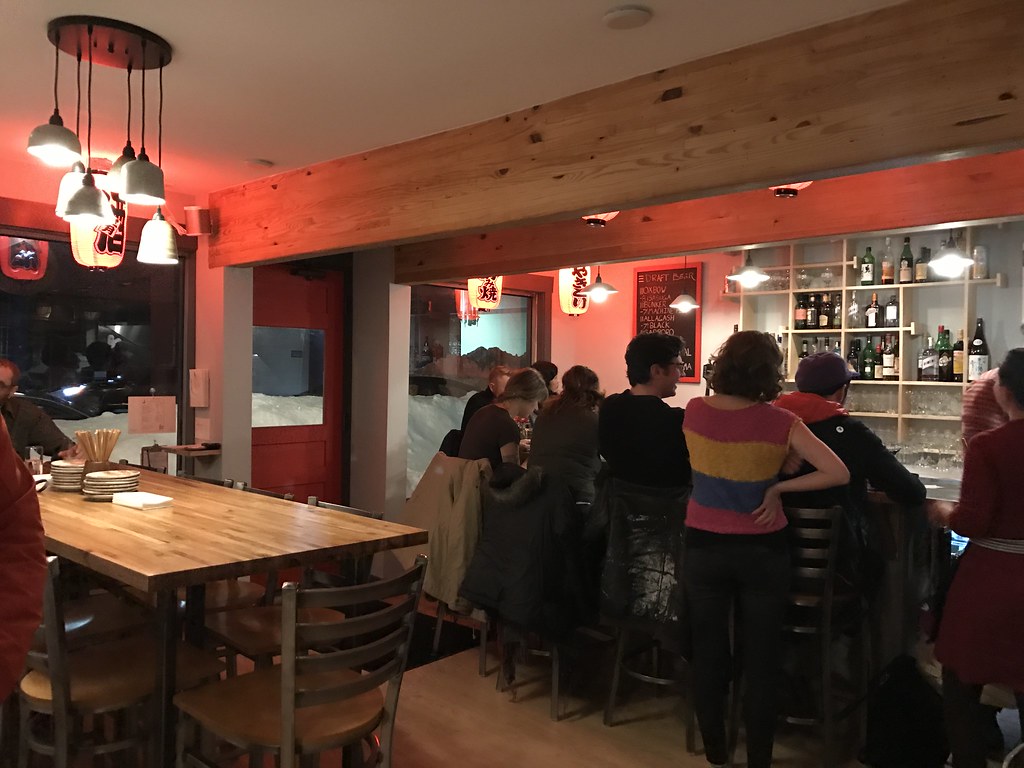 Once settled with our menus we checked out the drink choices. There's a selection of Japanese bottled beers, mostly local drafts, sake, and cocktails (many made with sake). I went with a ginger kombucha from the Urban Farm Fermentory and turned my attention to the dinner menu.

The menu has a good mix of vegetable, seafood, and meat dishes, as well as noodle and rice dishes. While there were many items we wanted to try, when our server came, A. ordered sashimi omakase for two (market price that night was $14 for one serving) and three other dishes. As is common in small plates restaurants, we hung onto our menu in case we wanted to order more food later. 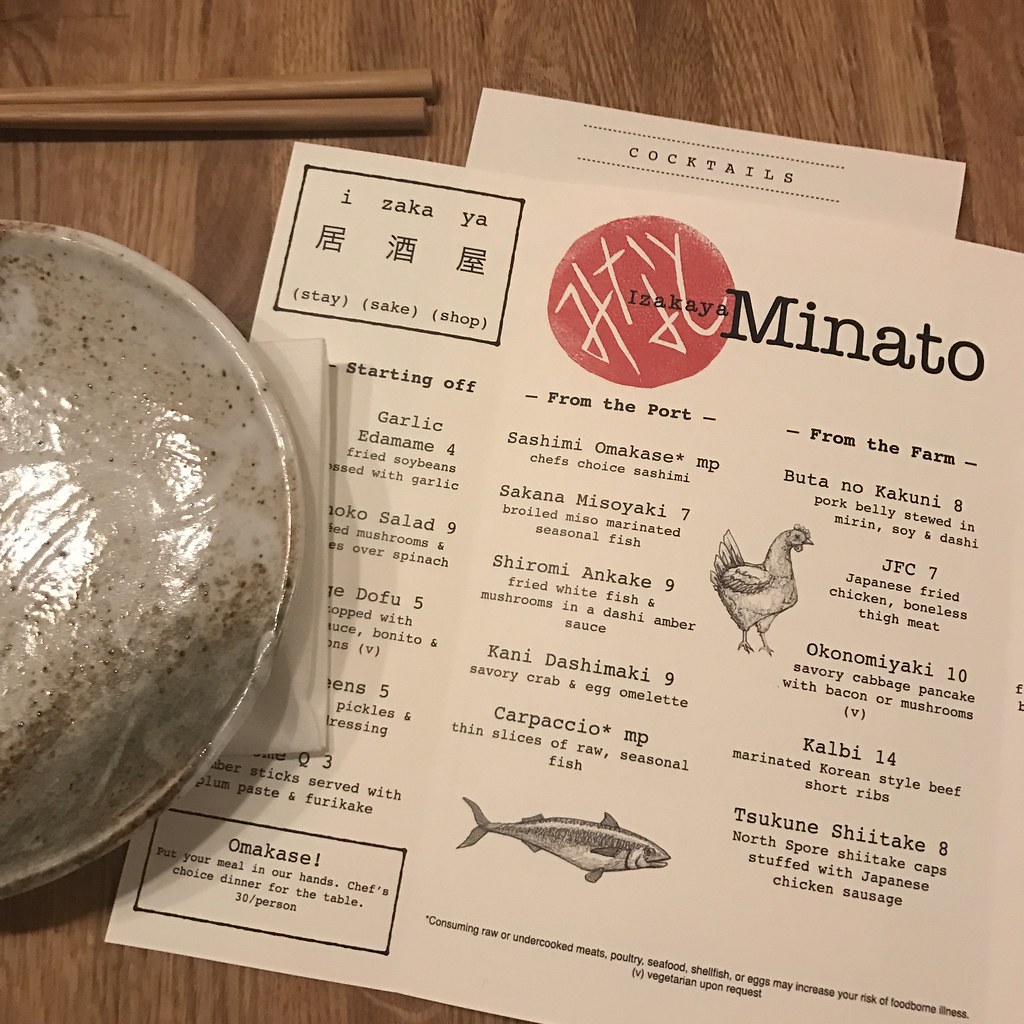 The sashimi came first, a beautiful arrangement of uni, scallop, tuna, fluke, and...ah, shoot, I was on a roll there, but forget the last one. The plate also had artful arrangements of thinly sliced vegetables and herbs that added some flavor zings to the cool, fresh fish.

Our server came back to check on us and declared the uni his favorite—I had to tell him it wasn't mine, but that I was working on it. I think that's the first time I've ever had straight uni; usually I encounter it in other dishes. It has a buttery texture, but a pretty strong briny flavor that, like oysters, may be an acquired taste for some (including me, I guess!). 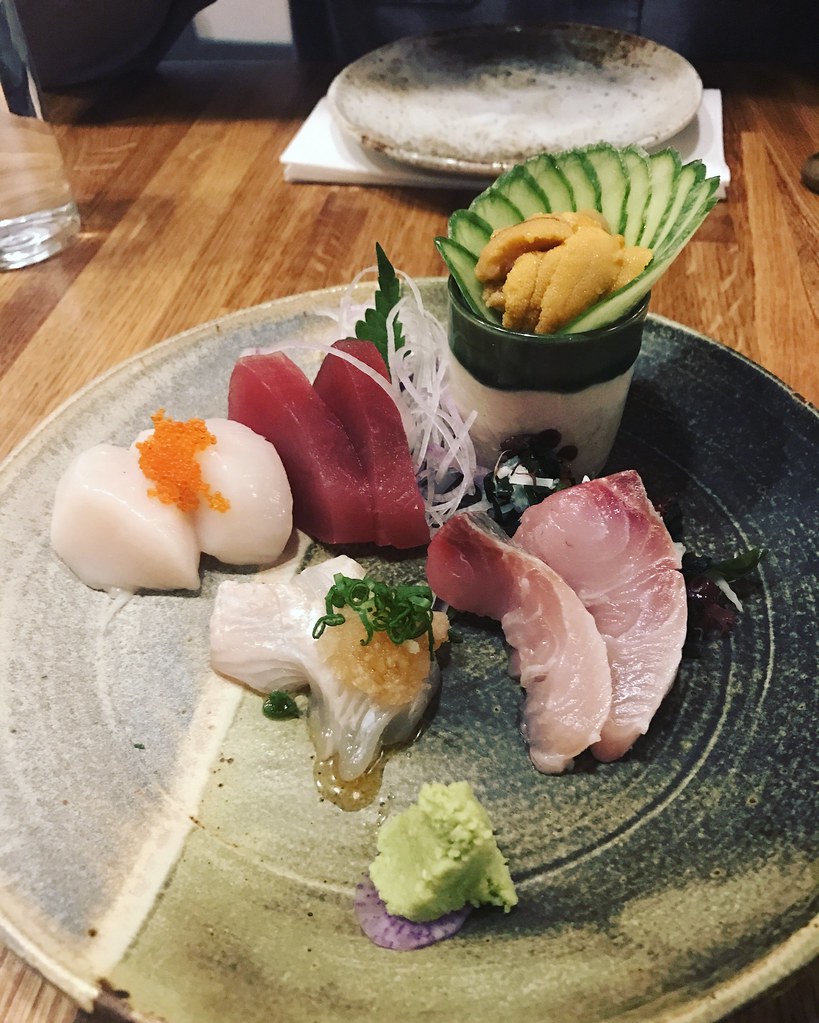 We finished all of our courses before the next one came, which was kinda fun—we sat eagerly awaiting the next surprise.

Our next course, the kani dashimaki or crab and egg omelette ($9) was juicy and savory. So much flavor was packed into the thick slices of egg. The pile of shreds on the plate was daikon radish with some soy sauce, which I didn't love, so I went without after sampling it. 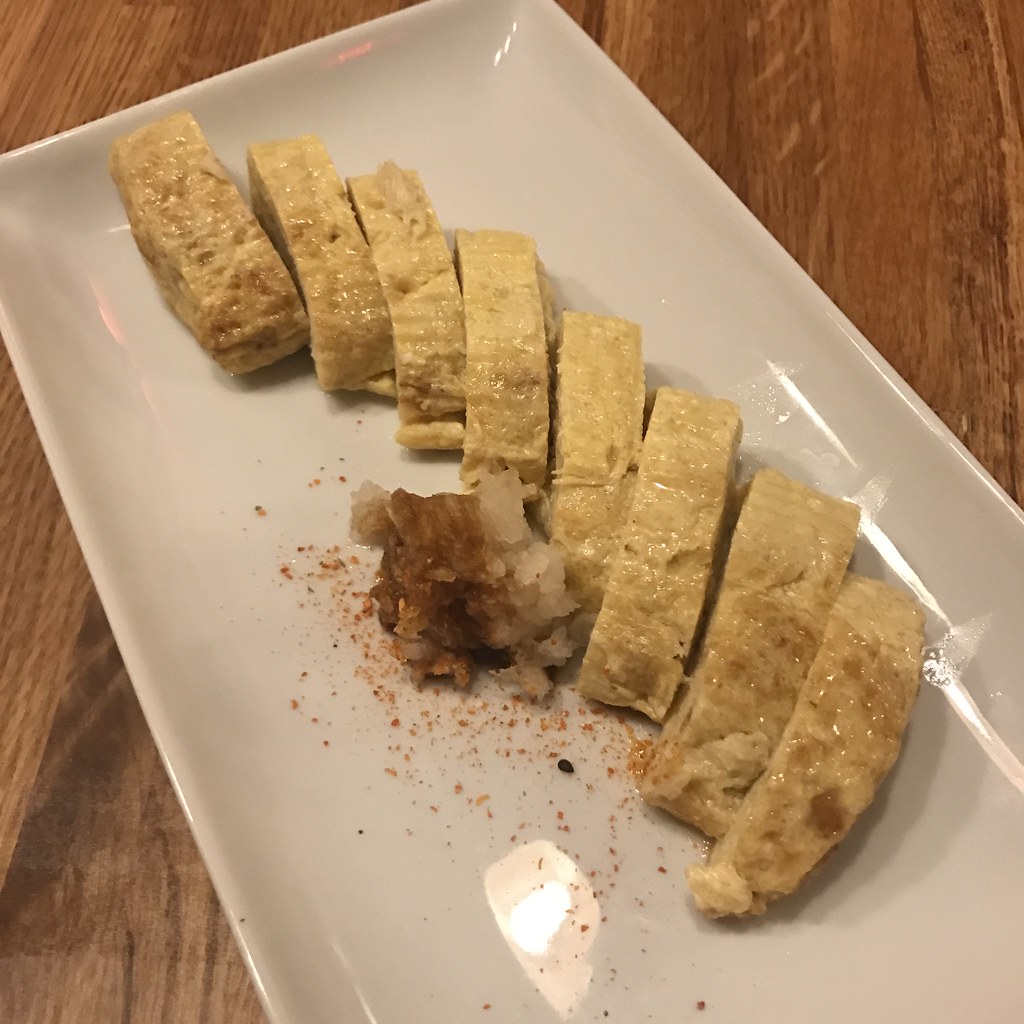 The tsukune shiitake arrived next—mushrooms stuffed with chicken sausage and served with chili Kewpie mayo ($8). Fortunately, they were sliced in half (we all know how crazy hot a stuffed mushroom can be) since we devoured them so quickly. The little caps were salty, savory bombs and dragging them through the spicy mayo gave it a smooth richness. If I had any food guilt issues, this dish would have triggered them! 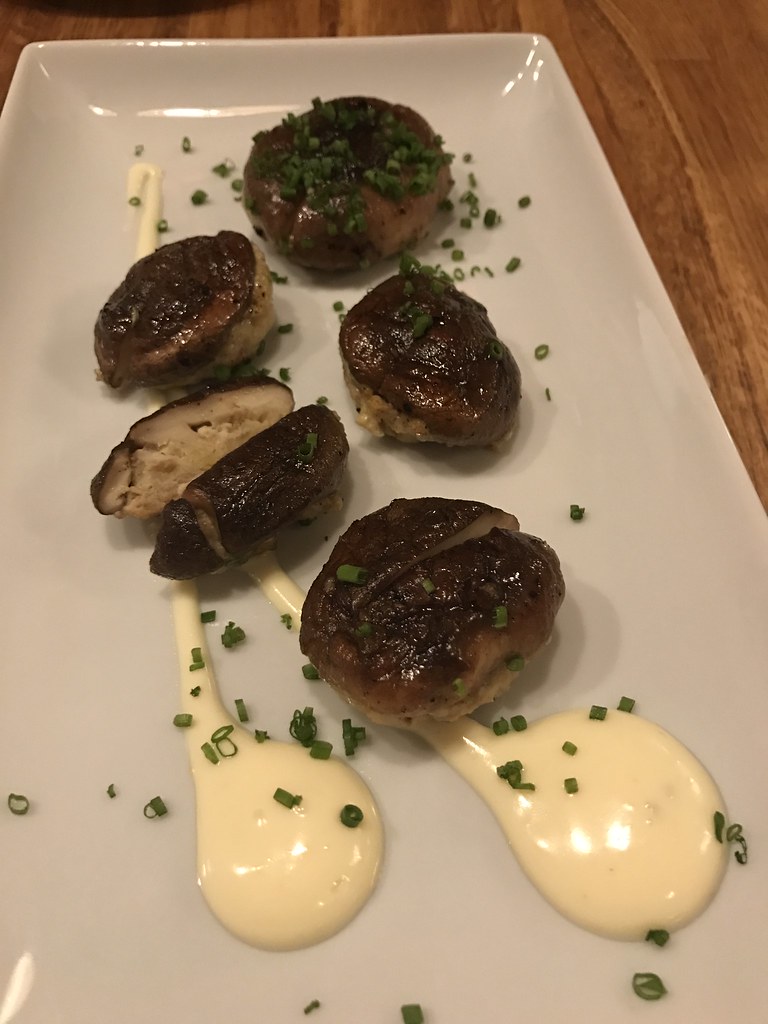 And lastly, another savory meat treat—the kalbi or Korean-style short ribs with kimchi ($14). These thinly sliced ribs were doused in a spicy, sweet sauce then charred on the grill, and the combination of crispy fat and tender meat was addictive. They're also fun to eat, gnawing around the bones for little bits of flavor. The kimchi added a nice crunch and cut the fatty meat with its tart, fresh flavors. 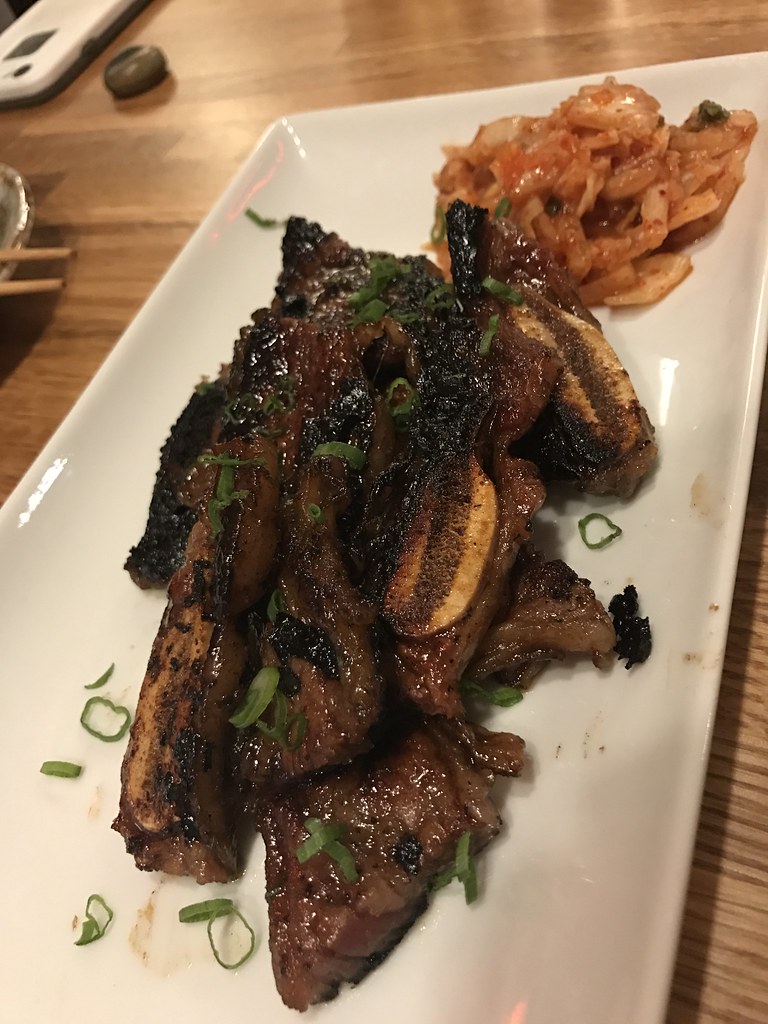 Deciding that we'd ordered the perfect amount of food, we declined another round and dessert as well. Our tab came to $76 before tip (includes three kombuchas), which while not cheap, was a fair price for the high-quality seafood and skillfully prepared small dishes we enjoyed.

My takeaway is that Izakaya Minato a great hangout spot that's different enough to feel casually hip, while the food is a good mix of the familiar and novel. As of now, the Izakaya opens for dinner at 5 p.m. and is closed Sundays.
No comments:

I joke that there are certain hobbies I'm saving for later—like knitting. I figure I've got a long life ahead of me (knock wood), so I've got to save some things for later. Homebrew fell into that category for a long time, and plus it seems like a mid-30s hobby... your taste in craft beer needs to develop and you need to have enough disposable income for the pricy supplies. So this past fall, something finally clicked, and I stopped seeing homebrewing as a somewhat boring activity, and became interested in trying it.

Fortunately, a lot of the men in my life have dabbled in homebrewing, so there was no shortage of family members who wanted to give me their equipment and dole out advice. I started by slowing gathering the equipment and helped a friend brew a Scotch ale in order to get an overview of what the process was like. 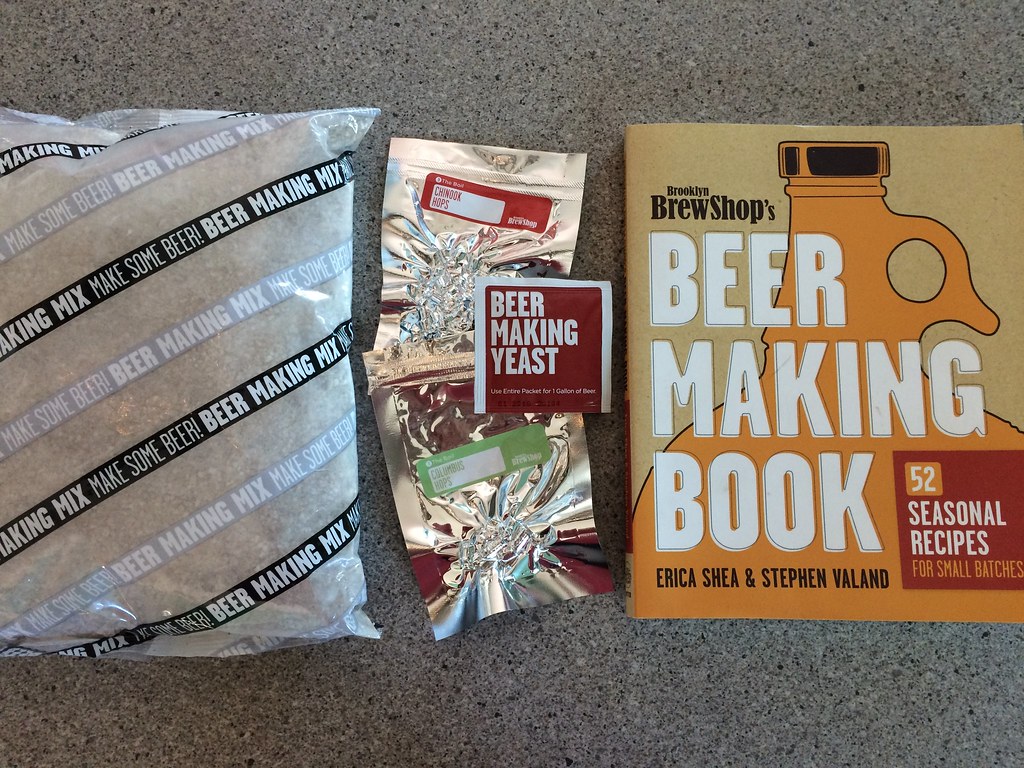 After receiving a beer kit for Christmas (thanks, Liz!), the time had come to jump into making my own batch of beer. I started with a one-gallon kit from Brooklyn Brew Shop for Everyday IPA. The idea behind Brooklyn Brew is for city dwellers with limited space to make small batches of beer, so the kit comes with everything you need minus some common kitchen items. My next batch will be five gallons of beer or about 50 12-ounce bottles (!!).

The first step is heating the grain (aka mashing) to create the wort. This involved heating the grain with water to a certain temperature, maintaining that temperature for a period of time, then straining out the grain. This step does a few things, but its primary purpose is to turn the starches into fermentable sugars. 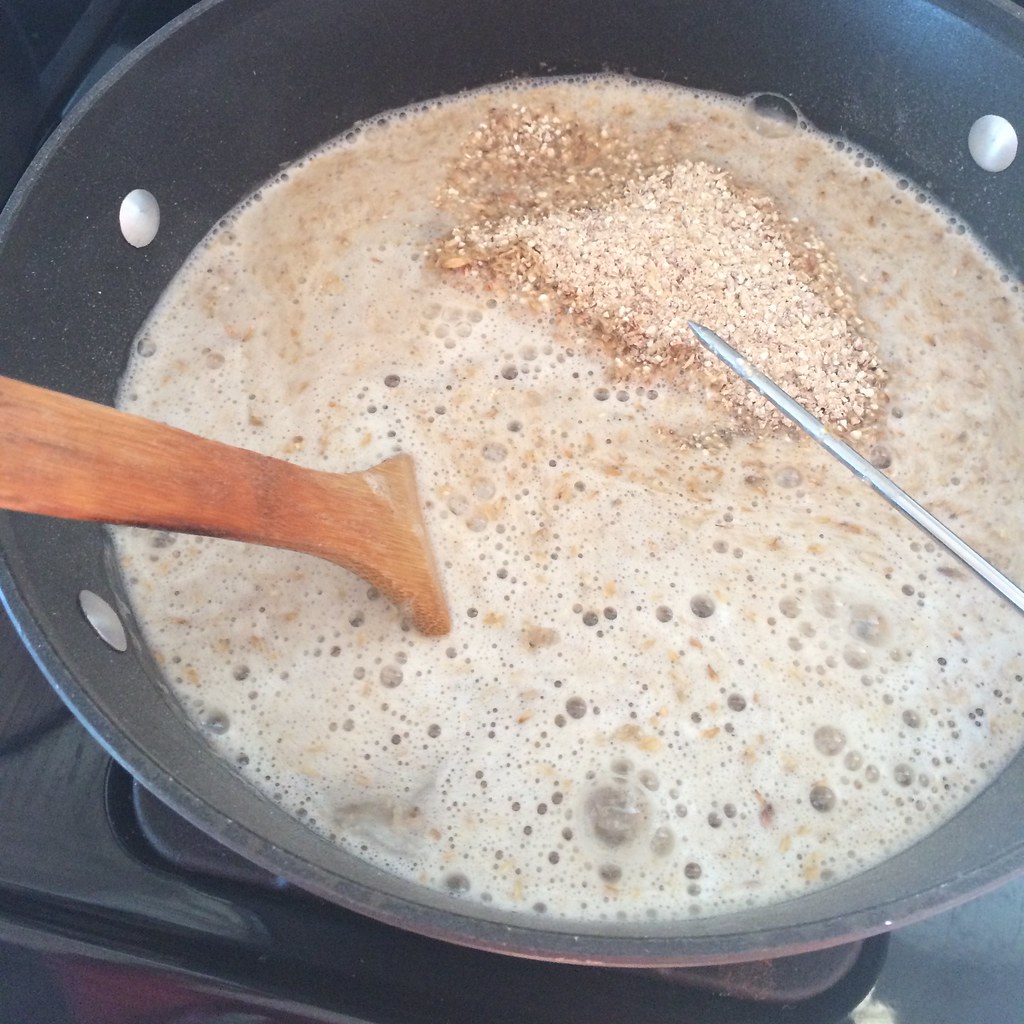 The next step is to boil the beer and add hops as you go. The boil takes an hour, but my IPA recipe called for me to add hops every 15 minutes. Hops are added in different stages to contribute to flavor development (i.e. creating bitterness when added at the beginning of the boil and more volatile hop flavors, like pine or citrus, when added at the end).

After the boil was complete, I put the pot in the sink to cool. I do have a fancy wort chiller, but it wasn't worth it to hook it up for a gallon of beer—an ice bath in the sink brought my beer down to 70*F fast enough. 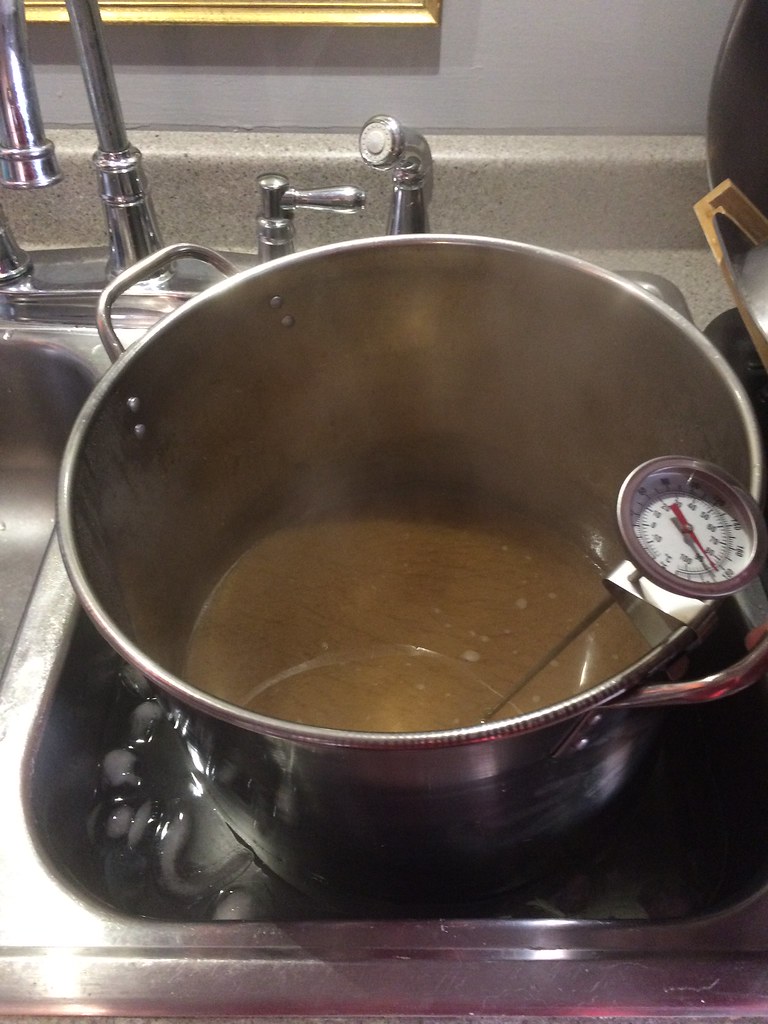 After the wort was cool, I add the yeast and funneled the beer into its fermentor. I used the one-gallon growler that came with the kit, but my next batch will go in the five-gallon glass carboy my dad gave me (thanks, Dad!).

After sealing the beer off with a tube/cup of sanitizer situation, I let the beer sit on the counter for two days. I was pleased to see signs of active fermentation happening, which was a sign that I hadn't killed my yeast off by adding it to wort that was too warm and that my yeast wasn't old/inactive. 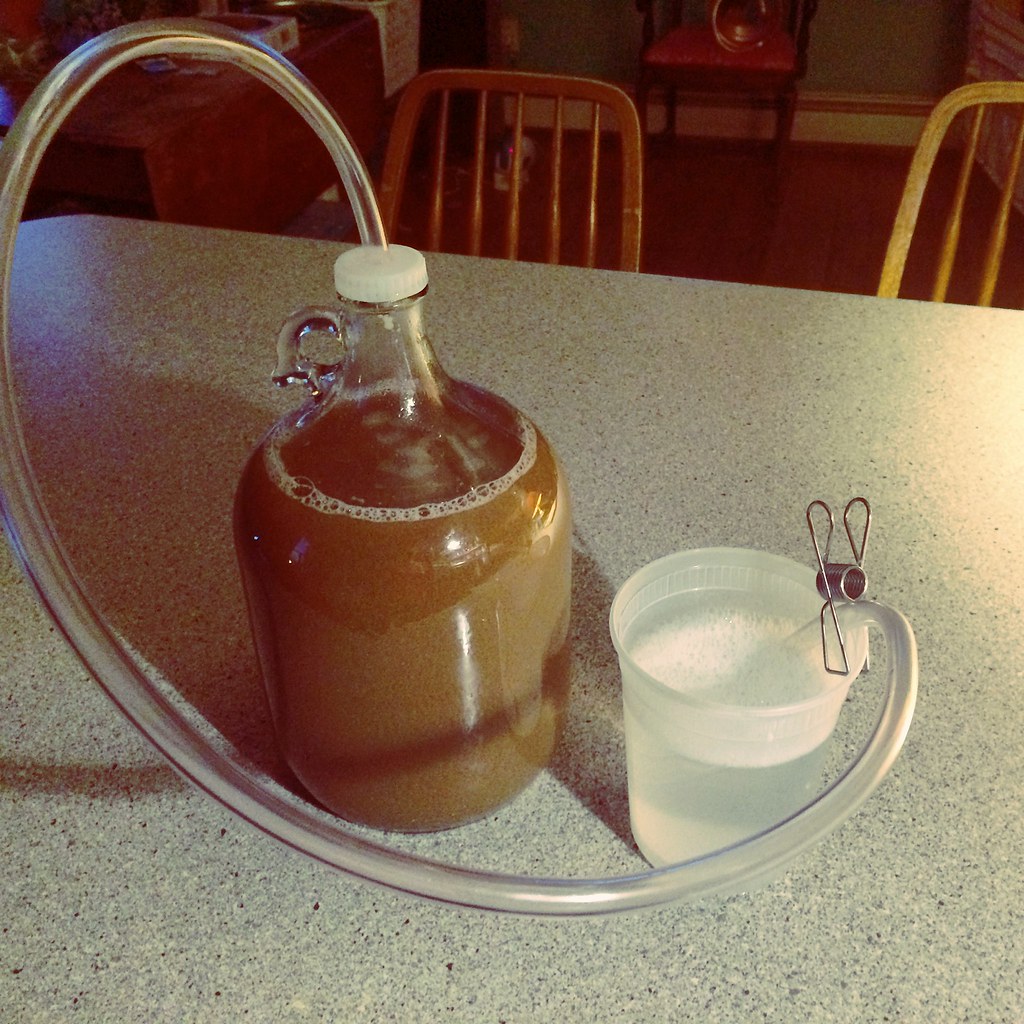 Two days later, I replaced the tube with an airlock and put the growler in a dark place for two weeks to fully ferment.

After two weeks, the beer looked pretty much the same, save for the couple of inches of sediment at the bottom of the growler. This is called the trub and is made up of yeast that has died after living its short, but useful, life. We thank you for your service, yeast. 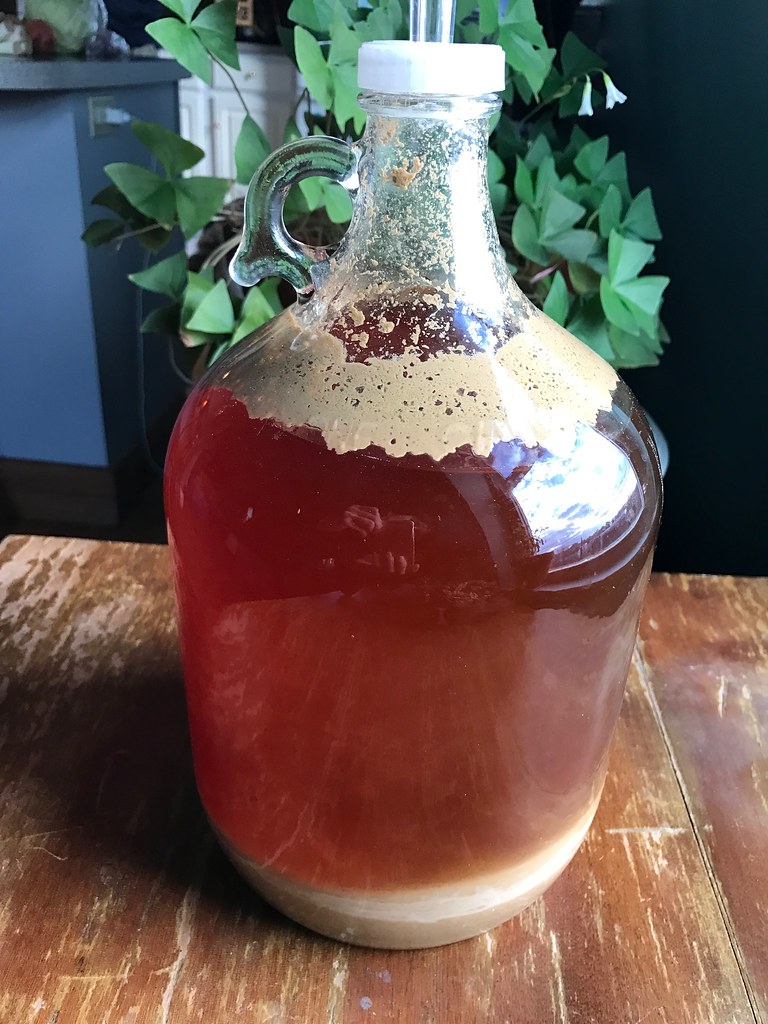 And now bottling time! The part where I probably screwed it up, due to sticking my less-than-sanitary hand into the beer a few times.

In order to create carbonation, I added some honey to the beer, before I siphoned the beer into four 22-oz. bottles (only four?!?) and capped them. Theoretically, the remaining yeast will feed on the sugar, create gas, and fizz my delicious-tasting IPA. There's a lot that could have gone wrong, so we'll see. 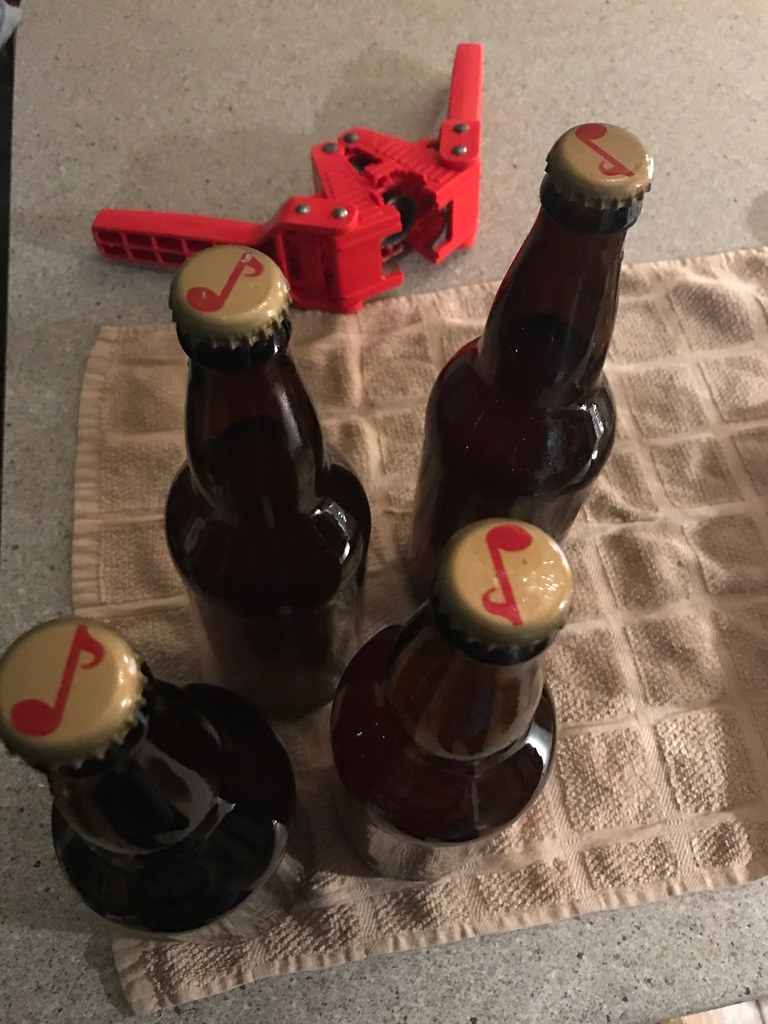 Two more weeks in the hole, and the beer will be ready. Stay tuned to Instagram for the taste test.
No comments:

I often complain about going to Westbrook, not for any particular reason other than Portland-centrism and that I always manage to get lost whenever I attempt to navigate to or through our neighboring city to the west. But add Big Fin Poké  to the small, but growing, list of things I'll happily (ok, begrudgingly) travel to Westbrook for. 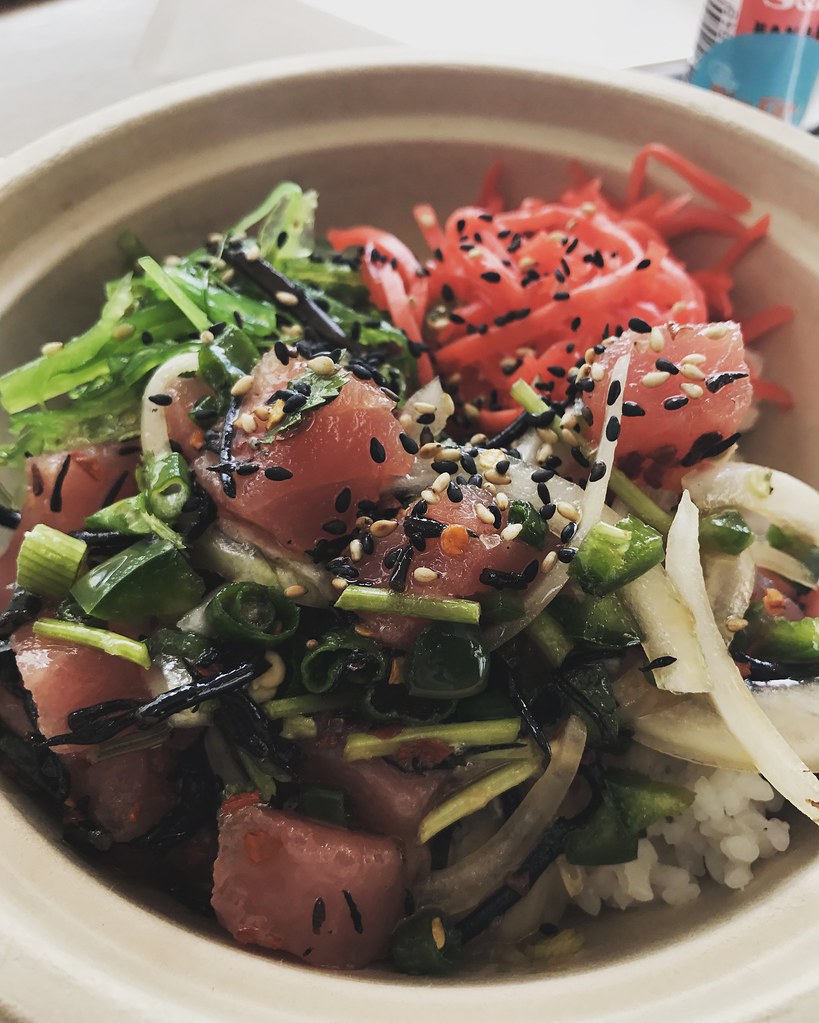 Poké, if you're not familiar, is best described as deconstructed sushi. It's a Hawaiian seafood salad made up of raw fish, seaweed, onions, and seasonings like ponzu, soy, or sesame oil. I will be annoying and tell you that I first had poké years ago from a grocery store deli in Maui. It was way better than poi, another traditional Hawaiian food, that I'm pretty sure you had to grow up eating to appreciate.

But poké has arrived on the mainland (or at least on the upscale menus and glossy magazines of the mainland), riding the popularity of sushi, "clean eating," and food served in bowls. Here in Maine, we now have Big Fin Poké on Westbook's Main Street in a space with large windows, hardwood floors, and high ceilings. 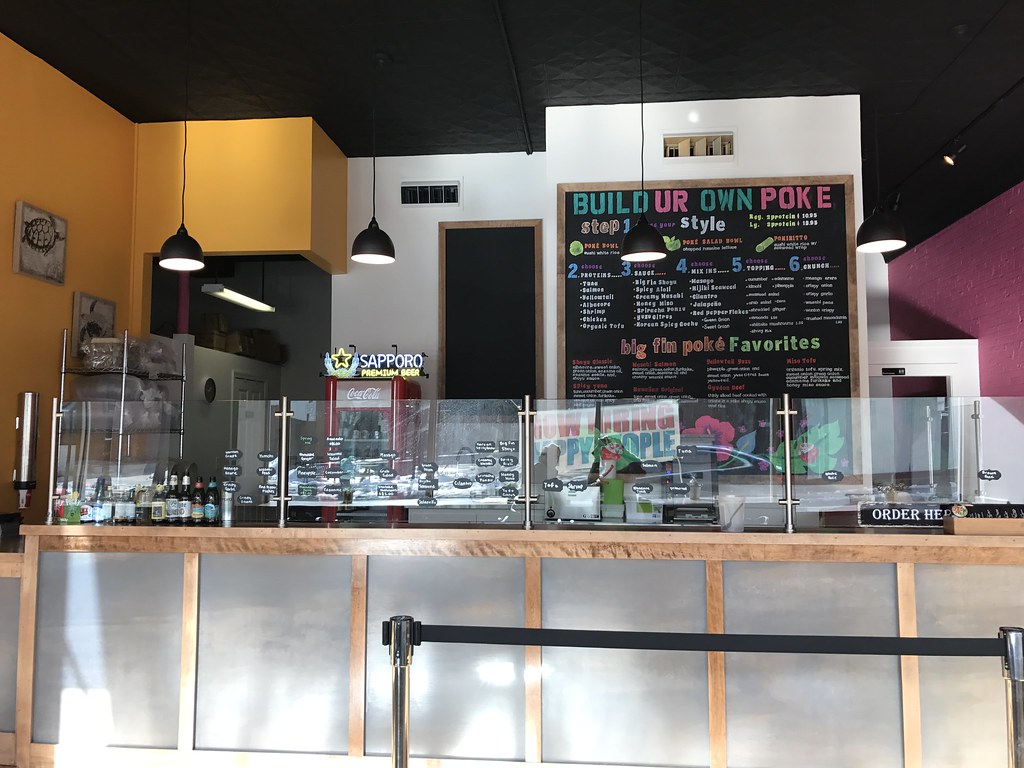 You can choose to make your own poké bowl or choose from selections of Big Fin favorites. I went with the Hawaiian Original, as making my own from the myriad options seemed overwhelming. I thought the tuna, green onion, sweet onion, chili flake, sesame oil, and seaweed sounded like a classic combination as an introduction to poké. I also said yes to toppings pickled ginger, sesame seeds, seaweed salad, jalapenos, and cilantro (see what I mean about overwhelming options??).

Poké bowls come over rice in a regular size for $10.95 (or a large for $13.95). You can also order your fillings wrapped in sushi rice and a seaweed sheet as a "pokiritto." 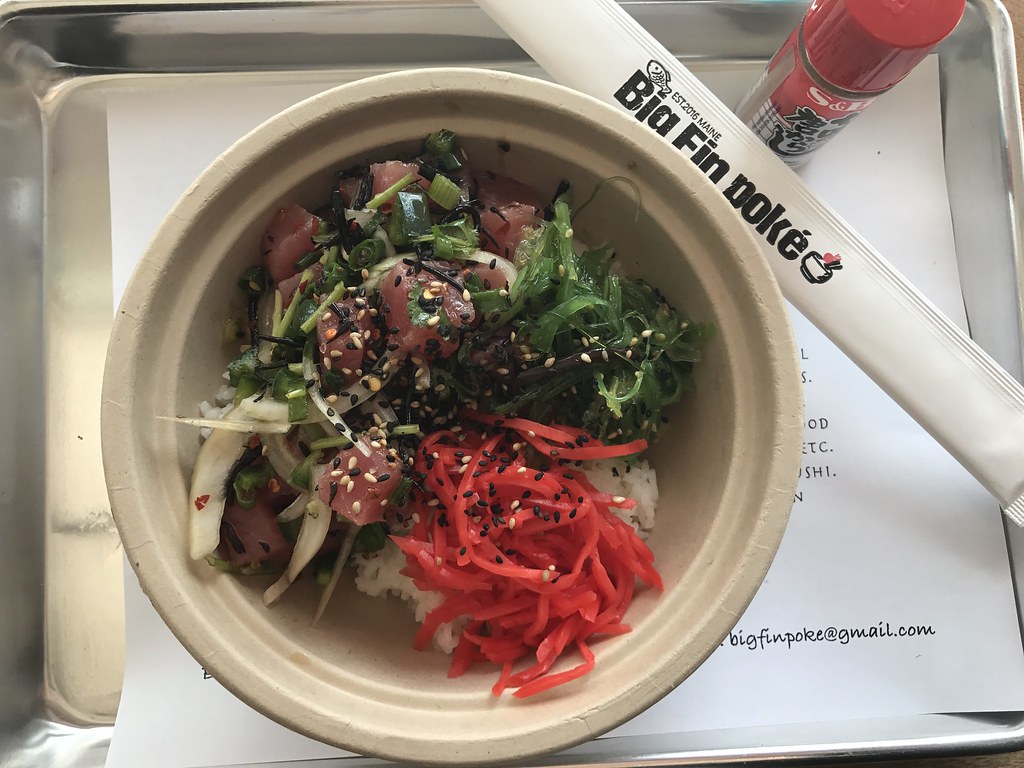 The poké was made with big, solid chunks of tuna and the whole bowl was a delightful experience in contrast: cool fish, warm rice; soft fish, crunchy onions and ginger. The seaweed was mild, if you're put off by overly sea-y (sea-ish?) flavors like I can be. It was a light but filling lunch that felt healthy but still indulgent.

On future visits I'll try yellowtail poké with pineapple and yuzu sauce or spicy tuna with cucumber and add some avocado. While it's not necessarily on the beaten path for many Portlanders, you should go out of your way to try poké for lunch or an early dinner.