I went to a Bourbon tasting at TIQA two weeks ago, after giving a book talk at a retirement community in York (where I was regaled with drinking stories from the adorable elderly crowd). The event was held in a private room at TIQA, past their large dining room, and was set up much like a beer festival. The only misstep was that all the high-end Bourbons were at one table all together and so a big line formed. But that gave me plenty of time to talk to people I probably wouldn't have otherwise while waiting. 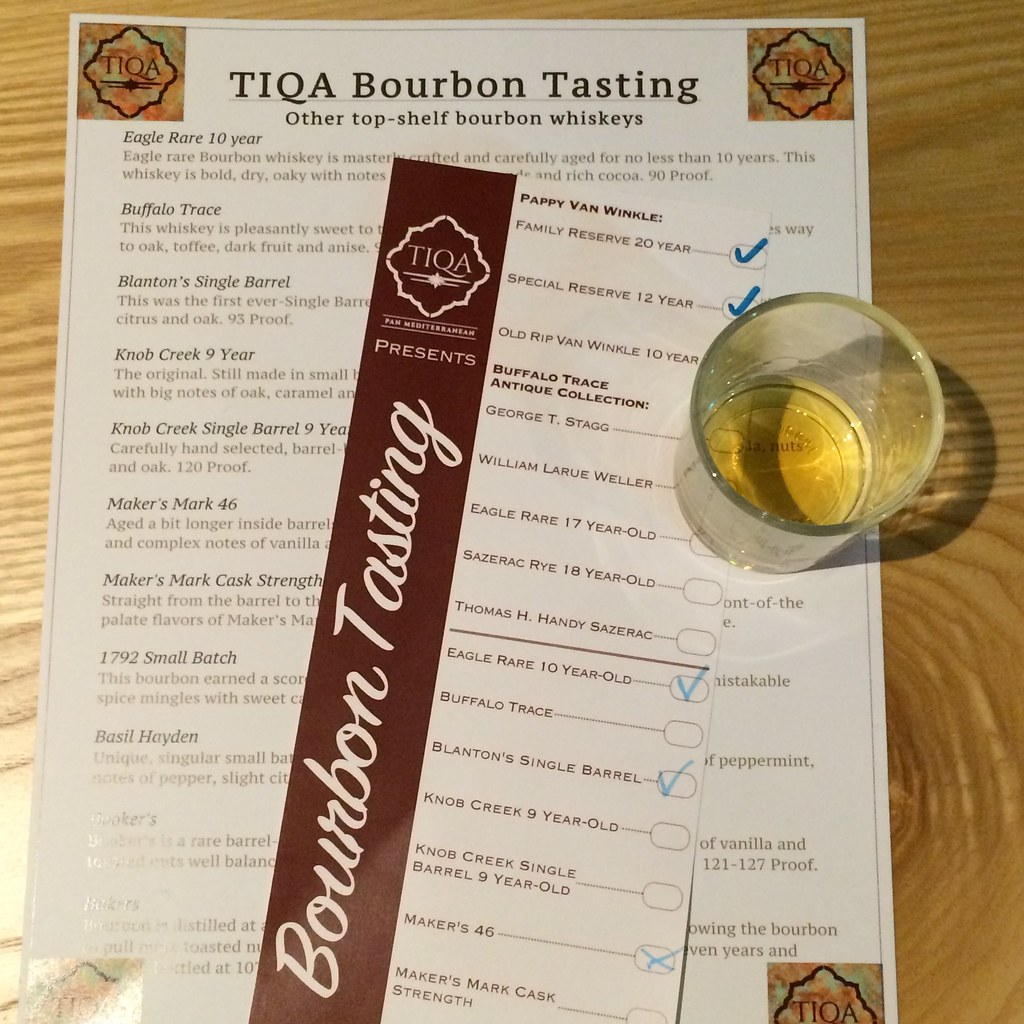 The featured Bourbons were all from Sazerac and Jim Beam - I know there's many listed above, but check out this family tree of Bourbon from the King's County Distillery Guide to Urban Moonshining and you can see that, despite the variety, they're all from two parent companies.

I tried five tasting pours, knowing I couldn't handle much more than that - props to anyone who was able to make it through all 19 available.

I started with the Maker's 46, described in the tasting notes provided as aged in barrels with seared French oak staves with intense flavors and complex notes of vanilla and caramel. The "46" comes from the original trial number which the distiller aged a bit longer.

Still not willing to brave the line for the high-end stuff, I turned to the neighboring table for some Eagle Rare 10 year. My intention was to compare it to the 17 year at the other table, but once I got to the front of the line, I just went for the Pappy (obviously). The 10 year was drier than the Maker's 46 with a richer flavor.

I snagged a sample of the Blanton's Single Barrel to sip while in line, enjoying its sweet, citrusy taste. It's really interesting how wide the flavors within the world of Bourbon can be.

Pappy Van Winkle has quite the following, making its bottles hard to find, so I was excited to try the 20 year. Fortunately (for my wallet), the extra years made it a bit too richly flavored for me, and I enjoyed the 12 year more. (The 10 year is bottled at cask strength, and I've found that the higher alcohol content isn't for me).

While I'm not sure of these Bourbons' availability here in the state (check Maine Spirits for availability or ask your liquor store to order you a bottle), I do know that TIQA has the remainders of these bottles -- including the Pappys -- on their shelves. So while supplies last, you can catch some of these fine Bourbons at TIQA's bar, in addition to their regular selection (which includes Nikka, a Japanese whiskey).

I attended this event as a guest of TIQA's. I did not receive any compensation for this post, and the opinions and copy contained wherein are mine.