Phew. Now that I've looked back on these photos of my weekend in Brooklyn, there was a lot of eating and drinking. As usual, we were just killing time between meals. We visited Original Roomie A.'s favorite spots around her friend's apartment, where we were staying in Williamsburg. My special request was Smorgasburg, the outdoor food festival that happens every Saturday in the warmer months, and Mission Chinese, but other than that, A. curated our spots.

It's hard to avoid comparison of Brooklyn and Portland, in that you think to yourself, what's all the hype about here? Things are different in Williamsburg, for sure, but at the same time, I was again reminded why Portland's food and drink scene is so impressive. The food we enjoyed at the hip spots could have come from several restaurants in Portland - I didn't once think, "oh, this could never work in Portland" or "you can't get X this good in Portland." Aside from the chopped salad restaurants that we're lacking, our Portland darlings like Duckfat, Eventide, East Ender, and Central Provisions could all hold their own against the similar Williamsburg restaurants in which I ate.

But the waits for a table are shorter in Portland, and you'll never have to stand in a vestibule overhearing an annoying conversation about how a gaggle of 20 somethings should just go to that rooftop bar and order bottle service (yes, yes, you should go and do that - please).

So speaking of waiting in line, we started with Mission Chinese in Chinatown, and arrived early (5:15) to find a short line. We only waited a few minutes before we all filed in and were sat. Mission Chinese is a fun spot, with dim lights, loud club music, and bizarre decor. 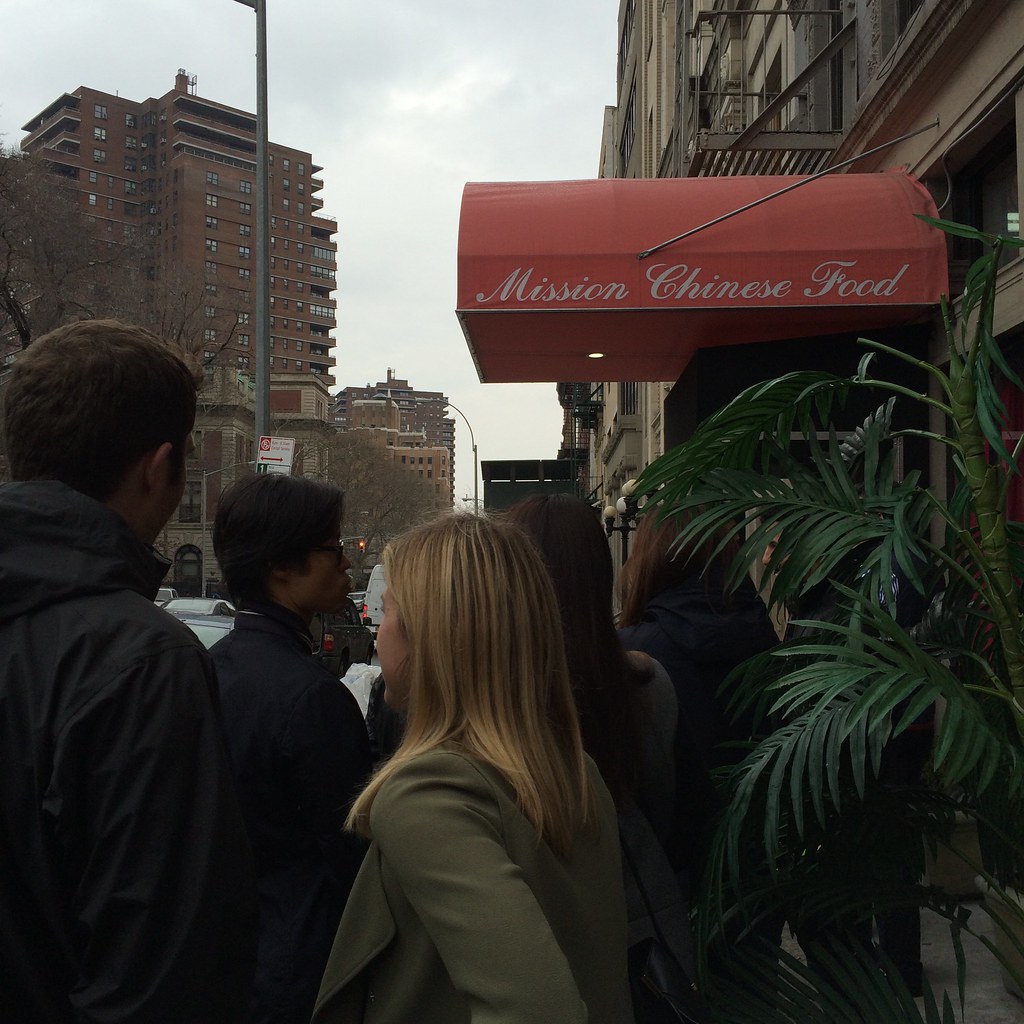 We ordered a pickle plate, beef tartare, kung pao pastrami (below), and salt cod fried rice. The kitchen sent scrambled egg and scallion dumplings, which along with the beef tartare were the standouts. The liberal use of sichuan peppercorns and their mouth-numbing effect failed to impress us; it just interrupts your ability to taste the food. But our Evil Twin Mission Goze, a salty, sour beer, paired really well with the food.

But overall, we were not in love with Mission Chinese - it was fine for what it was, but if we'd waited over two hours (as the wait is during prime time), we would have been aggravated. 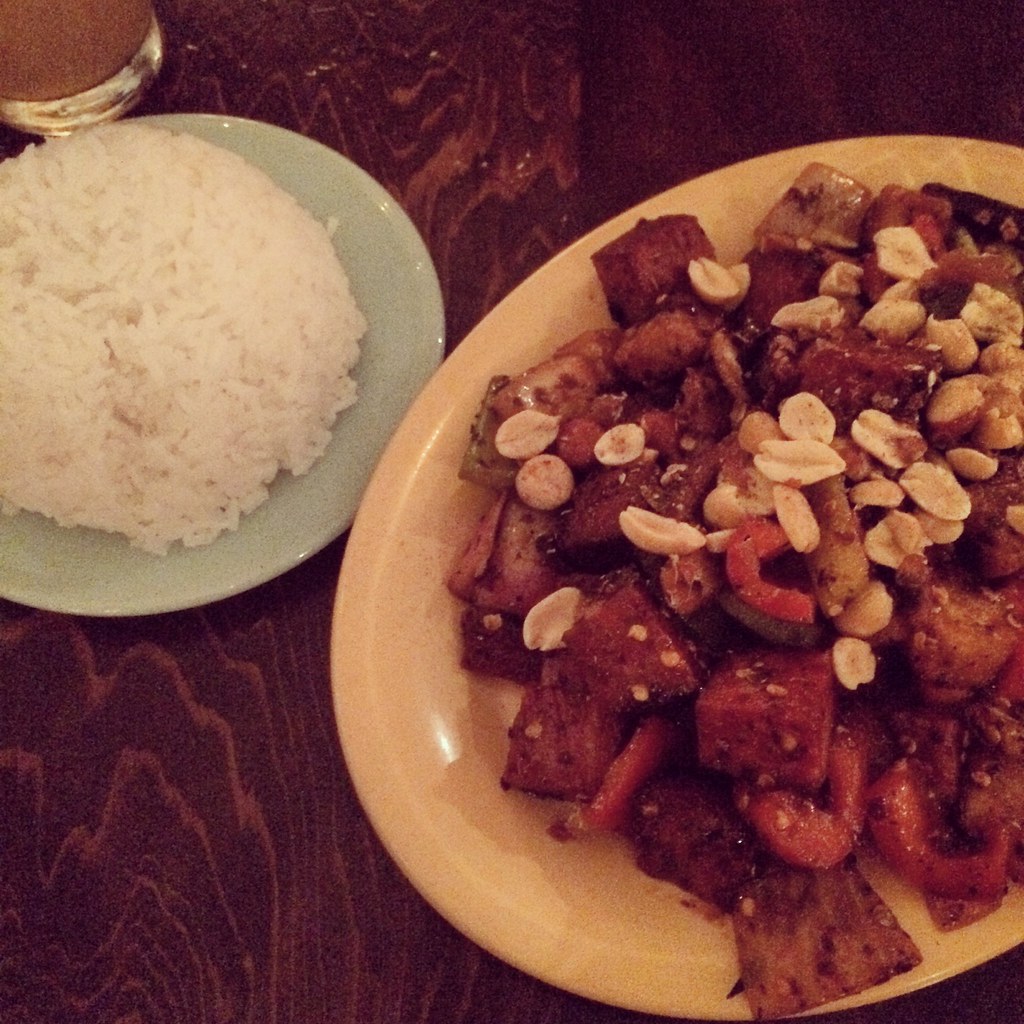 Later in the evening, we enjoyed lovely cocktails at Maison Premiere, an adorable French oyster and cocktail bar. There's a long list of absinthes, the bartenders wear delightful old-timey outfits, and the cocktails were fabulous. I had a Mai Tai and A. enjoyed a Lexington Crusoe: Plymouth Sloe Gin, Malort, pacharan, lemon, pineapple, and blackberry. 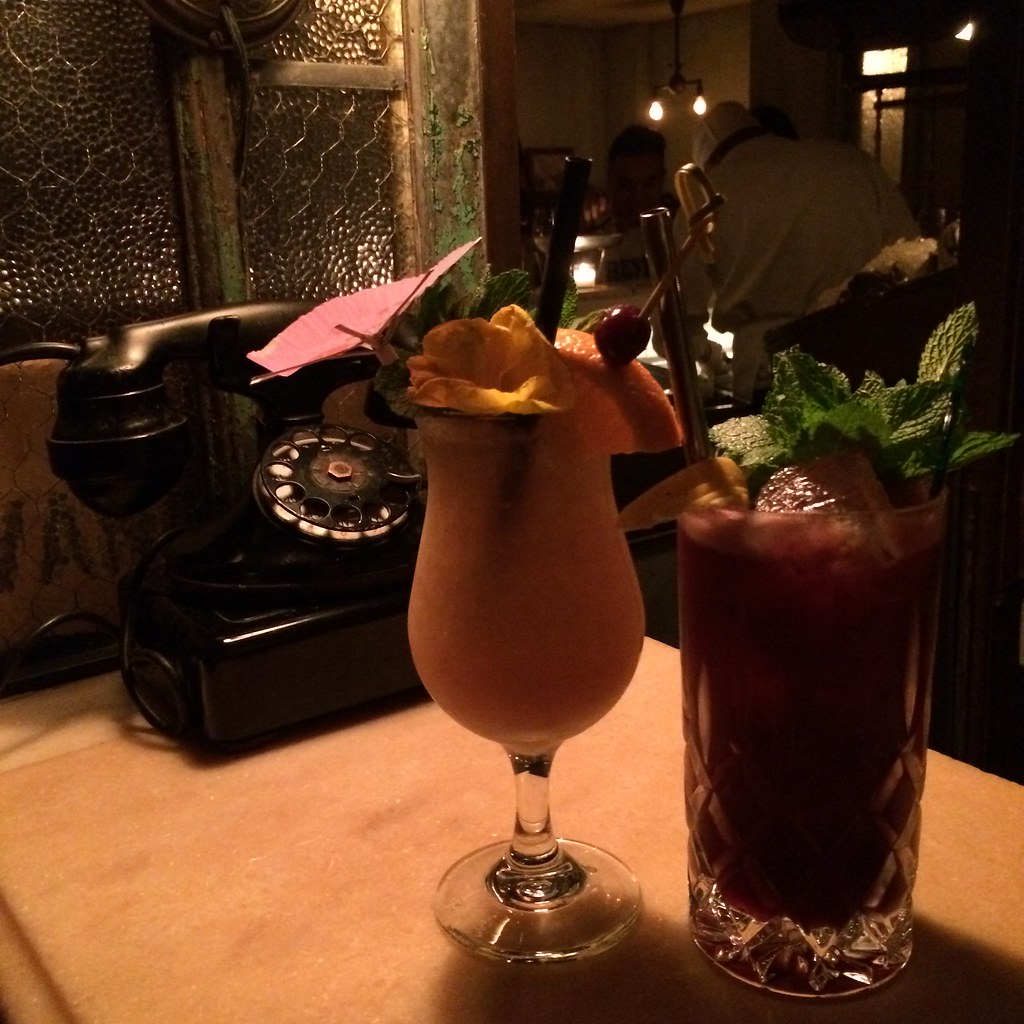 We checked out Sweet Chick, a new Southern-style restaurant to enjoy a late-night drink. There's a entire section of the menu dedicated to chicken and waffles, so I loved the place immediately, even though the entire bar seemed to be covered in a fine layer of Aunt Jemima.

A. enjoyed a gin and limeade cocktail while I was drawn to the Scythe and Sickle: tequila, mezcal, pineapple juice, lemon, and spicy agave bitters. 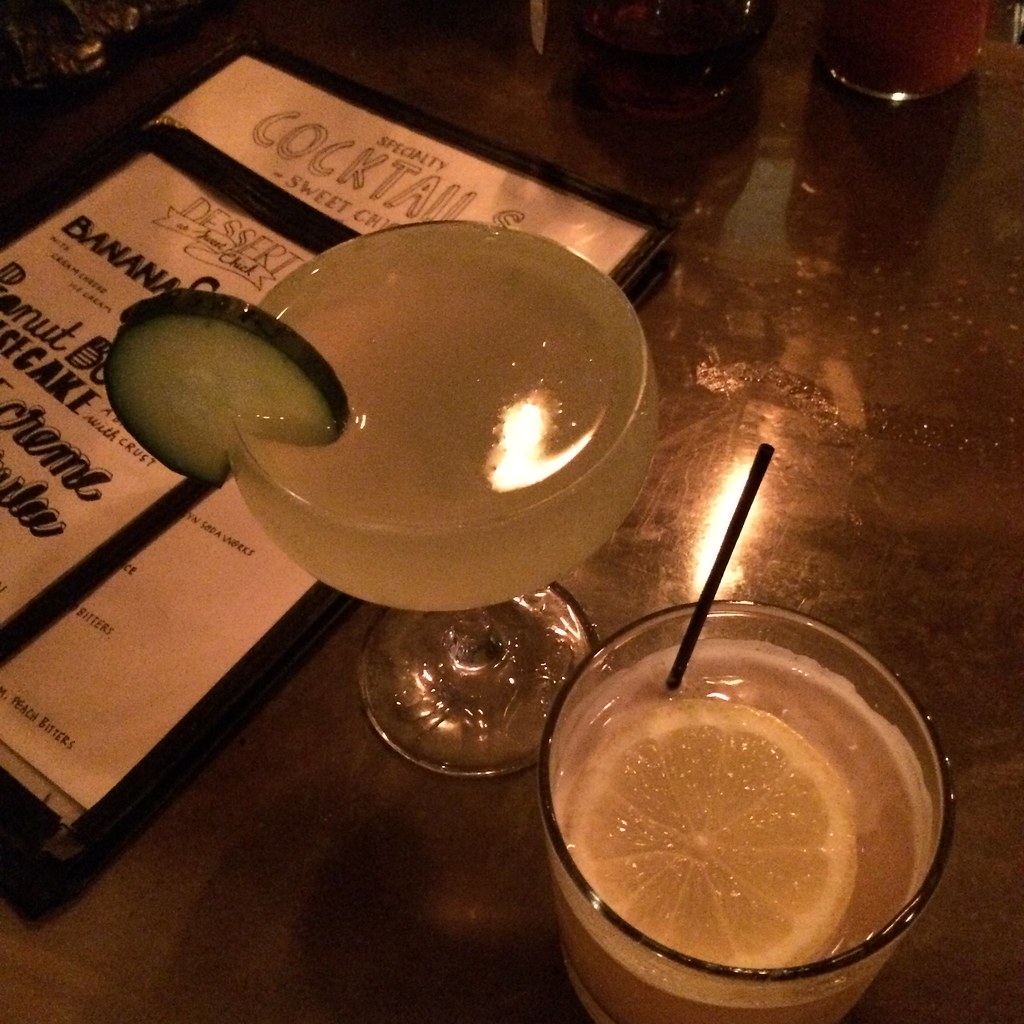 The next day, we headed to Smorgasburg, the outdoor food festival. It was extremely windy, so we didn't stick around for long - we were afraid we were going to witness a decapitation by flying sign, so we headed out after a few snacks. 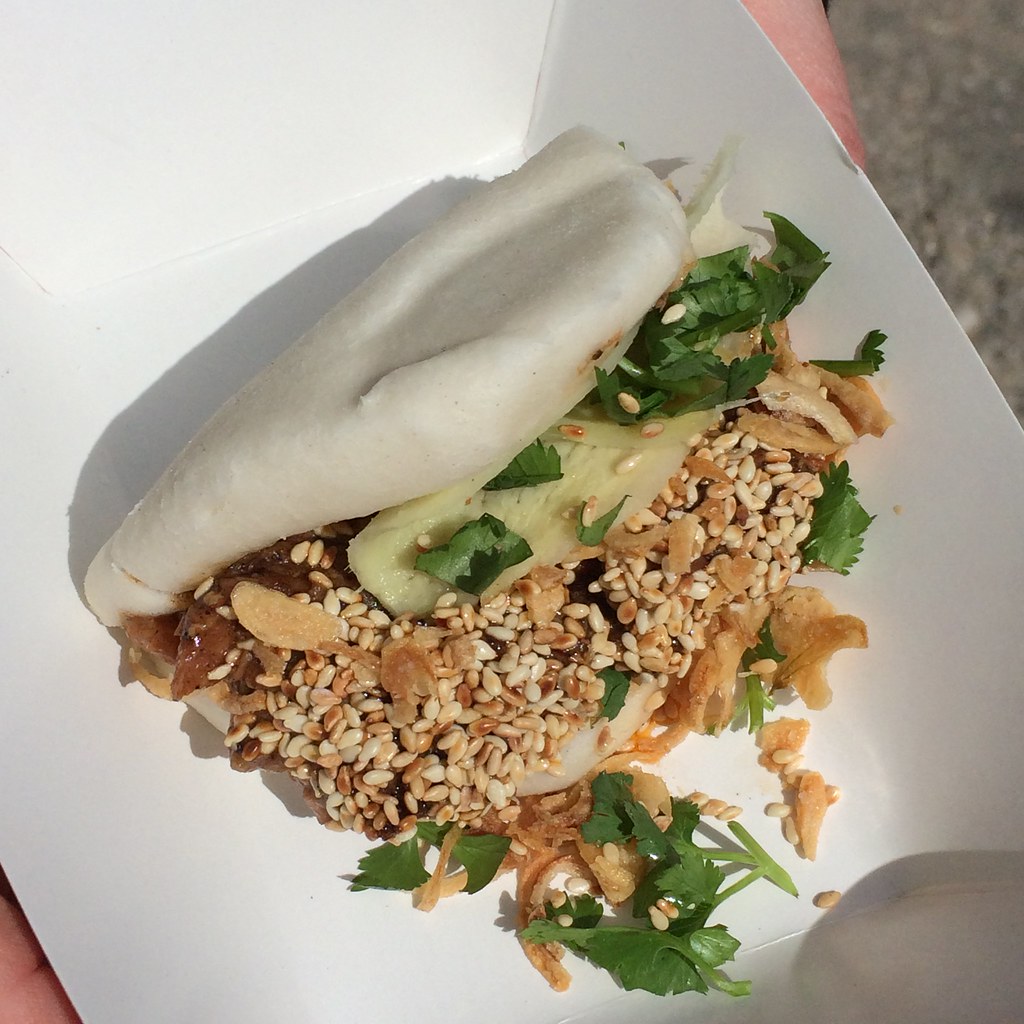 We enjoyed a duck bun from Bite Size Kitchen (above) and a hotdog topped with mango relish, cucumber, peanuts, cilantro, and fish sauce from Asiadog.

For a late lunch, we tried Rabbithole. The staff was so friendly there - the host exclaimed, I want to go to Maine! after he asked where we were from. We enjoyed a BLT with avocado and an eggs benedict florentine in a sunny window overlooking their sweet patio area. 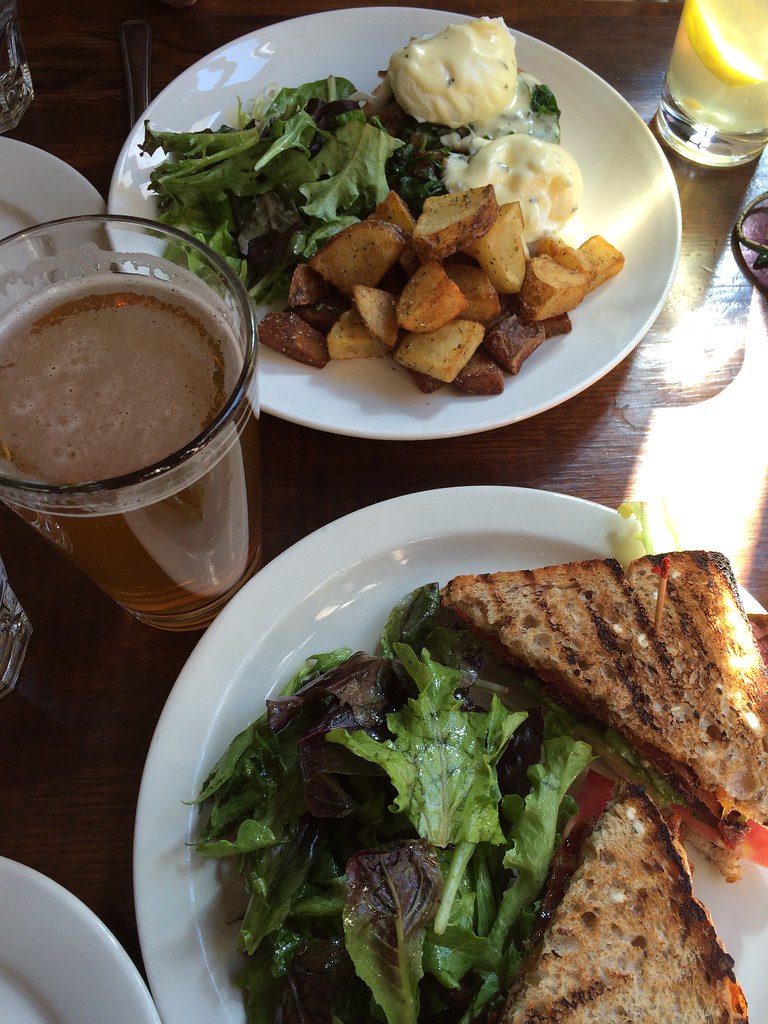 Later in the afternoon, we went to Greenpoint to Keg & Lantern, where my college friend is the brewer. We tried a variety of styles in a flight: a Scottish ale, a wild American white ale, a coconut porter, and a rye IPA on cask. 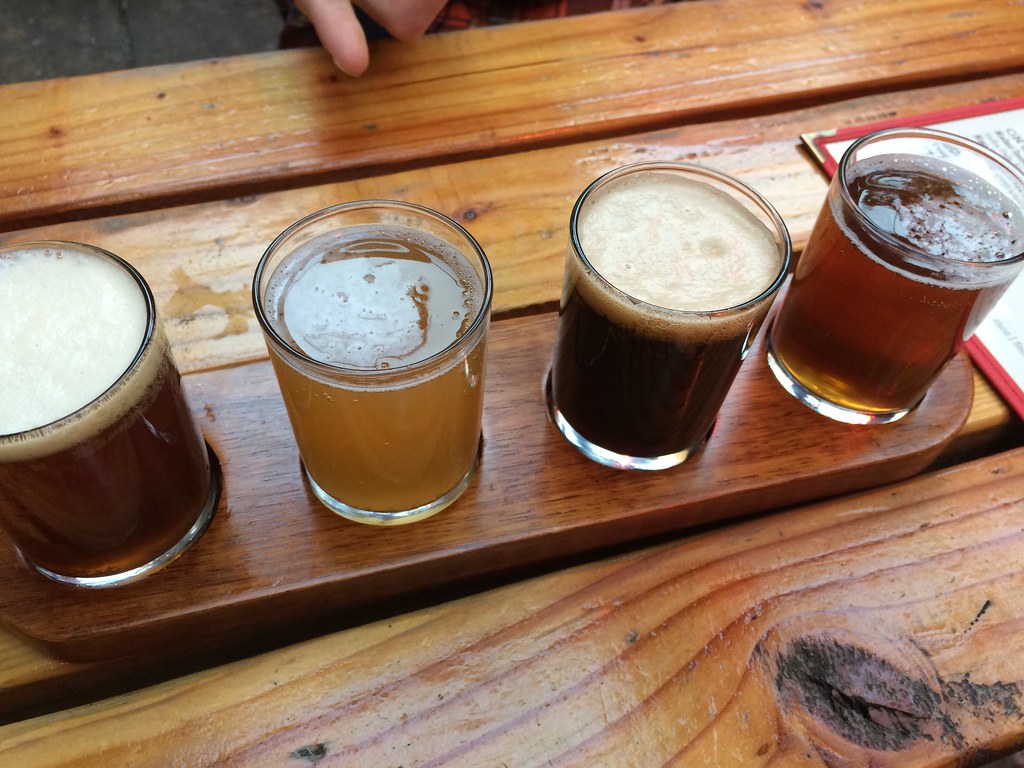 PJ showed us around the neighborhood a bit, taking us to Torst, the craft beer bar from the brewer of Evil Twin. I enjoyed an Other Half triple IPA in the chic bar - I didn't even know TIPAs existed! Of course I was in.

Next, we headed to Greenpoint Fish & Lobster, a really fabulous small seafood restaurant with a fresh fish counter in the front. Their menu is simple and the types of fish in each preparation change frequently. Of course, I got to engage in one of my favorite activities since moving to Maine: laughing at the price for a steamed lobster when out-of-state. Here? $29. Tee. 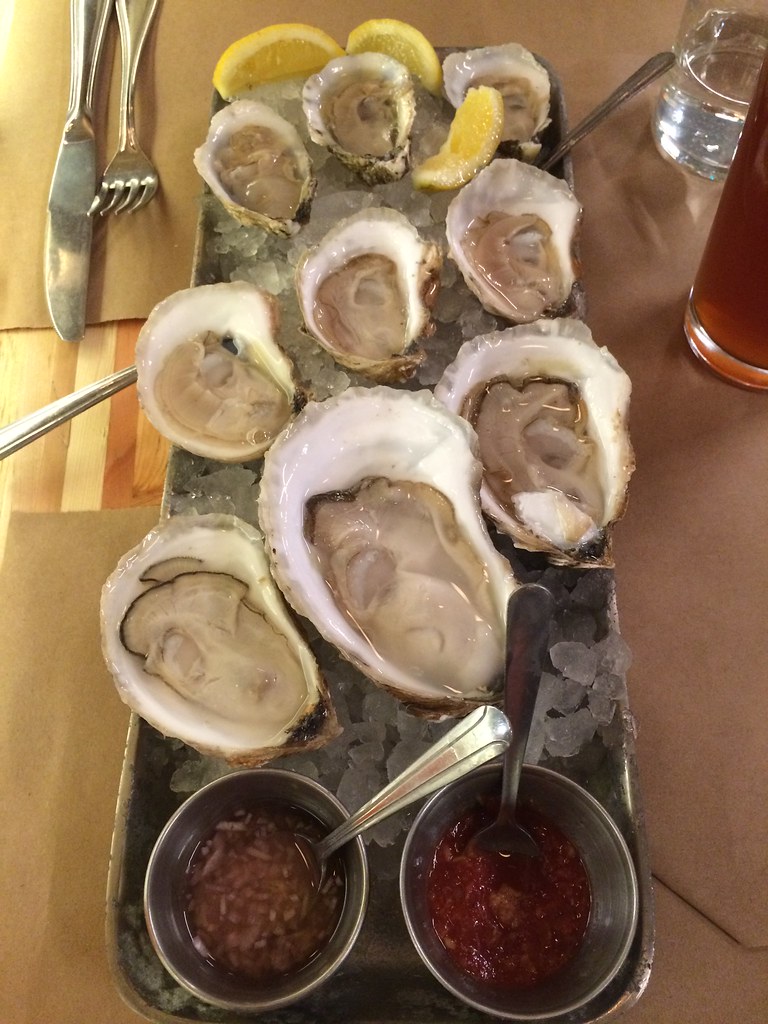 We enjoyed oysters from Mass, Maine, and Virginia before chowing on some delicious hake tacos. Then we said our goodbyes to my friend and headed back to Williamsburg - to Brooklyn Surf Bar, an adorable tiki-themed bar with sand on the floor (!!!).

The next day, however, the tiki drinks haunted me, so we headed to The Commodore, a dive yacht bar, for fried chicken on a biscuit. A little Ferris Bueller's Day Off and a mimosa and I was good to head to Red Hook for some distillery tours. 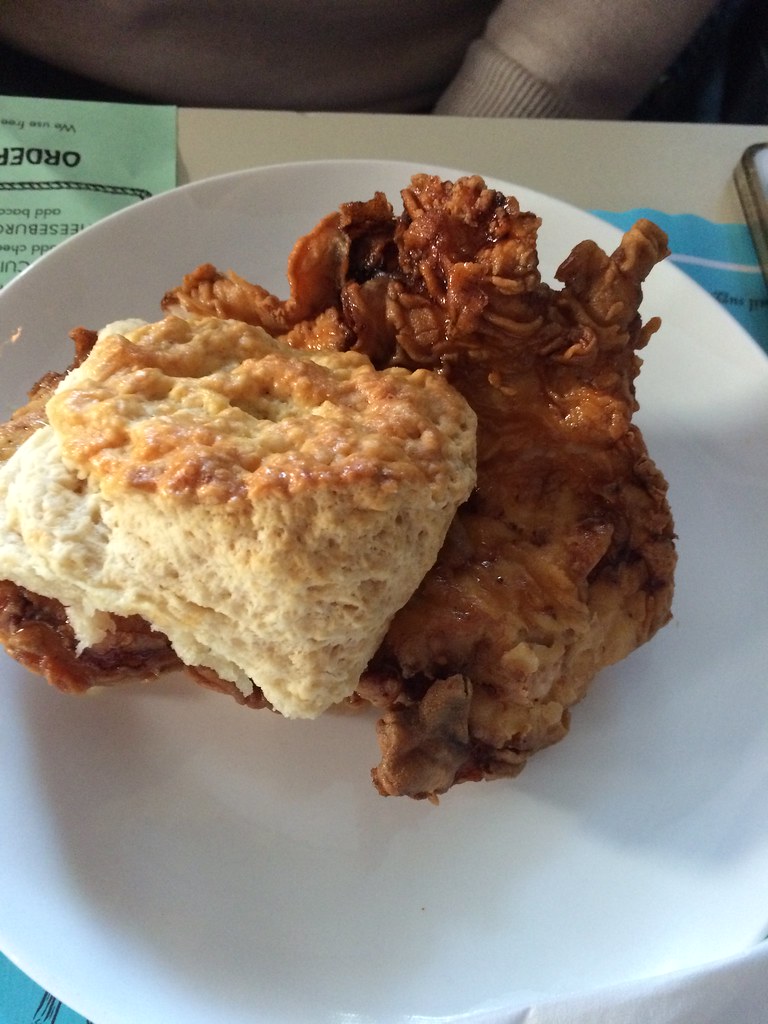 Red Hook is just the cutest little part of Brooklyn. There's no convenient train stop, so there's hardly anyone there (except for in the IKEA!). There's tons of industrial space that allows for distilleries, wineries, and food vendors, and then little artisan shops too.

We started at Van Brunt Stillhouse, where the nicest duo gave us a tour and a tasting of their whiskeys. They make cocktails in the distillery's tasting room, and in the summer, with the large windows open, I'd never leave. They'd have to make me an intern or something, since I'd be there all.the.time. We loved it. 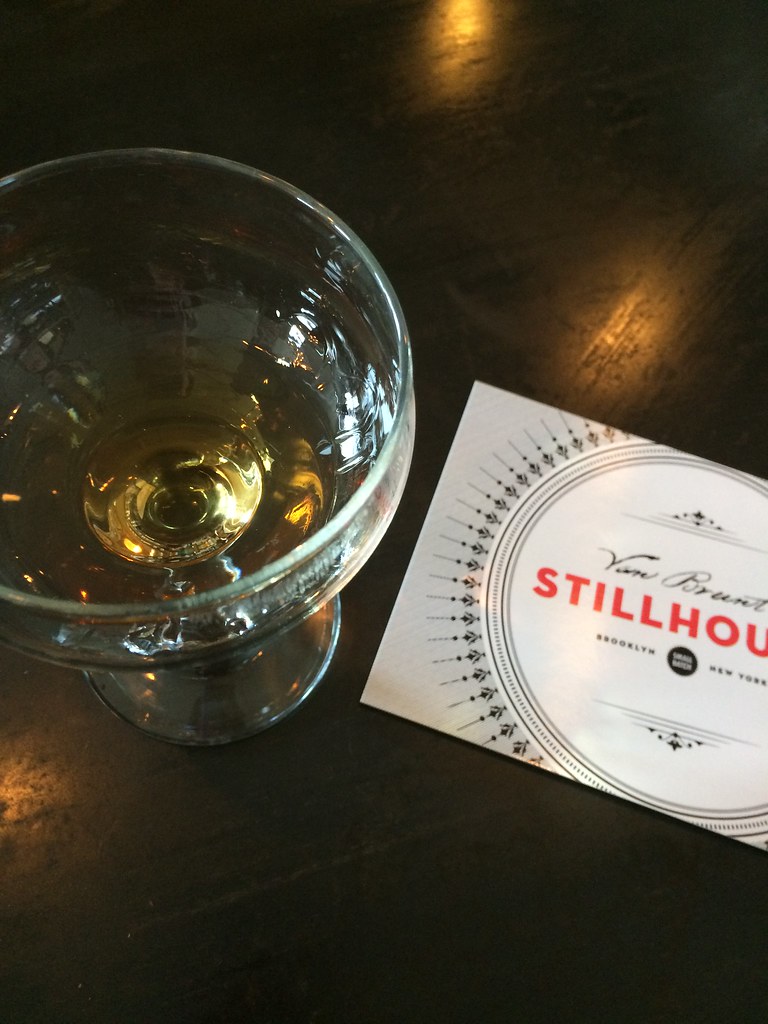 After tasting at Widow Jane distillery and a walk around the water, we were worn out, so we headed to Fort Defiance for a final snack. We shared a muffaletta, deviled eggs, and I enjoyed an extremely fluffy Ramos gin fizz.

After all that eating, drinking, and walking, I was ready to come home! Once again, I ate my way through Brooklyn, and returned to Portland with a fresh appreciation for why I love living here. 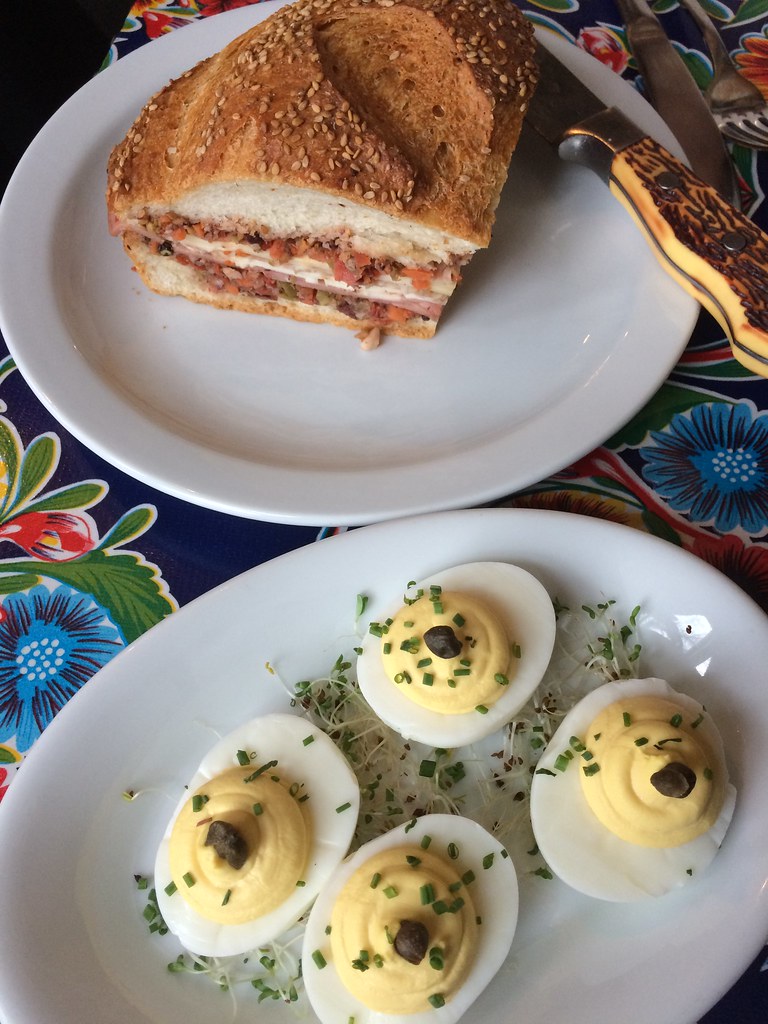