I visited my family in Northern Maryland for a week, and as usual, made it my mission to consume as much Chesapeake Bay blue crab as possible. I know Maine is known for its seafood, and while I have embraced our access to fresh fish, scallops, shrimp (sometimes, sniff), and lobster, none of it compares to backfin lump crabmeat. Absence makes the heart grow fonder and all that...

I started with inhaling a fried crab cake sandwich at Nick's Seafood in Baltimore's Cross St. Market, where we watched the Ravens game on a Sunday afternoon. I met a friend for happy hour at the An Poitin Stil in Timonium, and was so absorbed in catching up that I hastily ordered a wedge salad. When it arrived, I was delighted to see that it came covered in crab meat. The seafood was overwhelmed by the strong blue cheese and bacon flavors, but I was pleased by the principle of the thing. 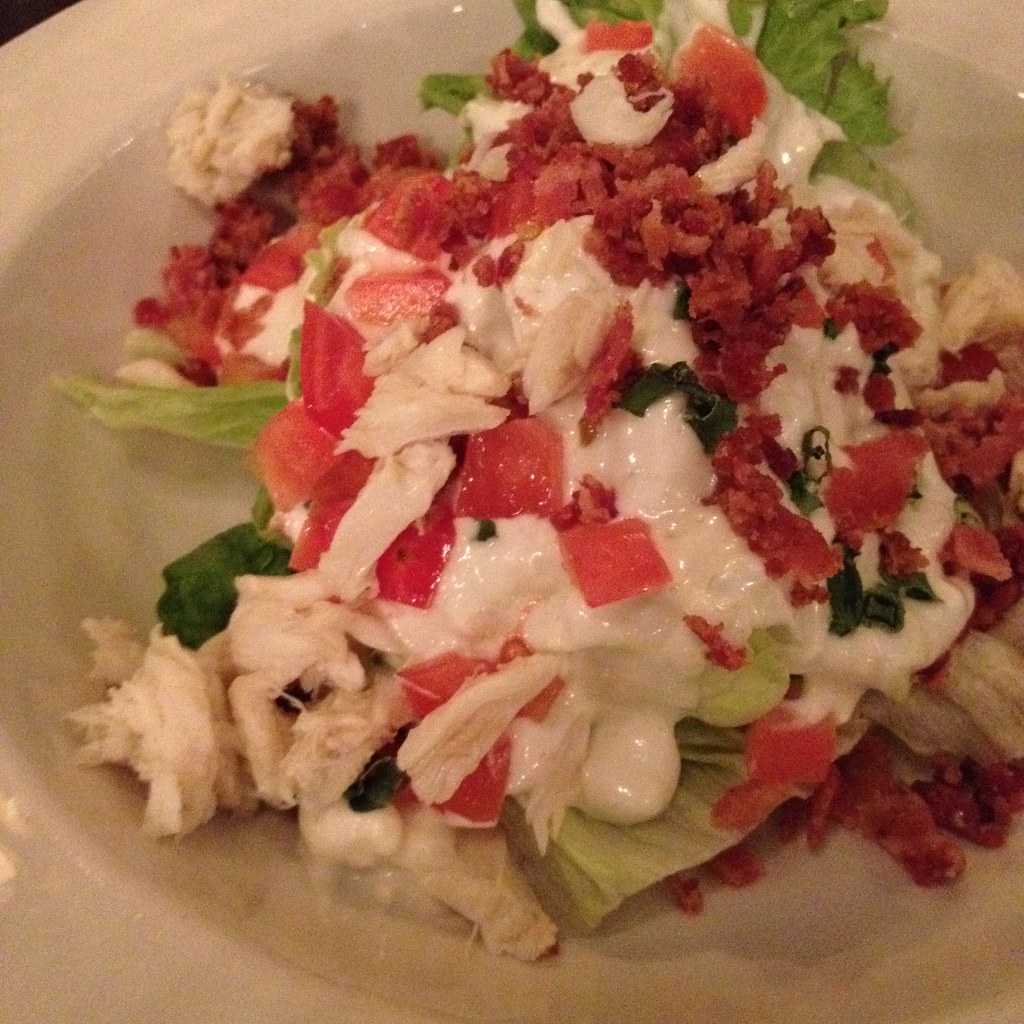 I love being in Ravens Country again, especially ogling the wall of gear at the grocery store (the things they they stick Ravens logos on never ceases to amaze me: Mr. Potato Head, hair scrunchies, serving trays, coasters, oy!).

My brother-in-law is a big Haloti Ngata fan, so my sister and I giggled as we snatched these Old Bay-coated cheesy poofs featuring Ngata on the bag for him. They were...strange, as the cheese powder fought for dominance over the Old Bay. 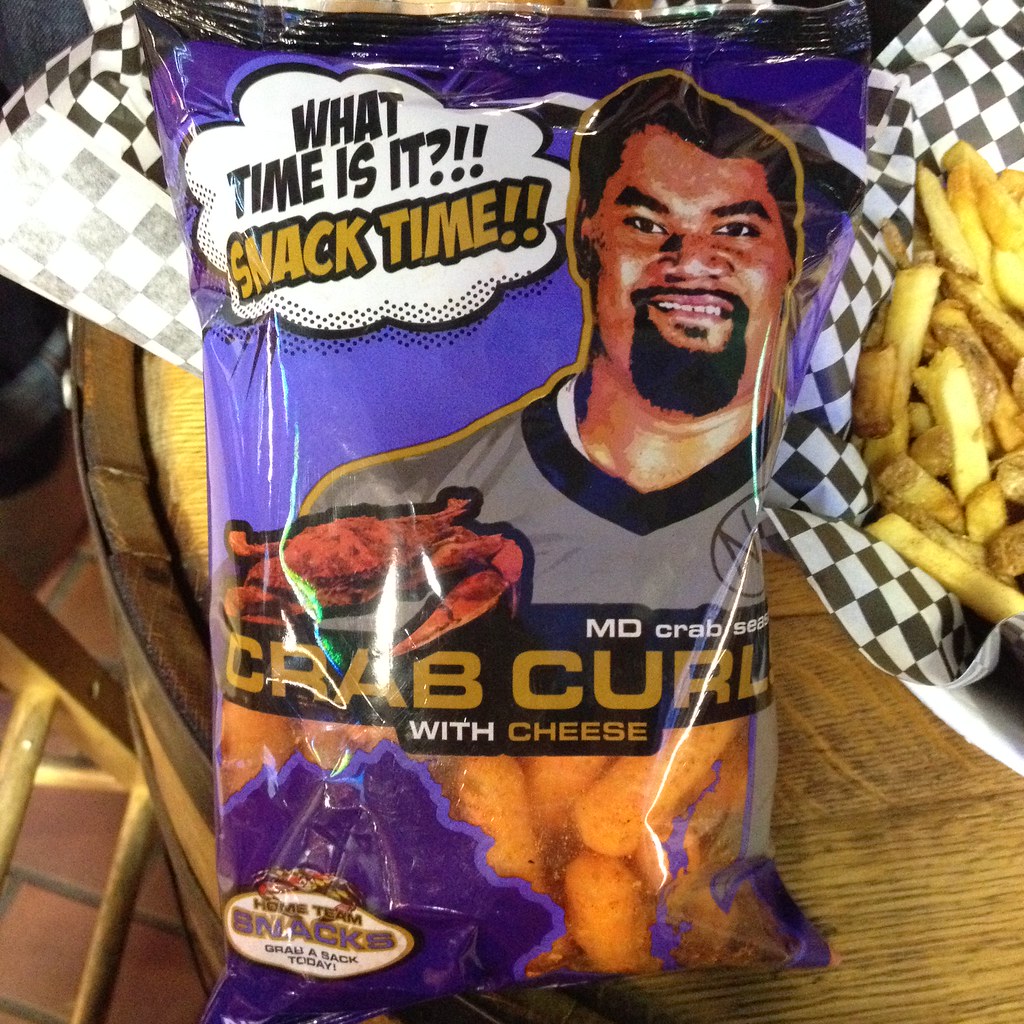 This commemorative bag of Utz crab chips, however...maybe I am a sucker for anything with a Ravens logo on it (yes, yes I am). These chips are spicy and salty, like a barbecue chip but without the sweet. You'll eat them until your tongue feels raw and then keep eating more. 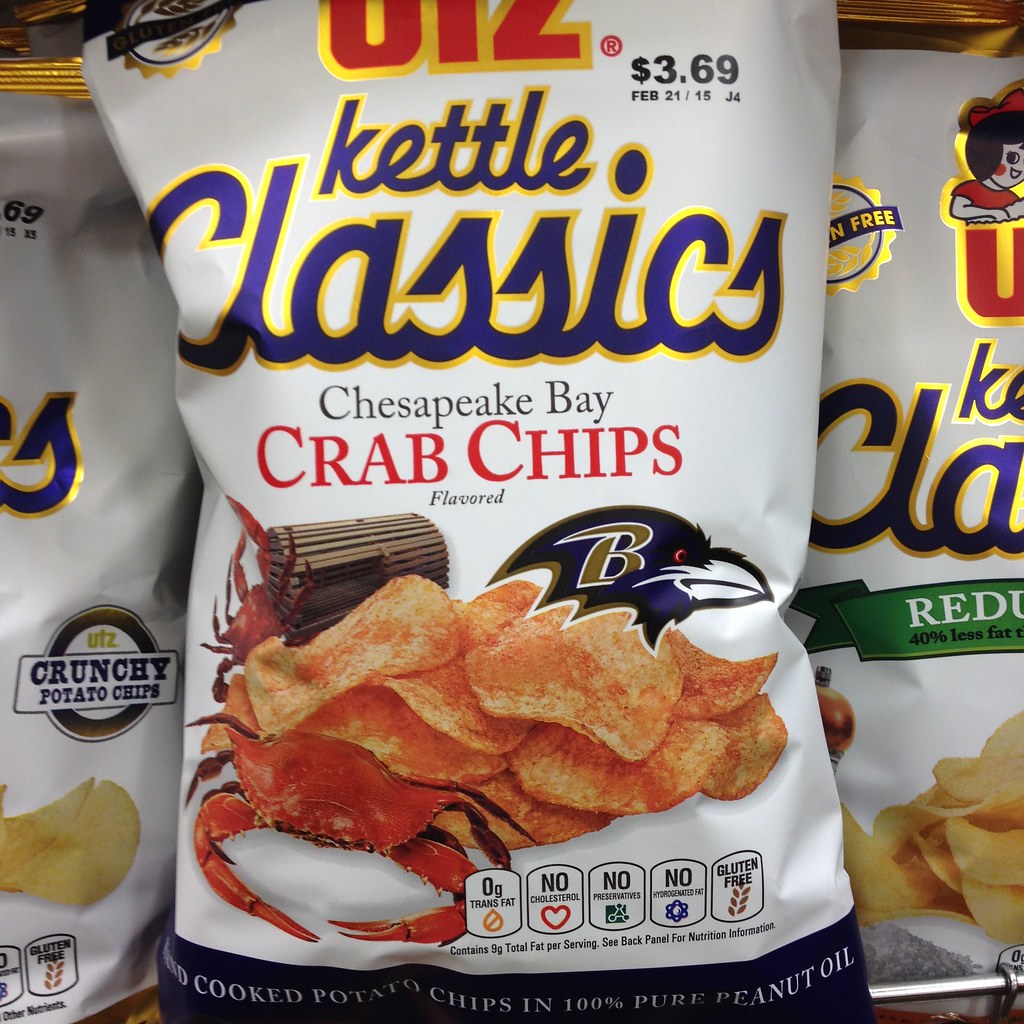 Before I left Portland for a week, I made sure to have a few holiday treats, as a refuge from all the holiday shopping and parties. I had lunch at Hella Good Tacos, where I ordered my usual taco plate with chorizo and fish tacos. The plate now comes with a cute little salad, which further adds some nice crunch and freshness to the meal. 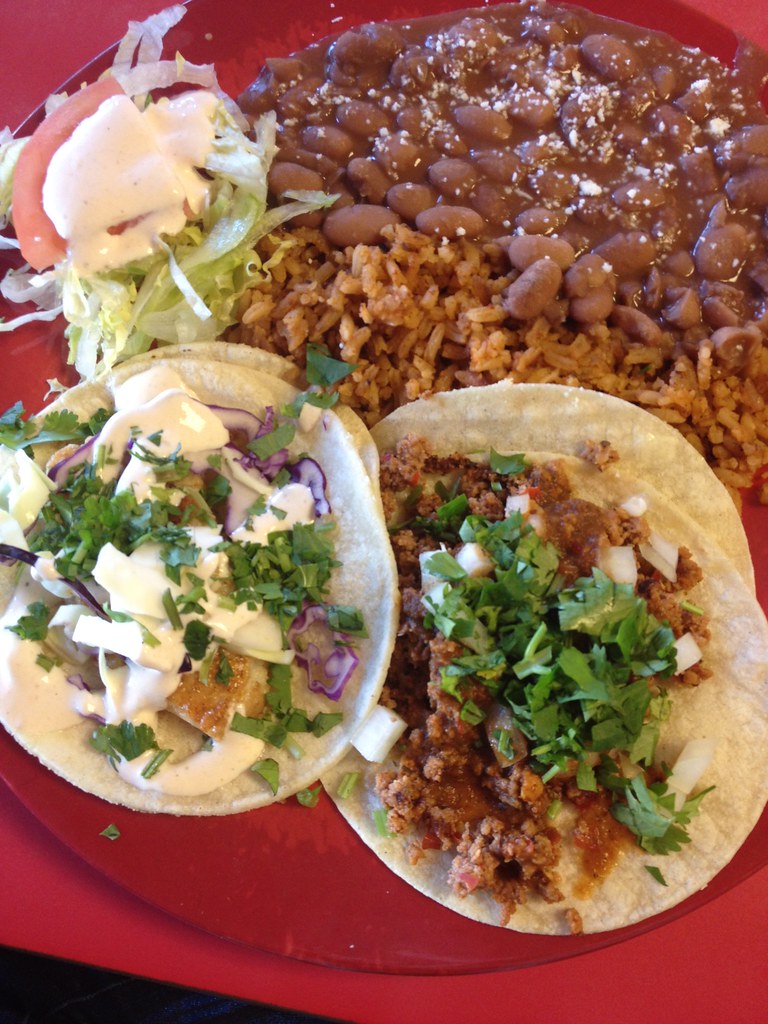 During some Old Port shopping, I learned my friend had never been into the soda bar Vena's Fizz House. Even though we had just come from lunch and hadn't even done much shopping, I pulled her into the shop to browse their barware selection and have a soda.

I loved this spiced pear mocktail, and I sucked it down, loving that I didn't have to fear it going to my head like it would if it were full strength. That said, owner Steve recommended adding rye whiskey for an adult version. As Vena's owners have applied for their liquor license, we may get to enjoy said version sometime soon. 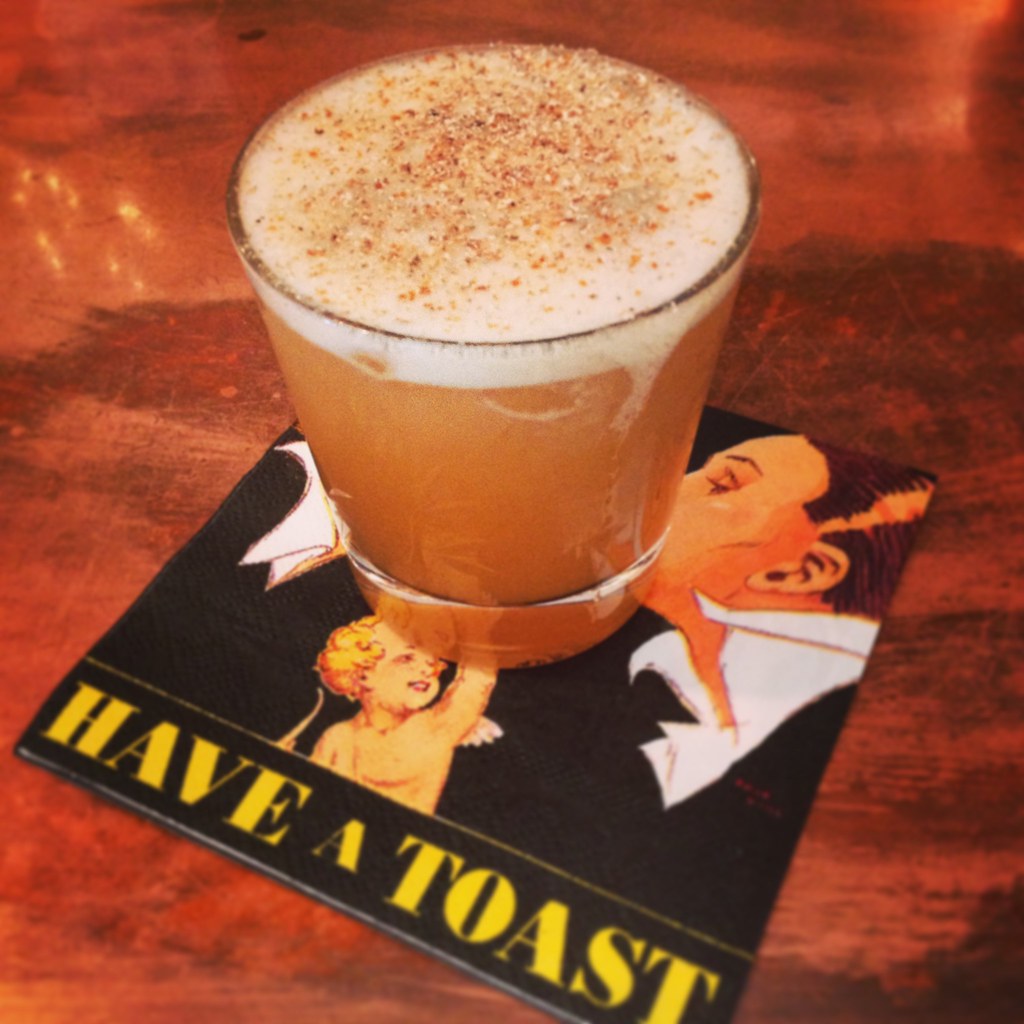 I also enjoyed cooking some new dishes at home, as well as some that are quickly becoming old favorites. One weeknight, I mentioned idly to Original Roomie A. that I'd never had shrimp and grits. She said, why don't we? So we trucked down to Whole Foods for shrimp, bacon, and grits.

We used this surprisingly simple Saveur recipe to make a Rachael Ray-style 30-minute meal. I think you could even make it healthy if you backed off on the butter/oil/bacon grease/cheese (but WHY). 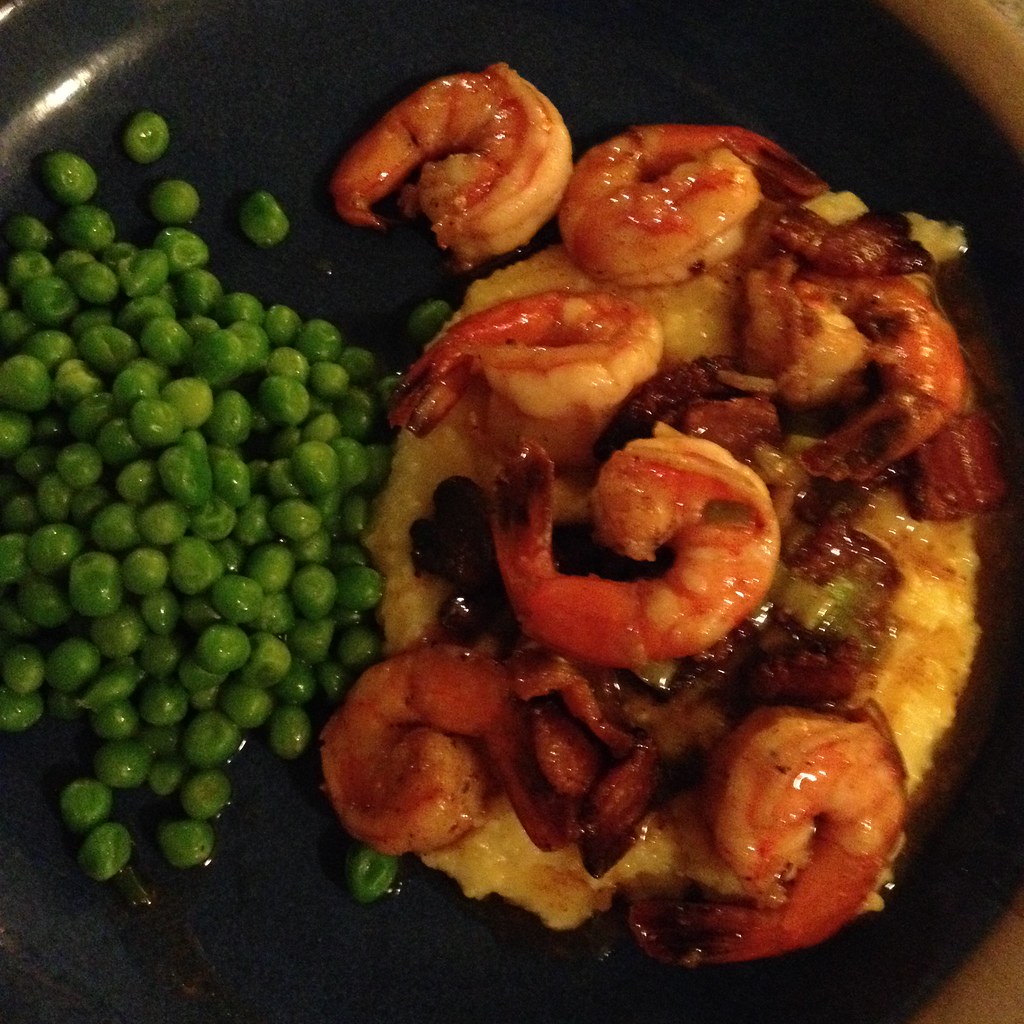 And on New Year's Eve, I hit on what may become my new tradition. I invited a few friends over and Original Roomie A. hosted us for a dinner party. We had pepper-crusted seared scallops, mushroom risotto, and a grapefruit, avocado, mustard salad that I have begun to crave (recipe below).

Save for the risotto, this meal wasn't too much work, but felt delightfully decadent (but yet balanced by the outstanding salad, which no one would see as an afterthought). 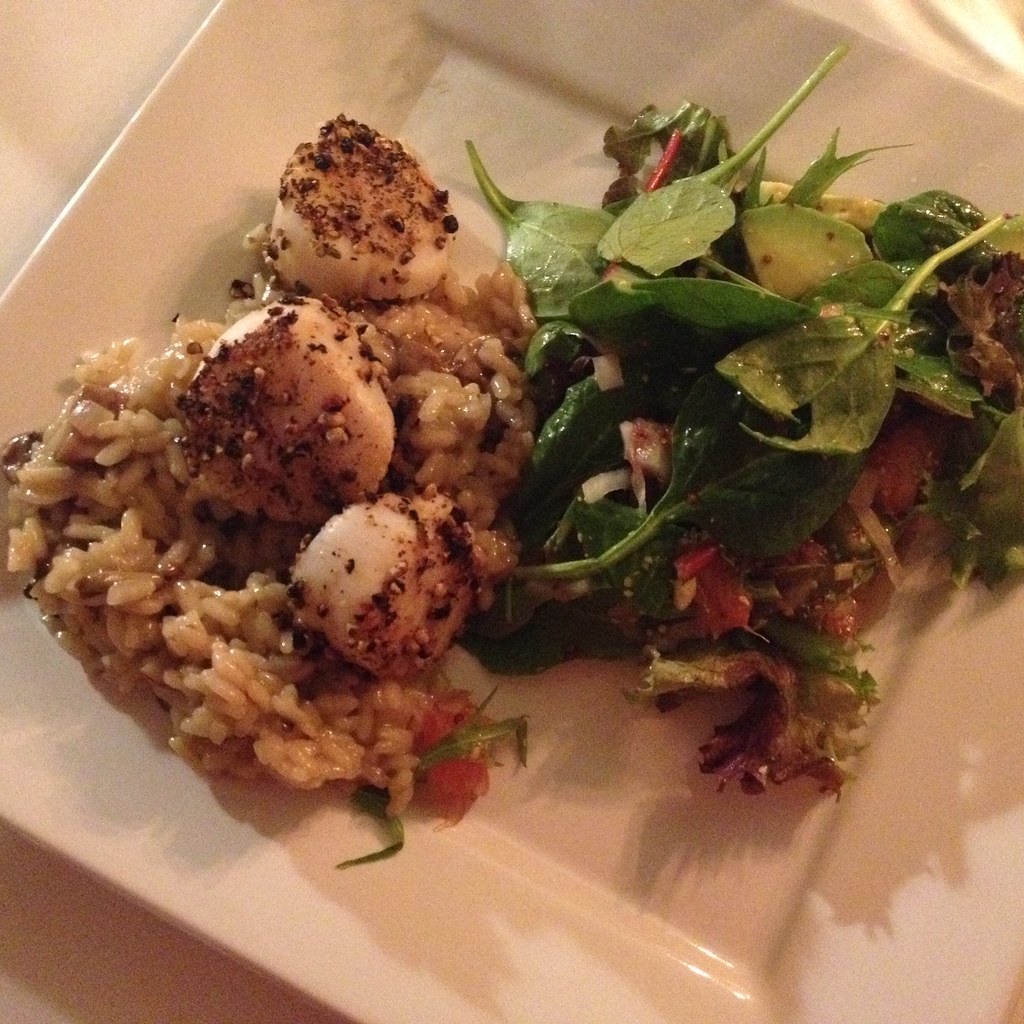 I hope your holidays were enjoyable and that you are relishing the relatively quiet pace of January...as well as playoff football. On that note, Go Ravens!

Finely chop one shallot and add to the bottom of a large salad bowl. Add a big spoonful (about 2 tablespoons) of Dijon mustard. Supreme a grapefruit over the salad bowl, letting the grapefruit segments and juice fall into the bowl. Toss ingredients in salad bowl to make dressing. Add a little olive oil if desired.