Last Wednesday, I daytripped down to York, Maine and had a delightful peek into the spirited life and business of the Woods family. Dave, his son David, and daughter-in-law Amanda run Wiggly Bridge Distillery on the main strip in York. The town was quiet when we arrived, all shuttered for winter, although the faint smell of popcorn still wafted on the cold air. Woods later remarked that you could "fall asleep in the middle of the street," this time of year.

Wiggly Bridge Distillery is in a small storefront on Railroad Ave. in York, otherwise surrounded by a hair salon, t-shirt, taffy, and popcorn shops. The Woodses have been making and selling their spirits from their storefront since July, with a homemade still and self-taught knowledge on making bourbon, whiskey, and rum. 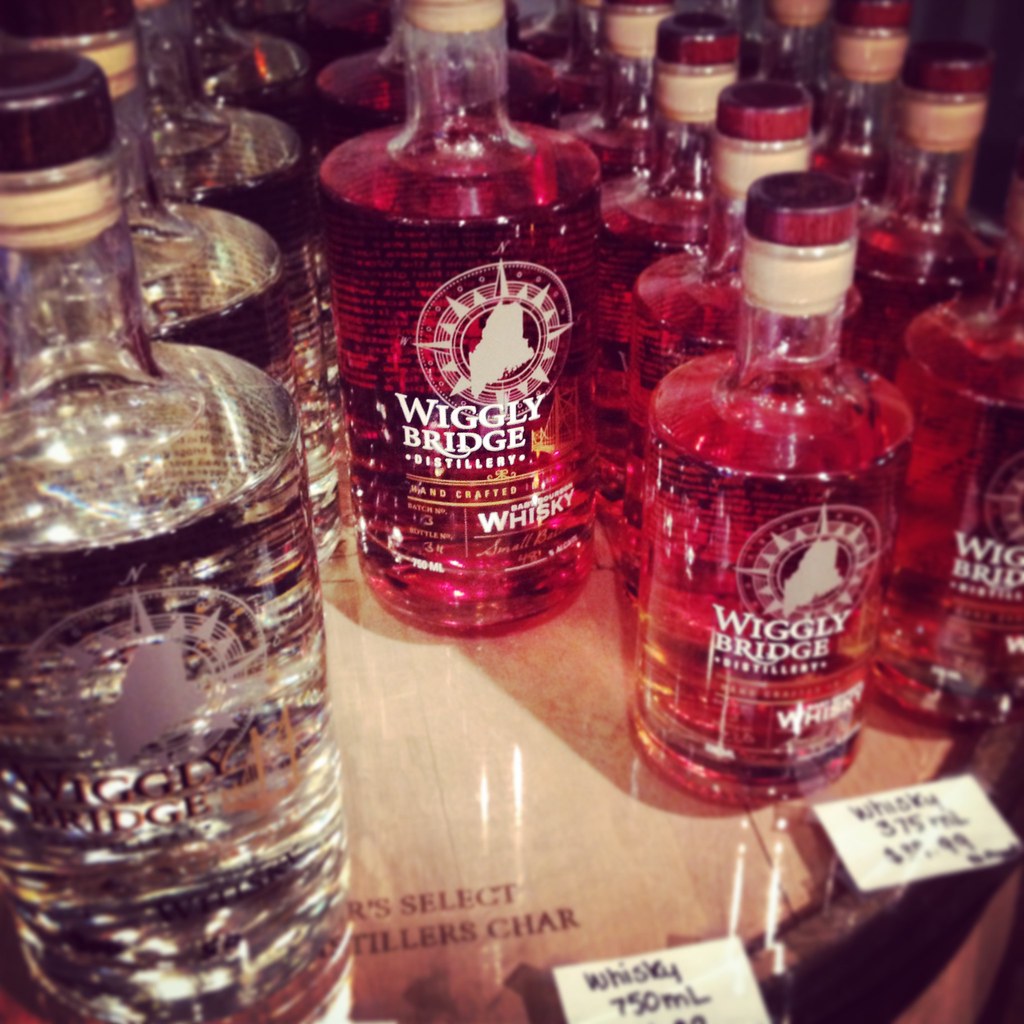 David and Dave make two whiskeys currently: a white (or unaged) whiskey and "Baby Bourbon" whiskey, aged 10 months. Other whiskeys have been tucked into charred oak barrels and are currently aging, some to be opened as soon as January 2015, others at least not until 2016. There's two rums as well, a white rum and an aged rum, with an extra-aged rum almost ready for bottling.

We plunked down on some bags of grain and chatted with the Woods family about their arduous work of opening a distillery on the main street of a town that banned state-owned agency liquor stores in the late 80s. Woods now operates under a craft distilling license, allowing him to produce a certain number of gallons annually and sell them out of his retail shop that also stocks plenty of Wiggly Bridge Distillery swag.

Owning several service-based businesses, like car washes, a campground and a salon, Dave found himself for the first time producing stuff, something to stock on shelves and sell. But his background designing and modifying car wash equipment gave him an advantage when he decided to build his own copper still (while on vacation in Montserrat, naturally - why not take advantage of the local knowledge of Caribbean rum?).

I was particularly impressed by the sheer amount of perseverance Dave displayed in his pursuit of opening the distillery, from slogging through federal code books 5 inches thick to installing new sprinkler systems to bring his storefront up to code to honing his skills to create quality spirits.

Before we left, we had to sample the stuff, of course. We tried the 2 whiskeys and 2 rums currently for sale, as well as a preview of the barrel-aged rum that will be ready next year. Unaged spirits are a bit hard for me to drink on their own, but I could see that the corn whiskey would add a unique taste to cocktails; Dave recommends it in a Bloody Mary in place of vodka.

The Baby Bourbon was my favorite, and a bottle came home with me for the holiday the next day ($39.99 for a 350ml bottle). At only 10 months old, it's remarkably smooth, with a great balance of warm flavors like cinnamon, but some remaining spiciness from the rye mash. Before we left, Dave mixed us up a sample of a Marmalade Manhattan, recipe below. I typically do not go-to Manhattans, as I find them to be too boozy and too sweet. Serving this one over ice, as opposed to neat, still gives nice citrus and spice flavors, but results in a drink that is much less "stiff" that the traditional one.

Wiggly Bridge's products are slowly making their way into Portland bars, but can be found at the distillery, 19 Railroad Ave. York, from 12-7PM, Thurs-Sun.