I never thought myself to be the kind of person who waits in line for beer. I scoffed at the people who, during the last Maine Beer Company Dinner (a double IPA) release, began forming a line in front of the brewery at 7AM. My eyes bugged out when the Bier Cellar guy told me that people waited in line for 45 minutes in the store to buy the previous delivery of Bissell Brothers' Substance cans.

I've never been too much of a beer nerd - I drink what's readily available in Portland's beer stores and will at times venture out to Allagash Brewing Company when I hear they have an especially intriguing bottle release. I've never crossed state lines just for a beer or made arrangements to trade beers with someone in another state. I know when I'm out beer nerd-ed, but can usually keep up through the beginning of the conversation.

But somehow, I found myself waiting in this line for Maine Beer Co.'s Dinner yesterday. I ended up waiting 2-1/2 hours to buy beer. 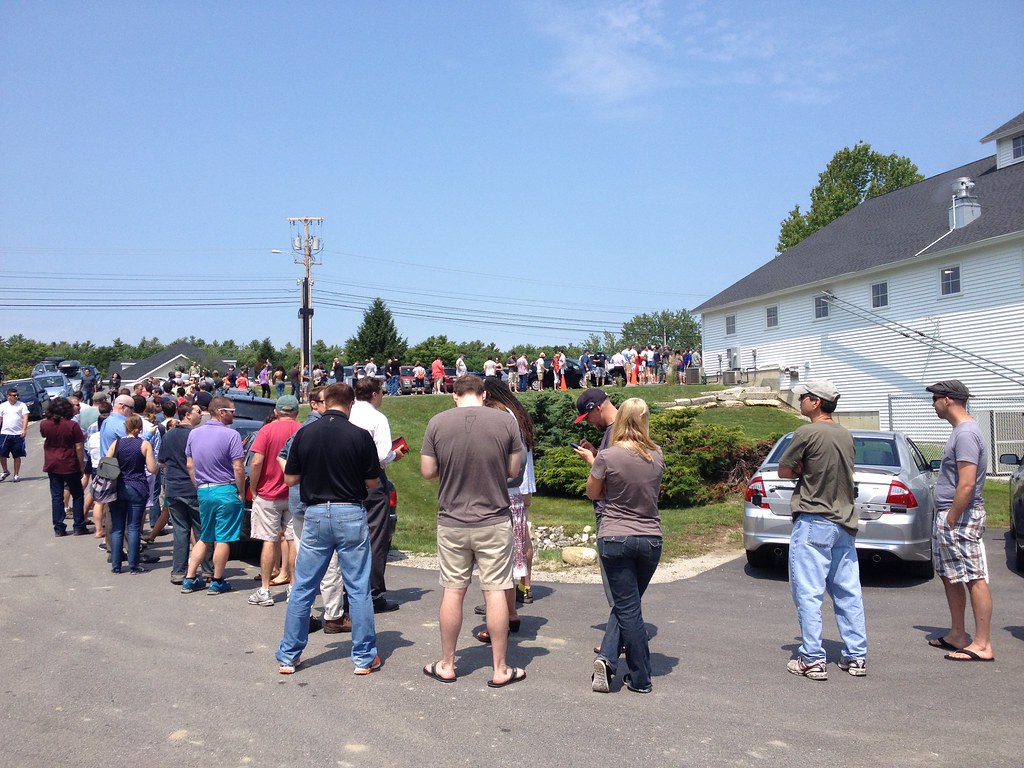 The last time Dinner was released, I casually drove up to Freeport the day of the release at 3PM. I walked into the tasting room, selected two bottles from the cooler and went to check out (after sampling a small pour, obviously). The counter guy told me there'd been a bit of a line for the 12PM opening of the brewery, over which we both expressed amazement. After tasting the Dinner, I understood why there was a bit of line, but I was happy to have my 2 bottles sans wait.

This time around though, with Sierra Nevada's Beer Camp festival happening tonight, there are many more beer fans in town. And the first release of Dinner generated a considerable buzz, with many esteemed beer minds saying it rivals Alchemist's Heady Topper (I tried Heady Topper last week and I like Dinner better, so there). 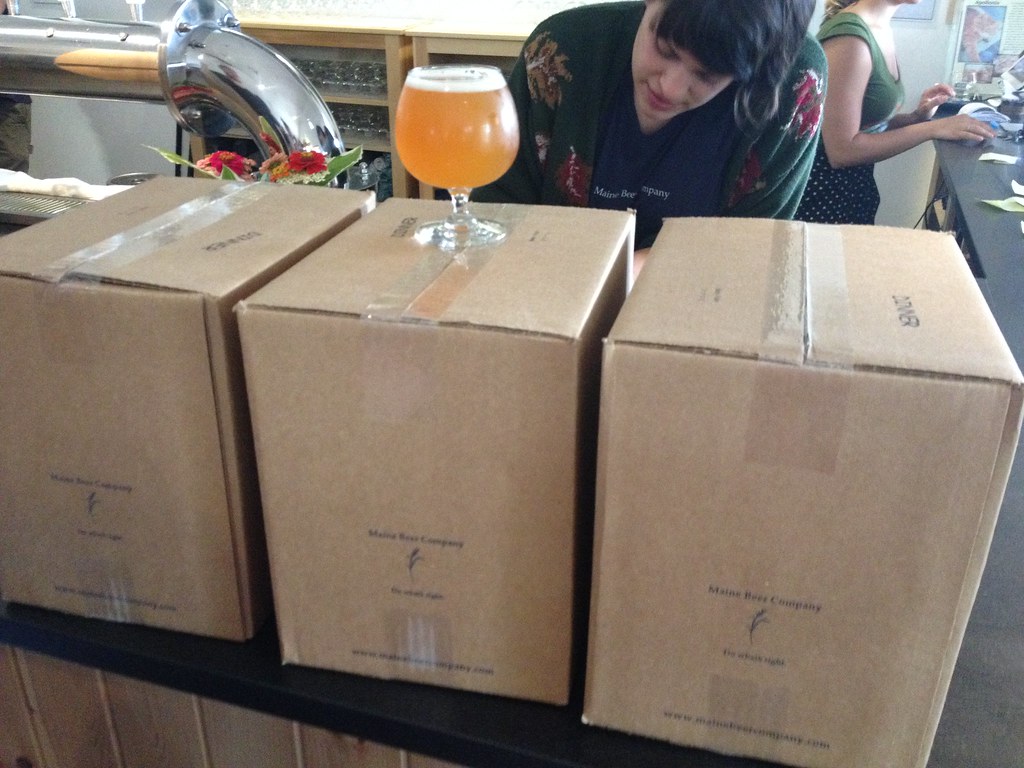 Fortunately, the weather was nice and the crowd was amiable. Of course, after waiting in line for 2 hours next to the same people who are also willing to wait that long for beer, conversation comes easily.

I just made the cut off into the brewery; even with a 2 case per person limit, the beer sold out before everyone in line could purchase some. I was thrilled to taste Dinner again - crisp and hoppy with a fruit and slightly bitter finish. A Double IPA done right for me - not too heavy or bitter at the end.

And speaking of things that pay off after a long wait, I started a bucket of fermented dill pickles. I was inspired by Laura McCandlish's article in Sunday's Press Herald Source section. I simply washed my garden cucumbers, mixed up a saltwater brine, layered the spices (dill seed heads, garlic, mustard seed, bay leaves, crushed red pepper flakes) in the bottom of the bucket, and then added the cukes and the brine. I weighed down the floating cukes with the lid from a pot - especially nice, because it's clear and I can keep an eye on the progress of the cukes without disturbing them. 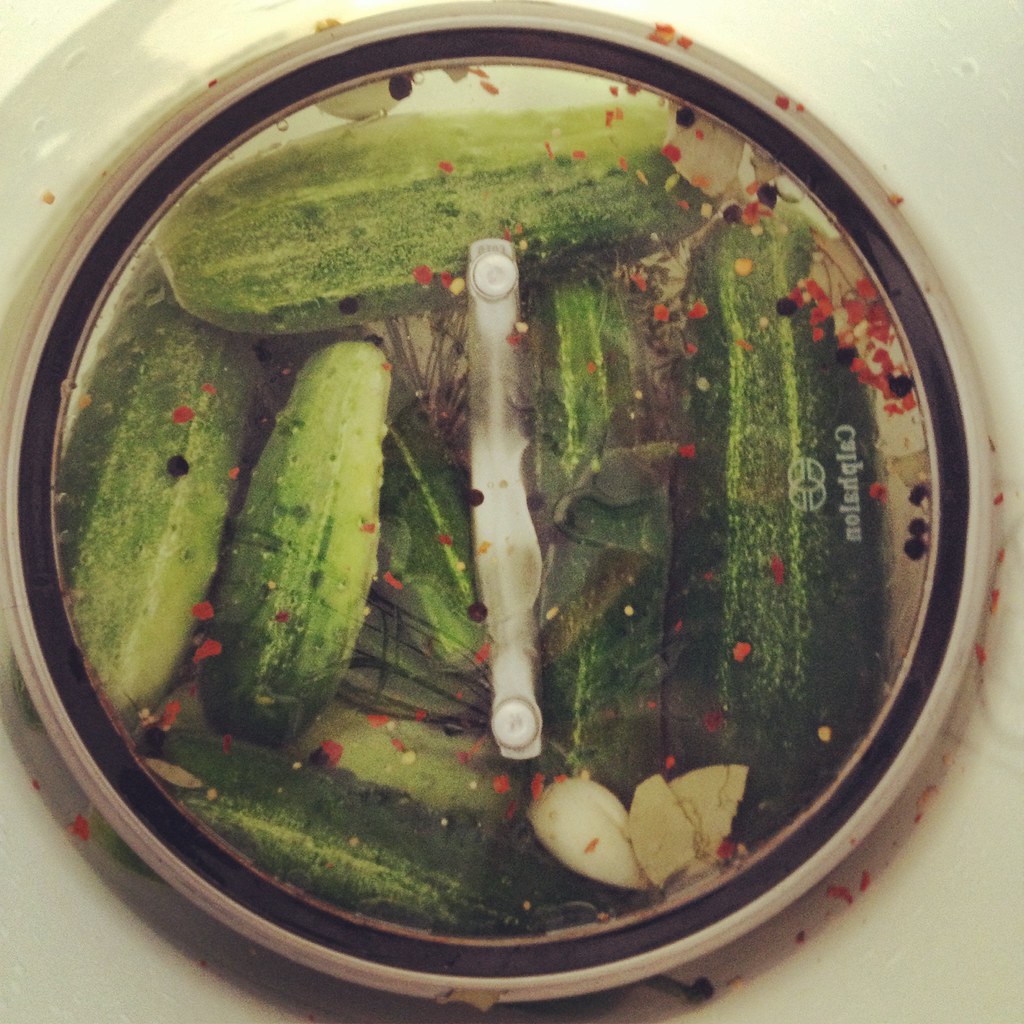 A few notes on fermenting pickles: