Get out and dine

Originally published in the Portland Phoenix on June 19, 2014

Summer in Maine brings a long-awaited flurry of activity. While it’s tempting to recoil into a “locals only” routine to avoid the crowds, dining in Portland is at its finest when it’s warm out. Be strategic about your opportunities for great food within this short season of relative abundance. Here are 10 must-eats for Summer 2014. 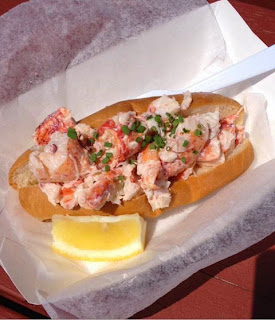 1) Bite Into Maine’s lobster roll
While Cape Elizabeth’s Fort Williams is in the eye of the tourist storm, the green space and endless expanse of ocean will keep you from feeling claustrophobic while you wait for your lunch. Gorgeous scenery or no, Bite Into Maine’s lobster roll cart alone is worth the drive. Choose from five preparations of fresh, never frozen (a feat more rare than you might think), Maine lobster: 4.5 ounces of tail and claw meat, all served on fresh-baked, buttered, toasted buns. Try the picnic-style roll, lobster meat tossed with melted butter, a layer of coleslaw, and sprinkled with celery seed. Think of it as research for your vote in Roll Call’s Taste of America competition, where Maine’s lobster roll has made it to the final round (vote at rollcalltasteofamerica.com). | biteintomaine.com

2) Maine Pie Line’s blueberry pie
This Maine staple can be surprisingly hard to find in a state that produces 99 percent of the country’s wild blueberries. Maine Pie Line’s Briana Warner consistently creates atypical pie fillings (like peaches poached in sage and wine and baked in almond pastry cream). Rather than just ho-hum blueberry, Warner adds warming spices cardamom and ginger to the fruit filling and covers it with a sugar-topped lattice crust. Maine Pie Line is open Wednesday–Friday, 10 am-3 pm, and Saturday from 9 am-1 pm at 200 Anderson Street in East Bayside. | mainepieline.com 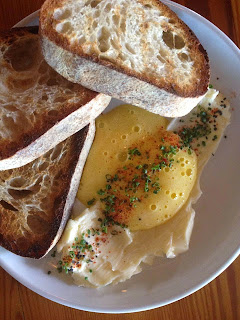 3) Central Provisions’ bread and butter
Since its opening in February, Central Provisions has blended seamlessly into Portland’s elite restaurant scene. One menu staple, the bread and butter, elevates the pre-meal snack into an appetizer worthy of its own stage. Slices of grilled sourdough bread come with a heat-tempered duck egg yolk that’s been whipped and piped onto a smear of salted butter. Heavenly. | central-provisions.com

4) A meal from the farmers’ market
The Portland Farmers’ Market is the premier spot to find fresh, local food this summer. Fresh tomatoes, sweet corn, herbed goat cheese: these ingredients don’t need much to rival any Old Port restaurant meal. Meat-lovers should visit Thirty Acre Farm for pork bratwurst for the grill; everyone will love Lalibela Farm’s black bean tempeh strips, pan-fried in tacos or a salad. | portlandfarmersmarket.org

5) Small Axe food truck
We wouldn’t dare to venture a guess as to whether Congress Square Park just needed a little love to become a viable public space again or if the uptick in visitors is due to the popularity of Small Axe truck alone. Either way, enjoy the fried haddock sandwich or pork belly fried rice from these friendly chefs for lunch and dinner on weekdays. There’s new seating in the park, free Wi-Fi and, of course, great people watching. | smallaxetruck.com 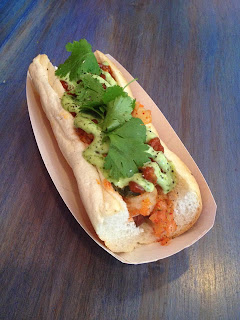 6) Blue Rooster Food Co.’s chef hot dog series
Your favorite handheld treat gets a gourmet makeover this summer at The Rooster. Every week until the end of August, a guest chef hot dog is being served; the series started with Cara Stadler of Tao Yuan’s bacon-wrapped dog, topped with kimchi, ssam sauce, and cilantro mayo. This week, Steve Corry’s ‘555 Dog’ will be served until Thursday, with a portion of the proceeds going to benefit Good Shepherd food bank. | blueroosterfoodcompany.com

7) The Well at Jordan’s Farm
The word is out about this idyllic restaurant at Jordan’s Farm in Cape Elizabeth. Former Back Bay Grill chef Jason Williams prepares Jordan’s Farm produce and locally-raised meats in his gazebo restaurant. But remember, it’s a working farm; last summer, farmer Carol Anne Jordan found visiting picnickers spread out on her farmhouse’s lawn like they were in some Maine version of Disneyland. Bring your manners and a bottle of wine (it’s BYOB) for an al fresco dinner. Open Wednesday-Saturday at 5pm. Reservations accepted for groups of 6 or more; cash only. | jordansfarm.wix.com/thewell

8) Hella Good Tacos at Steve and Renee’s Diner
Namesake Renee recently sold her Washington Avenue diner to Josh Bankhead, who had been renting kitchen prep space for his taco cart. The diner is slowly transforming into a Mexican restaurant, with a new salsa bar for topping your chorizo tacos, carnitas burrito, or freshly-fried tortilla chips. Hella Good Tacos’ cart can still be found in Monument Square, Wednesday-Friday at lunchtime. See Facebook for the diner’s expanded hours; now serving beer. | facebook.com/hellagoodtacos 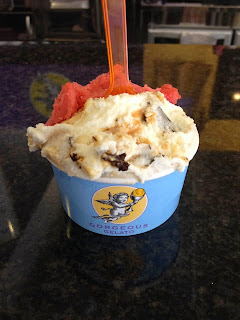 9) Gorgeous Gelato
No matter your flavor preference, whether you like fruity, chocolate-y or sweet and creamy, the gelato turned out by the Italian owners of Gorgeous Gelato is likely to be the best version you’ve had. Fruit sorbets taste fresher than if you ate berries off the bush; the ‘Gorgeous’ flavor (sweet cream with chocolate chip and caramel swirls) has an impossibly smooth texture. If you’re concerned about such things, know that gelato has 70 percent less fat than ice cream. | gorgeousgelato.com