Originally published in the Portland Phoenix on June 19, 2014 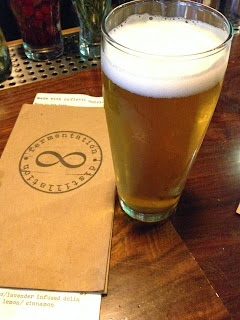 The old joke goes, if you want to know what’s going to be popular in Portland in five years, look at what’s happening right now in New York. But what’s closer to the truth is that Portland has been forming — dare we say setting — its own trends all along. Sure, gimmicky things happening here, like putting bacon in a Bloody Mary, were probably done in some Brooklyn bar years ago. But serving farm fresh, local food has always been popular in Maine.

Two trends in particular can be seen playing out in our high-caliber food and drink scene: one unique to our area and one that’s also popular elsewhere, but particularly well suited to our coastal climate. Look to new and long-standing popular Portland restaurants to see these trends continue this summer.

Portland chefs report the degree of camaraderie and collaboration they experience in their industry is unique. In the ultimate partnership, two restaurant professionals are opening the most-anticipated restaurant in Portland since Hunt + Alpine Club. The culinary pedigree of the owners has helped to create the hype; Jason Loring, owner of Nosh Kitchen Bar, and Stephen Lanzalotta, former Micucci’s baker, are partnering to open Slab Sicilian Street Food.

The menu at Slab naturally focuses on slab-style pizzas, and the beer list features 20 taps, many of them local. A 70-seat beer garden makes the location in the former Public Market House once again a destination for food and drink. Seven local breweries have brewed beers inspired by Slab’s menu: Rising Tide, In’finiti, Gneiss, Banded Horn, Bissell Brothers, Foundation, and Bunker Brewing.

Rising Tide is now pouring their Coslaboration in their tasting room. It’s a wheat ale, brewed with fried sage and fresh oranges, inspired by the hummus served at Slab. Only the aroma of sage is detectable, while the oranges contribute to the crispness of the beer. It’s perfect for drinking on Slab’s patio. In’finiti’s El White Camino is an easy-drinking corn lager and is now available at In’Finiti. Look for these collaborative brewing efforts at Slab (25 Preble St.; facebook.com/slabportland), opening any day now.

The use of foraged foods in Portland restaurants is slowly becoming more mainstream. At the newly opened Lolita on Munjoy Hill, from the owners of the former Bar Lola, find a dandelion green and nettle salad. The bitter, wild greens are dressed with a garlic almond puree and slices of speck, or cured pork. Nettles are the plants responsible for the stinging feeling on your calves as you hike through a field; their leaves contain formic acid, a skin irritant. Fortunately for Lolita’s diners, the effect is neutralized when the leaves are cooked.

Newcomer Vinland’s all-local menu features many foraged items. While spring’s fiddleheads and ramps are slowly fading, wild lamb’s quarter and oyster mushrooms are taking their places. Perennial favorite Eventide Oyster Co. uses foraged seaweed to flavor their soup stocks and as a garnish on their exquisitely prepared seafood dishes. If you want to add the flavor of the sea to your home cooking, Vitamin Sea, a value-added seaweed company in Scarborough, makes agricultural products, pet treats, and snacks from Maine seaweed. The Wild Weeds savory topping is an addictive mix of dried, roasted seaweed, soy sauce, and sesame seeds. It can be found at the Portland Farmers’ Market.

The beautiful thing about foraged foods is their accessibility. If you’re interesting in learning how to find the right wild edibles, consider attending the inaugural Maine Seaweed Fest, August 30 at Southern Maine Community College. Guided beach walks led by “Coastal Carol” of Coast Encounters will educate you on how to safely harvest nutritious sea greens. Local vendors will be preparing food that will expose you to the versatility of seaweed.

Considering that the Maine seaweed harvest last year was 17 millions pounds — worth almost half a million dollars — it’s about time this humble plant has it’s own festival. Turns out Maine was way into seaweed before it was cool.