Yesterday, I took a cheesemaking class at the University of Maine, sponsored by UMaine Cooperative Extension and taught by Caitlin Hunter of Appleton Creamery.  It was a nine hour (!!) long workshop and we made jack, ricotta, and mozzarella.

We started with the jack, which is an aged cheese; it'll be ready in February or March.  That took all morning, and then in the afternoon we made ricotta from they whey of the jack and a 30-minute mozzarella (similar to the process I learned at Wolfe's Neck Farm last year). 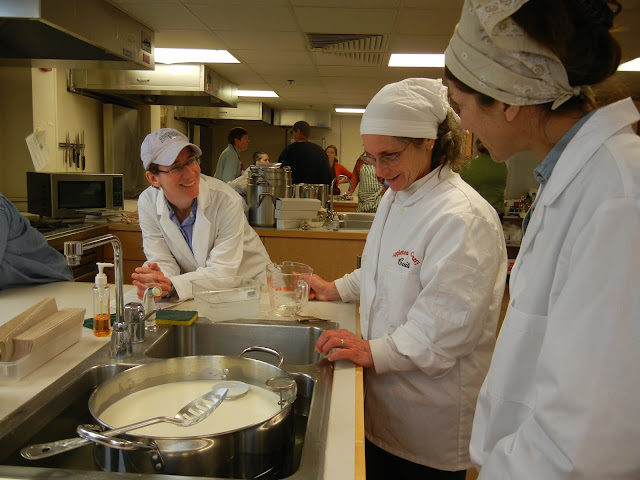 Here Beth Calder, UMaine Extension Food Science Specialist (left) and a class participant, chat with Caitlin Hunter (middle) over 5 gallons of goat and cow's milk.  The milk is resting in a sink full of hot water, as we slowly raise the temperature to 88*F. 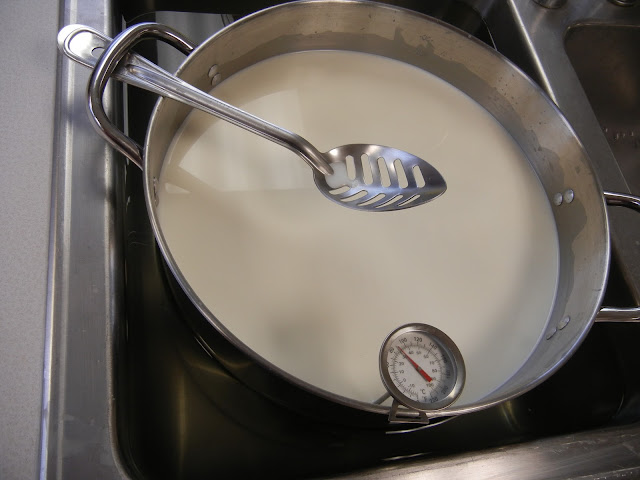 Jack is a cheese that takes a mesophilic or 'warm-loving' starter. Adding a starter culture kicks off the acidification process (aka fermentation) and gives it that great cheesy flavor.  After the culture was added at the right temperature and the cheese rested for a while, we added rennet.

I learned a lot about rennet and its sources from Caitlin.  Rennet is an enzyme that causes the milk proteins to coagulate or stick together and separate from the whey.  Since milk is about 89-90% water, with the rest being fats and protein, the process of acidification and then adding rennet makes all protein come together in a solid curd and pull away from the whey.

Rennet can come from animal, plant or fungus sources, and most rennet used in American cheese or available for cheese making is made in a lab, through the process of genetic manipulation, making it a GMO.  Boo-urns.  (This Madison Market article explains it nicely.) 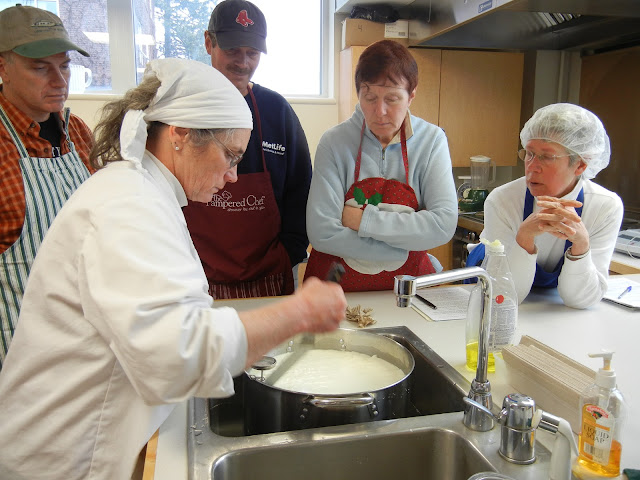 Here Caitlin is cutting the set curd into 1/2-inch squares, which helps even more whey be drawn out of the curd.  The drier the cheese, the smaller the curd, since small pieces of curd have more surface area, which allows more whey to escape from in between the tangles of milk protein strands. 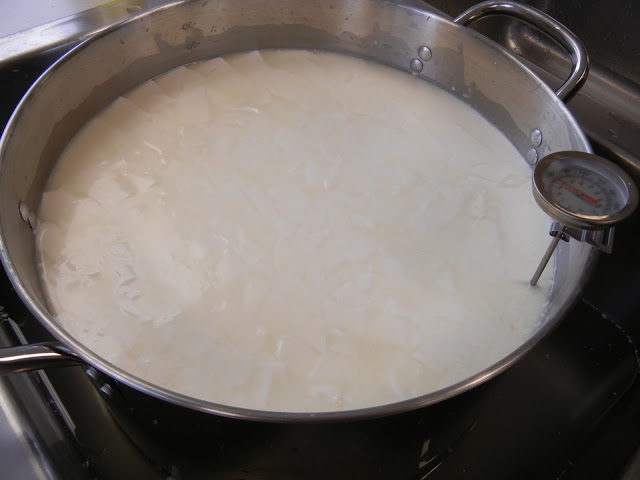 We slowly heated the curd again, while stirring it, to help the curd shrink and release the whey.  I could tell this step was where Caitlin's cheese making experience came in.  Knowing when the curd was ready to be pressed requires a 'texture test' done by taking a handful of curd, squeezing it, and observing the results. 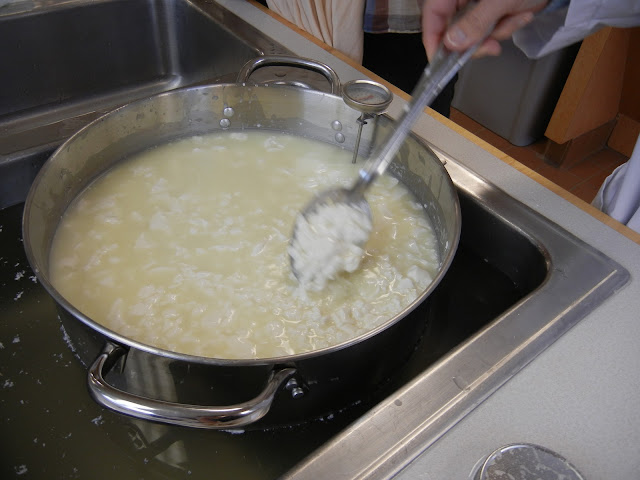 When squeezed, the curd should stick together and the pieces should have the texture of cooked chicken breast when pulled apart.  Caitlin frequently stuck her hand in the curd, swirled it around, and invited us to do the same to feel the curds bounce off the backs of our hands. 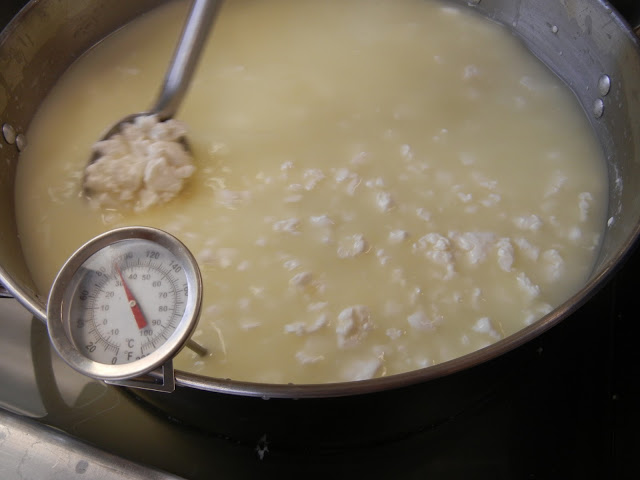 This step took a long time, but once all the curd was sufficiently dried out, we let the curd rest for a few minutes and then strained the curd into a colander lined with a cheese cloth. 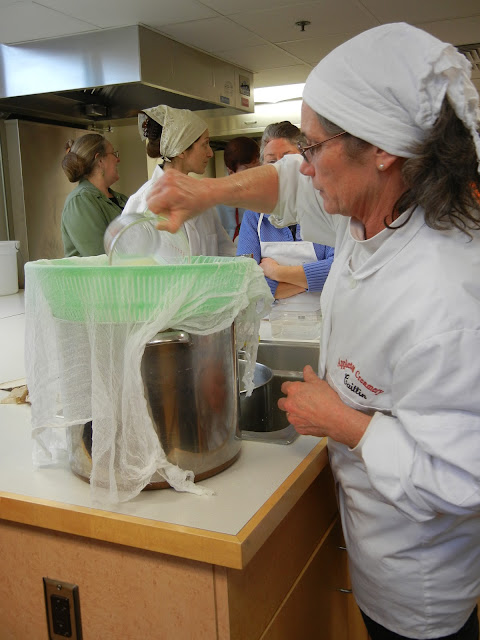 After all they whey had been scooped off and saved for ricotta making, the curd dumping began in earnest.  5 lbs. of curd when into that cheese cloth! 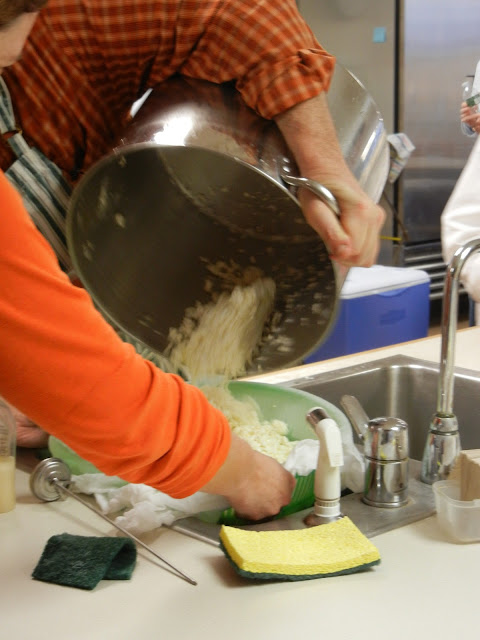 Then the curd was gathered up in the cloth, pressed firmly, attempted to be shaped into a round ball, and placed under a weight to rest for a few hours.  The weight system was simple- two cutting boards above and below the cheese, with a large water-filled stockpot.  The first pressing was 8 lbs. (a gallon of water), and then 25 lbs. (4 gallons of water). 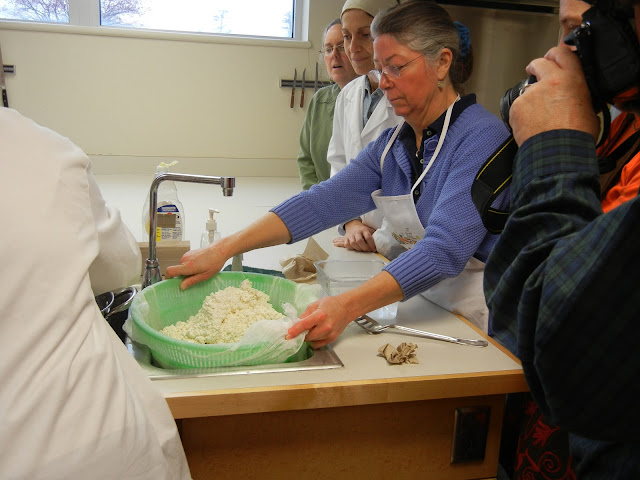 The jack cheese needs to be aged for a few months (in the refrigerator, even), so the cheese was raffled off to a lucky person- my boss!

At first I was disappointed that I didn't get to babysit the cheese, then I realized that this really was the best outcome, as Kathy will take care of the cheese and then share it with me in March.  Ha. 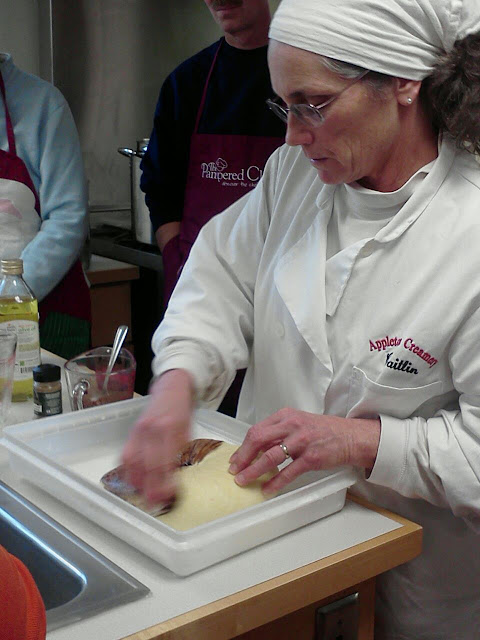 Caitlin brought a jack she made a few days ago, that was ready to be oiled.  The cheese needs to be oiled every few days at the beginning of the aging process, so it can build a protective rind. 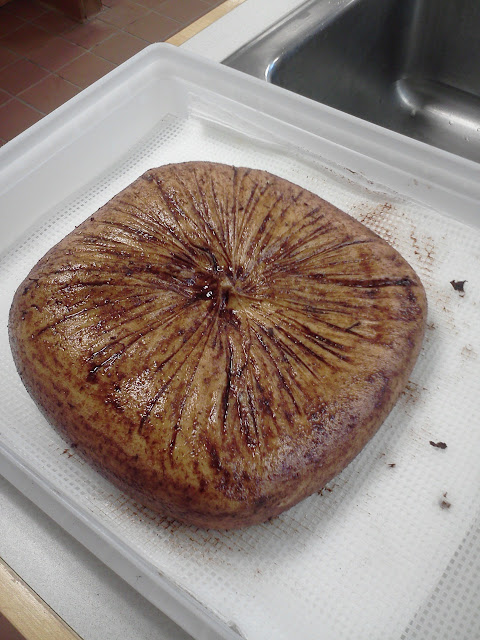 While this may seem like a lot of overwhelming steps that have a lot of room for screwing up, I actually feel like this is an accessible aged cheese for the beginning home cheesemaker.

Ricki of New England Cheese Making has a nice picture tutorial of the jack recipe.  When you see her do it, it looks so simple!  I believe that I can replicate this cheese at home, and I'm excited to give it a try. 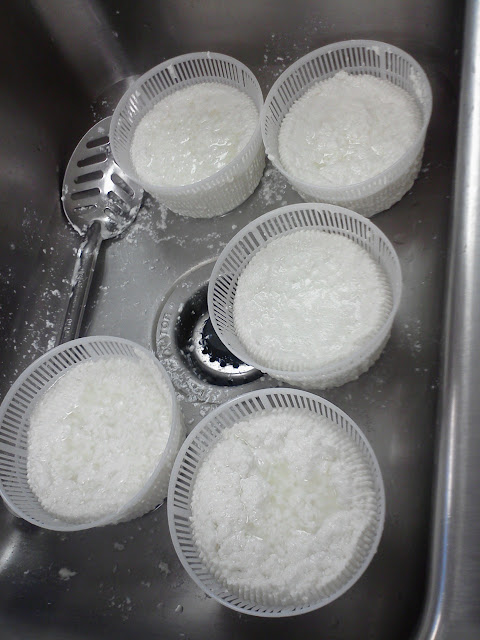 As a bonus, when you're done all of that, you have a lot of whey left over, which is perfect for making ricotta.  While we strained out most of the curd for the jack, there is still a lot left in the whey that can be drawn out through further heating and acidification.  Additionally, you can increase the yield of the ricotta by adding some whole milk to the whey.

All we did was heat the whey to 160*F, added some whole milk, kept heating to 180*F and added 1/4-1/2 cup of bottled lemon juice.  Then, as the curds rose to the top, we ladled them off into these cute little ricotta baskets and let them drain.  Voila, fresh ricotta!  Dead simple.  Again, check out Ricki's tutorial for the recipe.

Happy cheesemaking, kids!  And if you ever see Caitlin's Beginner Cheesemaking Workshop offered in your area ($80), I highly recommend it.  Totally doable skills.