Lest you think I'm late to the party and trying to suggest pies for the Eating Holiday that just passed, know that I made this for no reason other than that I had a lot of spare apples and was headed to a friend's for movie night. And I'm no super baker- it's just easy to whip out an apple pie... assuming you have a few tools in your arsenal. 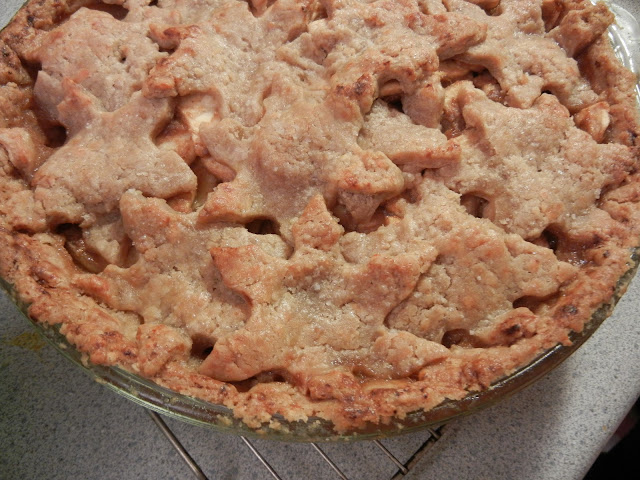 I have used this cheddar cheese crust from Gourmet magazine in my BLT pie before. And it's a weird crust, especially if you sub in lard for the fat. It was all crumbly (even though I'd added plenty of liquid) and so I just powered through and forced it to roll out and lay nicely in the pie pan.

Rather than stress over the aesthetics of the top crust, however, I used a snowflake cookie cutter to stamp out pieces and overlap them on top of the filling.  This prevents the big hole that forms underneath the top crust when the filling inevitably shrinks during cooking.

I love using a food processor for making pie crust, and then this diggly (an apple peeler, corer, and slicer) for peeling apples.  So if you have a few tools, a delicious apple pie is within an hour's worth of work.

My roomie J. made an apple pie the next day (apple pie off!), and hers was better!  She makes the Old Fashion Apple Pie from Simply Recipes, which uses an almond meal crust.  And it rules.  So two good options- and that cheddar cheese crust is to die for (tastes kind of like Ritz crackers).  Happy holiday baking!