Editor's note: Sonny's has closed, but is run by the same restaurant group as Black Cow. Read my first look at Black Cow.

I say 'revisiting' because I went in the first month Sonny's opened and was not too impressed. We had some underwhelming entrees and service snafus, but I didn't tell you about it, since I figured they needed a while to warm up. 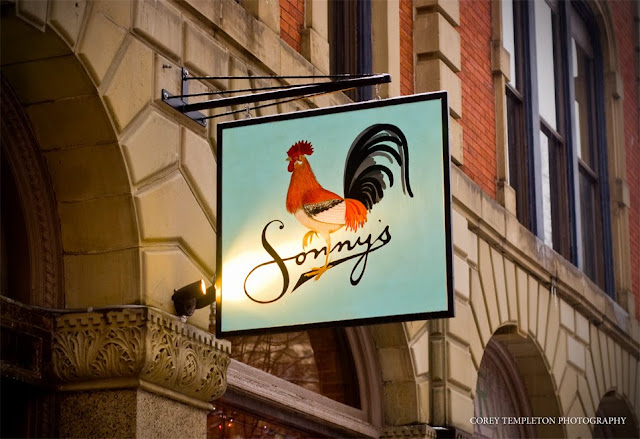 But now they've been open for over a year, so I decided (based on my love of Local 188) to take M's sister and BIL there for dinner during their visit. Sonny's won out as the not-too-risky choice for dinner. We figured we'd get a solid dinner and hoped for something on the level of Local 188, Chef Jay Villani's other restaurant.

But in the end, we just got solid (well, the cocktails are stellar). And while solid is not bad, it's just not elevated to the quality of dining found at 188. 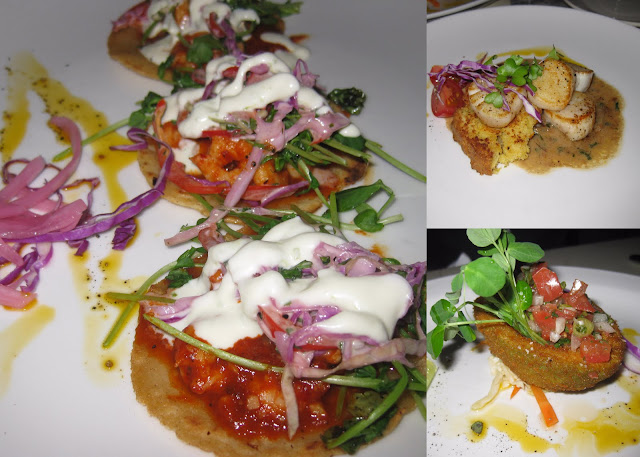 Like I said, the cocktails are excellent. We started with drinks (I recommend the 99 Problems- Cava, ginger, simple syrup, and lemon) and appetizers.

And aren't our appetizers pretty? We had the Maine shrimp tacos (or shrimpacos as the food runner said), seared scallops, and a fried avocado. The shrimpacos were the best- spicy, creamy, crunchy, with a bite from the pickled red onions. 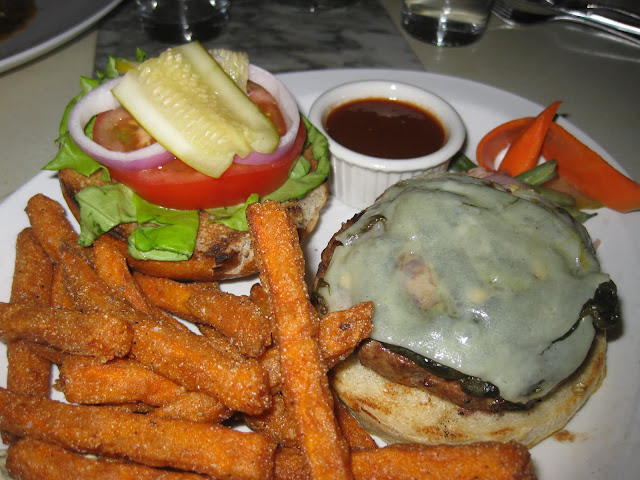 M. and I shared their poblano pepper and Manchego cheeseburger with a side of yam fries. And we also ordered their Caesar salad.

The burger was good- the yam fries are great- but I really loved the Brioche bun the burger came on. The poblano peppers were a distraction for me, but the burger was cooked right (like, not much at all). 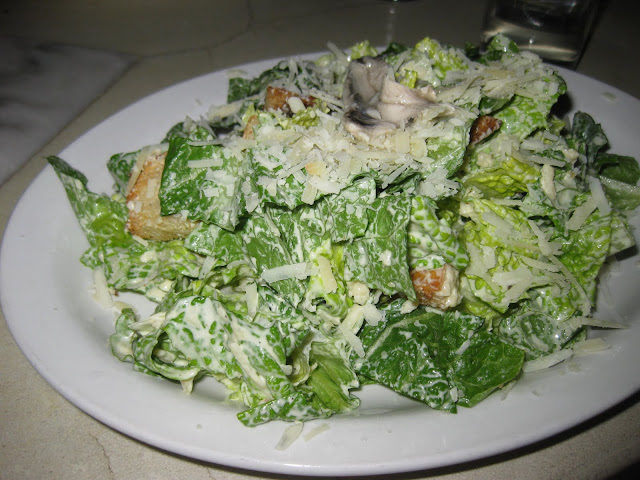 And the salad was awesome. J. said, why did you order a Caesar salad? and for a moment I was stumped. But, I love Caesars—they're a no-brainer for me. Though when they're bad, they're really bad. However, this one had lots of dressing, cheese, good croutons, and a topping of white anchovies. Delicious. 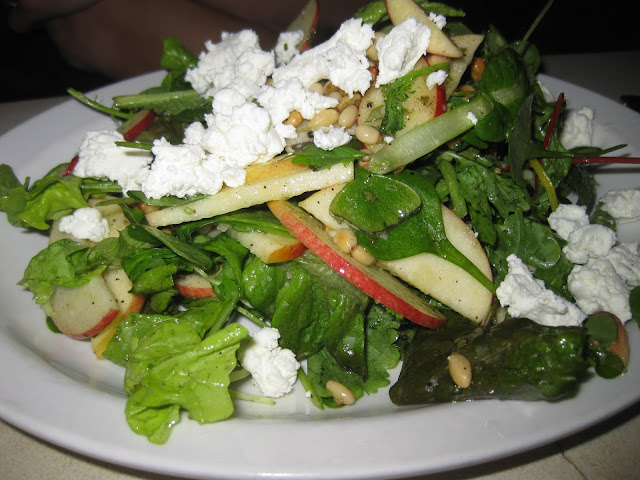 S. and J. took the same approach to their entrees- sharing the house salad and the fish special, mahi mahi with a curry spice rub and a ginger coconut sauce. It was awesome. I heard the house salad was great too, but didn't sample it myself. 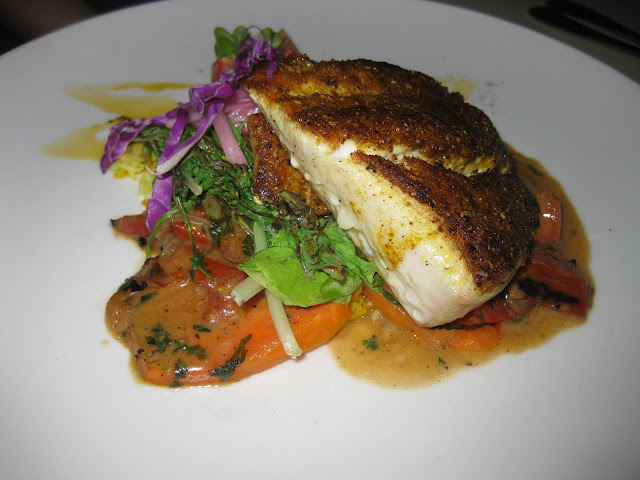 I love Sonny's interior- the redesign really shows off the spectacular building with remaining elements of an old bank- and their cocktail list. And I struggle to put my finger on what is missing from their culinary offerings. But after this meal, there was nothing that stuck in my head. No, 'how did they do that,' no 'I can't stop thinking about...' So while Sonny's offers a great libations and is a fancy hang-out spot, I will be saving my appetite for Local 188.
5 comments:

I have been whipping up a whole lotta weird stuff lately. I've been scouring the pantry in an effort to use up things I have, rather than buy new stuffs. Turns out? Stuff in the pantry you haven't used is there because... you don't use it. Wow. So I've been stepping outside my culinary comfort zone with some of these things.

But that's what potlucks are for! Fortunately, you don't have to attach your name to the dish you bring. You can just add it to the table and then feign confusion when someone asks about the dish.

This edamame hummus was at a potluck too small to hide behind however. But I have nice friends, so no one complained. 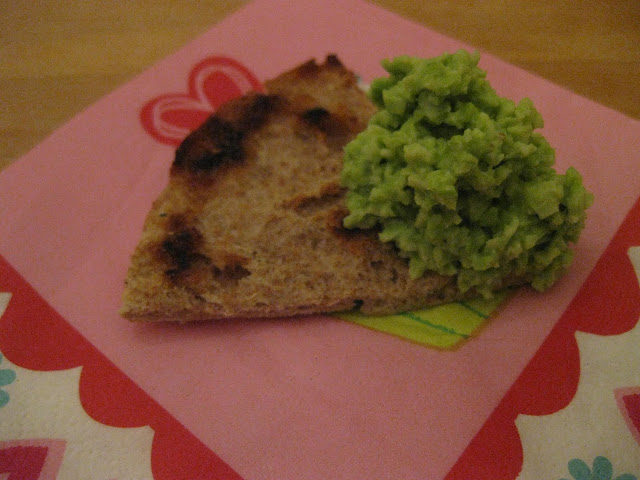 I used this recipe from The Delicious Life, which is written by a very entertaining woman. But I felt like this recipe needed some more oil or liquid- something to make it creamy rather than chunky. But it tasted pretty good, so if you have a bag of frozen edamame in your freezer, give this recipe a try. 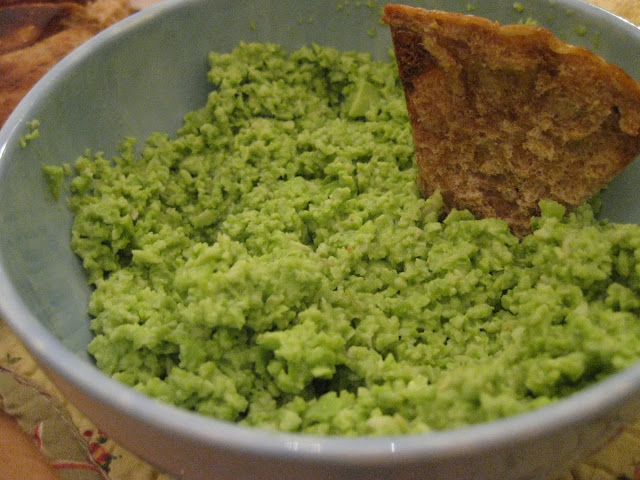 Edamame Hummus
from The Delicious Life

Cook edamame according to package, then drain. Place in an ice bath to cool. When cooled, drain edamame and remove all their little skins. This can be done while watching Oprah, and by squeezing the bean at one end- it will pop out of its skin.

Last year, while rooting the New Orleans Saints to victory during the Super Bowl, I thought I'd try the themed-food thing (which snooty Andrew Knowlton disparages. Still love you though, Andrew!). And so I made a king cake and gumbo. This year, I toyed with the idea of themed-food, but then just decided to go with regular fare (there was cheese in everything though, so I guess that counts for a Wisconsin theme).

But, somehow, I decided to make another king cake, which evolved into king CUPcakes. Don't ask me, it made sense at the time. 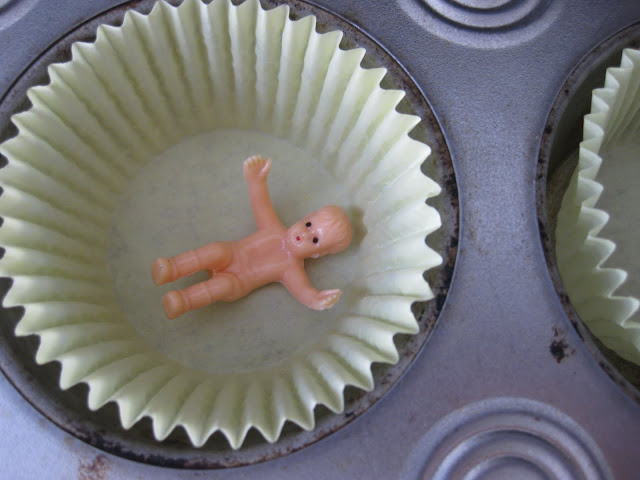 Do you know how long and hard I had to look for plastic babies last year?

Anyway, my king cake last year was lackluster (thanks a lot, John Besh), so I turned to King Arthur Flour's blog for some recipe inspiration.

As a side note, I have totally fallen in love with the King Arthur Flour baking blog. I know I'm a little late to the party, but their recipes are totally hitting it out of the ballpark every time. 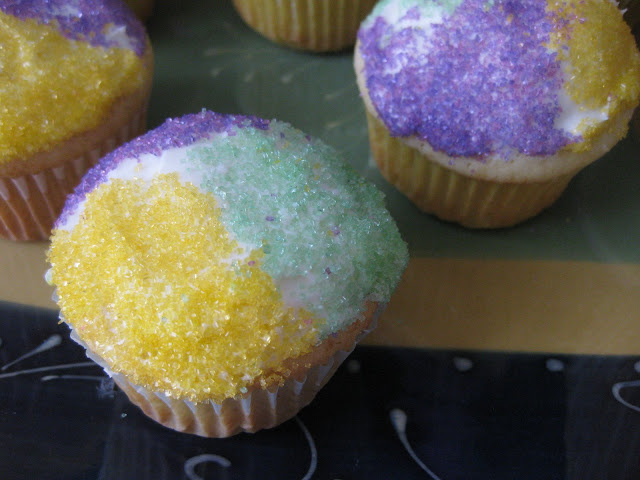 So these are king cupcakes because they are flavored with nutmeg, vanilla, and lemon, apparently traditional king cake flavors (how did I miss that last year?). They're also frosted with a cream cheese frosting, mimicking the cream cheese filling you frequently find inside a king cake.

And then, there's the green, gold, and purple decorative sugars for the traditional colors of the Mardi Gras celebration. A plastic baby was baked into one of the cupcakes, for which the lucky winner gets a year of good luck and to bring the king cake to next year's party. 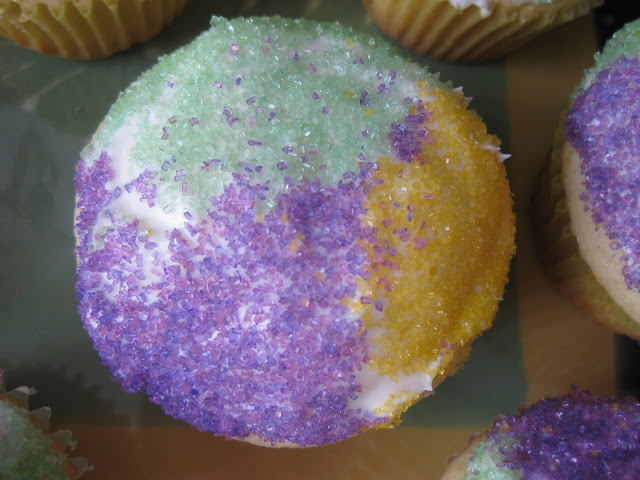 Anyway, I was really excited these cupcakes turned out well, since they were my first from-scratch batch. It was surprisingly easy to make cupcakes from scratch- as easy as from a box!- and they tasted just as good, if not better (oh, how I love cake from a box, though). 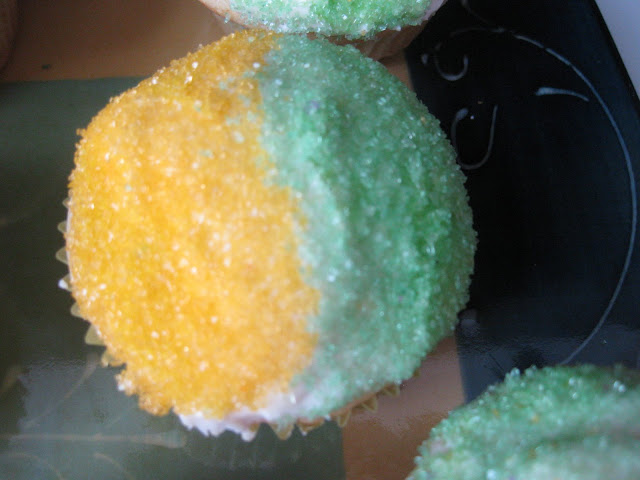 And of course, since we had the green and gold out, M. made some Packers themed cupcakes (also my high school colors, yeah, North Harford!).

I didn't do a step-by-step for this recipe, since they do such a great one on the KAF blog. So come Mardi Gras (March 8th), head over there, break out your beads, bones, and boobs, and celebrate Fat Tuesday with some great cupcakes.

As another side note, I've never been to New Orleans or Mardi Gras, I just need reasons to get excited about things in late February and early March. If anyone wants to take me to NOLA, I'm available. Anytime.
12 comments: 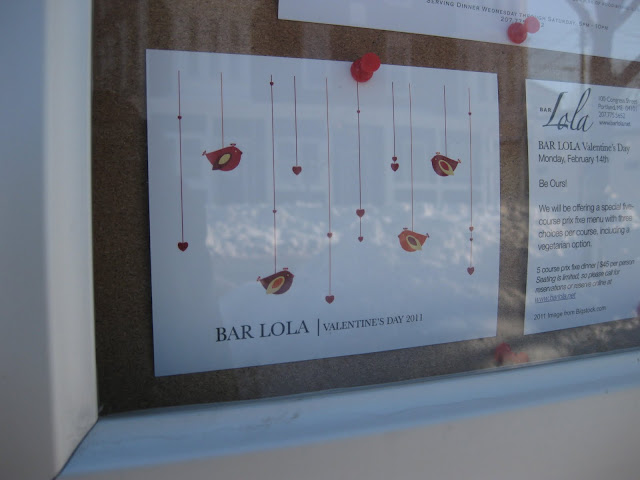 Valentine's Day is one week away! This fact will probably elicit one of two reactions from you: 'meh' or 'oh shoot, I need to decide where to take my date!' Well, if you already have a steady and want to go out to eat, there's plenty of nice prix fixe offerings at restaurants around town (see Portland Food Map's event calendar for a list). And any of the romantic restaurants would be lovely to dine at while gazing into each others' eyes (Bar Lola, Bresca, 555).

But for this month's blogger project (see last month's Burger Reviews), we decided to make a Valentine's Day dinner recommendation for a first date. And that one little word, "first," changed everything. I would NOT recommend taking your first date to an expensive, romantic restaurant! First dates should be more casual. Plus, on a first date, you'll be nervous. And when I'm nervous, I tend to drink really fast. So, don't risk becoming "that guy" by being all drunk and loud in a tiny restaurant!

Anyway, because of that one little word, I'm recommending that you go to Local 188. It is one of the more solid restaurants in Portland, for both good food and service. They have inexpensive bottles of wine (or expensive ones, if that's how you roll), fantastic housemade cocktails, and a good tap list.

And of course, the food is great, too. Their menu lends itself to sharing intimate bites (did our hands just brush over the plate of olives?) or getting a giant steak all to yourself, if the date isn't going very well.

Make a reservation for a formal date or sit in the lounge or at the bar for a more casual one. However your date ends, you'll be sure to have great food and drink at Local 188.