I just may be the last person in town to make it to Bayside Bowl, and I'm glad I finally did. Of course, there's the bowling, which is awesome (I decided I should go more, so I don't throw every other ball in the gutter), but I was happy to learn that the food is good too. 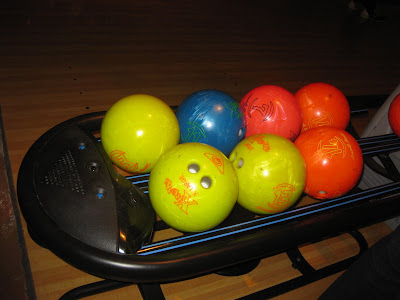 M. and I went down to the bowling alley early last Friday night, before all our friends showed up to celebrate A.P.'s birthday. We snagged a seat at the bar, under a big skylight that let in lots of natural light. The bar has a fairly standard selection of local beers on tap, most of which are $4, except for Moosehead at $2.50.

The menu, however, is anything but standard. Definitely an eclectic mix of food, from chicken chimichangas to coconut curry chicken poppers. It's a fairly large menu, and I hope they have the talent in the kitchen to pull off such a wide variety of food. 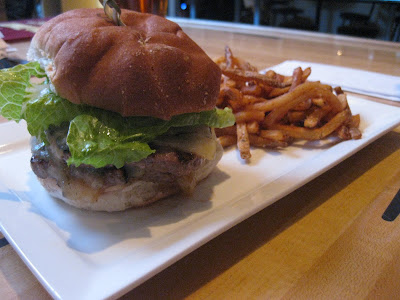 Our double cheeseburger ($9) gave us every indication that they could though. The burgers are pretty thin, so even though our bartender asked us for a temperature on the burgers, they were pretty well done. But they were greasy enough and on a huge soft roll, so we didn't mind. The pile of homemade fries that came with the burger wasn't excessive, but plenty of food to split between the two of us without weighing us down for our bowling game later. 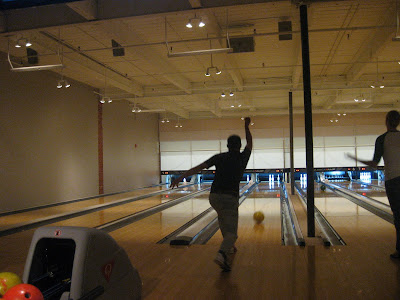 Our service at the bar was pretty bad- I'm not into the 'abrupt, rude bartender, just 'cuz we're at a bowling alley' act, but once we moved to a table in the bar, our server was very nice and accommodating- even happy to get us what we needed to cut and serve the birthday cake we brought in. 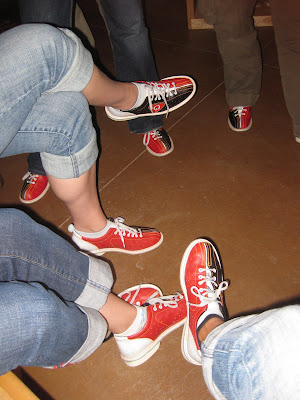 There was live music as well, which was really loud if you were in the bar area, but fine to listen to from the bowling lanes. But I really enjoyed the space, the food, and the atmosphere, so I'm looking forward to going back frequently for cheap eats and fun with friends.