Several near arguments were had at the end of last week over the nature of celebrating Easter. Obviously, for religious folk, it's a non-issue. They go to church like 3 times in one weekend and eat a big dinner on Sunday with their friends and families. Same non-issue for most people with kids. The Easter bunny comes, Easter eggs are dyed and hidden, there's often a party to attend, and again, a big dinner.

But for the non-religious, childless person not living in close proximity to their family? It's a crapshoot! Just another Sunday (albeit one where all the markets are closed and your friends are probably busy or out of town)? Or an opportunity to have a nice dinner with your other displaced friends. And so when our friend B. lamented on Thursday night that she was missing Easter dinner (Easter dessert, really), we decided last minute to have said big dinner.

M. the culinary creative genius of the bunch, decided he wanted to have deconstructed gyros: Roast leg of lamb, sauteed spinach, roast tomatoes, and a mint, goat cheese, cucumber salad. 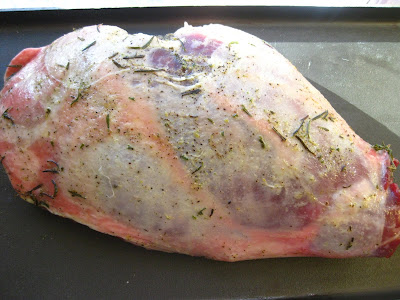 We bought a 5 lb. bone-in New Zealand leg of lamb from Whole Foods Market (totally not local, maybe as non-local as you can get? but there is no lamb at the famers' market. Every other animal, though!), and rubbed it with thyme, rosemary, salt and pepper, olive oil, and honey. We let it sit at room temperature, as per Erik of (the now defunct) Evangeline's recipe on Find.Eat.Drink. 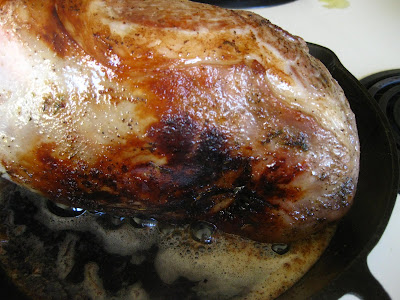 M. seared the leg in olive oil and butter in a hot cast iron skillet (we encountered the problem of not having a big enough pan for this monster!), and then put it into a 425 degree F oven for 20 minutes. Then he turned the oven down to 300 and roasted the leg until an instant read thermometer read 130 degrees F in the thickest part. 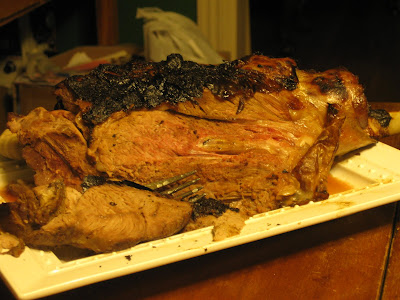 And as you can see, this method yielded a perfectly roasted leg of lamb. Some bits were more well done than others, and none of the leg was dried out or tough. M. figured he would cover it next time, as our oven is wildly out of control when it comes to temperature, and so it blackened a little more than he would have liked. But the meat was so juicy and tender, even though it was cooked medium well towards the outside. 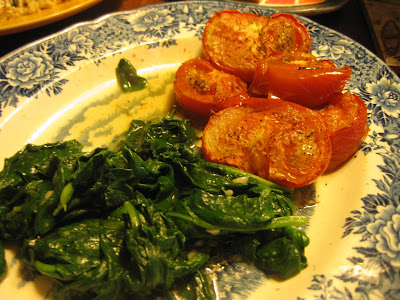 Not to be upstaged by the meat, the veggies were great as well. I simply sauteed some 'cosmetically challenged' spinach from Fishbowl Farms in olive oil and garlic, and roasted Backyard Farms tomatoes seasoned with salt and pepper and olive oil in the oven (with the lamb) for an hour. 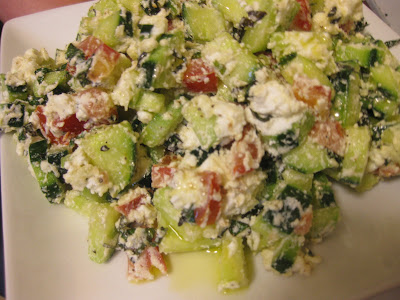 M.'s mint, chevre, cuke salad was a hit as well. We used plain chevre from Tourmaline Hill Farm and crumbled it with chopped mint, a diced English cucumber, diced tomato, a clove of diced garlic, salt and pepper, and olive oil. The chevre was nice, because it wasn't too assertive, but nice and creamy. 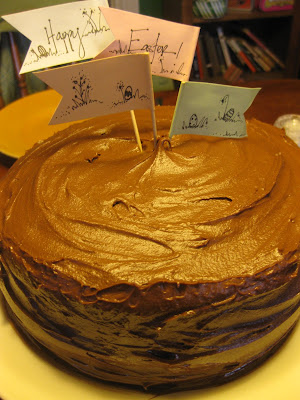 And oh my gosh, the piece de resistance was B.'s chocolate cake. She used a Martha Stewart one pot recipe (maybe this one?) and it was. so. effing. good. So moist and delicious!! And then she went hog wild on the frosting- cocoa powder, powdered sugar, butter, cream cheese, sour cream, and melted Ghirardelli chocolate chips. I mean, why not throw all those things in? Evidently, it makes the most perfectly fluffy, creamy, slightly tangy chocolate icing ever. Ever.

At the risk of starting another pseudo-argument! I want to say I had a great time celebrating my secular Easter on Sunday, simply because B. brought over that chocolate cake.