I thought long and hard about where to take my BFF (Best Foodie Friend) for dinner when she came to visit last weekend. I polled Facebook friends, read reviews online, and poured over online menus. Deciding between Hugo's, Back Bay Grill, Fore Street and Bresca, I settled on Bresca.

Obviously some heavy-hitters in that rotation. And Bresca is the only one of those that I've eaten at before. But I decided that I'd go with what I knew was good, for (relatively) inexpensive prices, and that my friend would love that Krista Desjarlais is not only a woman chef, but one nominated for the James Beard award as well. 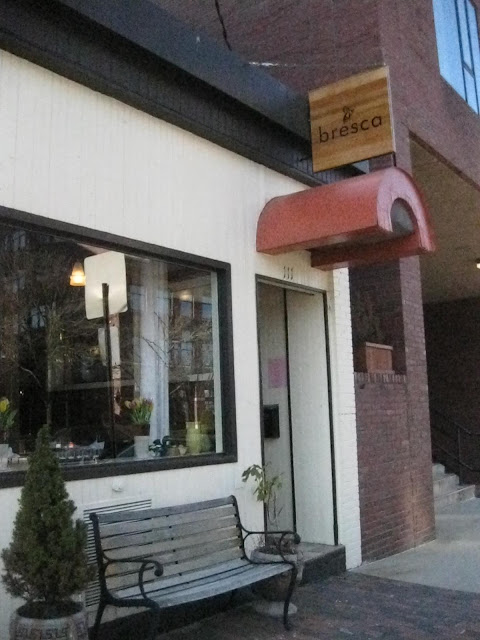 And I was right that Elizabeth would love it there! She was into the shabby chic decor and the Florence flasks that they pour your water our of. The restaurant felt a little... pink the night we were in there, which is Elizabeth's favorite color, so WE didn't mind. It was just a little funny. Pink roses, flower petals scattered on the doorstep outside, pink menus, LOTS of candles... it made it seem like I was trying to hit on her. 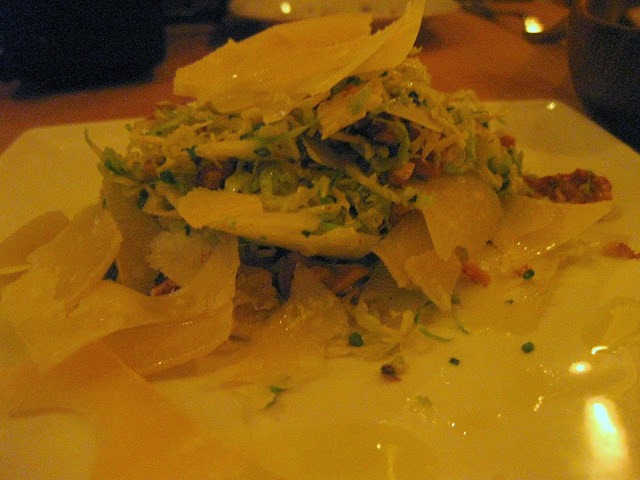 My friends A&R had just dined at Bresca the night before, so we were versed on some not-to-be missed menu items. So we started with the shaved brussels sprouts, toasted walnuts, parmesan, pecorino and olive oil ($7). And A&R were right- it was delicious. Such a simple preparation for the vegetables, but nice and nutty, salty, and crunchy. We marveled at how the sprouts seemed to be raw, but yet were so flavorful. That's it!? we marveled. She must have done something more to them! 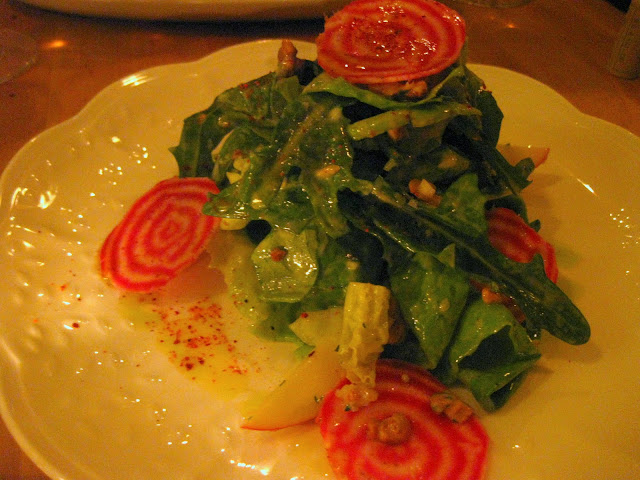 Next we shared the Waldorf salad with local greens, walnut, apples, Chiogga beets, and a buttermilk dressing ($10). I thought Waldorf salads were that gross thing my mom used to make with mayonnaise, apples and grapes? I don't care what you call it, as long as there's not mayonnaise on my fruit. This salad was great of course, I don't think you can go wrong when you add apples and walnut to some bitter, spicy greens. And the beets didn't add much flavor, but were a great visual. Very Alice-in-Wonderland! 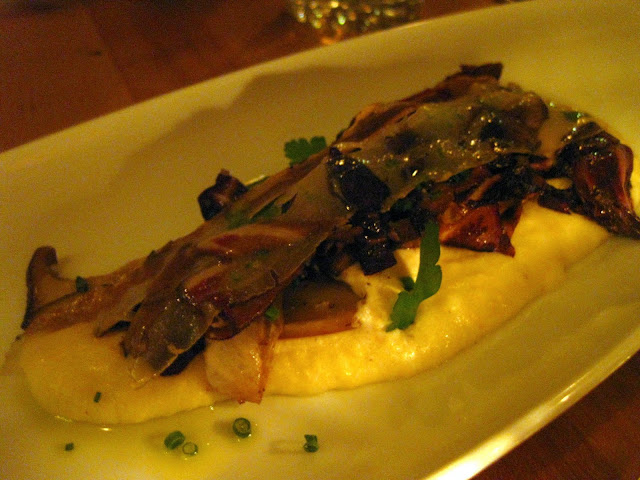 We shared the toc as well, smoked ricotta, creamy polenta, royal trumpet mushrooms, radicchio, lardo ($10). This was a great dish, even though 'smoked' isn't my favorite flavor. The ricotta made the polenta super, extra creamy, and the big hunks of mushrooms were so meaty and rich. The red radicchio added a nice texture contrast- it was sauteed, but still crunchy and the lardo... well, need I say why draping thin cured slices of pork fat over anything is a good thing? 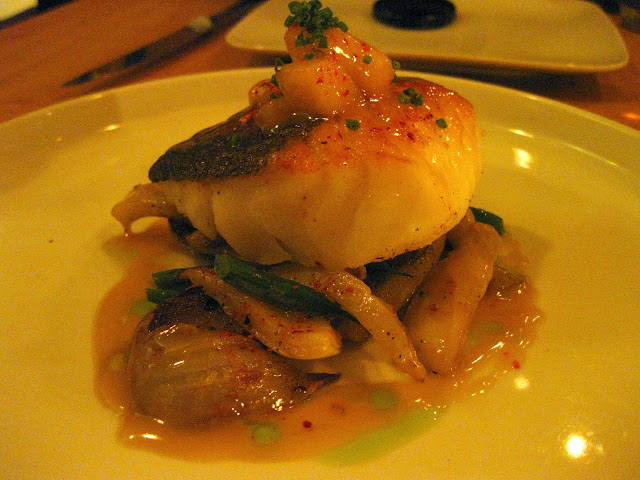 Again, more splitting, this time the market fish which was cod. It was served over fennel, crispy potatoes, and green beans ($25). Elizabeth and I both agreed that we could have eaten the whole portion ourselves, and were a little disappointed at the amount of vegetables that came with our fish. Not because we thought the kitchen should have amped it up because we were splitting it- it wasn't a lot of vegetables for even one person. But the cod was expertly prepared, with a crispy skin and little segments of fish that popped off under the slightest pressure from your fork.

Come dessert, there was no more splitting! We had a chance to scope out all the desserts, as the table next to us was a course ahead of us, and ordered all 4 of them. 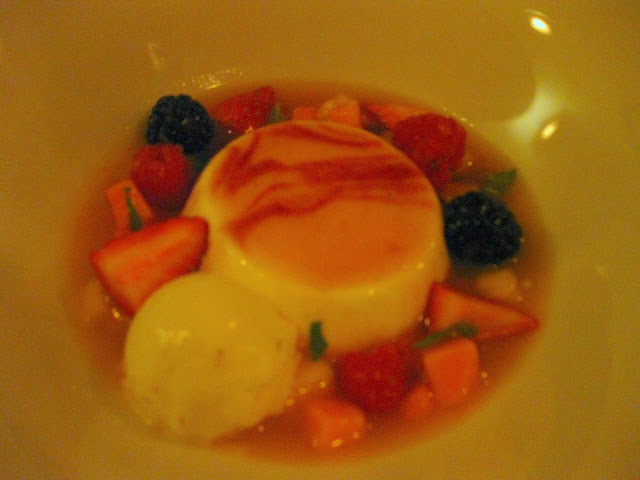 I knew the buttermilk panna cotta was a delicious dessert (I'm not really a chocolate girl), but the true winner was the Napoleon. 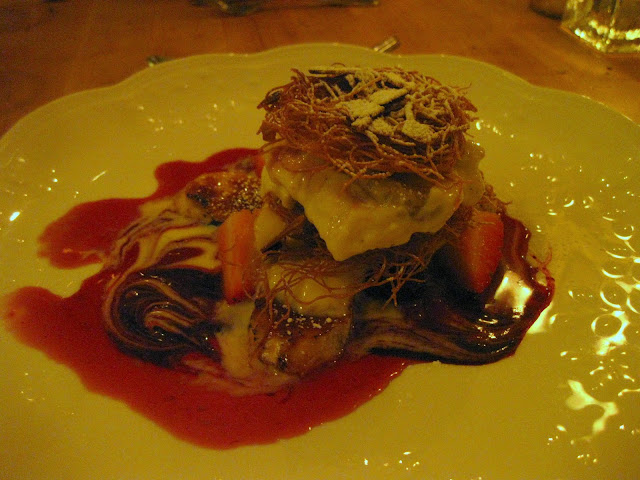 There were caramelized bananas, strawberry sauce, and delicate little bird's nests of phyllo dough. We harassed our waitress to find out how these were prepared, but other than 'grated then baked,' we didn't get much detail. Actually, maybe that's enough detail for some... but for the food-obsessed like Elizabeth and I, we wanted more details! But we chowed this dish, and were fighting over (OK, I was fighting for) bites. I thought we were sharing! Nope. 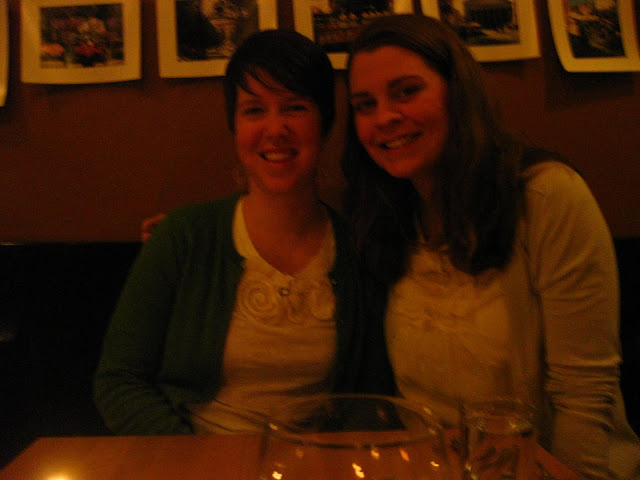 Thanks to our friends at the neighboring table for this shot! I hope between my careful consideration and these photos, you understand why Bresca is a sure thing for a nice dinner out in Portland. The food is spot on, the prices are reasonable, the wine list extensive, and the desserts excellent. You'll feel special eating here, but comfortable enough that you can make friends with your neighboring tables and drink a lot of wine.