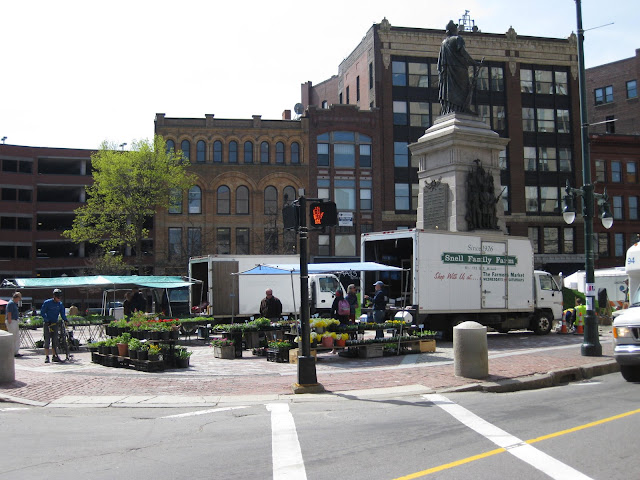 Look what I found! Spring has officially sprung. I am so excited for local eats and delicious, fresh eggs and veggies all summer long. 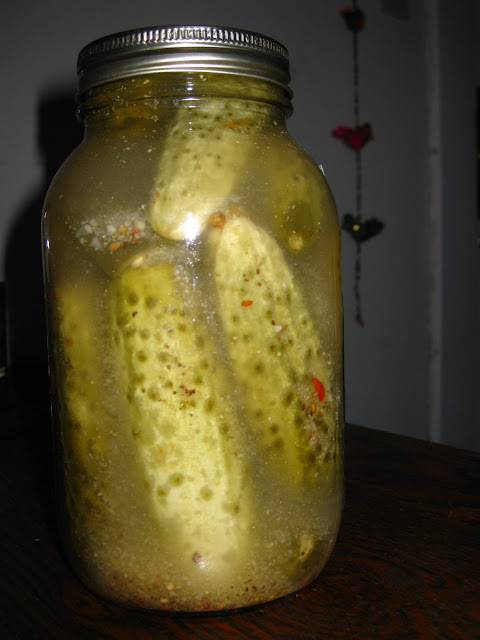 And oh, how I missed hot garlic pickles from Uncle's Farm Stand. These babies will make you sweat!
No comments:

Takin' It Through the Garden or Veggie Breakfast Burritos 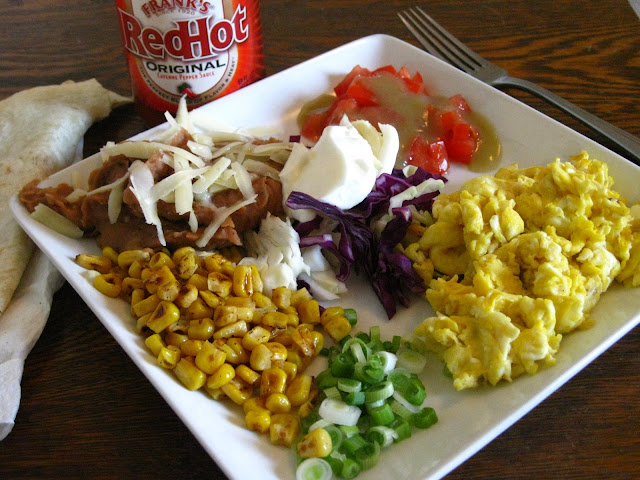 Yum, Mexi breakfast burritos. The title refers to Soby's Cafe in Bozeman, Montana. There you can get the most delish breakfast burritos (ie. Chorizo and eggs!) and then "take it through the garden," which means they add lots of awesome veggies to your dish.

For breakfast one morning, I decided to recreate all those awesome breakfasts I had when visiting Bozeman. Veggies = good.
1 comment:

I recently learned of Chicken Piccata - the person who was talking about it was making ruthless fun of the place that served it (which happens to be, um, our place of employment), saying that it was like, sooooo 1980 or something like that. Like that food trend had come and gone, but here we were, serving it like shoulder pads and big hair were still in... (wait, did you see Jennifer Connolly at the He's Just Not That Into You premier? They're baaaaack!)

But I thought the Chicken Piccata was delicious, foodie trends be damned. So I decided to make it at home, as a sauce to top the Sunday Roast Chicken (made on a Tuesday). 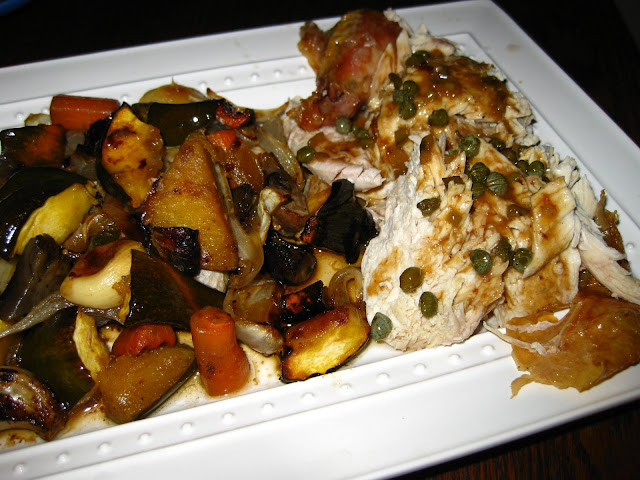 Mine, however, was not as delicious as the restaurant-who-shall-not-be-named's.

I took the pan drippings from my roasting pan and put them in a saute pan over medium heat. Then I added a minced scallion and sauteed it until it was wilted. I cranked the heat up to high and added 1 cup of chicken stock.

My sauce was a little on the salty side, but I won't give up. This is such an easy pan sauce and can also be made with the drippings after you saute chicken breasts.
No comments:

Amigo's was the perfect spot to enjoy the beautiful weather we had on Sunday (the warmest it's been since I moved here). M and I went down to have a margarita at the 'Best Dive Bar,' recently recognized as such by the Portland Phoenix. The Phoenix points out that the margs here have developed a cult following, and ever since the weather has shown a hint of warmth, I've been drinking the Kool-Aid (or the tequila, as it were). 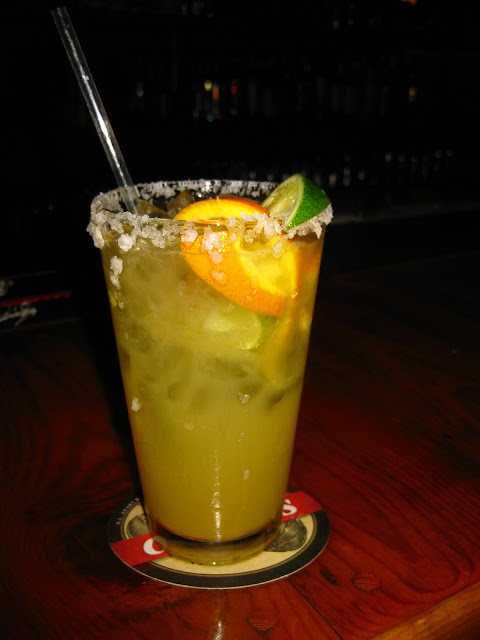 After a few of these babies (ok, after ONE of them- they're stiff!), I was making unwise wagers on a dart game and becoming amigos with everyone out on the deck. So get yer ass down to Amigo's on the next nice day, ante up to the bar, order one of Sarah's margs, and prepare to have a good time. 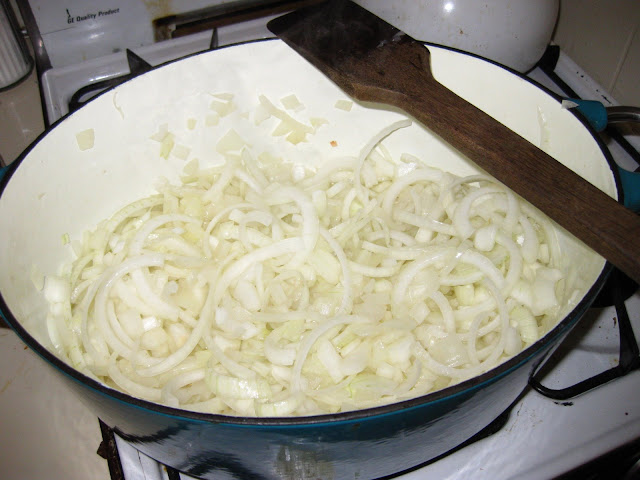 I used two sweet onions, sauteed them in olive oil and butter... 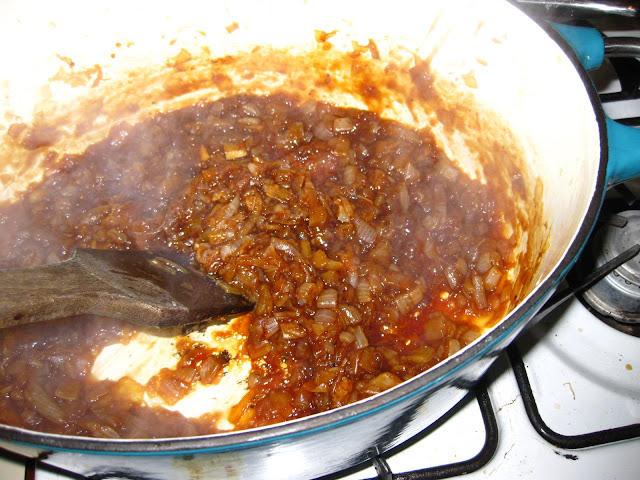 Until they caramelized. I deglazed the pan several times with beef broth and dry sherry and then added 3 cups of beef broth. Season with s&p to taste, and add some fresh thyme. 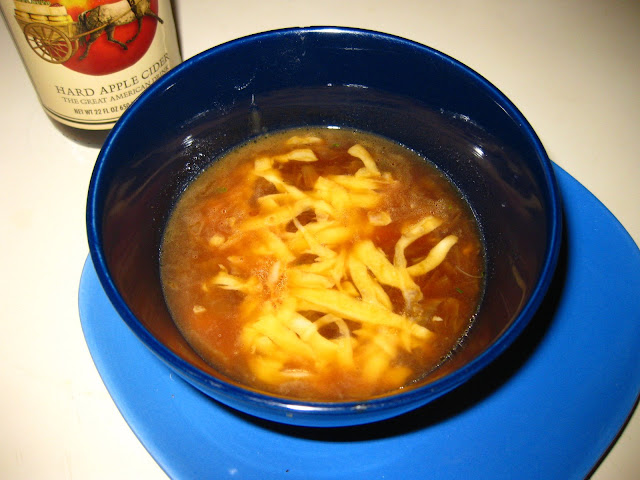 Et voila! I used Emmenthaler cheese, which actually wasn't that good. And I never say that about cheese. This brand (or type of cheese) was kinda bland. Maybe I should have stuck with Gruyere.

This was a "farewell to winter" soup - I made it when it was 70 degrees out on Saturday. Spring, here we come.
1 comment:

Portland is a town of imports, or people 'From Away,' as you know... so I'm sure there's a lot of mid-Atlantic-ers, like myself that have strong opinions about the best Philly Cheesesteak. I'm not going to try to wade into the argument about which one's the *best,* but I'd love to hear your opinion on where to get a good one up here.

This one came from my kitchen and was bitchin'... 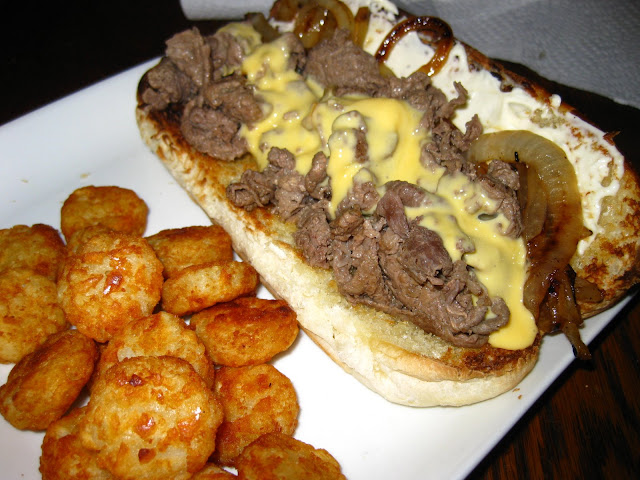 (And yes, that is Velveeta cheese sauce.)

I found a great website that will help you find a good cheesesteak, no matter what state you're in: The Best Philly Cheesesteaks. The best one in Maine is apparently at Bennett's in Kennebunk. Anyone been there?

And while I won't lobby for it being the best, since I haven't had them all... I had a really great cheesesteak at Jim's Steaks on South Street in Philly. Yum.
No comments: 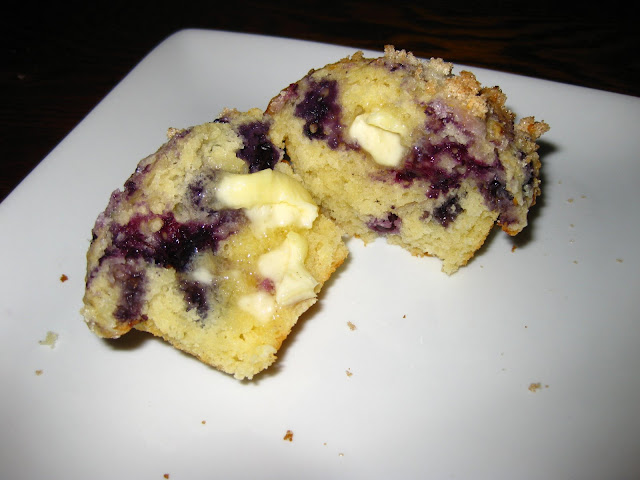 A great recipe for up here in Maine, where I plan on picking so many blueberries come summer. This recipe uses frozen berries, but I can't wait to use fresh, local fruit. 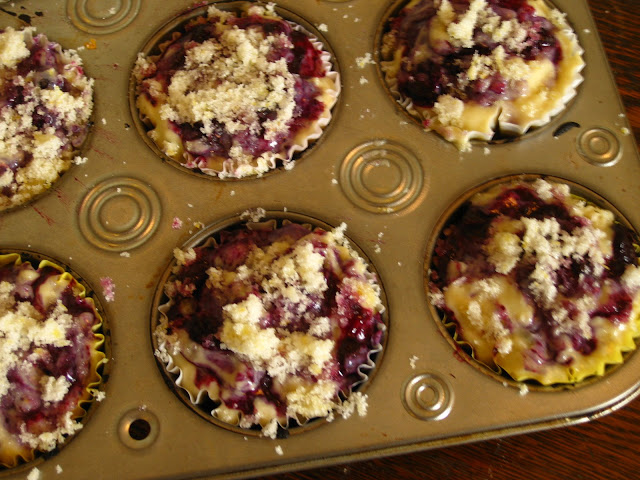 Two unique things about this recipe are its use of blueberry compote stirred into the muffins right before they go into the oven and the delicious lemon sugar topping. 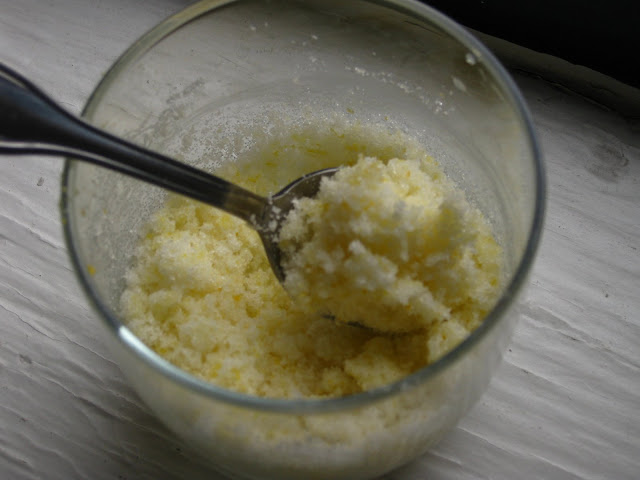 For the topping: Stir together sugar and lemon zest until combined; set aside.

For the muffins: Preheat oven to 425 degrees F. Bring 1 cup blueberries and 1 teaspoon sugar to simmer over medium heat. Cook, mashing berries with a spoon until berries have broken down and mixture is thickened and reduced to 1/4 c. Cool to room temperature in a small bowl.

Whisk flour, salt, and baking powder together in a large bowl. Stir 1 cup remaining blueberries into dry ingredient mixture. In a seperate bowl, whisk 1-1/8 c. sugar and eggs together until mixture is homogeneous. Slowly whisk in butter and oil until combined. Whisk in buttermilk and vanilla until combined. Using silicone spatula, fold egg mixture into flour mixture until just moistened. (Batter will be lumpy, but do not overmix.)

M. got gift cards for his birthday and a HUGE score was this dutch oven from Marshall's! (The man loves Marshall's.) I am so excited about all the things we can cook in it, its beautiful color, and this delicious chili M. made as the inaugural dish. 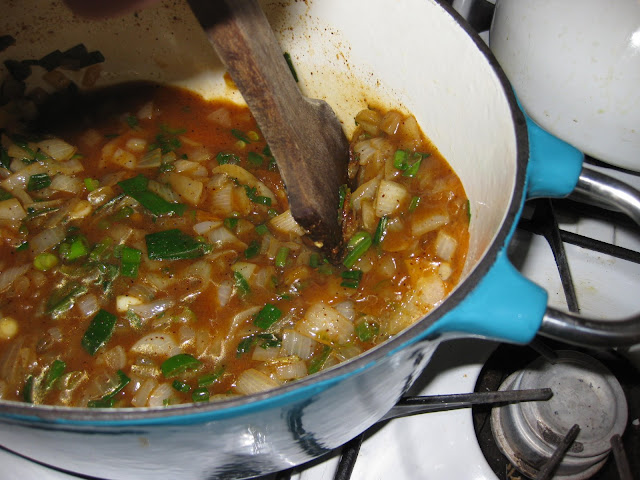 The best part was the meat he used. He spied shaved steak tips... or something like that... at Hannaford's. Basically, steak 'n' cheese meat. Mmm.. Philly cheese steaks. I'll be going back for more, fo' sho. But anyway, it was a really good addition to the chili. 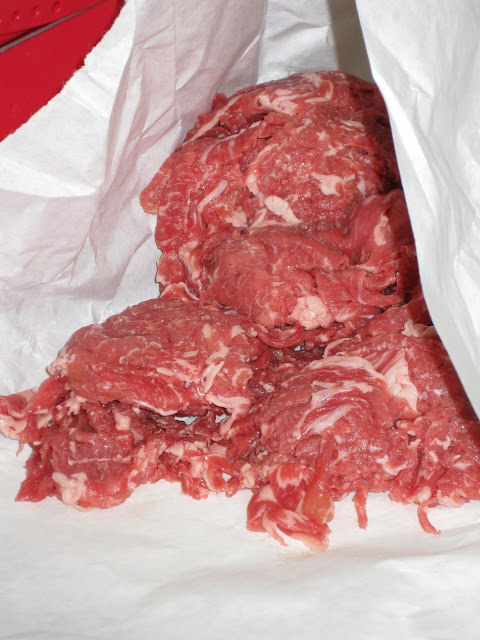 And I'm the lucky girl who got the bay leaf. Here's to lots of luck (and good cooking) this spring! 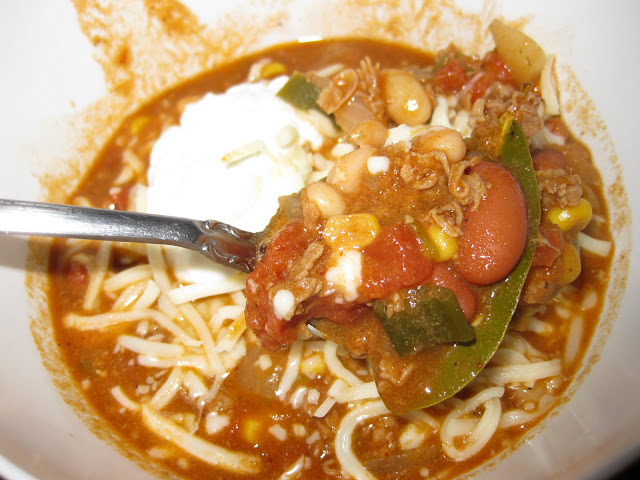 This simple dish is inspired by A Teen's Guide to Going Vegetarian by Judy Krizmanic, a book I read a lot in my teenage vegetarian days. I used to meatify it by adding chicken dredged in cornstarch, but I wanted to sub in some local Maine shrimp. 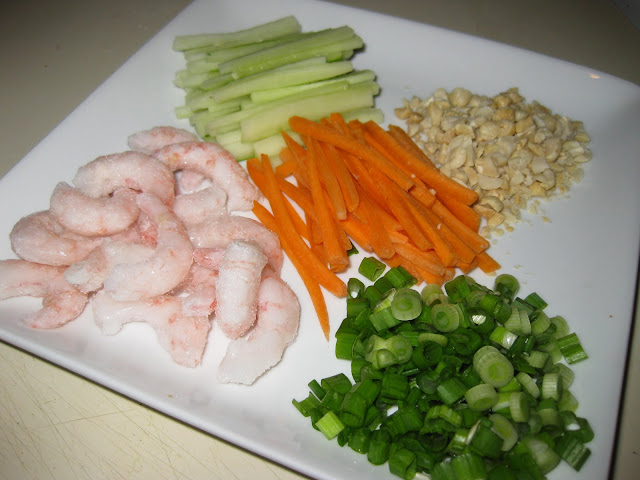 I was told by the nice seafood guy at Hannaford that Maine shrimp are out of season... what? food that actually can't be gotten out of season? Unheard of! But he was helpful and pointed out frozen Maine shrimp that were on sale (the brand is Cozy Harbor, out of Portland). 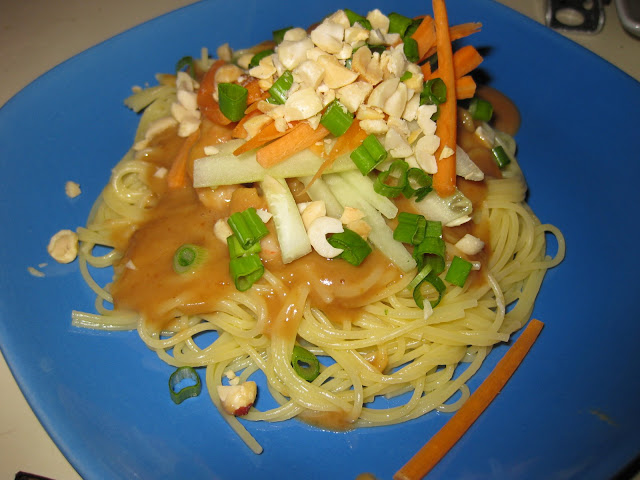 Combine ingredients in a saucepan and heat over medium heat. Whisk in 1/2 cup hot water and simmer over low head until flavors are well blended, 15 to 20 minutes.

Stir in thawed shrimp and heat through, serve over angel hair pasta or spaghetti, garnished with julienned carrots and cucumbers, chopped peanuts, and sliced green onions. I love this dish and hope you do too, because it's simple, fresh, delicious and can be tweaked to your own preferences.
1 comment: 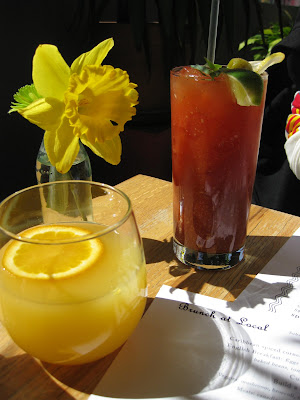 Because M. and I don't have family in the area, we decided to treat ourselves to what is fast becoming our favorite restaurant in Portland: Local 188. We must have good table karma at Local, because we scored a table at 11, with no wait and with no reservation. To start, we both ordered drinks (mimosas and bloodies, each $5). 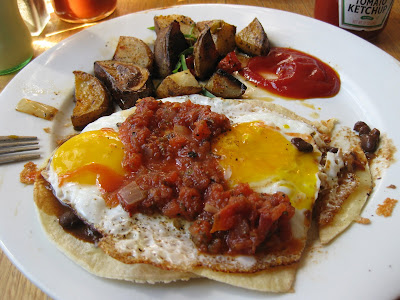 I had the huevos rancheros ($8) and M. ordered the full English breakfast ($10). And while I hate to say ANYthing bad about Local, my huevos were only okay. M. was pleased with how much food he got (he was worried he wouldn't get enough!) and his delicious, salty crispy English muffin (baked in-house). But I've had better incarnations of huevos rancheros. It would have benefited from more veggies, especially avacado.

But that said, we escaped with a $30 tab, which felt was quite reasonable for a nice restaurant's brunch. 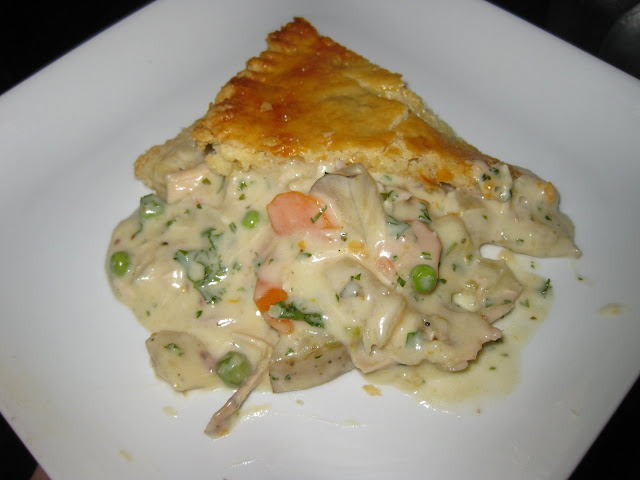 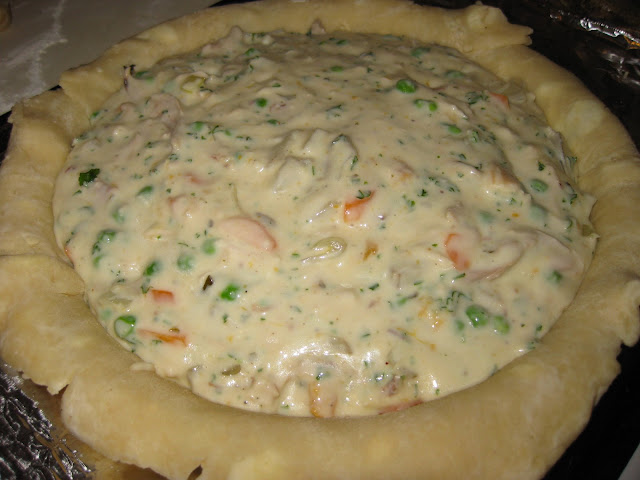 With a rubber spatula, using a folding motion, mix dough until it is slightly tacky and sticks together. Divide dough into two even balls and flatten into 4" disks. Wrap in plastic wrap and refrigerate for at least 45 minutes.
2 comments:

For M.'s birthday dinner, we went to Margarita's, our neighborhood Mexican chain restaurant. God knows why, alcohol may have influenced that decision. 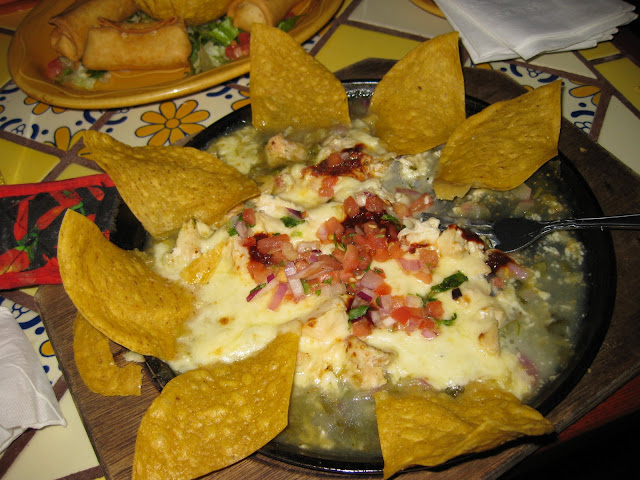 M had fried jalapeno poppers (which were really tortillas stuffed with jalapeno cream cheese) and queso dip as his entrée. Really. It's as if a 12-year-old was allowed to order his own dinner. What can I say though, the man loves cheese. 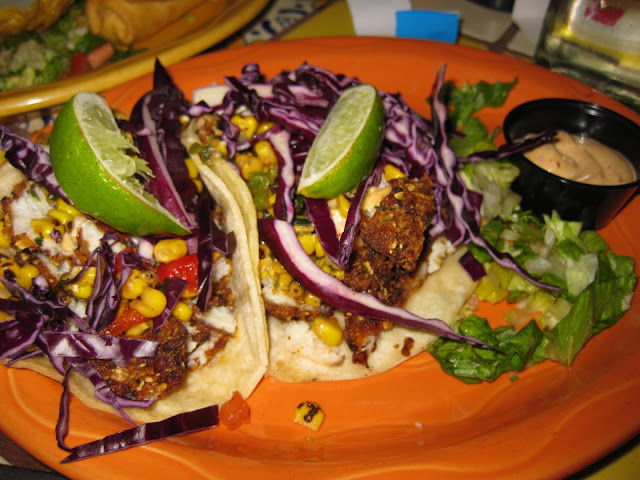 I tried the fish tacos, which were all right. The fish was a little dry and over seasoned. There was, however, a good amount of veggies on my tacos, and I particularly enjoyed the roasted corn. All in all, Margarita's doesn't get my recommendation for good Mexi. food in Portland. And if it's a good 'rita you're after, you should head down the hill to Amigo's.

For Thai take out the other night, I walked up to Pom's Thai Taste. I, of course, could not pass up the opportunity to order Panang curry (with chicken, $10.95). 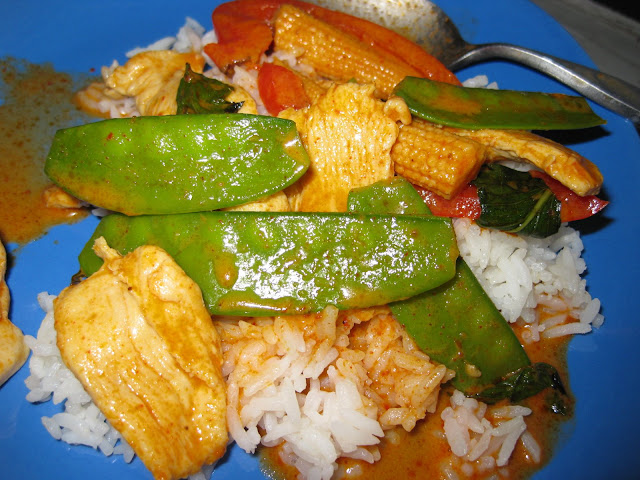 And it was delish. Lots of fresh veggies (not just peppers and onions, like so many places do).

For M., I ordered Yum Nuer ($9.95), and he was equally pleased with this salad. Thinly sliced charcoal beef comes over a bed of veggies and lettuce, tossed in a spicy and sour lime dressing. 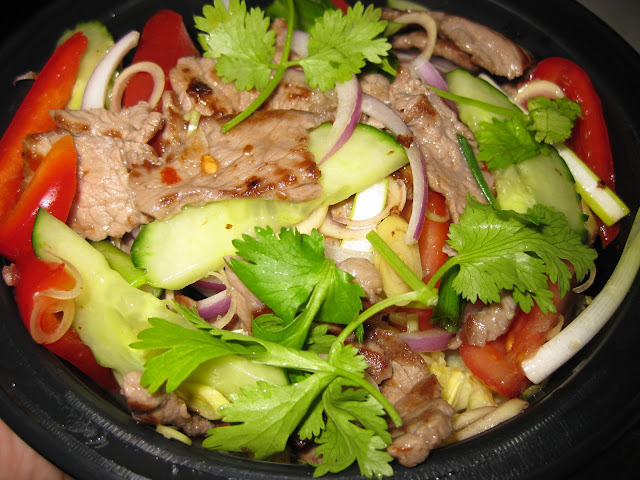 While we opted for take out, Pom's Thai Taste also looks a great place to eat in. The décor in their Congress St. location is not what you'd expect- very modern and minimalist, with a Thai flair, of course. Coupled with their $1 sushi night specials (on Monday and Tuesday nights), I am looking forward to visiting Pom's again.