While shopping for the week, M and I wanted a crock pot meal. We spotted these pork ribs on sale and decided we'd have ribs and slaw one night (that and I never can remember what cuts of beef are good for slow-cooking while I'm actually in front of the butcher case).

This recipe was inspired by one I saw on Jamie Oliver's show Jamie's Kitchen, which involved a lot of citrus zest on a big rack of ribs that he roasted in the oven. M marinated these ribs with a bunch of stuff (I was blissfully uninvolved in this step) and then we zested a lemon, lime and orange into the crocker. The ribs were covered with water and orange juice and left to do their thing all day. When it was time to eat, M. scooped out the meat (since it was falling apart!), squirted them with some Sweet Baby Ray's BBQ sauce, and baked them on a cookie sheet in a 400 degree oven for about 15 minutes, just to get them nice and hot. 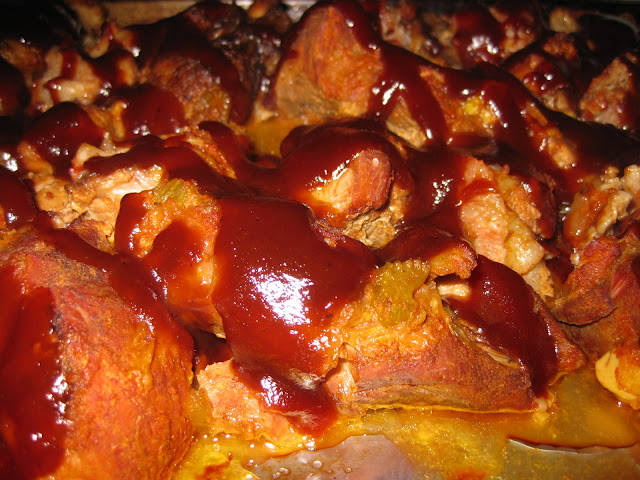 And like I mentioned in the previous post, when I came up the stairs in our apartment, I thought, mm, someone is cooking something yummy smelling. And it was us! Yes! And sure enough, it was yummy. I made cornbread from scratch and I kicked myself for not adding a can of corn - I love corny cornbread! I used to make it when I was little from the BH&G Junior Cookbook. It might have even been my first recipe. 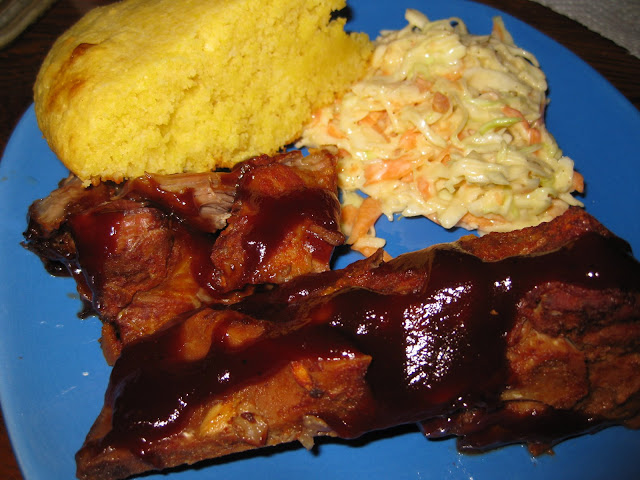 And let me take a minute to expound my feelings on mayonnaise-based salads (it's relevant, don't worry). Such salads, i.e., cole slaw, potato salad, and pasta salad, are usually terrible when purchased from your grocer's deli, where they were unceremoniously dumped from a wax-coated paperboard box from Sysco. But this doesn't have to be so; at the heart of these salads is a lot of potential. You just have to (wo)man up and make them yourself. That way you avoid all of the horribleness imparted by the industrial food supplier and add all of the yumminess that you in particular care for.

That's how it is with my cole slaw. I used to hate the stuff, until I had my friend Jesika's. I could swim in pools of Jesika's coleslaw! (OK, ew.) And she 'let me in on' her recipe: the dressing is simply made from mayonnaise, apple cider vinegar, and sugar. You just mix them together, taste it, and tweak it to your liking. Maybe add some S&P. The end result should be creamy and rich with some tang and lingering sweetness. None of that overly sweet mushy grossness, and certainly no HFCS here.

Now, I am sure to a lot of you, that this is no revelation. But I was so excited to learn to make good coleslaw. Because I love coleslaw, I just didn't like its previous incarnations. And I find this to be true for a lot of people. They think they don't like something, but really its because they've only ever had deli case or their Aunt Gladys' horrible recipe (sorry Gladys). It is freeing to be able to make food that you like, the way you like it, rather than choke down the status quo generated by the industrial food system, and for some reason, tolerated by so many of us for so long.

But in the end, maybe it's just coleslaw, after all.