Julie Would Be Proud

At the risk of being called a copycat, I was inspired by Julie Powell tonight. I made Aubergines Farcies Duxelles (Eggplant Stuffed with Mushrooms) from Mastering the Art of French Cooking, Vol. 1. And I'm glad I did. It made me realize the truth behind the statement by the NY Times review of Powell's book that Child's cooking is straightforward but labor-intensive. And I got to witness firsthand why Powell regularly didn't get meals on the table until after 10 p.m.

To make this dish, I first had to make the stuffing, which required making another MtAoFC recipe, Duxelles. Typical Julia already. So for the Duxelles: 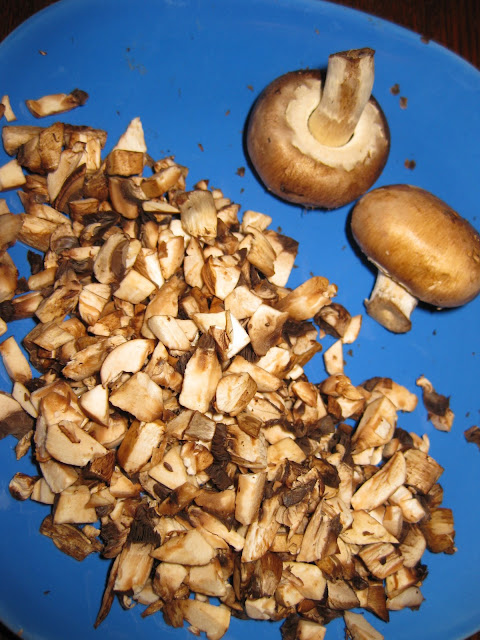 Mince some mushrooms (I used about 1/4 lb. for 2 halves of an eggplant, probably should have used more). Squeeze the mushrooms in a paper towel, handful by handful, until you've wrung all the moisture out of them. Sautee, over medium-high heat, the mushrooms, and a small, diced shallot in 2 T. of olive oil and 1 T. butter. When the mushrooms are browned (about 6 to 8 mins), season with S&P and then add 1/4 beef stock or bouillon and 1/4 cup Maderia wine. Reduce to nothing. Now, this last step, JC says, is optional, but why would you skip it?

Once you've got the Duxelles made, put them in a medium-sized mixing bowl. Slice a medium-sized eggplant (about 6 inches long and 3 inches in diameter) lengthwise and cut the green top off. Cut through the flesh, down to within an 1/4" of the skin, but not through (good luck). Do this every inch along the face of the eggplant. Sprinkle the eggplant with salt and place flesh side down on a kitchen towel for half an hour. Squeeze them gently with the towel to remove excess moisture. Drizzle the eggplant with olive oil and place in a shallow roasting pan. Fill the pan with water so the eggplants are submerged in 1/8" of water. Place under a broiler, about 4 to 5" away from the heat, and roast until the flesh is tender but not browned.

Scoop out the flesh (like a twice-baked potato!) and add to the bowl with the mushrooms. Sautee a diced small yellow onion or a diced large shallot in 1 T. olive oil. Add to the stuffing. (Are you getting tired yet? Cuz I was.) Mush up about 3 oz. of cream cheese and add to the stuffing. Whip it all together and add 1/4 t. thyme or 1/2 t. basil and 1 T. parsley. Taste and season with salt and pepper.

Stuff eggplants with the filling and top with a mix of bread crumbs and shredded swiss cheese. Baste eggplants with melted butter. Place back in the roasting pan with 1/8" of water and bake in a 375 degree oven for 20 to 25 mins. 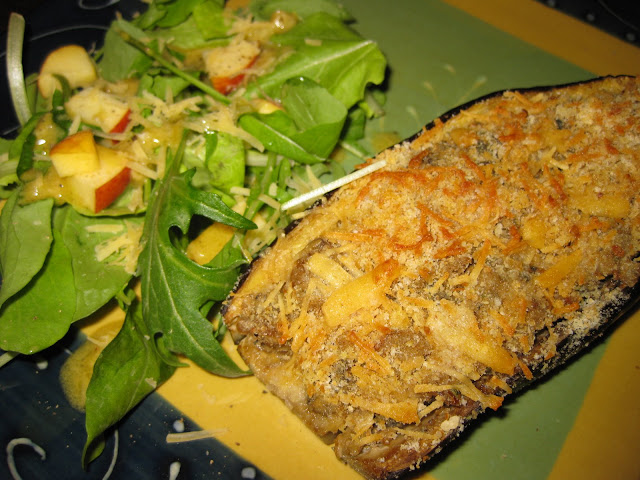 So, tada! My first Julia Child recipe. And it wasn't even that good. I mean, with all the raving in Powell's book, you'd think I'd end up with a culinary masterpiece. Ok, ok, I'll admit there were some adjustments on my part - like I don't have a top broiler, so I had to bake the eggplant instead of broiling it. The filling was good, but it wasn't like spectacular. Sigh. I even used amazing good (and stupid expensive, please keep me away from the specialty cheese shop) cheese! I feel blasphemous for even mentioning that I've had better preparations of eggplant. But on a positive note, the salad I made with mesclun mix, that amazing cheese, apples, and a mustard shallot vinaigrette was great.

I won't give up, though (don't worry, I'm not going to do anything crazy, like, say, attempt all the recipes in a year). Maybe Julia's forte is something involving meat, like seasoned with bacon or lard. I've still got my eye on that Coq au Vin recipe, so I'll be sure to give it another shot.