When I got back to Maine from my Christmas vacation, I had the hankering to make a meal using locally produced ingredients. I recently finished reading Plenty: One Man, One Woman, and a Raucous Year of Eating Locally by Alisa Smith and J.B. Mackinnon who pioneered the idea of only eating foods produced within 100 miles of their Vancouver, BC home for a year.

And while I don't think I am committing to the 100 mile diet right now (in January in Maine), I am going to try to incorporate as many locally grown and produced ingredients in my diet as I can manage (and afford). So I went over to the Portland Public Market to see what was local and in season. And I found local, organic sunchokes, also known as Jerusalem artichokes. In Plenty, they ate sunchokes in the winter as one of their first before-spring local finds. 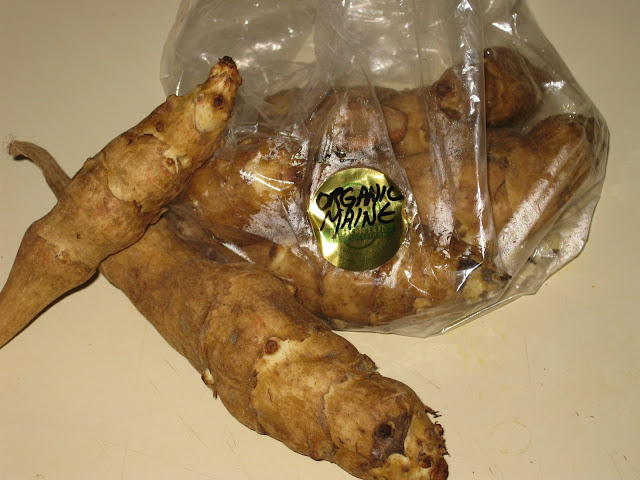 So I went back home proudly bearing a bag of sunchokes and an unidentified variety of local squash (and out $8). The Joy of Cooking told me that sunchokes aren't related to artichokes, but are the tubers of sunflowers. And a quick internet search revealed that the most popular way to prepare sunchokes is to make a cream soup of them. Done.

So I kinda made it up, but here it is as best as I can approximate...

Peel and slice sunchokes. As you peel and slice, place the denuded sunchokes in a bowl of cold water with a splash of vinegar. This will keep the chokes from discoloring.

Melt the butter in a stock pot, and sweat the garlic and onions, for about 5 minutes. Add sunchokes and stock. Simmer until 'chokes are tender. Blend until smooth, add cream and return to low heat. Season with salt and pepper to taste. 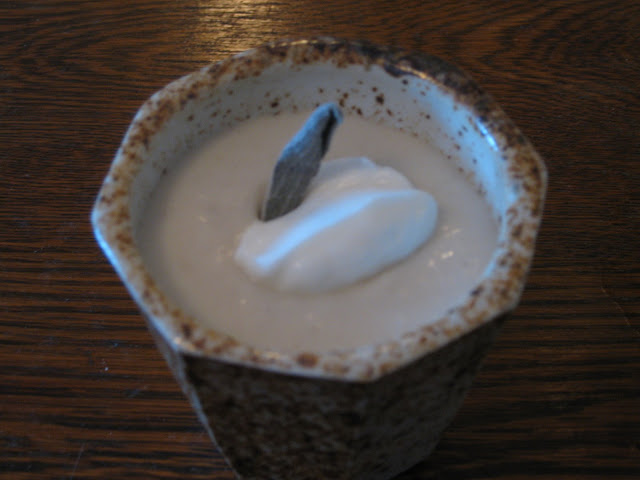 As you can see, I served this soup in a small tea cup. I recommend small portions, because the soup is quite rich and best savored in little sips. I garnished it with sour cream and a sage leaf, but it stands alone just fine.

To round out the rest of my local, winter meal, I took inspiration from my friend Liz again and decided to make squash ravioli. Originally I intended to use the squash I bought, but then I spied my *old* Halloween pumpkin. I'd always intended to use it as food after its decorating purposes were served, but now I think I should have gone with the fresher squash.

But anyway, I roasted that baby with butter, maple syrup, cinnamon, and salt and pepper. When it was soft(ish), I combined it with some Parmesan cheese and sauteed hot Italian sausage from Whole Foods. The pasta was made from 3 eggs and 2 cups of Semolina flour and rolled out by hand (woof, I vowed to get a pasta roller after this latest experience). The ravs were served in a browned butter and sage sauce. 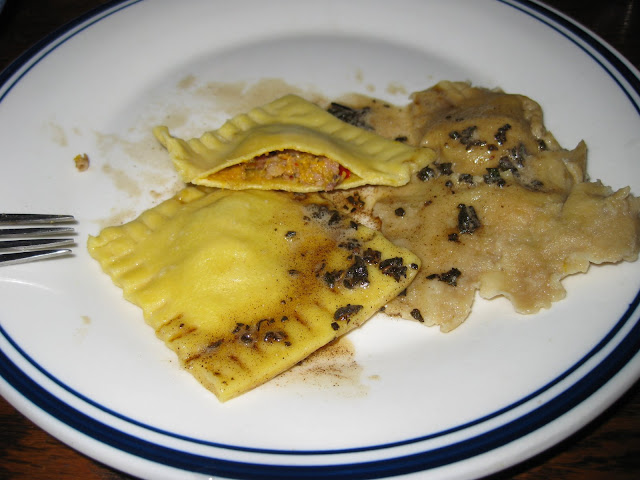 Oh yeah, some ravs are brown because M. added a walnut paste to the dough. He loves adding things to pasta dough, and I convinced him to only add it to half. The nuttiness in the pasta (and the kitchen, ha!) complimented the filling nicely.

So after this successful meal, I am going to further my local wintertime eating mini-experiment by ordering some meat and produce from the every-other-week Portland Farmer's market. I'll be sure to let you know how it turns out.