The Next Big Thing 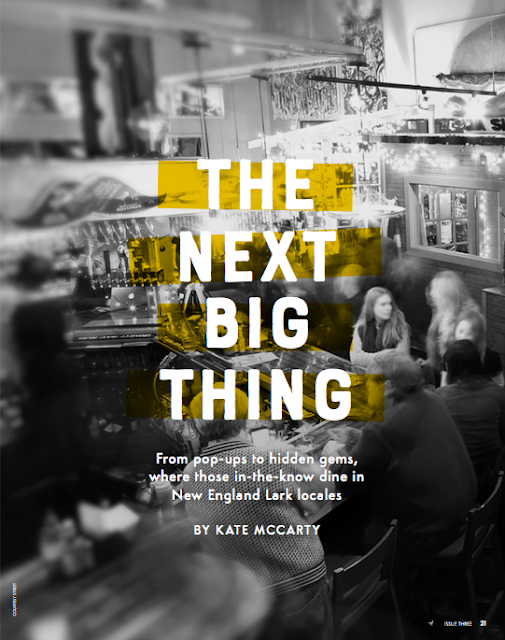 Today’s diners looking for a restaurant recommendation in a new city often want—and even expect—a novel experience, a quirky environment, or something that makes them feel clued in to the next big thing—and sometimes all three at once. Many of Lark’s destinations deliver just that.

Things that pop-up in the night

Salem, Massachusetts, is known for its pop-ups and their offshoots. On the savory side, for example, we just can’t resist the open secret that is Back Alley Bacon with its pork-centric street food (look on Facebook for its Wednesday night menu).

Feel the need for sweets instead? On weekend nights, get directions to Goodnight Fatty and snack on what some consider the best type of cookies around—ones with crispy edges and gooey centers fresh from the oven—aka “fatties.” Owners Erik and Jennifer Sayce say the idea for their business was born out of their own craving for warm cookies on their walk home from dinner one night. Flavors change each week and range from fruity to decadent, with the signature flavor Midnight Fatty, a chocolate cookie with chocolate chips, pecans, and toffee bits, always a bestseller. And naturally, a bottomless glass of milk is available. Goodnight Fatty began popping up in coffee shops and breweries in 2016, while Erik and Jennifer got a feel for consumer demand and searched for retail space. In 2017, they found their own space. The unexpected and somewhat hard-to-find location—an unassuming conference room rented from a media company in a building down an alley behind Rockafellas and Ledge restaurants— maintains the in-the-know pop-up vibe.

Customers love pop-ups partly because of that feeling of being in on a secret, according to Jennifer. “They also know that they are supporting a fledgling business and getting a unique experience,” she adds.

Another popular pop-up, Rover Bagel outgrew borrowed spaces in Salem as well and found a permanent home in Biddeford, Maine. The bakery is known for its crackly Montreal-style bagels, which are baked in wood-fired ovens. Before moving, the owners had used Bambolina’s ovens in the mornings when the restaurant wasn’t open.

What will the next pop-up sensation be? Check in at Notch Brewery, the Far From The Tree Cider tasting room, and Deacon Giles Distillery, which often host new pop-ups, and you might be one of the first to discover it.

The world at your fingertips

You might think it’s hard to execute food from all over the world well, but Street does just that. This casual eatery’s menu of global street fare reflects influences ranging from Thai and Korean, to Italian and Mexican, served up as what Chef Joshua Lanahan describes as “simple food of the people.”
To find this hidden gem, don’t worry when your GPS guides you to the back of a nondescript strip mall in Portsmouth, New Hampshire. Inside, owners Joshua and his wife, Michelle Lozuaway, who handles the front of the house, have transformed the space into a cozy bar and restaurant with spray-painted graffiti and colorful murals.

On the inventive cocktails menu, the Unbeetable is a customer favorite: beet infused vodka with muddled cucumber and mint, chili simple syrup, and lemon, topped with ginger beer. In short, the perfect combination of earthy and spicy.

And don’t skip dessert—the Italian zeppole are expertly fried, dusted with powdered sugar, and served in a brown paper bag.

Metzy’s Taqueria—the first food truck in Newburyport, Massachusetts—was an instant hit when the truck parked near the beach on Plum Island in 2014. (The route is expanding to include the nearby beaches of Salisbury and Amesbury.) Owner Erik Metzdorf quickly realized he needed to expand his commissary kitchen space to handle the demand for Chef Brad DeLibero’s take on Mexican street food.

Metzdorf found space at the town’s train station and launched Metzy’s Cantina, which allowed for year-round dining. This is not some quaint historical train station turned hipster hangout—this is an active, commuter rail station. Metzdorf has worked hard to transform the industrial space into a bright and warm cantina. “We took a blighted piece of public property and turned it into something the community can be proud of,” says Metzdorf. “We created an engaging gateway to the city.”

The cantina’s ample kitchen space allows the restaurant to augment tacos and burritos with soups, salads, and daily specials. Start with sweet potato and black bean hush puppies served with chipotle sour cream or the slow-cooked pork belly ribs finished with maple bourbon sauce and served with sweet potato fries. Wash down a pork belly taco, lined with shredded cabbage and piled high with crispy cubes of fried meat and a mango habanero salsa, with Melt Away Session IPA from Newburyport Brewing Co.

This will float your boat

Everyone who visits Kennebunk, Maine, expects two things: lobster and a good view of the ocean. While many restaurants serve up both, one in particular takes waterfront dining to the next level—The Spirit of Massachusetts Restaurant, a historical schooner turned floating restaurant. Once an educational nonprofit’s training vessel, The Spirit of Massachusetts languished in Portland, Maine for a few years until it was discovered by Dwight Raymond, the owner of The Pilot House, a local favorite in Kennebunk’s Lower Village. Dwight acquired the dilapidated schooner and worked with his son, Nick, to retrofit into a restaurant, which took about a year and a half. Docked behind The Pilot House and next to First Chance Whale Watch, The Spirit opened in the summer of 2016. Its tall masts rise above all others, a beacon for thirsty sailors and hungry travelers alike.

You enter the restaurant via the metal gangway, sometimes a steep descent when the tide is low. The boat’s masts, booms, and rigging are all still in place but now support a tent that provides shade. Sloped to follow the curve of the boat’s deck, a polished wood bar runs the length of the deck. Descend a wooden staircase to the main cabin, which serves as the dining room. Choose from cushioned banquette or wooden bench seating around tables that are bolted to the floor. The aft cabin is a fully functional kitchen, with steamed lobsters passed up through the hatch when an order’s up.

The Spirit’s menu is primarily seafood, with a raw bar selection of local oysters and clams on the half shell, shrimp cocktail, and chilled lobster tails. Some diners go casual with a pound of peel and eat shrimp, liberally dusted with Old Bay, and slices of Andouille sausage. Others channel Kennebunk chic with ahi tuna poke and seaweed salad.

Maine craft beers, like Sebago Simmer Down Session Ale, are on tap, and the cocktail menu sports beachy options like Painkillers and Dark and Stormys. Owner Kylie Raymond says, “There’s really nothing like sitting on the deck of a boat in the summer—the sea breeze, having a cocktail. It’s the number-one reason people visit us.”

The Spirit of Massachusetts Restaurant: 4 Western Avenue, Kennebunk, ME
This article was originally published in Lark Hotels' magazine in May 2018.