Ed. note: Eaux is temporarily closed while it moves to a bigger location. Chef/owner Evan Richardson is also opening Cafe Louie in South Portland. Check out my post on New Restaurants in South Portland, Maine for more information about that project.
Former food cart Eaux opened its brick and mortar last night, and I was particularly excited about this move. I'd always wanted to try the Cajun-themed cart, but never managed to catch it (I guess my days of hanging for hours at breweries have waned).

So I walked down to the Old Port last night, a particularly nice night, to have dinner at Eaux, now operating in the former home of Crooners and Cocktails on upper Exchange Street. 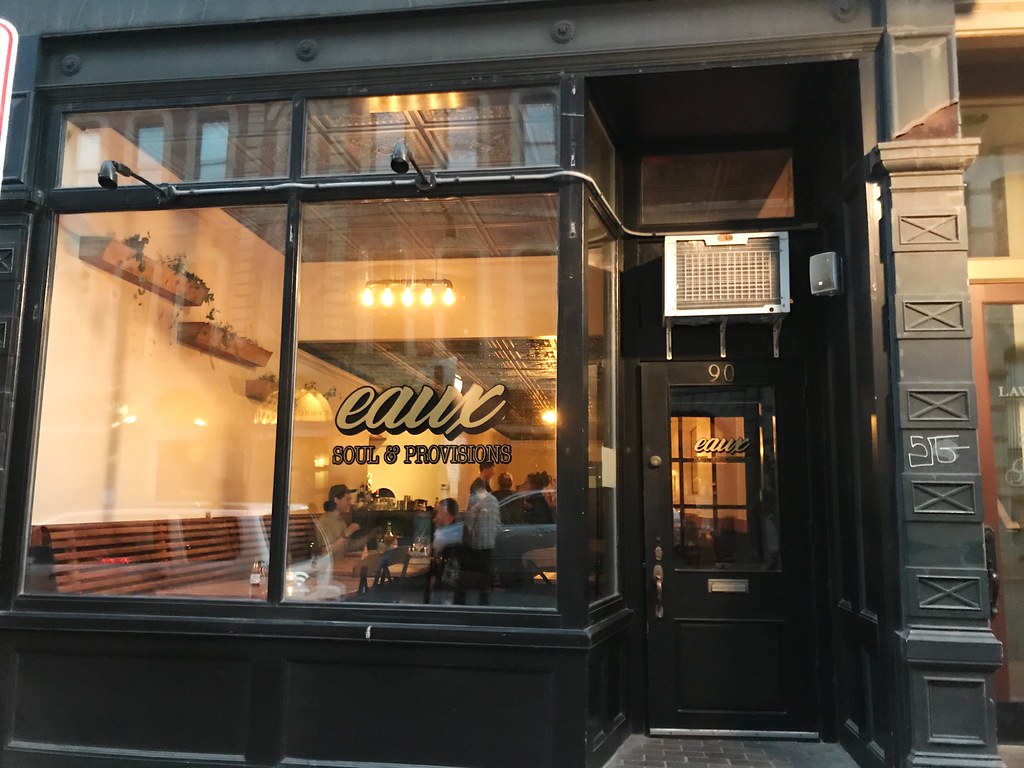 Eaux's decor is pretty minimalist, something I figure they'll embellish as they go, but the space is nice with big windows and a pressed tin ceiling. The tables in the back get a little dark, but it could be seen as cozy. 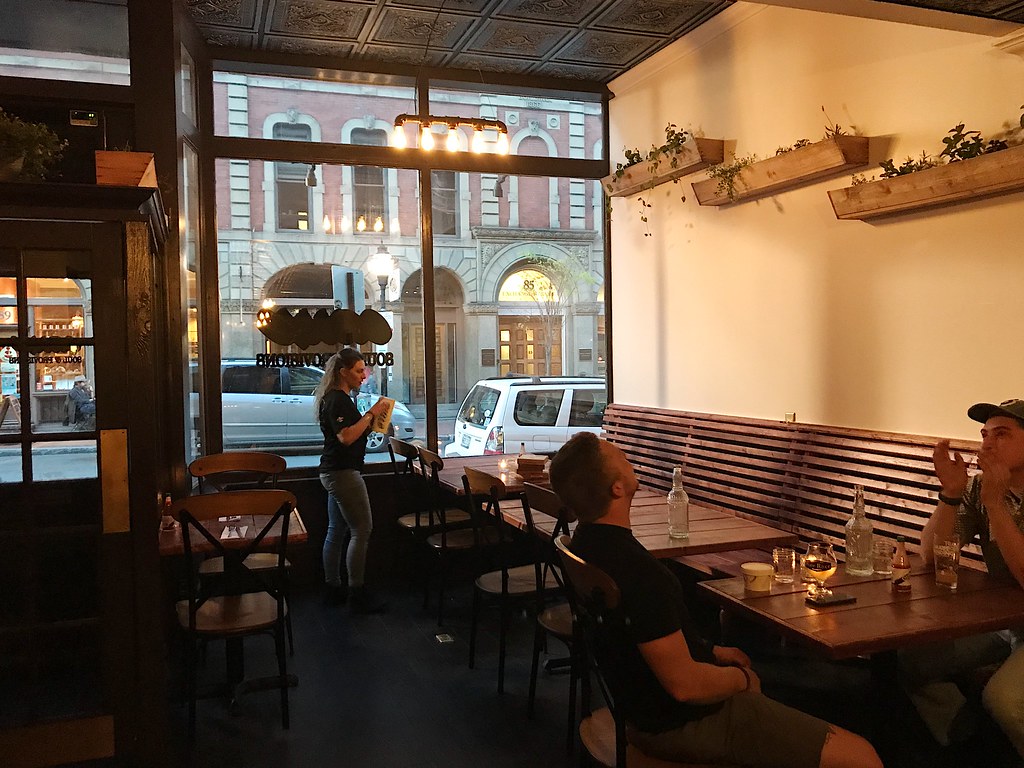 There's no host stand, but we were greeted immediately by a waitress, one of two, who ended up being our server. We sat ourselves at a two top and she dropped menus quickly. I ordered a daiquiri from the cocktail list—filled with New Orleans classics like Sazerac and Hurricane.

A. ordered a Goodfire draft beer from a list exclusively filled with local beers, representing the breweries that hosted the food cart, from Industrial Way to the East Bayside breweries. 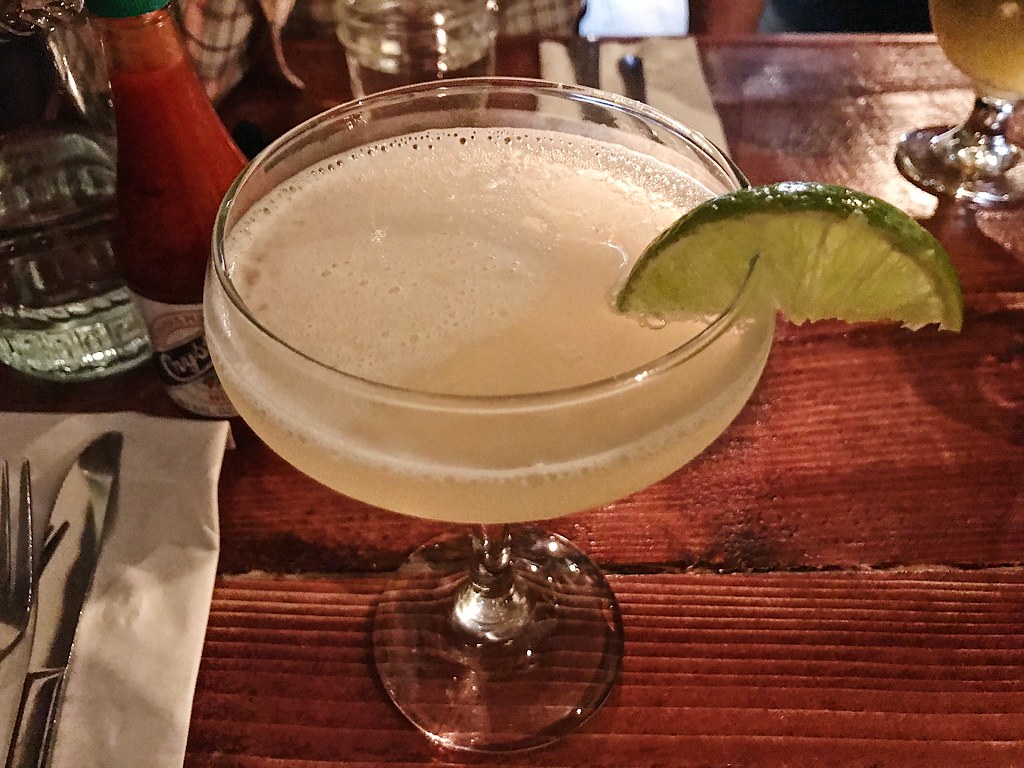 The food menu offers 6 starters and 6 entrees, and I knew from social media posts that I was having the chicken and waffles. So I ordered a few plates of vegetable snacks to round out the meal.

I didn't know what to expect with the chilled Brussels sprouts ($8), a salad of halved Brussels, mustard greens, cider vinegar, and sassafras. At first I thought it was strange, but then found it oddly compelling. It was tangy, creamy, and crunchy... but you've got to like Brussel sprouts to enjoy them in this preparation versus the oh-so-popular fried version. 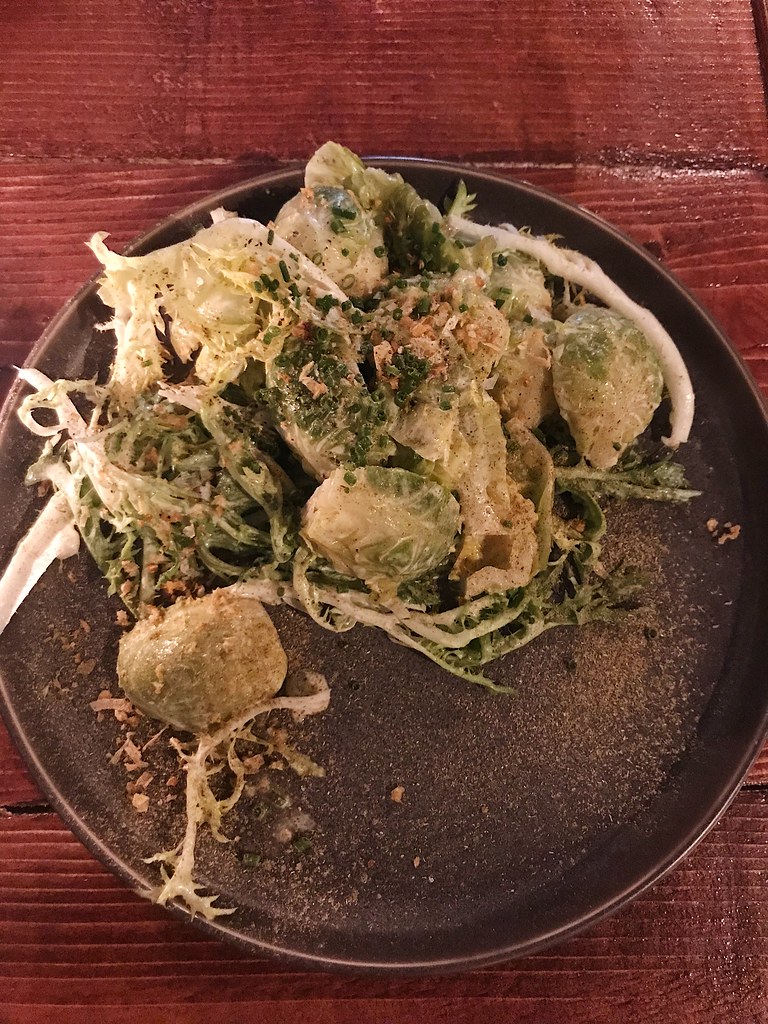 The crispy yams ($6) also impressed, indeed crispy and chewy, served with a sweet roasted onion puree and a horseradish cream sauce. Boiled peanuts, a farro salad with shrimp and rhubarb, and fried butter beans are other snacks well representing the Southern genre. 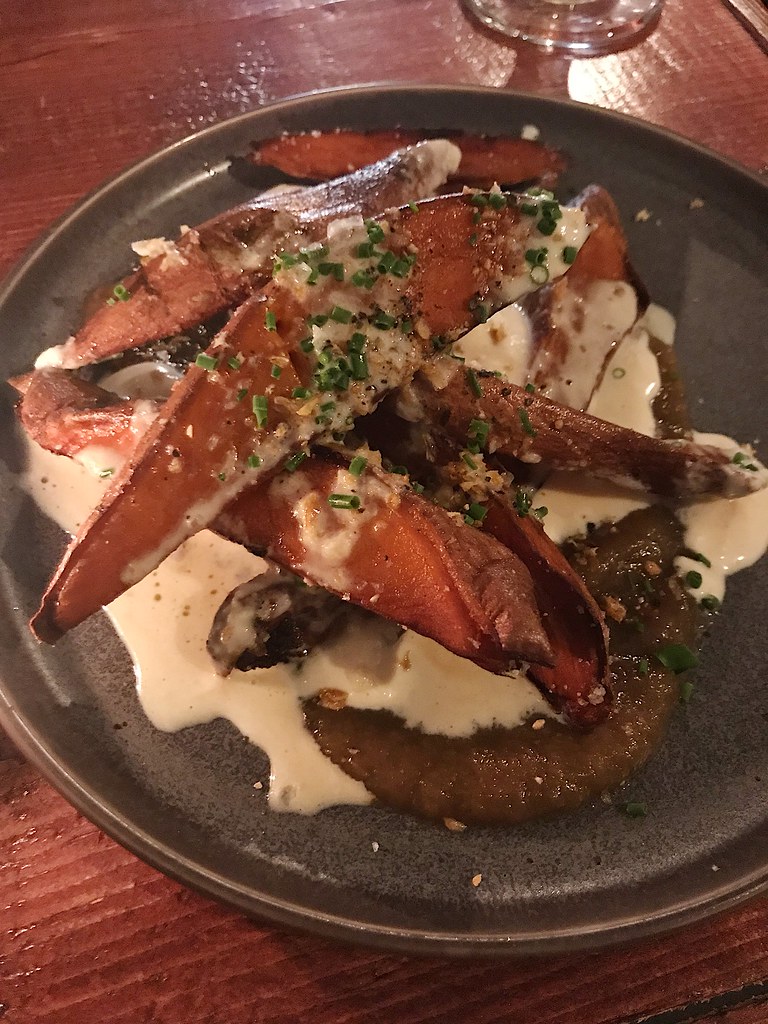 After a pleasant break—not too short, just long enough for me to wonder if there was starting to be an issue—our entrees arrived (I don't think there was an issue, I think we've all just become accustomed to having all our food arriving all at once.) A. enjoyed his gumbo with shrimp and hake, spicy and served over rice. 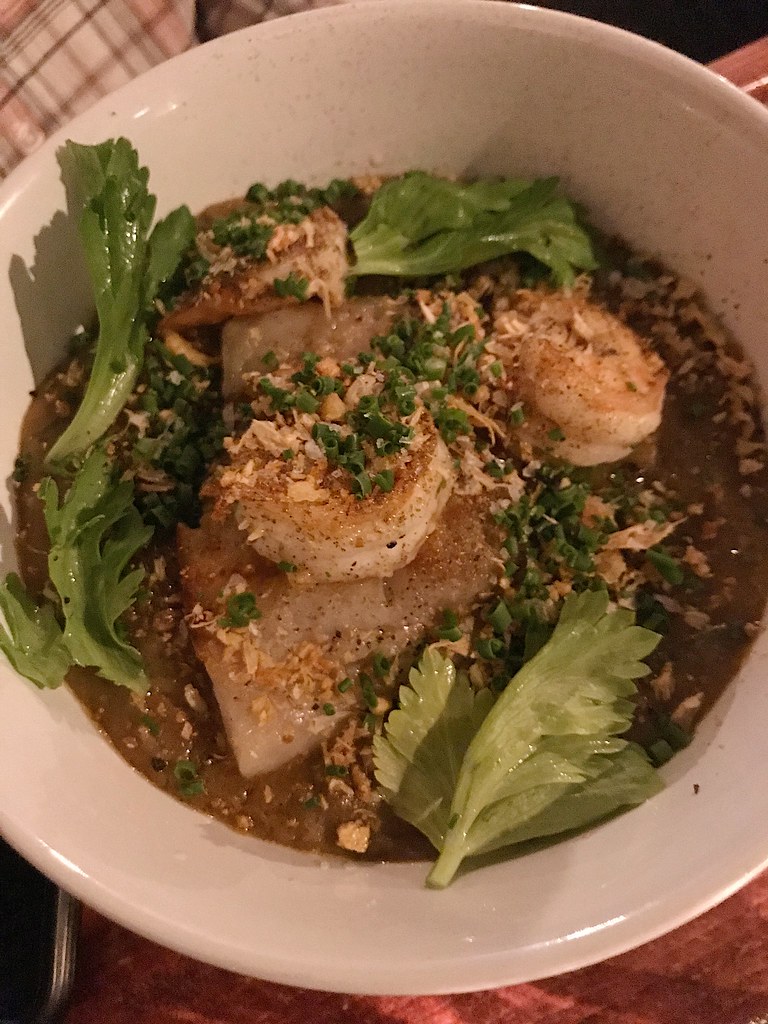 I loved my chicken and waffles ($14), with spicy pickled peppers, apple slices, and fried sage leaves. The most striking part was how much flavor the fried chicken had—the breading was pleasantly salty and the chicken was very tender. 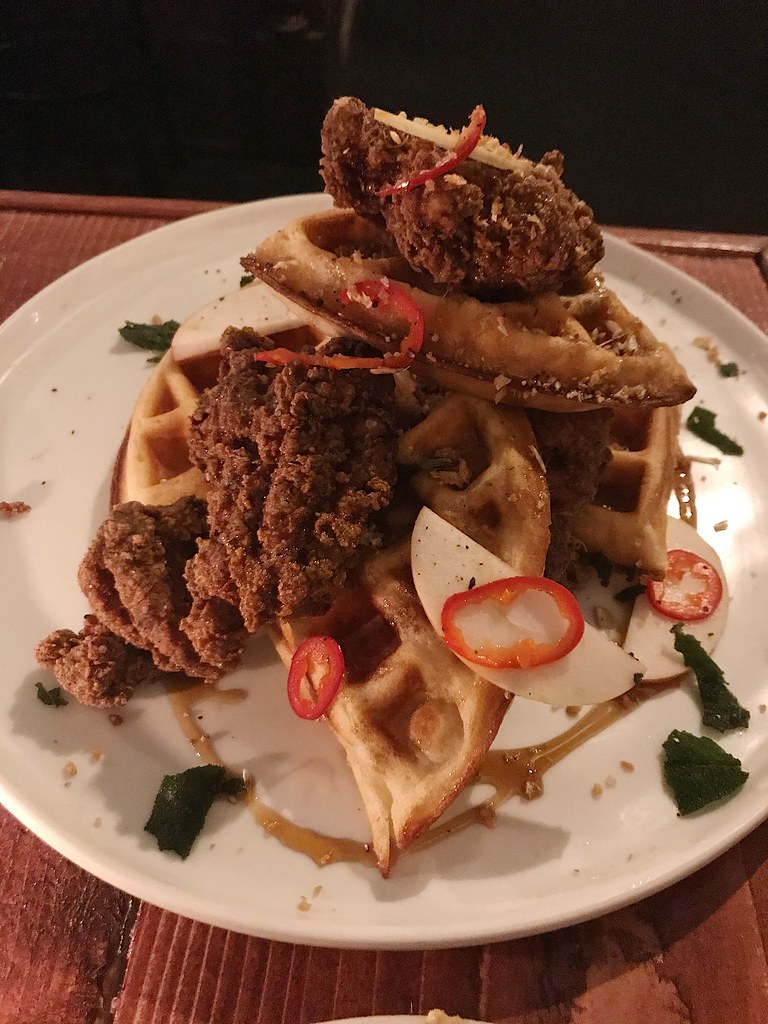 Eaux is a welcome addition to Old Port dining options, and I'm impressed how easily the chef and staff transitioned from a one-man outdoor show to running a full restaurant. Stop into Eaux for a taste of the South, bringing something different to Portland.