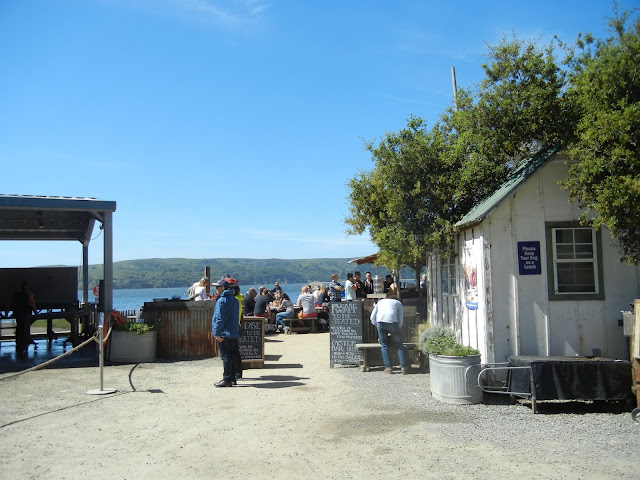 Two weeks ago, I jetted off to San Francisco to spend a week with my boyfriend, his brother, and his brother's family. It was the perfect antidote to Maine winters, something I've realized that I need after 8 winters in this lovely, but at-times frigid state. Spring (break) fever is real and contagious. Since spring in Maine (or should I say "spring") is lacking to this somewhat-southerner, heading south where there's green grass, sunny days with warm breezes, and loads and loads of flowers helps me retain my sanity until Maine spring fully kicks into gear...in like June.

We arrived on a Wednesday night, and after generously taking the next day off to entertain us, everyone had to go back to work on Friday, which left A. and I to our own devices. We hopped in the convertible (yesssss) Saab and headed for the coast. My mission: oysters al fresco.

My friend Tessa had recommended checking out Hog Island Oysters near Point Reyes, where you can have oyster picnics right by the water. As soon as I'd heard even those limited details, I'd put that activity on our agenda. 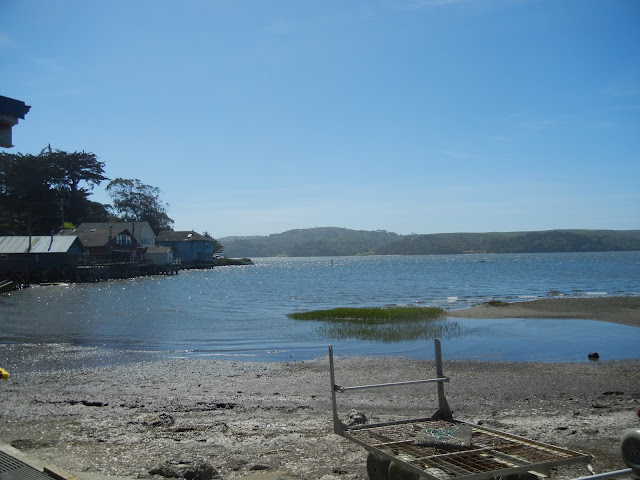 The odds were in our favor that day, since while a picnic requires advanced reservation, the oyster "boat" bar was open that day and did not. (Note: if you plan to visit the farm, they have since started a new reservation-only policy for the bar as well.)

Both the bar and the picnic tables are located on a slice of land between Route 1 and Tomales Bay, where the oysters are grown. You eat and relax next to the oyster processing facilities, where men in Grundens and sea boots toss around giant bags filled with shells, hoisting them, emptying them into a sorter, and at times even whacking the bags with baseball bats. It's definitely a working farm and the workers serve as "edu-tainment" while you're eating. 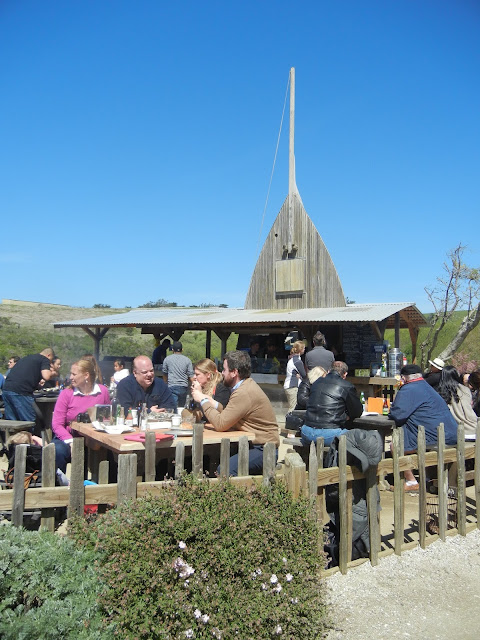 The oyster bar serves the Hog Island Sweetwaters on the half shell and broiled, as well as some non-shellfish offerings like charcuterie and some salads. We had a friendly server offer to take our order while we stood at our communal high top table, but you can order at the bar as well. A. and I ordered both the raw and broiled oysters and a charcuterie plate to make it a substantial lunch. Some bottles of IPA from local Drake's Brewing Company rounded out our meal. 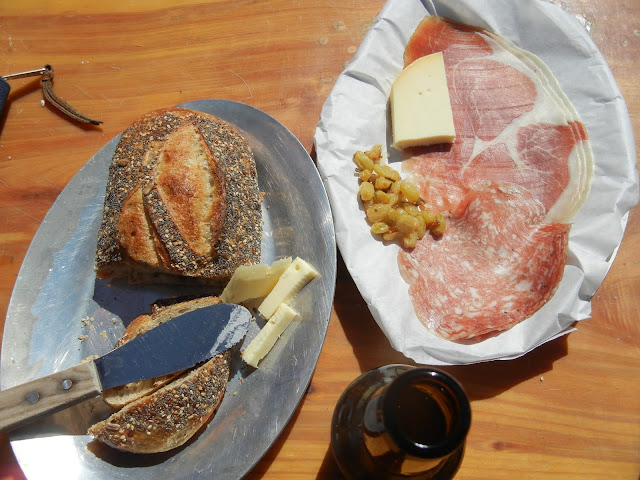 The Hog Island Sweetwaters were instantly my new favorite oyster, offering all of the things you love about oysters and avoiding the flavors that can turn people off of them. They were clean, well-shucked, and incredibly sweet with very little briney or funky seaweed flavors.

The broiled oysters were amazing as well, slightly larger than those served on the half shell and topped with a BBQ bourbon chipotle butter. They disappeared quickly, all warm and buttery, but we stopped by the oyster window on our way out to order a few dozen to take home with us for a Saturday afternoon grill out. 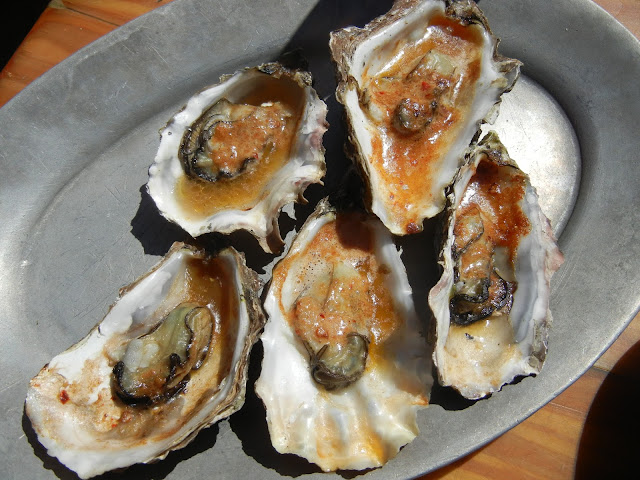 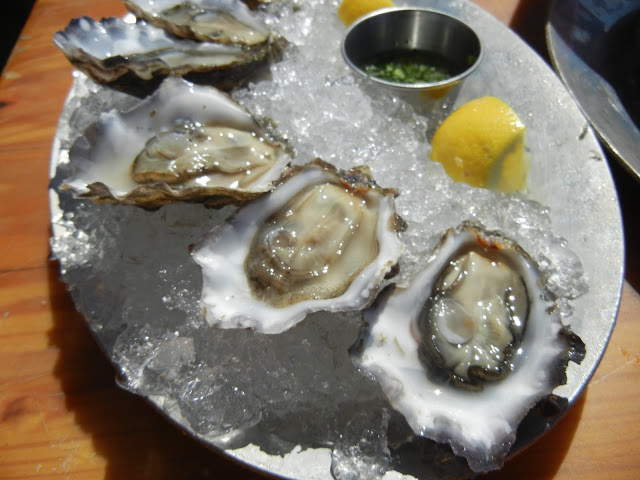 The next day, we shared our newfound love of grilled oysters with A.'s family - of course, being hip to all things hedonistic, they were already experts at home-grilled oysters for a crowd. After exhausting our enthusiasm for shucking, we decided to grill up the remainders, recreating the spicy garlic butter ones we'd had the day before.

Although it may seem more complicated, preparing grilled oysters can be easier than shucking raw ones, at least for those among us who aren't expert shuckers. By heating the oysters for a while, they steam and soften (ok, ok, die) and are much easier to open than when they're alive. Lacking a barbecue grill, we improvised with the broiler and it worked great. Later we moved on to topping the oysters with garlic butter, arugula, and Parmesan cheese, all of which went superbly with local sparkling rosé and ample amounts of sunshine. 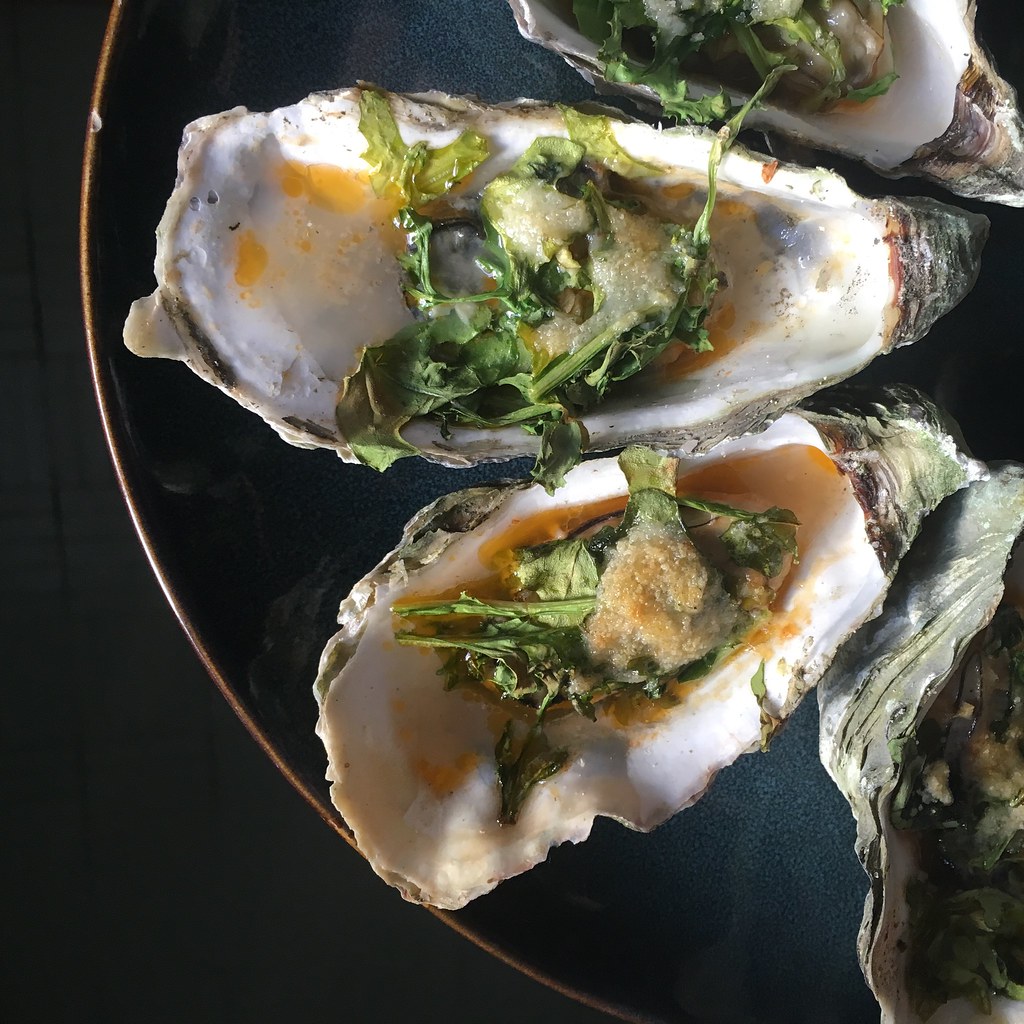 To make BBQ bourbon butter:
Combine all ingredients in a bowl, mix well. To save for future use, scrape butter onto wax paper, close wax paper around butter, and shape into a log. Freeze for up to 6 months for best quality.

To make barbecued oysters:
Preheat oven's broiler or grill to very hot (500*F). Spread oysters on a broiling pan and place in oven (or directly on grill surface) for 5-10 minutes or until several have popped open. The oysters should be very easy to shuck; if not, heat until they are.

Shuck oysters, leaving meat in cupped half of oyster shell. Add 1-2 tablespoons compound butter and return to heat source. Grill for several more minutes, until butter has melted and is bubbling.