Portland's newest alt weekly, DigPortland, closed unceremoniously this week, and as a contributor to their Food & Draaaanks section, that means I lost my monthly column. While I have plenty of writing to do (see book manuscript deadline approaching quickly), many of my fellow freelancers unwillingly lost their bylines, and my editor and the staff writer both lost their full-time positions.

I don't agree that Portland wasn't big enough for two alt weeklies*, and I'm sad that there are fewer platforms for talented Maine writers. I was happy to be a part of creating something that diversified the media coverage in Portland and that helped to support artists, musicians, chefs, and food producers by highlighting their efforts.

All of this is a roundabout way of saying, I'd written a column for this week's paper, and it won't be published. So you get to read it here!

With my research into the history of alcohol in Maine, I've obviously been thinking a lot about booze. This "women and whiskey" trend in national publications has caught my attention and helped plant the seed for the Portland Spirits Society, a women's spirits appreciation group. We are having our first event, a private tour and tasting, in a week at Maine Craft Distilling (rsvp on facebook). If you can't make it, stay tuned; an announcement about our next event is coming before the end of the week.

*I mean as far as coverage for two papers; I do not mean to comment on the financials. I don't know anything about that. 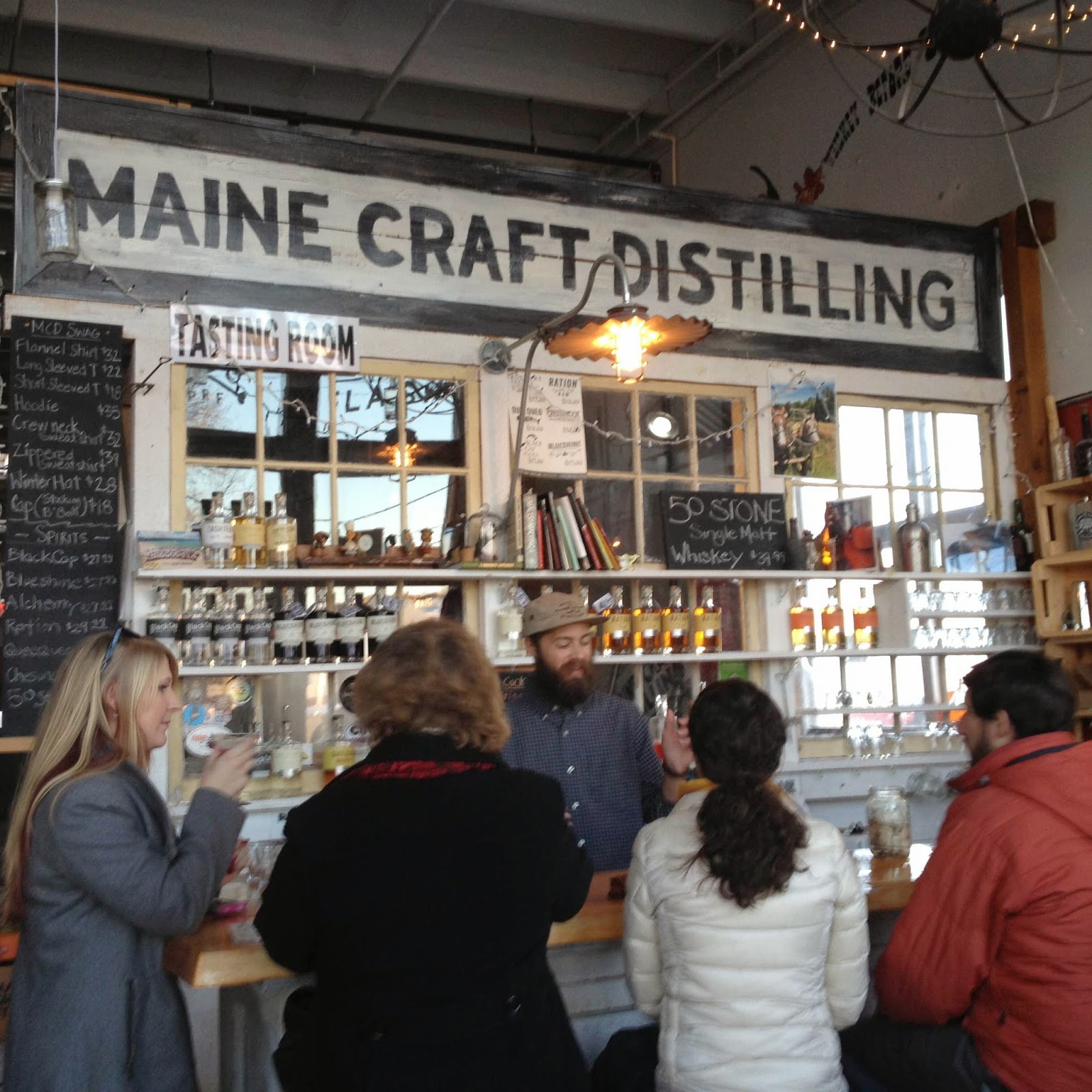 On a recent weeknight evening, similar scenes were happening behind the steamy windows in two adjacent East Bayside warehouses: Inside Maine Craft Distilling, a group of men and women from out of town sampled small pours of craft spirits. Karen Farber, co-founder of the business, tended to them, speaking knowledgeably about distillation, filtration, and flavor profiles. Next door at Rising Tide Brewing, co-founder Heather Sanborn waved goodnight to her staff as she headed home for the day. Behind the bar, Shonee Strickland, who is in the midst of opening her own brewery in Biddeford, filled in for tasting room manager, Stasia Brewczynski. Strickland poured me a Skipper, a hopped session ale, and then tended to a group of women next to me, explaining the different styles of beer available on tap.

That you might find women on either side of the bar at a brewery or distillery should come as no surprise. Since the industry’s inception in the late 1980s, women have come to occupy all positions within the production, marketing, distribution and sale of craft beer. And in Portland, you’ll find just as many women as men enjoying porters at Novare Res and saisons at Oxbow.

The local craft spirit industry is a bit behind that of craft beer when it comes to the number of women in its ranks. But craft spirits today are following the same growth rate as craft beer in the 1990s. Currently, there are fewer craft spirit producers and consumers than craft beer, and of the craft spirits crowd, women are a minority. Ideally, we can all agree that we’re finished with the stereotype that women don’t enjoy craft beer. But do we still need to shake the perception that barrel-aged spirits are a man’s drink?

Forbes magazine recently triggered a wave of think pieces on gender and liquor with their assertion that women now make up 37% of whiskey drinkers in the US, up from 15% in the nineties. Apparently the Cosmo is out and Canadian Club is in. In an attempt to learn what women in Portland think of brown spirits, I asked Maine Craft Distilling’s Karen Farber how women react to her products.

“We’re in a neighborhood of 3 breweries, and we get a lot of beer traffic,” Farber told me. “And for every woman who says, ‘oooo, this [spirit] is too strong,’ there’s one that suffered through a beer tour and is excited to come in here.” In particular, she finds a growing number of young women are interested in barrel-aged rum and whiskey.

Women have always played a role in the manufacture, distribution, and consumption of whiskey. As detailed in Whiskey Women: The Untold Story of How Women Saved Bourbon, Scotch, and Irish Whiskey by Fred Minnick, Laphroaig, Bushmills, Johnnie Walker, and Maker’s Mark have all had women as distillers or significant stakeholders. At home, whiskey was historically used as medicine for everything from constipation to fatigue and was administered to the ailing by women.

So why the splash surrounding Forbes' recent statistic? Part of it is marketing, as corporations stand to profit if they’re ahead of trends. More women are drinking whiskey? Great, let’s brand “Skinny Whiskey,” and promote it as low-cal. The other part is the very real notion of a “boys club” in craft beer and spirits. How else to explain the craft beer names, “Tramp Stamp,” “Raging Bitch,” and “PD” (where the illustration lets you know they mean “Panty Dropper”).

Fortunately, none of these are Maine beers. And thanks to the all-female Maine Beer Mavens, there’s a place for women to explore their love of craft beer in a novice-friendly environment. The recently launched Portland Spirits Society intends to do the same thing for women and whiskey. Beer Mavens co-founder Lora Burns and I are organizing tastings, tours, and educational events for wannabe whiskey aficionados.

National interest in craft spirits is growing among both men and women. While Maine may be a little further behind in the number of small distilleries or spirit-centric bars, we excel in entrepreneurialism and access to agricultural products to ferment. So while the rest of the country may be just learning that women like whiskey, we in the Great White North have always known that to be true.